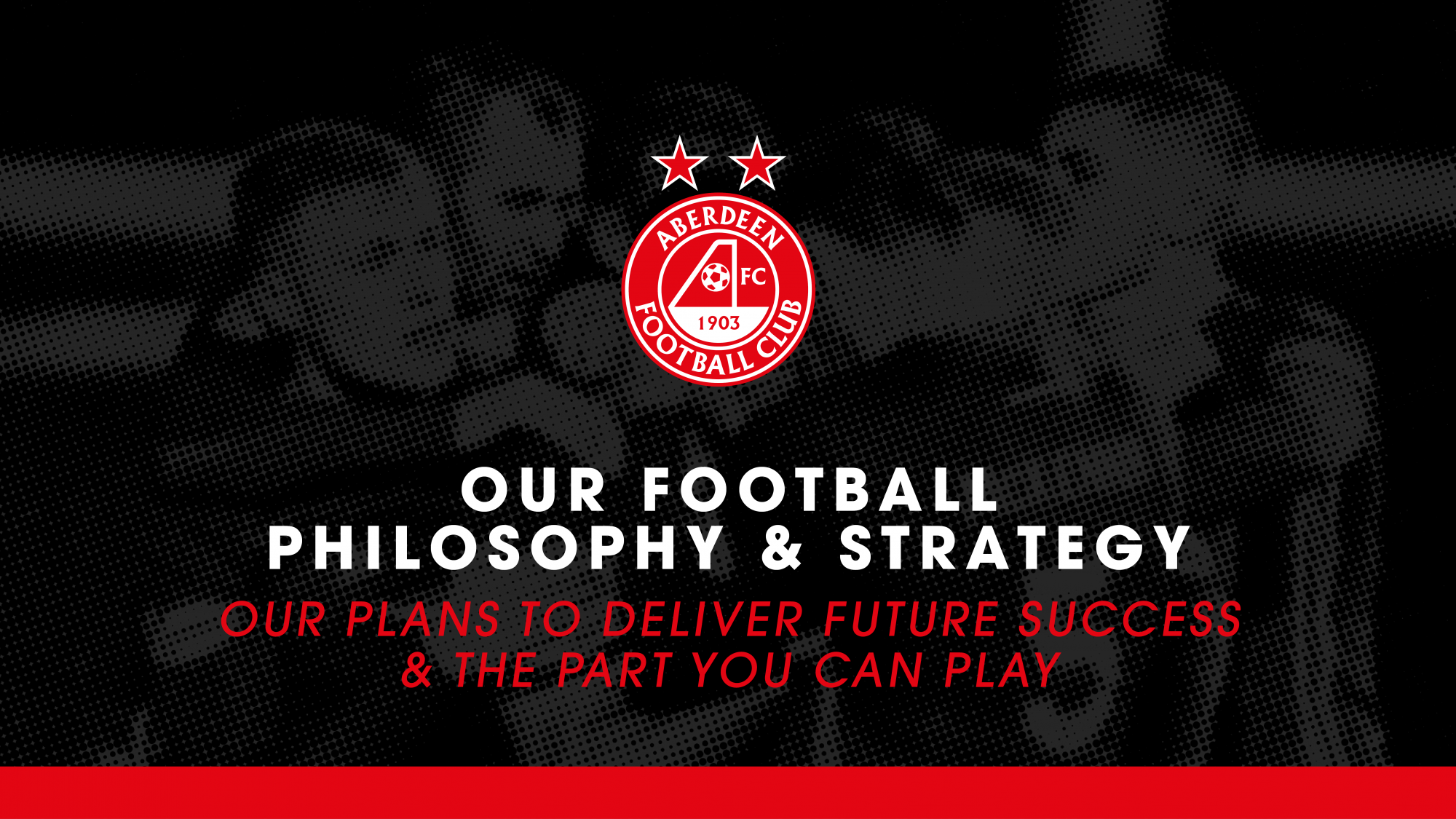 As preparations pick up pace ahead of the 20/21 season with pre-season training well underway, Aberdeen Football Club has today unveiled its playing philosophy and refreshed football strategy to excite Dons supporters ahead of the new campaign.

The Club is aiming to inspire fans with an exciting brand of football that has its roots in homegrown talent. The philosophy sets out how the Club will strive to produce winning performances that get supporters up off their feet, with intensity and pace. Adopting many of the principles which have brought the Club successes over the years, the philosophy is about creating a recognisable style of play that is firmly centred around the development of homegrown talent.

Steven Gunn, director of football operations at AFC, explained; “We have stated our ambitions, and this is all about how we are aiming to make them a reality. Many of the principles are already in play, particularly in regards to the development of young players, where we already have a strong homegrown core, made up of Academy players and exciting talents recruited from elsewhere, like Lewis Ferguson.

“We have a clear plan that everyone in the football operation is working towards, from the youngest Academy player right through to all of the support staff and, ultimately, to the team that takes the field on a Saturday.

“This has been a time for reflection and one thing that has shone through, in terms of the #StillStandingFree campaign, is that we are all in this together and we want every supporter to feel part of the football side too. That’s why we are sharing this today.”

The Club is building for the future through all elements of its football operation. This includes creating a visible player pathway for the youngest of the 150 youth academy players, right through to the first team squad; broadening its recruitment and scouting to maximise investment and unearth hidden talent and taking a strategic approach to player development from the day a player arrives at Cormack Park. This is underpinned by an energetic and ambitious team of staff across professional and academy programmes who provide a best-in-class coaching and performance environment.

The football budget is largely made up of season tickets and walk-up ticket sales. The funding available fluctuates based on the success of the team and external factors, outwith AFC’s control, such as its cut of the central SPFL broadcast deals.

AFC Chairman, Dave Cormack, thanked fans who are helping the Club to deliver this strategy through their purchase of season tickets and AberDNA membership and announced that there were now 6,100 subscribers to AberDNA, an increase of 10% since the outbreak of COVID-19

He said: “Since its introduction in 2018, AberDNA, thanks to fans, has contributed £2million to the football budget – that’s money we wouldn’t have had otherwise. This additional revenue stream is wholly ring-fenced for the football budget. It is not reliant on results and performances on the field, in the short term, but aimed at building long-term success.

“The support we continue to receive through season tickets allied with the contribution that fans make in AberDNA helps close the gap between us and teams which can draw upon a much larger fanbase and therefore greater revenues from season tickets. It’s a contribution towards levelling the playing field that has allowed further resources to be directed to, not only the first team, but also towards sustainably improving the infrastructure that sits behind what we see on the pitch.

“We have been humbled by the increase in AberDNA membership and that so many supporters have renewed season tickets, despite the challenging circumstances we are all facing. These unprecedented times present a real threat to Scottish football and to the Club we all love. But we must look to the future, confident that we have the resilience and creativity to come through this stronger. This is why we’ve been working to adapt our plans to be well-positioned for when we get back to playing.

“We may be fighting for our sustainable future right now, but we still have longer-term aspirations with every intention of seeing them through. These are competing and winning at the highest level possible, bringing silverware back to share with our supporters, our city and our region.

“That’s why, today, we are outlining our strategy to build for the future and why we need the support of our fans more than ever. A further 1,000 AberDNA members would add £200,000 to the football operation. With 5,000 additional members or season ticket holders, just imagine what we could do?”

You can play your part by joining the many Dons supporters who have already signed-up for a season ticket for 20/21. Sign-up by Friday 10th July and you can spread the cost over 6 months for no fee with AFC covering the interest costs. We will also provide the difference between full pricing and early bird pricing back as TicketCash credit to use on future season tickets or match purchases if you are signed-up by the extended renewal deadline of Friday 10th July!

You can make even further savings on your season ticket by becoming an AberDNA member, Premium & International members also receive a free replica shirt in return for their support of the football operation!

Pittodrie re-imagined – have your say!

Pittodrie re-imagined – have your say!