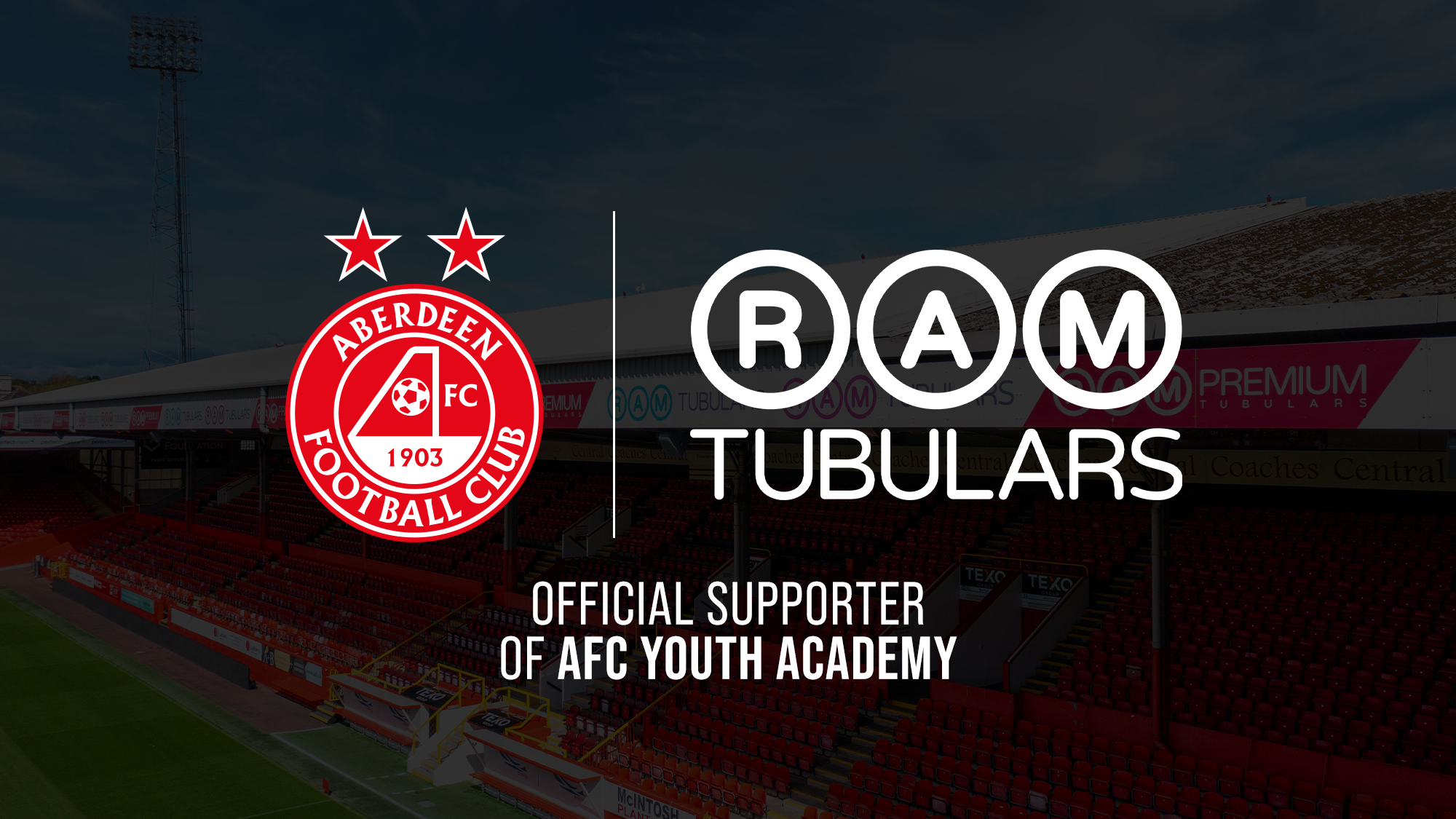 RAM Tubulars has become the official supporter of Aberdeen FC’s Youth Academy for the next two seasons.

The Aberdeen-headquartered providers of tubular pipe products to the energy and construction industries, and long-time sponsors of AFC, have signed a new deal with the Dons, significantly increasing their investment in the Club.

As part of this deal, the RAM Tubulars brand will feature prominently on the back of the men’s playing shirts for the next two seasons, as well as within Pittodrie Stadium and across the Club’s traditional and digital channels. In addition, ‘Robbie the RAM’ will continue as an official Club mascot.

Established in 1993, RAM Tubulars Scotland Ltd has grown into a market leader for surplus and used oilfield tubulars, with a global reach that now extends throughout Europe, North America and Asia. The business’s expansion recently led to the launch of a new division based in Houston, Texas, which will be instrumental in bolstering their global network for years to come.

Jim Stewart, Founder of RAM Tubulars said: “As a lifelong Aberdeen FC fan, I’m immensely proud to see our business playing a pivotal part in the Club’s development. We’ve always championed young sporting talent and helped to nurture this in any way we can, along with our charity work over the years. Our business has expanded through investment, and so, I hope through this partnership we will see the Club go from strength to strength with the Youth Academy continuing to play a crucial role.”

“When we embarked on our initial partnership with them at the start of this season, there was a clear focus on their support of our Youth Academy strategy to become the best developer of talent in Scotland.

“With academy players like Conor Barron, Jack Mackenzie and Calvin Ramsay having such an impact on the first team this season, it was a natural progression to have the RAM Tubulars’ logo on the back of the first team playing shirts next season. We are very proud to have strengthened our partnership with such a forward-thinking organisation that understands the value of investing in young talent for the future success of both the players and the Club.”

This comes hot on the heels of the announcement of TEXO as the Club’s new sponsor for the next three seasons.

Rob Wicks, Commercial Director of AFC, added: “These recent deals, combined with other partnerships and sponsorships secured recently, have provided a welcome boost to the Club’s commercial income during what has been a challenging time. This is an amazing achievement by the team at the Club who work hard to build valuable and enduring relationships with our partners and sponsors. It’s also thanks to those businesses who value the brand profile we offer and continue to invest in the Club.

“RAM Tubulars is recognised for being resourceful, industrious and forward-thinking – attributes shared by the Club and our Youth Academy. Furthermore, they are a major player in the circular economy which is increasingly important as we embark on improving our sustainability and reducing our carbon footprint. We are pleased and proud that they have strengthened their relationship with, and increased their investment in, the Club.”