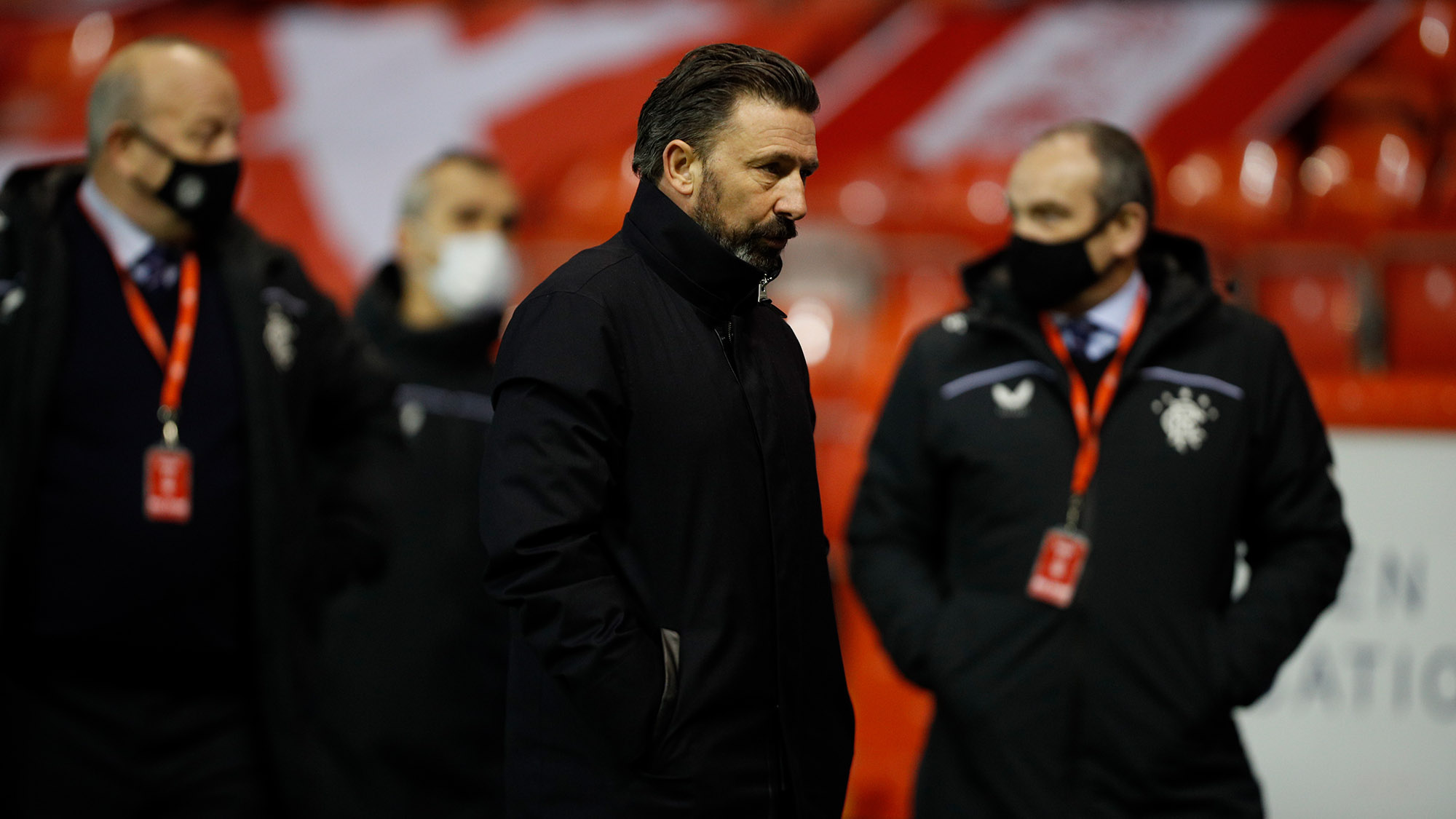 “take encouragement from the level of performance and the attitude”

“take encouragement from the level of performance and the attitude”

Derek McInnes praised the maturity and application of his side as they slipped to a 2-1 defeat at home to Rangers, playing for over an hour with ten men.

“We lost the game but we can take heart and encouragement from the level of performance and the attitude. They played the game the way it needed to be played, we came up short, but not through any lack of effort and the way they managed the last hour and the second half in particular, there are a lot of positives to take, but so there were in the first half hour too.

“We went with a positive team selection with a lot of attacking players in it, to try and play forward quicker and get after Rangers. I thought the intent of the team was good in that opening period, with Scott and Sam breaking down the sides of their centre-backs.

“There’s a trade-off with that obviously, you’ve got to be very conscious of the risk and reward with the spaces that they can maybe exploit. We wanted to stay with our system as much as we could and in that first 25 minutes, I thought we were good value, there was nothing in it.

“Rangers are a team that’s happy in possession and you’ve got to accept they’ll have good spells in a game, which they started to have around that point. The movement they have at the top end means you have to make good defensive decisions, fill in spaces for each other. The wee give-and-go that won them the penalty, we didn’t deal with that well enough and as a consequence, the game turns on the red card decision.

“My feeling at the time was Ryan did everything he could not to run into the back of Morelos, knowing full well that Morelos would get his shot away, but in doing that, the momentum was too much and he just clipped him.

“It seems a really unfair outcome but I spoke to John Beaton at half-time and he told me that he had nowhere to go with the decision, he knew it was accidental but because it wasn’t a genuine attempt to win the ball, that carries a red card. So in trying to do the right thing, Hedges gets punished where the irony is, if he’d swiped him, it would have been a booking and still been 11 v 11. But based on the laws, you can’t argue with that decision. 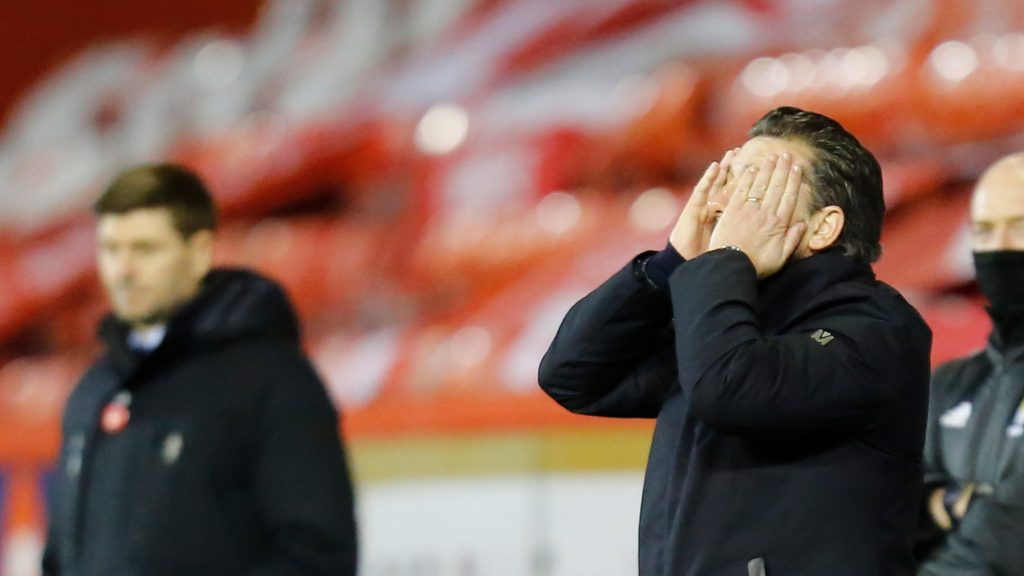 “Some people are getting excited about Curtis’ challenge and that he should have been sent off as well about ten minutes later, but it’s a yellow card for me, the ball is there to be won. It’s a robust challenge, but he’s not hurt their boy, it’s aggressive, no more than that. That’s the right decision.

“Just before the break we moved to a back four and I thought we were secure there for the majority of the time. I was disappointed with their second goal because we knew we’d have to defend crosses but we gave Morelos half a yard and for him, that’s too much space.

“That was a real blow and a lot of teams would have folded. It becomes about more than being a good footballer in these situations, you need to find attitude, spirit, determination, you’ve got to be organised and give a really mature performance.

“We had that, two young boys in Ferguson and Campbell in the middle did well, it was a real measured display from the two of them in there. They had to pick their time to make challenges or to go forward and they did it well, they were both really well disciplined. It’s another big step in their development.

“Everybody ahead of the back four put in the performance of one and a half players in terms of their work and behind them the defenders had to make good decisions, which they did.

“We knew that by trying to leave two up, we would give up the wider areas at times, but we needed to give Sam some encouragement that he wasn’t on his own and Scott and then Jonny did that, we needed some speed around about him, which is why Curtis came off when we brought Shay on. That was illustrated by the goal, and that was a shot in the arm for us that gave us belief but from there, we couldn’t get that one more chance we needed.” 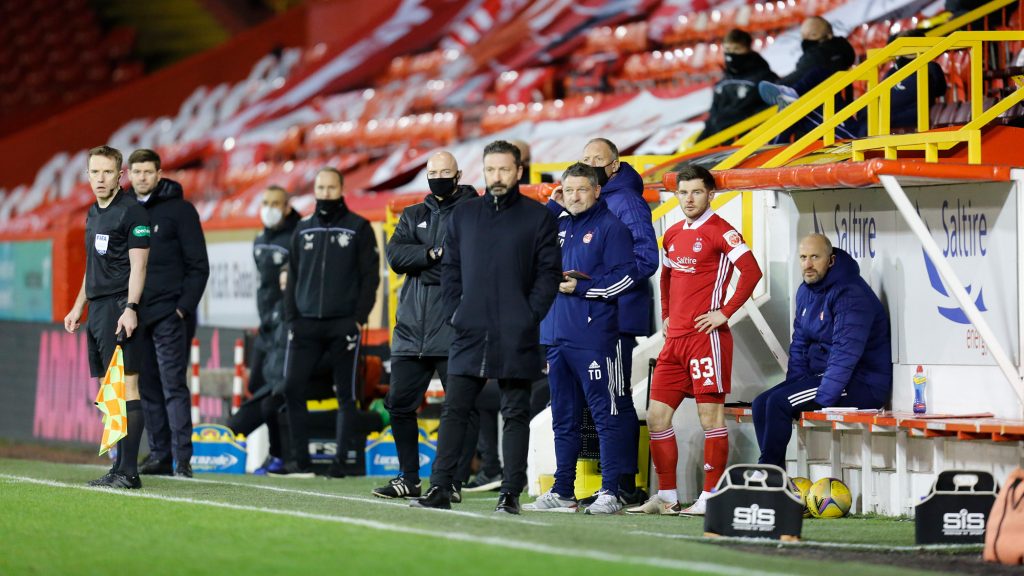