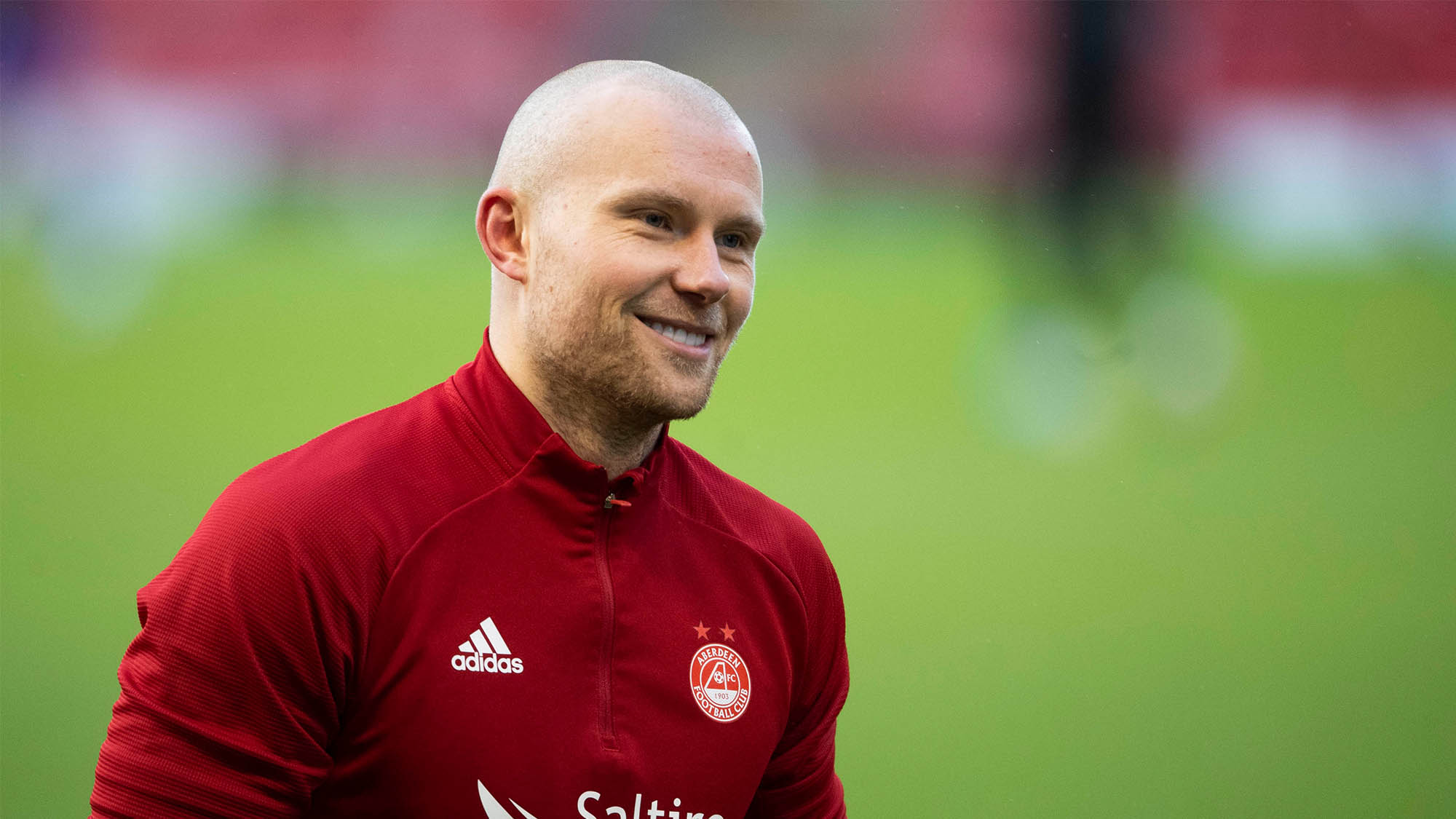 2020 was a year of real contrasts and mixed fortunes for Curtis Main. Having established himself in the starting XI back in February, lockdown, followed by injury during pre-season, curtailed his progress, but now, fully restored to fitness, he ended the year in strong style, back on the pitch and scoring goals for the Dons.

“It’s been great to be back in the side. I struggled during the first part of the campaign fitness wise, but that’s now behind me and I am really enjoying my football and contributing to performances and results.

“It was a frustrating first half of the season but I’ve finally managed to get over that now. I’ve had a consistent run of games over the past month or so and hopefully I can kick on now, stay fit and have a strong second half to the season.

“It was extremely frustrating the way the last season ended abruptly because I was having a good run in the team and I felt I was getting something going with Niall McGinn. I was really looking forward to finishing the season strongly. Unfortunately, other things came into play and that got knocked on the head. That’s all in the past, I just want to look forward now and hopefully I can finish this season strongly.

“I felt I was just really starting to show my best form, getting a run of starts. As a striker, it is difficult coming off the bench and trying to impress all the time. Playing centre-forward, you get into a rhythm in terms of being alive in and around the box. Sometimes that’s hard to do when you are coming in from the cold.

“Every player wants regular starting positions in the team. Hopefully I will continue to have that off the back of good performances and the goals that I know that I can bring.

“Saying that, I think there is more to my game than goals. My all-round game is something that I believe has helped the team recently, by bringing others into play and sustaining attacks further up the pitch. I think I can also help in trying to retain possession high up the pitch, by taking the ball into feet and then bringing wide players or midfielders into play in good areas instead of always having to build from the back. It gives us a variety of options.

“I think there is an appreciation of that side of things and also my work rate off the ball. It’s something I will always contribute. I like to get after teams, centre-halves especially. When they are on the ball, I like to let them know that I am there. It’s something I relish doing.”
That Curtis is prepared for the physical side of the game is something that comes into its own particularly at this time of year when conditions can make flowing football more difficult, as we saw here against St Johnstone last month.

“In most games you have to turn up and win the battle in some capacity. Every team in the league to a certain extent can play but they can also get in your face and make it hard for you.

“I think this season we are more prepared for the physical side of things. We don’t allow teams to bully us. I can’t say I especially look forward to games like that, real physical battles, but it’s not something I shy away from. I just look at every game as an opportunity, no matter the opponent.

“You can’t play well every week. The opposition and the conditions can influence that and every now and then, you just have a bad day for reasons you can’t put your finger on. Finding different ways to win, finding different styles of play is important, especially over the winter period. It is not always going to be pretty football and pleasing on the eye. You have to win ugly games sometimes. The game on Boxing Day was a very good example of that. Weather conditions were far from ideal, but it’s the same for both teams so whoever reacts the most positively normally gets the result. There will be more games like that to come I am sure.

“But there will also be games during the second half of the season when we will have a chance to turn on the style, to get the ball down to start playing some football in a more aesthetically pleasing way.

“There is a general feeling amongst all the players that the best is still to come. We have won some games during the first half of the season when we have not been playing too well, which is an excellent trait to have for picking up points. But everyone in the dressing room also believes that we can play a lot better. That is something we can hopefully build on over the next few games but it is tough this time of year when the weather conditions and the pitches are not always the way you would like them. I think we can build on what we did during the first half of the season and have a really strong second half.”

The winter months aren’t always the greatest for doing your training outside and getting into the gym can be a bit of a refuge from the snow and the wind. Fortunately, Curtis is very much at home in there.

“I spend a lot of time in the gym, but not doing what you think I am doing!

“I’m not just throwing weights about. My physique is something that is natural and something that I need to maintain rather than work really hard at. I do work really hard at other areas of my fitness in terms of keeping as flexible as possible. It is not good if you are carrying too much bulk around the pitch. It’s about getting a good balance really – the ability to be strong enough to hold off your marker but still be able to move around the pitch and cover a lot of distance over the full 90 minutes. It’s something I do work hard at, but maybe not in the conventional way.”

Would any of your team-mates challenge you to an arm wrestle?!?

“I am sure there are a few that would try, but it would not be worth it!”

It’s only been in the last few weeks that both Curtis and Sam Cosgrove have been properly fit and available at the same time this season. For one reason and another over the last 18 months, there haven’t been too many opportunities for them to play together, but recent weeks have seen them developing their partnership up front.

“Both Sam and I are confident that we can score goals. It is helpful to have goals spread around the team. Sam and I have had spells together but this season it hasn’t happened very often because one or both of us have not been available. It has been frustrating for me, and for Sam as well.

“It’s hard to get into a rhythm when there are changes to the forward line, but we now have all our forward players back, everyone is fit and healthy and we are looking forward to the challenges which lie ahead. Our job is to make sure we keep putting the ball in the back of the net.

“We both believe that we will score goals if we are in the team together. We have to keep working hard every day in training and then take the opportunities when they come along.

“As a team, we have had setbacks this season but overall we have been quite consistent. We all feel as a team we can improve on what has gone during the first half of the season. The most important thing is to just take one game at a time and see where it takes us.

“It has been very full on since the last international break. And it will continue to be until the next one in March. All you can do is play the games, go home and recover and then get ready for the next one. I actually quite enjoy it when it is like that, compared with having too much time building up to games. Regarding the COVID situation, nothing much has changed from our perspective. We have to be very careful what we do away from the training ground but that’s part of our job.”

Curtis’ contract at the club runs out in the summer, but that’s something he is pretty relaxed about give all the other things that have gone on over the last few months.

“I have spoken about my contract situation recently. It was a case of me getting back to full fitness and getting regular game time. That is all I am concentrating on at the moment. That’s my first priority. Hopefully I can stay in the side and then we can have a discussion once we get a bit of time.

“It does give you an added incentive to perform as you are working towards or for something, but I go into every game wanting to perform my best. Scoring goals is part of that and contributing to winning football matches and racking up points. Since I have come back, I have been able to do that and if I continue to do that, then the contract situation will take care of itself.

“Myself and the family have really enjoyed living in the area. Obviously it was not ideal during lockdown but even then we able to go and enjoy the surroundings. My son loves being outdoors and loves nature. That is something I enjoy doing with him, so it has been a good experience up here and hopefully it continues for a lot longer.”