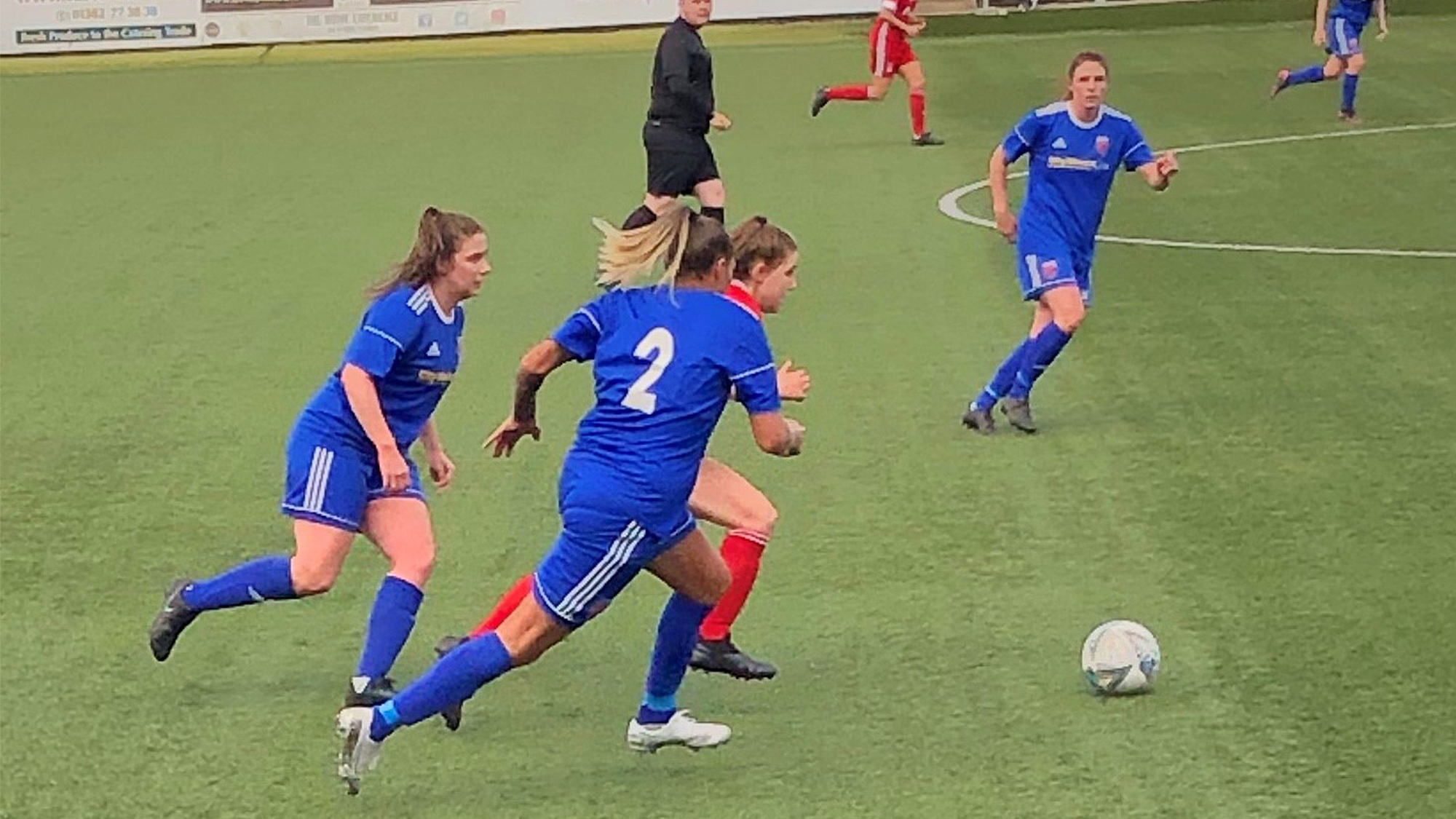 Aberdeen completed their pre-season schedule ahead of next weekend’s SWPL2 kick-off with a 1-1 draw at SWPL1 side Forfar Farmington at Station Park. The draw was the Dons final warm up match following on from last weekend’s defeat to Hibernian and the performance should see them head into next week’s league opener with Dundee United in a positive frame of mind.

The visitors got off to a good start as they faced opposition from the league above their own for the second consecutive game. Chloe Gover’s pressing high up the pitch forced an early mistake in the Forfar backline but Bayley Hutchison was unable to capitalise as Fiona McNicoll saved at her feet.

Johan Fraser then cushioned a clever ball forward for Hutchison who powered a shot wide as the visitor’s positive start continued. All the attacking play in the opening twenty minutes came from the team in red as Gover and Eilidh Shore both sent half-chances wide of the target.

The hosts could’ve grabbed the lead on twenty minutes though as a corner from the left saw Billie Simpson head wide at the back post. Just two minutes later the Dons got the goal that their lively start merited.

Good work from Hutchison down by the corner flag saw her win possession before heading towards the penalty area on the right. The Dons forward flashed a low ball across the face of the Forfar goal which found Bailley COLLINS who smashed the ball high into the net for a goal on her first start for the team.

The goal seemed to shake the home side into action as they began to see more of the ball in the Dons half. They were rewarded with an equaliser on 34 minutes courtesy of a fine long-range finish. SIMPSON was afforded far too much space as she picked up possession inside the Dons half and she sent a perfectly placed lob over the helpless Anna Blanchard in the Aberdeen goal.

The final ten minutes of the half were tightly contested with both sides coming close to taking a lead into the interval. A Cassie Cowper free-kick into the area caused a scramble in the visitor’s penalty box which they did well to clear.

At the other end a great ball forward by Carrie Doig found Francesca Ogilvie running down the left wing. Ogilvie’s centre fell to Eva Thomson who just couldn’t get enough on her shot to test McNicoll. The home side again threatened right on the half time whistle as Charlotte Gammie saw her lob bounce inches wide of the target.

The Dons made some changes at the break with Gail Gilmour replacing Blanchard in goal and Amy Strath taking Doig’s place at the heart of the defence. Forfar meanwhile started the half looking dangerous as one of their half time substitutes London Pollard set up Gammie who saw her shot go wide of the target.

Pollard then went close herself just two minutes into the half as she saw her low shot across goal well parried by Gilmour as Jessica Broadrick did well to clear away the loose ball in the box. Aberdeen survived that early scare to work their way back into the half as both Collins and Hutchison had attempts from outside the area.

Eva Thomson then brought out a good diving save from the goalkeeper following a neat turn and shot from the angle of the penalty box. Pollard continued to look dangerous down the right for the hosts but they couldn’t create much in the way of clear chances.

At the other end Hutchison followed up a strong run through the centre of the pitch with a powerful shot which was tipped wide for corner.

Much of the second period was an evenly matched affair and it was impossible to tell that there was a league of difference between the two sides. Both teams then had late chances to grab a win in the final ten minutes.

Ogilvie and Thomson combined well on the right to set up Hutchison who saw her shot strike the outside of the post. Then Pollard saw her low shot well saved by Gilmour as the Dons keeper dived to her right to tip the ball away and ensure the Dons came away with the draw.

Chloe GOVER: “I think we played for the majority of the game. I still feel fitness is a wee bit of an issue but we’ll get there with that. I thought we played really well today and we created a lot of chances and it’s just a shame that it ended in a draw. It’s good for confidence to get a draw against a team from the top league and watching today I don’t think you would be able to tell they were a better team.

“Our build up to the game isn’t normal, we normally get into the changing room and get some music playing so it’s really strange to have to get changed at the side. We normally have a meeting inside before the game so I think it maybe takes longer to get going at the start of the game”.

Bailley COLLINS: “It was my starting debut today so getting a goal was a really good way to start and I thought we did really well in the game.

“We’ve been working hard in pre-season to tie up the last few things for the season starting next week. It’s a big change in how we prepare on a match day now but I think we just have to get used to it as we don’t know how long this will be for so we’ve just got to get on with it”.

Andrew “A very proud moment for me and my family.”

Andrew “A very proud moment for me and my family.”