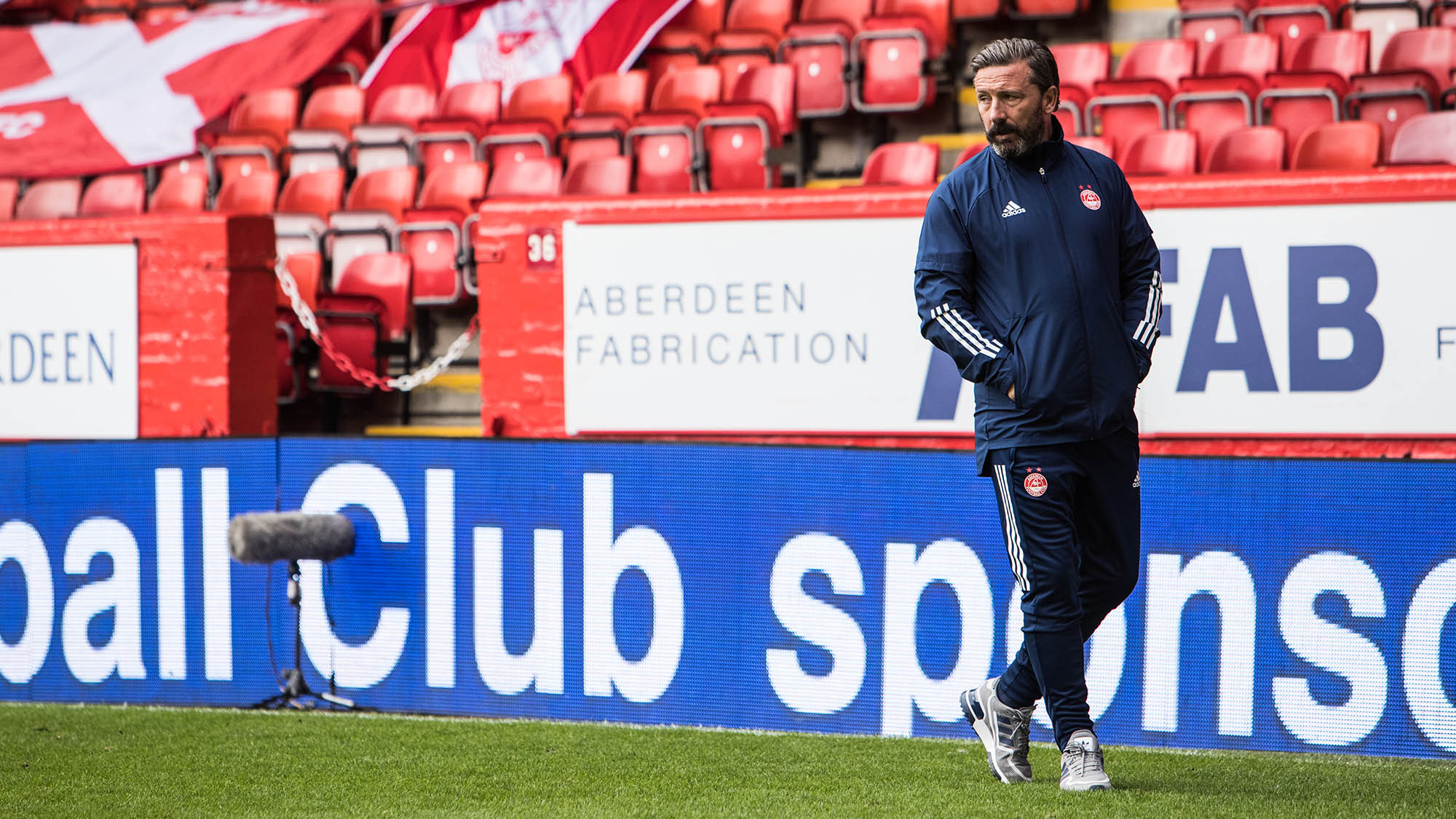 Aberdeen Manager Derek McInnes addressed the broadcast media and written press this afternoon in lengthy interviews. His broadcast interview is available to watch on RedTV or watch it via the AFC YouTube Channel below:

“We were first aware there was an issue when there was a positive test on Tuesday from one of the players after our routine testing. The timelines there on after, we found out a group of players had been out and we found out what their movements were. We then had another positive test yesterday from that group. With what is going on in Aberdeen and the cluster we were more apprehensive about the testing yesterday.

“Our investigation is well on and we are getting to the bottom of it because as well as a health issue there is the discipline issue.

“First and foremost, having spoken to all of the players who were out, they all take full responsibility, they have made a real error of judgement. They are full of regret, and rightly so. The anger and disappointment comes from the fact they have put themselves in that position.

“The rule they have broken is the four-house rule.

“The four-household rule is clear, and they are guilty of that. To a man and what they have said to me, they felt that because they are in their own bubble here and have tested negative and share the same changing room, they said that hadn’t even crossed their minds.

“For us to protect our bubble, our players need to be far more aware of their responsibilities when they are out. We were training the next day, so they are absolutely fine to go out for dinner but not in the numbers they were in and they all accept that.

“They are guilty of a really bad decision.

“The restrictions we are under, the players need to have that added responsibility. They have to be far more measured and make far better decisions than going out in a group.

“The bit for me that makes it even more of an issue is that they then go after dinner into a pub for a short time. There was no intention for them to go out partying, I think there was only a couple of them who had a glass of wine with their food. The majority of them were driving and were not drinking because they were training the next day.

“Then the added factor, where I think they have been very foolish, is that we have lost a game, a very important game to Rangers. We all have been at Aberdeen long enough to know that you don’t go out the door if you lose a game.

“That is where they have been foolish. That has added a lot of anger and disappointment.

“There is not a club in the land that would fine their players for in isolation just going for dinner together in normal circumstances. For me, in terms of the numbers that they went out for dinner, despite the intentions, they have broken the protocol rules. As a consequence, they have put themselves at risk and our bubble at risk that we have worked so hard to protect.

“We have made the players well aware of their responsibilities.

“We are mindful of our responsibly to keep the fixture list going and to keep Scottish football going because we are grateful of responsibility to be able to get back playing. I have said often enough over the past few weeks, it was not that long ago that we did not think we would have the opening day, and we would not have football.

“We have been clear with our message since we came back, for us to keep Scottish football running and for us to keep a product on the pitch, we are all responsible for our actions.

“The club have worked so hard to make sure the players are safe at Cormack Park and Pittodrie. We have done absolutely everything by the letter of the law to put all the protocols in place. No short cuts have been taken.

“None of the staff or players are allowed to travel together. There are only three or four players allowed in each changing room. In the canteen it is one player to a table. They always have masks on around the building, they are never around each other in big numbers, apart from on the training pitch – and they are only allowed there after negative tests.

“So we can control the work environment but when they leave here we are trusting them to show some common sense and be as vigilant as they are here.

“As the lockdown restrictions have started to relax and people start to go back to some form of normality, we have reinforced the message to the players that we have still got to behave as if we are in lockdown. That is where the players have made such a wrong call.

“They have been exposed. They are full of remorse; they are all well aware of the consequences of their actions and we have to deal with that as a club.

“I understand everybody’s frustrations at the minute, we are all angry, we are all disappointed, everyone that is connected with the club be it the supporters, the board, the staff, the players, we are all extremely disappointed and angry that we find ourselves in this situation.

“There is a far bigger picture in Aberdeen at the minute, the cluster over the weekend has put everybody more aware of their movements and what they have been doing. I am disappointed that our players have put us in the spotlight, rather than just Aberdeen itself.

“To our supporters, the embarrassment that they can’t get to see their team play and they will feel let down by the players.

“We know it is crucial to keep our bubble intact to get games on and to deliver football to the supporters. I think the supporters deserve better. They have stepped up, they have fully supported us, they should expect better from the players.

“The players are getting a kick in at the moment. I am sure it will become apparent which players were involved. We need to stick together and get through this over the next couple of weeks and hopefully get back to football and winning games helps that.

“We now try and prepare for the game on Wednesday with Hamilton and nothing changes until we hear differently. We will get further tests done and we will see where we go from there.

“Without underplaying the seriousness of the situation, I have to now concentrate on the players who can play and can get us three points. And that is what the fans will want to see as well.” 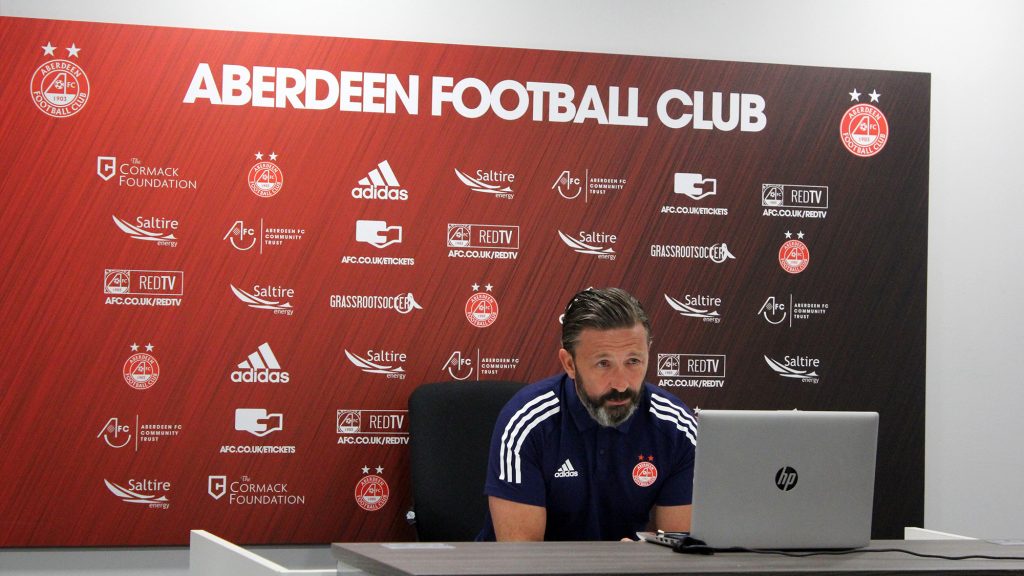