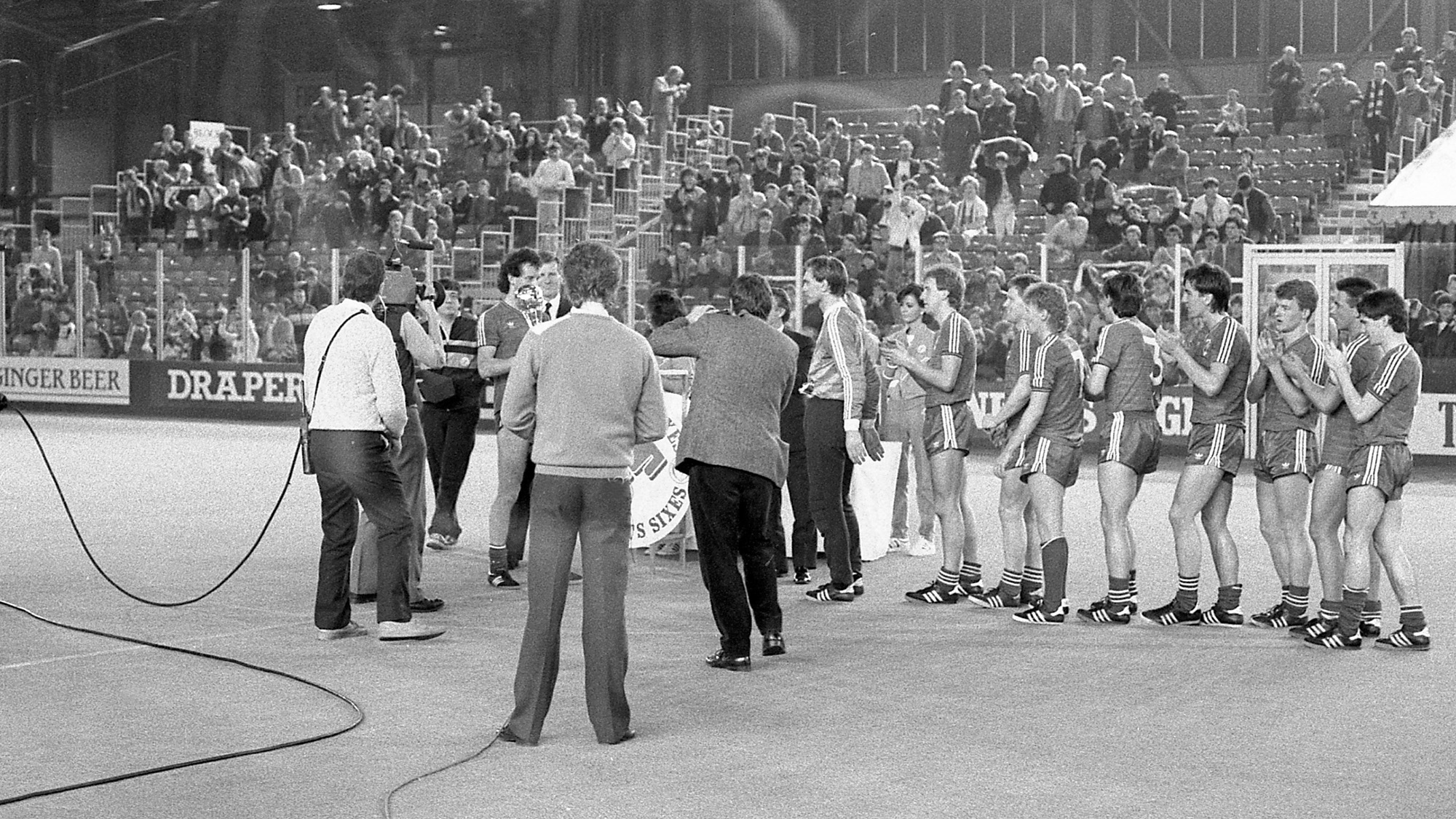 ‘– a notentirely competitive tournament of patchwork squads keeping in out of the cold on a January weekend – it fairly penetrated the public consciousness, gaining cult status over its decade of existence.’ Chris Crighton (Red Matchday contributor) 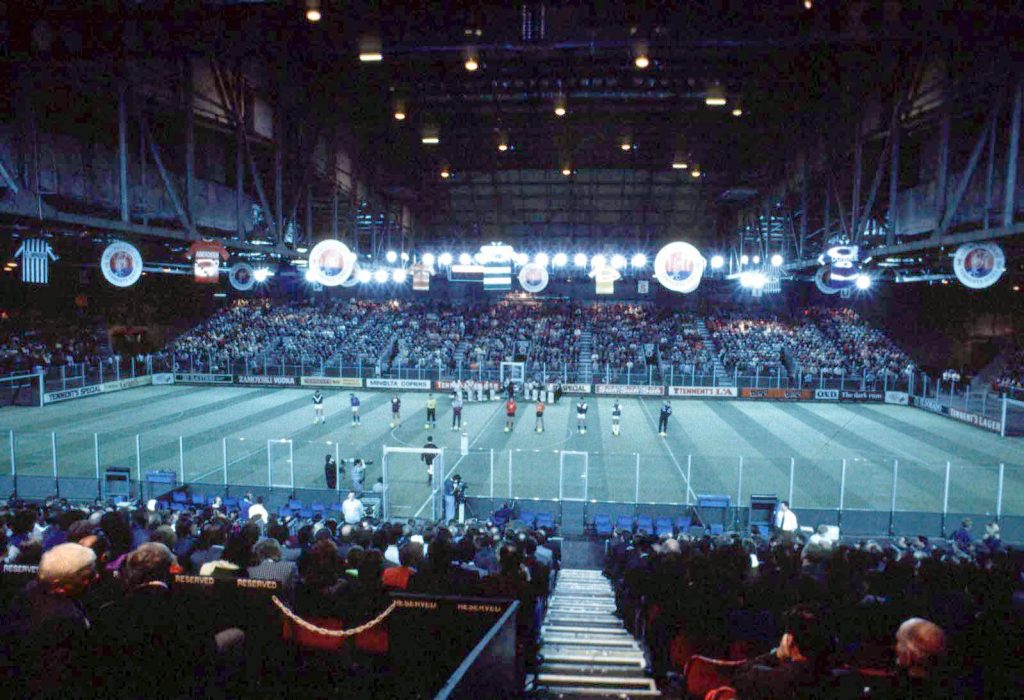 Six-a-side indoor football was launched by the English Football League in May 1982, with eight Midlands clubs contesting the Austin-Rover tournament at the Birmingham NEC.

It was then moved to the G-Mex Centre in Manchester and branded Soccer Six which took place just before Christmas with the games broadcast on the BBC 1 programme Sportsnight. With English clubs banned from playing in European competitions, the English version was fairly strong right up until its demise in 1991. Aberdeen were invited along one year to play in it.

In Scotland the Tennent’s Sixes was launched in 1984.

Rangers won the inaugural 9-team tournament at Coasters Arena in Grangemouth that the Dons curiously sat out. The following year it took place at Ingliston Showground near Edinburgh, with Hearts lifting the trophy.

Aberdeen swept Scotland’s cup competitions during the 1985-86 season by adding the Sixes to the League Cup and Scottish Cup after beating St Mirren 3-0 in the final. 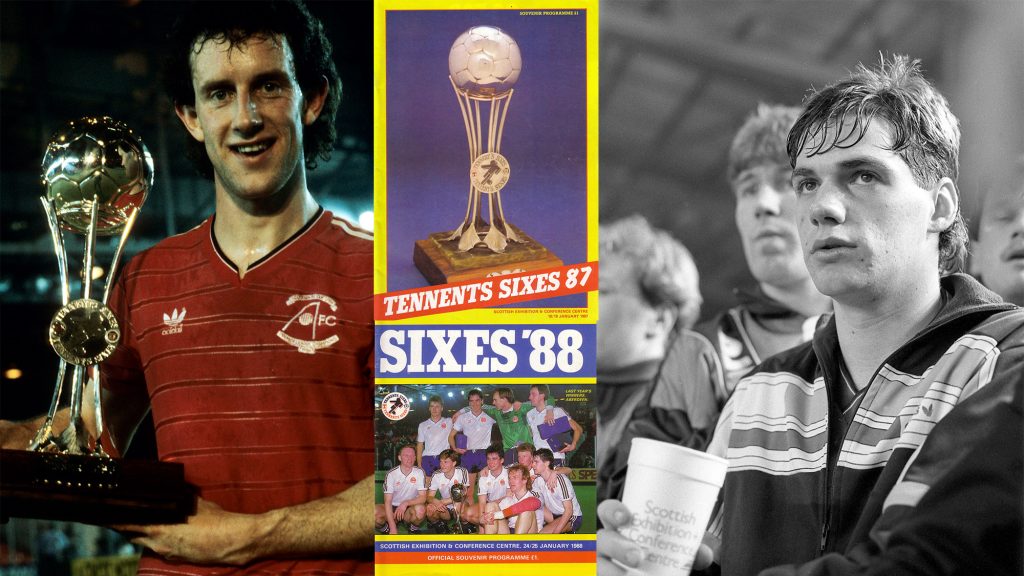 You can watch all the games from the 1986 tournment on RedTV this weekend. 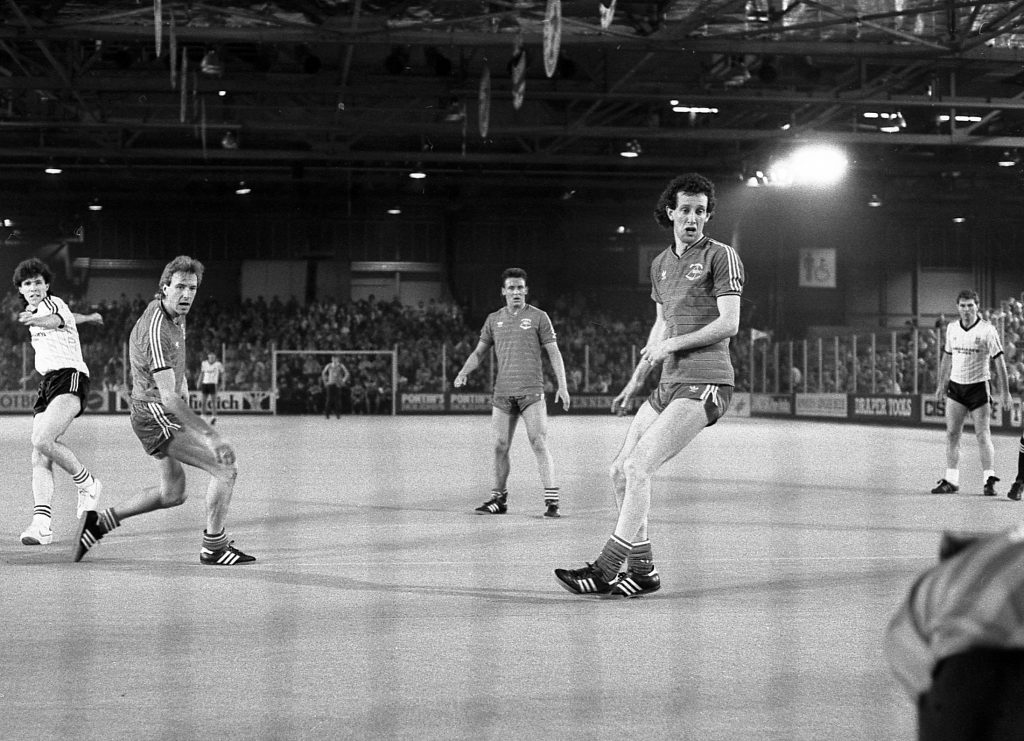 A second Sixes win looked unlikely when Hearts built a 3-1 lead early in the second half of the 1987 final comprised of two 10-minute periods.

But a thrilling comeback led to a 4-3 win over the Jam Tarts in January 1987 to retain the Sixes trophy in front of a packed 7,000 crowd at the Scottish Exhibition and Conference Centre in Glasgow.

Hearts entered the decider with fresher legs as their semi-final was played first.

The Dons then endured an attritional battle with Hamilton Accies that saw the crowd counting down the final seven seconds of scoreless action when Alex McLeish strode forward to collect possession close to Hamilton’s final-third line.

Aberdeen’s captain shaped for a right-foot shot before sidestepping two Accies players and thundering a left-foot rocket into the top corner to settle the contest without the need for a penalty shootout.

The Dons’ lingering fatigue was exposed when Gary Mackay put Hearts ahead after 28 seconds of the final as a crowd largely comprising Celtic fans.

Former Don Andy Watson combined with Mackay to set up John Robertson for a second goal before Paul Wright blasted a response past Henry Smith after John McMaster’s astute dummy created space for the teenage striker.

Mackay restored Hearts’ two-goal cushion shortly after the changeover before McLeish again inspired his team in their moment of need. He surged forward to spark a move that ended with Neil Simpson’s sharp turn and swiveling shot past Smith. 3-2. 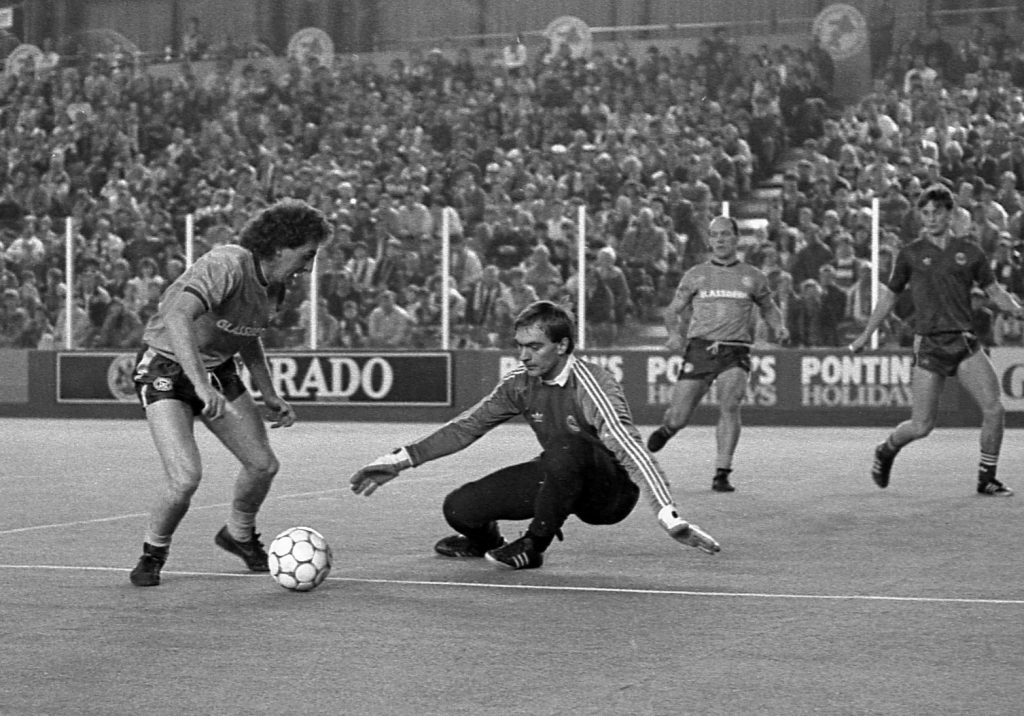 Aberdeen’s players were getting a second wind and growing in confidence.

Simpson curled a sublime pass into space behind two Hearts defenders for the lurking Wright to connect with a cushioned volley that unfortunately landed in Smith’s arms. Simmie was bossing the game now with his socks rolled around his ankles like Platini in his pomp.

Two minutes remained when the Dons blocked a Hearts move. Joe Miller gathered the loose ball and surged clear on a 2-vs-1 break, tempting the hapless Jimmy Sandison toward him before slipping a sideways pass for Wright to complete both his hat trick and an impressive turnaround.

Wright punched the air with a clenched fist in celebration. The backtracking Sandison raised his hands to his head in despair.

In the closing seconds Sandison and Kenny Black were sin binned. Hearts attempted to sneak an extra player onto the field only for referee George Smith to spot the ruse. Aberdeen’s first, and ultimately only, trophy under the management of Ian Porterfield had been secured along with an £11,000 cash prize.

The Sixes final took place on a Monday night. Incredibly Hearts then came to Pittodrie on the Wednesday and Aberdeen beat them again, 2-1 with Willie Miller getting the Dons second, which proved to be the winner. The captain intercepted a pass in midfield, played a one-two with Brian Mitchell and belted a left-foot screamer past Henry Smith from 25 yards. Scenes. 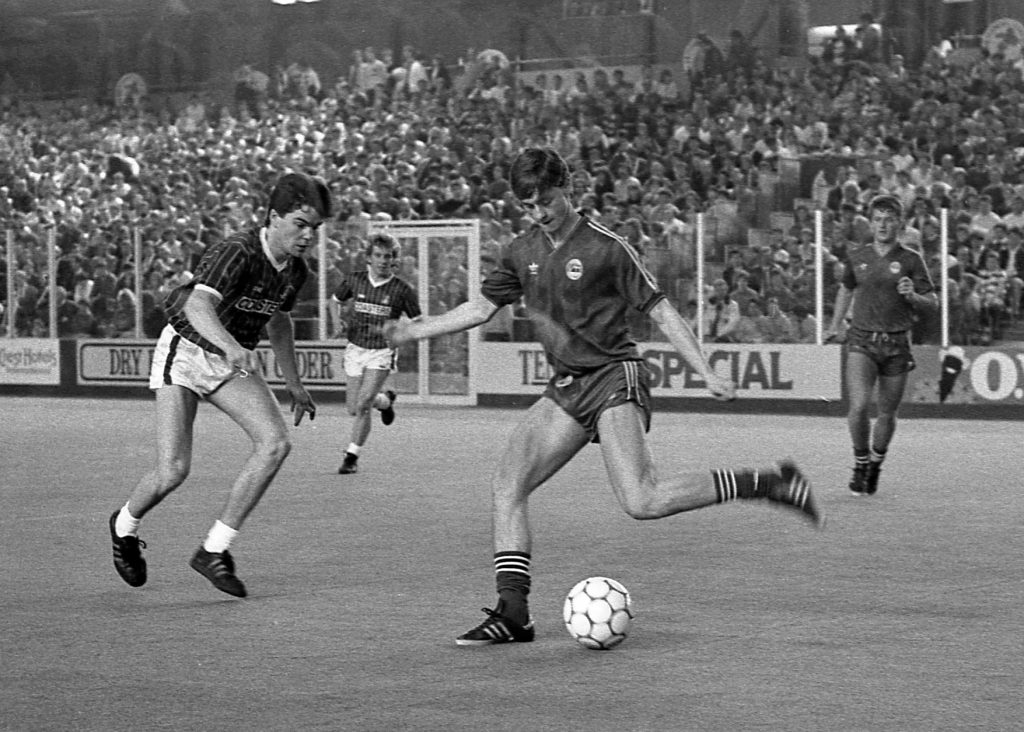 Although official winter breaks were not in place, very often the weather would lead to a weekend or two off in late January and this meant some strong squad were sent. But towards the end the top teams, including Aberdeen, had pulled out. The games had become virtually non contact to avoid injuries which meant it was like watching basketball. And as we moved into the 1990s the world of football was changing:

‘The Tennent’s Sixes crowned its last champions in 1993, months before the re-branded Champions League and English Premier League anointed their first: as football morphed from a game into an economic commodity, the idea that its senior entertainment executives (players, to you and me) should be allowed to submit themselves to the possibility of becoming structurally sub-optimal (ie injured) by participating in a gymnasium kickabout, solely for the amusement of the viewers of Scotsport, could not be tolerated.’ Chris Crighton (Red Matchday contributor)

Still, the plexiglass and the green carpet – or really rubbish AstroTurf which gave very painful carpet burns – will live long in the memory. 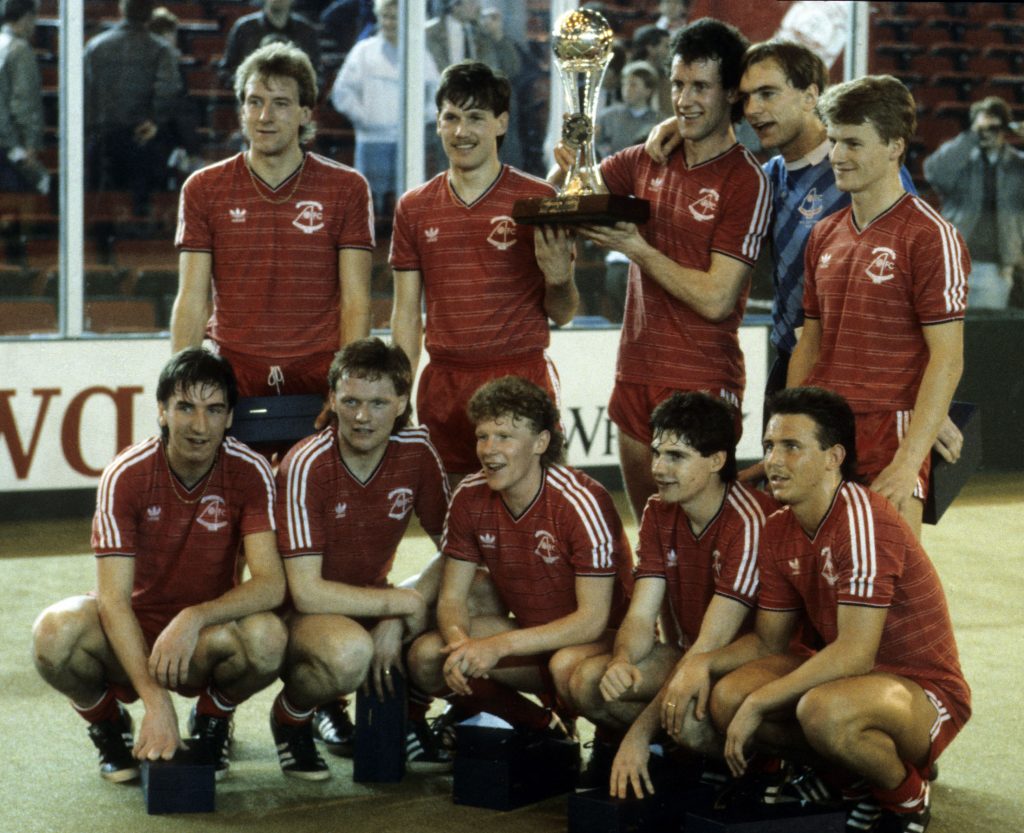