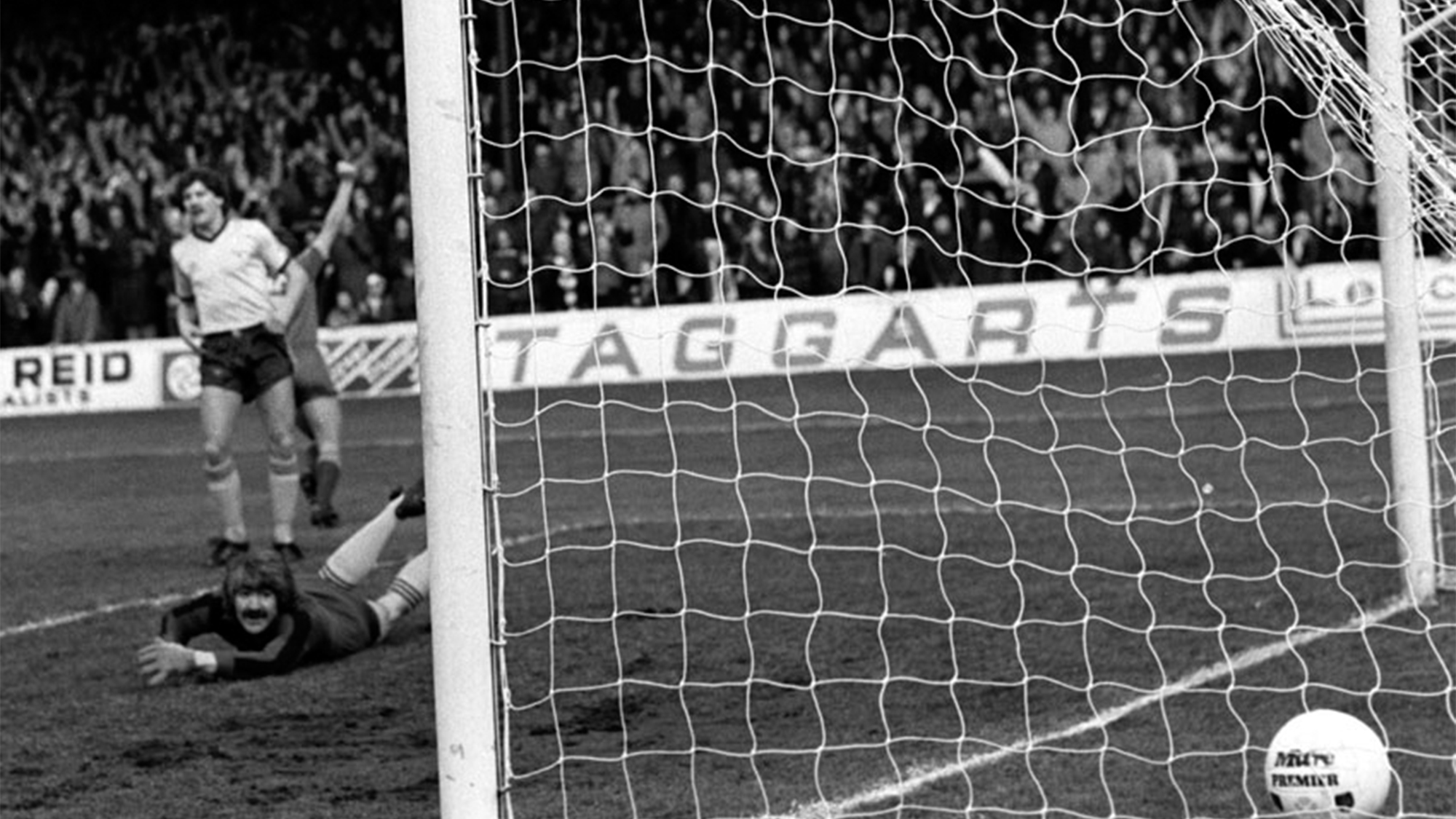 The first occasion the Dons met Motherwell in the Scottish Cup was back in 1925 when Aberdeen prevailed in a 2-1 win at Fir Park after a 0-0 draw at Pittodrie. Aberdeen at that time had four Jackson’s in their side, including the renowned Alex who went on to earn fame as a Wembley Wizard for Scotland in 1928. It was Jimmy Jackson who scored to put Aberdeen through to the quarter final after the Pittodrie stalemate. In the first game the Dons were unlucky not to go through after Alex Jackson and Tom Pirie missed several good opportunities.

In 1939 and several months before the country went to war, Aberdeen were ousted from the cup in tough semi-final against the Lanarkshire club. Aberdeen, who were favourites to lift the cup after Celtic and Rangers failed to reach the last four, were dismayed that Ibrox was chosen as a neutral venue. However a crowd in excess of 80,000 turned out to Aberdeen being held in a 1-1 draw. Dave Warnock scored the Dons goal. The replay four days later attracted half of the crowd from the first tie and it was a bitter disappointment for manager Dave Halliday as his side were wasteful in front of goal and went down 3-1. You can read more about the only other semi-final ties between the sides in Saturday’s match programme produced by the SFA.

It was not until 1953 before Aberdeen extracted revenge and they did so in some style. For the third time in succession the tie went to a second game. Motherwell arrived at Pittodrie as holders in February 1953. On the eve of the game, Dave Shaw was appointed as player/trainer. Although Motherwell opened the scoring Aberdeen gained control and raced into a 3-1 lead. An incredible tie for the 28,000 crowd saw the teams exchange penalties as the Dons went into a 5-3 lead with 14 minutes left. Motherwell rallied and two late goals took the tie to a second game after a 5-5 draw.

Four days later Aberdeen showed their best when they raced into an incredible 4-1 lead by half-time. This time the Dons defence stood firm and went on to rout the holders in a 6-1 win. Harry Yorston scored a hat trick as the entire Hibernian squad watched from the Fir Park stands. The Easter Road side were the Dons next opponents. Aberdeen won their Quarter Final tie against the Edinburgh side after a replay and also beat Third Lanark in the semi’s after two games. The final also went to a replay but Rangers defeated the Dons by a single goal in the second game in front of a crowd of over 110,000.

Five years later Aberdeen went down at Fir Park in a quarter final tie. Motherwell were struggling to stay in the top league but were tough cup opponents; Aberdeen levelled through Norman Davidson in the second half and when Motherwell lost McFadyen through injury the Dons could not capitalise. The legendary Ian St John stunned Aberdeen by scoring an unlikely winner. The striker would go on and torment the Pittodrie side on a good number of occasions before leaving for Liverpool in 1961. 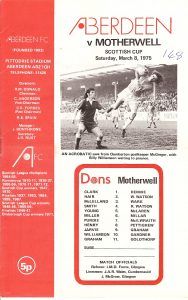 In 1975 hopes were high that Aberdeen could go all the way to Hampden after knocking out Dundee Utd and Rangers. A home quarter final tie against Motherwell had Aberdeen as favourites but a Bobby Graham strike just before half time sent Aberdeen tumbling out of the cup.

The big freeze of 1982 saw Aberdeen come out of cold storage and face Motherwell at Fir Park who were leading the First Division with Aberdeen riding high in the Premier League. The game will always be remembered for a Scottish Cup record that still stands to this day.

Last season’s Scottish Cup semi-final saw Adam Rooney score after 12 seconds – the same again Adam on Saturday would do nicely. However it is not quickest goal scored by the Dons in the Scottish Cup. That honour goes to a man who happy knack of scoring in the big games.

John Hewitt’s goal in the opening round of the Scottish Cup in 1982 was timed at 9.6 seconds, a record for the competition and made the goal even more special, the TV cameras were in attendance, most likely to see if a cup shock was on the cards. Archie Macpherson barely had time to pick up his mic before Hewitt struck.

John, speaking to RedMatchday’s Richard Gordon recalled the goal “Stuart Kennedy hit a diagonal ball and I just basically gave chase, I didn’t really think I was going to get it, but when the ball broke to me I touched it past the defender and fired it across Hugh Sproat and in at the far post. 9.6 seconds and that was it, although it was a really hard-fought victory.”

As John rightly says Motherwell then dominated much off the game. Davie Hay was their manager at the time and the Fir Park side would go on and clinch promotion, ten points clear of Kilmarnock who were also promoted, pipping Hearts by one point. Despite being top for much of the campaign Aberdeen lost their league crown to Celtic.

However they would end a run of cup final disappointments by lifting the Scottish Cup.

Against Celtic at Pittodrie in the next round a superb overhead kick from Hewitt was enough to ease Aberdeen through and Aberdeen went onto to win the trophy, beating Rangers 4-1 after extra time in the final. Fitting that John would then go on and score the winner in Gothenburg a season later after setting the club on its way in qualifying for the competition. 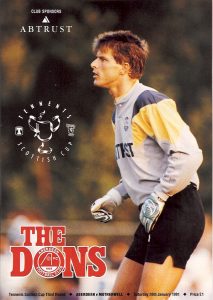 A decade later in 1991 Scottish Cup holders Aberdeen were hot favourites when the sides met in the third round but went down to a shock 1-0 defeat at Pittodrie. Steve Kirk scored a famous winner about ten minutes from time. Motherwell went on to lift the Scottish Cup that season and Aberdeen so very nearly went on and won the Premier League title. After the Scottish Cup defeat the Dons went on an incredible run – winning 11 league games and drawing one against Dunfermline at home. They also won a friendly game against IFK Gothenburg during that period. 12 league games unbeaten but defeat at Ibrox resulted in one of our most devasting losses, and one the club took a long time to recover from.

In 1996 the Dons won at Fir Park in a comfortable 2-0 win which was filmed by Sky TV. Goals in each half from Dean Windass and Duncan Shearer put Aberdeen through to the fourth round. Aberdeen lost at the semi-final stage that season, losing 2-1 to Hearts. Another fairly devastating loss.

More recently in 2012 two goals from Rory Fallon put Aberdeen through in a bruising encounter that saw Motherwell’s Lasley sent off. A late goal from Nicky Law set up a very nervous finish but Craig Brown’s side held on for a famous win. Andrew Considine, Kari Arnason and Mark Reynolds all featured in that game for Aberdeen. 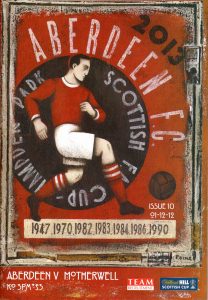 Then a season later in December 2012, a last minute goal from Niall McGinn saved Aberdeen from a cup exit and earned a 1-1 draw at Pittodrie. It was a superb header from Niall. Aberdeen took full advantage in the replay and goals from Fallon and Joe Shaughnessy sent Aberdeen through to the next round. A Michael Higdon penalty in the final minute was too little too late.

So Aberdeen and Motherwell have met in the Scottish Cup on 14 occasions with the Dons having a record of six wins, four draws and four defeats. Saturday though is arguably the most important ever cup fixture between the sides. 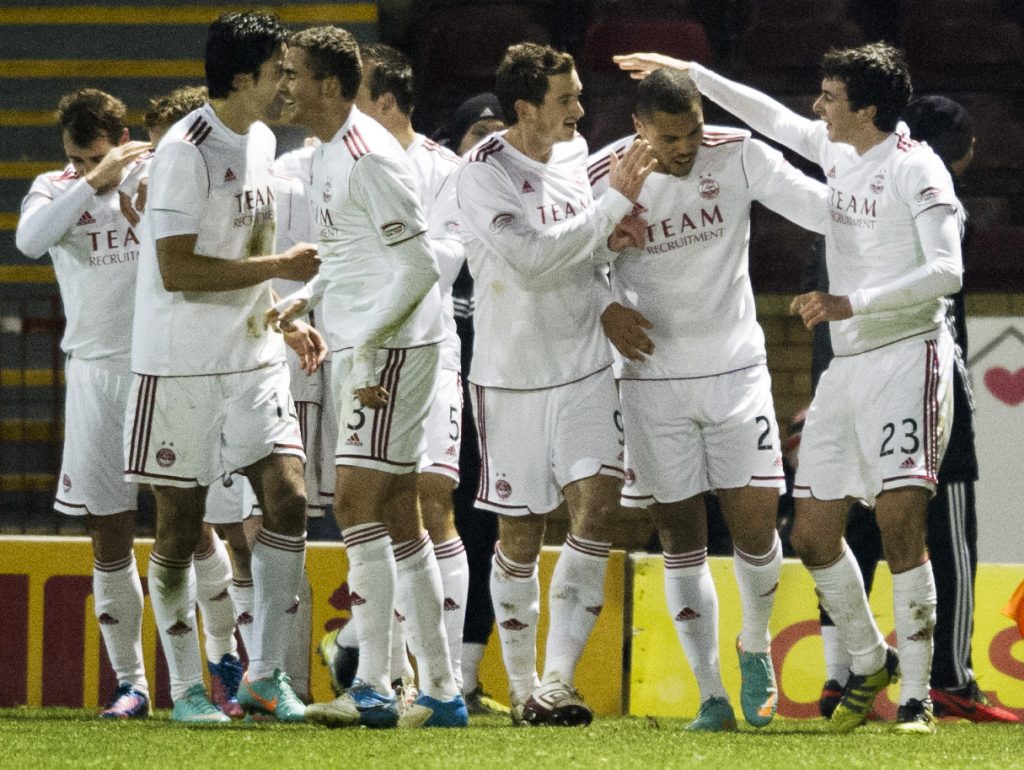