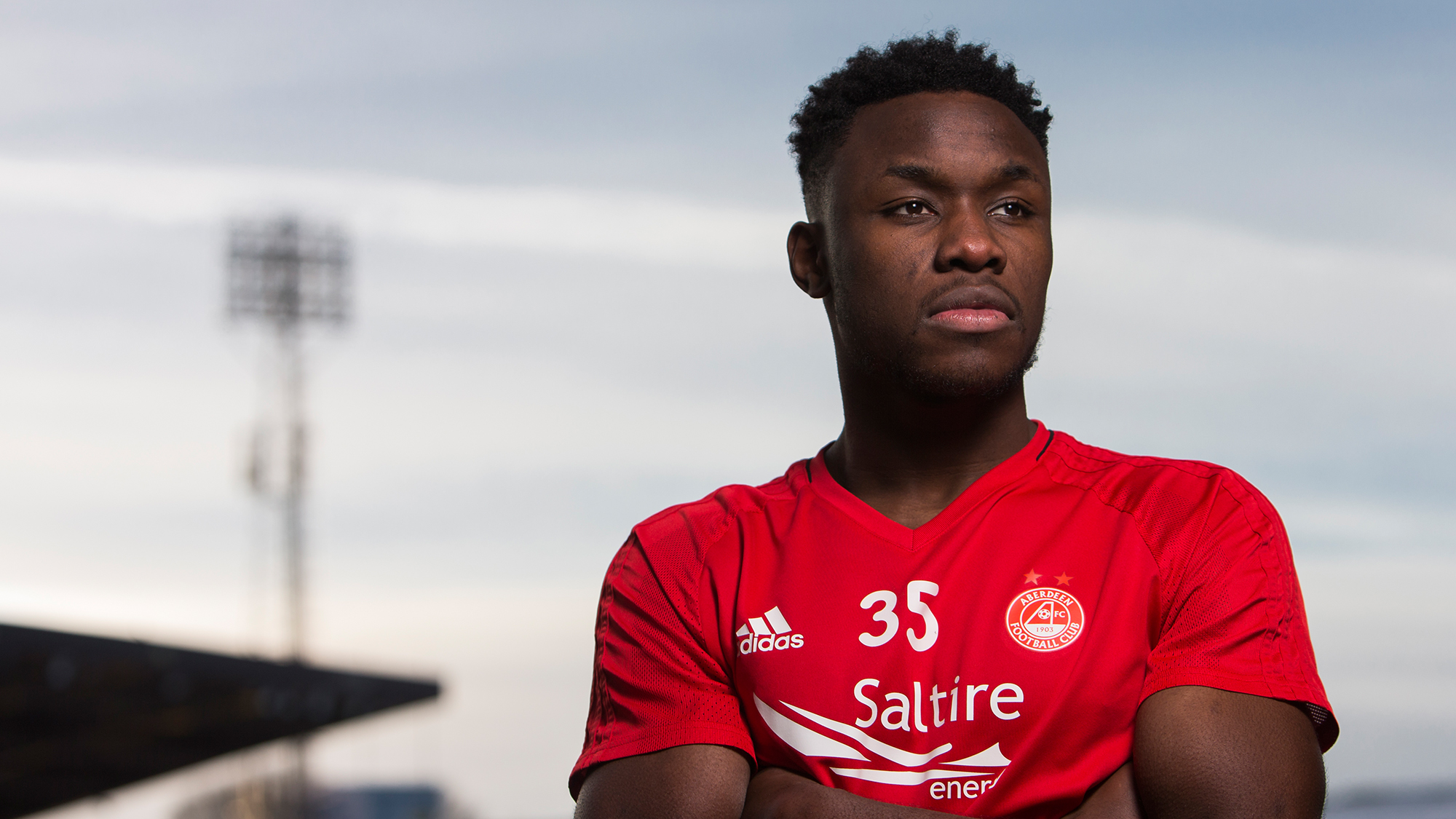 Like the first team, the U20s are currently sitting in second spot in the League during the winter break.

Like the first team, the U20s are currently sitting in second spot in the League during the winter break.

Football truly is the global game.

If you need any further convincing of that, take the case of young Harlain Mbayo, now a pillar of the Dons’ U20 defence but who came to use via a circuitous route that took in the Congo, Belgium and England. It’s some story he has to tell.

“I grew up in Belgium. I moved there from the Congo when I was about two and stayed there until I was about ten. I can’t remember a whole lot about growing up there. I played for Anderlecht from the age of eight until family moved to England. They are a huge club in Belgium. My brother also played for them, he was a pro there when he was 17. I went there because of him.

“Back then I was a striker. It’s only more recently I’ve been converted to a central defender. Because of that, I still like to score the odd goal and chip in with some assists during the season.

“I still have a lot of family back in the Congo but my immediate family are back in Hendon in North London. I went to a school there called Christ College which was an all boys school. I only started playing proper Academy football when I was about 15 again when I went to QPR. I was a scholar there, their name for a youth player, and then I joined Oxford on a one year contract.

“I didn’t really enjoy my time in Oxford and left at the end of that season. I spent the summer basically playing amateur football and it was good to get back to just enjoying the game again. I played for a side called Bedford because a few of my mates played there. After leaving Oxford, I did not feel like playing football professionally again. I wasn’t interested in going on trial anywhere, I just wanted to play for fun. But then my agent got a call saying Aberdeen were interested. I think someone had seen me playing in a FA Vase Cup game, a competition for teams in the lower tiers of English football. 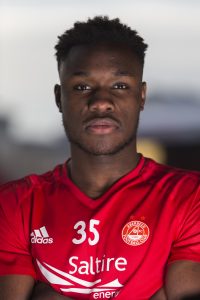 “I didn’t really know where Aberdeen was to be honest! I was confused! I was even more confused when my agent told me I had to get a plane. I had to go and look it up. When I started to learn about the club and watched a few of the games I soon realised Aberdeen were a big deal. I watched highlights of the 2014 League Cup final and saw just how big a club it is. I was quite shocked to be honest.

“London is pretty diverse and with all the culture it means a lot of people can express themselves. Of my friends, some play football, some are artists, some play music. It is really nice to have that sort of different background.

“Aberdeen is understandably very different. There are very few cities in the world like London. Most of my time here is spent with the other U20 boys or I am in the gym or in the club. I eat, sleep and breathe football. When I am not training or working in the gym, I am watching my clips of the games. I am putting everything into the opportunity I have been given here.

“I would not say it is hard being away from my family. Yes, of course I miss them. But at the end of the day it is a choice I have made. You miss certain things like birthdays and a few weddings. But hopefully the sacrifice and hard work will pay off in the end. A choice between a wedding and long career at Aberdeen, I know what I would pick?

“It was pretty tough when I first arrived in November 2015. When you come into a new club you always have to try and prove yourself. I had to wait months for my FIFA international clearance to come through, so I could not play. The toughest part was the final training session before a matchday.
Being new, I was trying to impress every day but not playing and having to watch was not easy.

“At the end of that season I did loads of work so I would be fitter than everyone else and give myself a head start for the following campaign. We played some really big games during the 2016/17 preseason campaign. We went to Portugal to played against Benfica, also we had a game against the Portugal youth national side and I thought I did well and Paul Sheerin seemed really pleased with how I was doing. But then I got injured and was out again for months. Mentally that was very tough, but Paul and all the staff at the helped me through it.

“You want to come in and be better than everyone else and showcase your ability. If you can’t do that, then you lose your focus. You are coming in every day and sitting around for long periods of time doing nothing. Mentally that is tough when you see the boys leaving for training or a game”.
After a difficult, transitional season for the U20s last season, they are back on track this season with Harlain playing a major part, being a natural leader. Also very evident is the team spirit within the group.

“It is something that comes naturally to me. We are one big family and everyone looks after each other. We all help each other. I think this season the group of players that we have got is very strong.
The players who came up from the U17s such as Seb Ross, Dean Campbell; they are going to be great players. Even the young ones such as Ethan Ross, they have really stepped up to the plate when they have been called upon.

“We are second in the league and in the last eight of the Youth Cup. That has not happened by accident. We have played well this season. On and off the pitch, the bond between the players is very strong.

“That is something we have worked on. It is so important. The last few years, we have maybe had a few big characters in that dressing room. At the start of this season the older players made sure no one was left out. We are more of a team. We will all go out for a meal together. After training, we will all go to the canteen together. We have set times when we all play the X-Box. It is just a bit of fun and a way to unite us.

“I am really enjoying my football at the moment. I know that I need to keep working hard and be patient. If you do that, then you never know what might happen. It is amazing having seen Scott Wright, then Scott McKenna and now Frank all getting a chance. We train with these guys, we speak to them every day in our dressing room. Seeing Frank scoring and Danny coming off the bench against Rangers, it gives us all a massive lift.

“These guys have all played with us this season. They have all had to be really patient. They have been really consistent over a long period of time and that is the one thing you learn. They have a great attitude. When Scott McKenna played alongside me this season for the 20s, his attitude and levels of professionalism were very impressive. That is what we all have to try and be like. Playing alongside these guys makes you want to get better every day. Having Frank and Danny in our team also helps because they are quality.

“For me personally the feedback this season from Paul has been very positive. When I first came here, the main thing that attracted me to the club was Paul because of the way he manages us. The training is very one to one, whether it be with Paul, Scott Anderson, the Doc or the gaffer – they are always encouraging you and passing on advice. 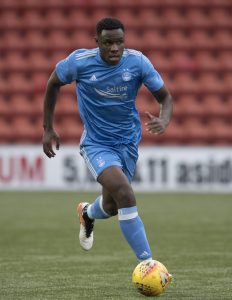 “One of the reasons we have done well this season is because of the fewer number of goals we have conceded. I have been worked off the pitch a lot with Sam Roscoe my central defensive partner. It takes time to build a partnership but now we are at the stage where we don’t need to tell each other on the pitch what to do. We just do it. We both have confidence in each other’s ability and a really good understanding. If Sam and I are playing well, then it lets the boys in front of us express themselves. There is much more security about our play and that allows the flair players to do their stuff.

“There is a lot to look forward to in January. I was looking recently at the history of the SFA Youth Cup and how many times have Aberdeen have actually won it. We have only won it three times, so it would be so special to add our names to that. Everyone in the dressing room fully understands how big a deal it is.

“A big plus this season is that it has mainly been an U20 side each week with the odd exception when first team players have needed a game. That helps us to build more and helped us have a more settled looking side in these cup games. I am very disappointed because I got sent off against Hamilton in the last round which means I will miss the quarter-final but we have players who can come in and do a job”.