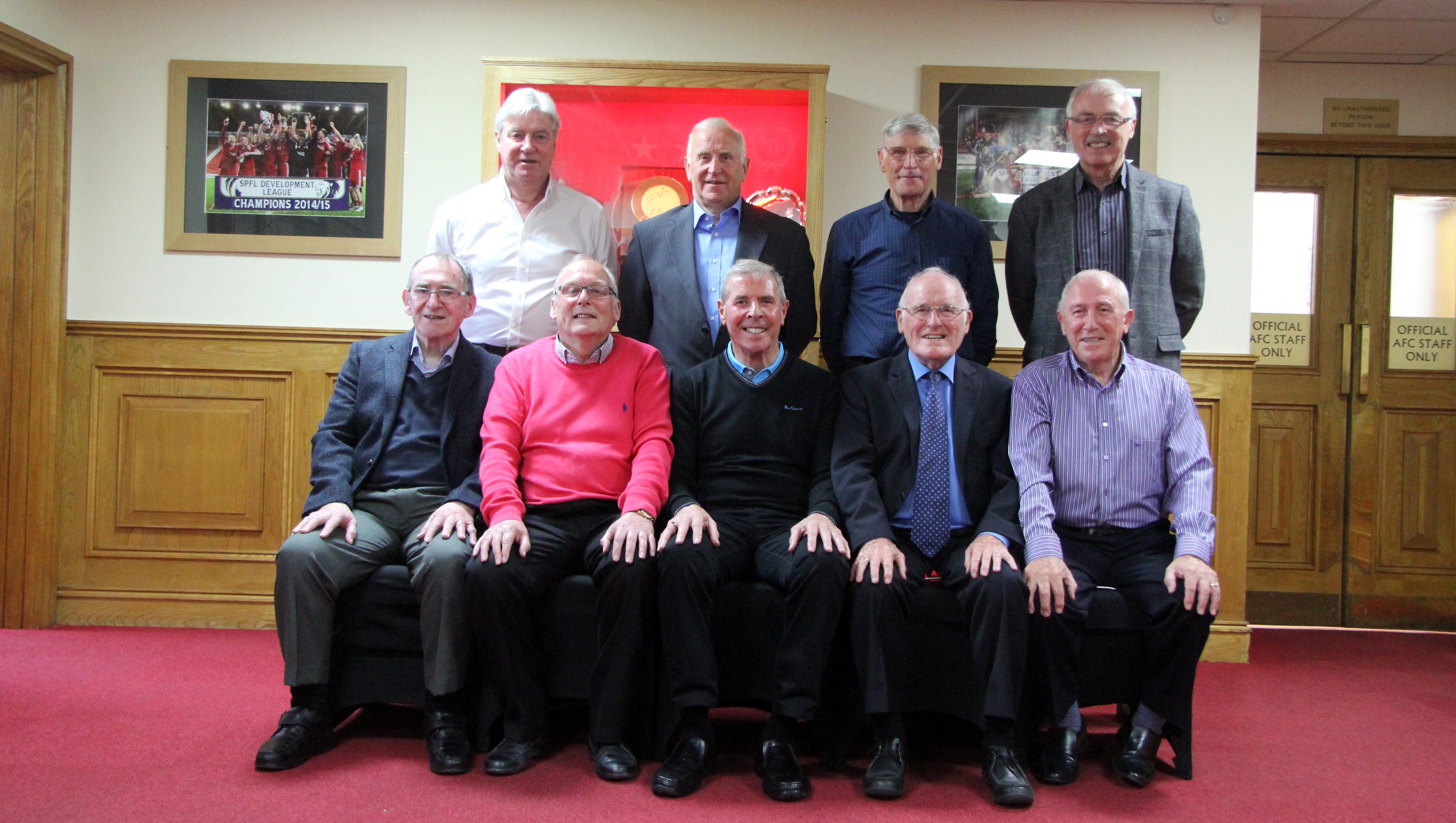 There are plenty of epic tales that have entered AFC folklore over the last century and more, but one of the more remarkable stories came under another name altogether – the Washington Whips.

In the summer of 1967, Aberdeen played their part, under the guise of the Washington Whips, in the inaugural United Soccer Association tournament. Ten European teams and two from South America were invited to participate in the latest attempt by millionaire American sports promoters to launch a professional soccer league. Eddie Turnbull's youthful squad featured Bobby Clark in goal, “Iron Man” Ally Shewan in defence and 18-year-old Martin Buchan looking to break into the starting line-up. The Whips also boasted President Lyndon B. Johnson as a season ticket holder for their games at the D.C. Stadium.

(extract taken from the Summer of ’67 by Ian Thomson)

Next year sees the 50th anniversary of the Dons' summer trip to the US. The club, in association with the AFC Youth Academy and the AFC Heritage Trust, will be marking that remarkable venture throughout the year. The majority of the Whips team were back at Pittodrie on Monday for a very special reunion, and there will be more about that here in the weeks ahead. The Washington Whips | the story

Without doubt, the best remembered Aberdeen summer tour was the one to the USA in 1967. “The trip of a lifetime, and one that I would have not missed for anything. It was a marvellous experience”. That was how former Dons keeper Bobby Clark summed up the summer of 1967 when I asked him about the marathon tour and their participation in the Presidents Cup competition.

It was indeed a remarkable adventure and the most eventful tour ever undertaken by Aberdeen, yet it all followed the Dons' defeat in the Scottish Cup Final against Celtic, a game missed by Aberdeen manager Eddie Turnbull through illness. That illness looked set to prevent the boss from going to the States with his team, but, despite being under doctor’s orders not to travel, the persuasive powers of the American soccer organisers meant that Turnbull not only went to the tournament but was also afforded a meeting with Lyndon Johnson, the President himself, as part of the deal!

Scottish football was enjoying its highest ever profile with Celtic newly crowned European Cup winners, Rangers losing to Bayern Munich in the European Cup Winners’ Cup final and Kilmarnock reaching the semi-final of the Inter-Cities Fairs Cup only to lose out to Leeds, while on the international front, Scotland had just beaten World Cup winners England at Wembley in an historic 3-2 success.

Aberdeen had emerged from a prolonged period in the doldrums and under Eddie Turnbull the signs were encouraging. The Dons had finished in 4th place in the league and also reached the final of the Scottish Cup and the last four of the League Cup. A first ever European tie awaited them in the new season but, as season 1966/67 closed, Aberdeen embarked on their tour of the States.

The Americans invited 12 teams worldwide to take part in an exhibition tournament to gauge interest in ‘soccer’ in the USA, but each club would have to adopt a name bestowed upon them by their hosts for the duration of the tournament. Aberdeen were to be based in Washington and after a radio poll that attracted no less than 35,000 entries, Aberdeen were named the Washington Whips. The 12 clubs were divided into two sections, with the group winners meeting in the final. The ‘Whips’ got off to the worst possible start with a 2-1 defeat against Cleveland Stokers (Stoke City) but manager Turnbull was none too pleased with the Cleveland approach, declaring that their defensive outlook would hardly encourage their hosts to come out and see what soccer was all about.

Next up were familiar opponents in Hibernian under the guise of Toronto City. Goals from Jimmy Smith and Jim Storrie put the Whips in command before a second half strike from Eric Stevenson meant a nail biting finish. Martin Buchan played for the Whips that day, replacing Tom McMillan who was injured in the first game. Following their first win, it was back to the grind of a 1-1 draw against the crack Italians Cagliari (Chicago Mustangs) whose ultra-defensive outlook seemed so misplaced given the ‘exhibition’ status of the tournament.

Aberdeen were then confronted with the first of a series of bruising encounters with Uruguayan side Cerro offering plenty of fight, but the South Americans had no answer to the Dons’ goal threat and a 3-0 win was no more than they deserved, though sadly Dave Johnston was injured in this one and he was to play no further part in the tour. Irish side Glentoran (Detroit) put up stern resistance with a 1-1 draw against Aberdeen as the two sections were now taking shape. Not that far away, a Scottish representative side were also touring the North American arena after visiting Australia and New Zealand. The Scots side contained mostly players who were out of the international side, but in Winnipeg, Scotland beat Canada 7-2 with a youthful Joe Harper helping himself to five goals – also in the side was Alex Ferguson.

By 14th June, it was coming down to the wire and nearest Aberdeen rivals Stoke City looked to have edged ahead until a late Wilson goal saved the Whips from defeat. What was remarkable was the physical nature of most of these games. Hibernian had trouble with Cagliari and after taking the lead, the Italian side walked off and the match was abandoned. Further drawn games with ADO Wolves and Sunderland kept the Dons in contention for that prestigious final place but the tough nature of the games had taken its toll and there were several injury problems to contend with. Boss Turnbull was determined to get his side through and with three games to play, it was still all to play for. Wolves did not help their cause in the 1-1 draw with Aberdeen as they had illegally fielded an extra substitute, the American organisers insisting that the game be replayed. Meanwhile, it was back to more familiar opponents when Dallas (Dundee United) were defeated 2-0 with a late Jim Whyte goal easing the Dons through. Against Brazilian side Bangu, it took the goal of the tournament from Jimmy Smith to give the Dons a vital win, meaning that it all came down to the last game, with Hibernian out of it after Stoke defeated the Edinburgh side.

The Dons were up against Glentoran while Stoke faced Sunderland with both teams level on points. Aberdeen looked to have blown it by losing 2-1, but news came through that Stoke had lost 3-1, but even so, it still looked ominous for the Scots, as Stokes’s superior goal difference would have put them through. However it was then decided that the Aberdeen v Wolves game would have to be replayed and a win for the Scots would secure a final place. Aberdeen came good when it mattered and hammered Wolves 3-0 to set up an intriguing final against the same side.

There was no love lost between them; Wolves were still upset at having to replay the original tie and the Dons were not comfortable with the English side’s robust approach. Those grudges spilled over in the Final, which was played at the Los Angeles Memorial Stadium. The game itself was perhaps one of the most dramatic an Aberdeen side has ever taken part in. Jimmy Smith was sent off after half an hour for kicking Wagstaffe. From that point on, it was a real courageous performance from the Dons. Frank Munro twice came up with goals in the closing minutes as ten men Aberdeen would just not give up. It took a freak own goal from Ally Shewan to finally consign the Dons to a defeat they hardly deserved. The game had just about everything but when the last whistle blew, the Washington Whips had lost out 6-5 in overtime. It was an incredible climax to an exhausting tournament.

The Dons on Tour

The Dons on Tour