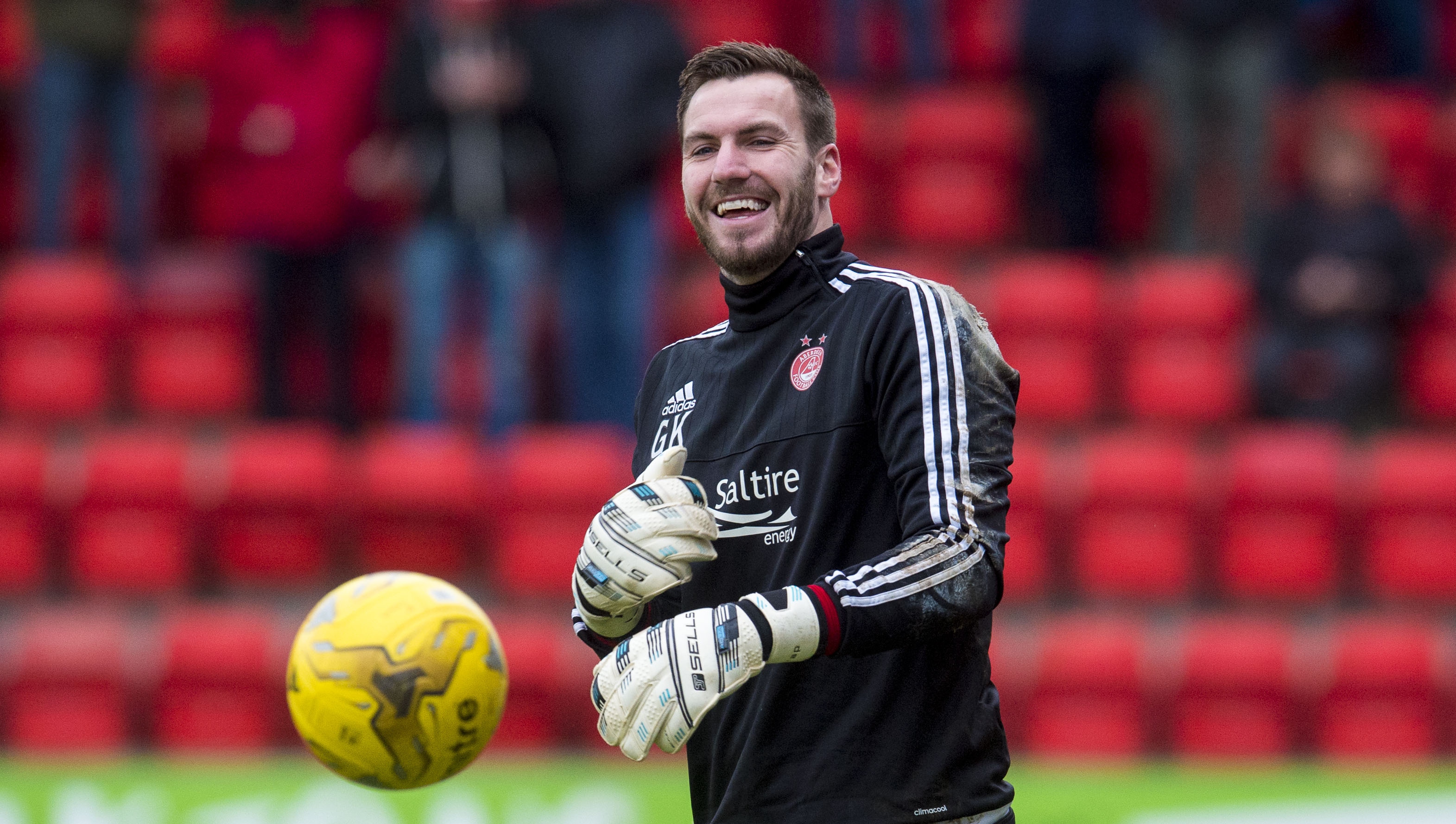 Football cliché loves to talk about the “game of two halves”. For Scott Brown, this has been the season of two halves, the first spent understudying Danny Ward as he made such an impact on loan at Pittodrie, the second placing his own indelible stamp on the Dons’ impressive campaign as we pursue another season of steady improvement.

He returned to the colours against Ross County a few months back, a game where he confessed to be being both delighted and nervous to be back between the sticks.

“When Danny got called back to Liverpool I knew there was a good chance I would play. You then step things up a bit and it is nice to have something to prepare for at the end of the week.

“Luckily, against Ross County, I managed to make a good save early on and that set me on my way. As a goalkeeper, if the first thing you do in a match is positive that helps massively and you are not chasing the game so to speak.

“It was a very tough game and it got even harder when we went a man down and then a goal down.  When we went down to ten men, it was a real uphill task but we showed what this team is all about. We have 17 or 18 players who want to play every week and want to win every week. We stuck in there and got a very good result in the end. I had a couple of saves and did ok but the best moment was when I heard the full time whistle!

“It is sometimes difficult as a goalie because you can make three or four decent saves but then let one in in the last minute. Everyone then suddenly forgets about the saves you have made before in the game. The most important thing is when that whistle goes at the end of the game and you have the win.

“It was great to be back, but I knew I had to be patient. Danny did brilliantly when he was here so I could not complain about not being in the team. He was great and that is why he is back at Liverpool, that is why he is pushing Simon Mignolet. He has a massive future ahead of him and will get his chance down there soon. I have spoken to him a few times and we will keep in touch and I will go down the road to see him at some point.

“Adam (Collin) has come in and I have enjoyed working with him. I know if I do not play well enough then there is a chance I will not be in the starting XI. It is the same with every position and it is the way it should be. Sometimes people make a bigger issue out of it when two goalkeepers are going for the one spot but, as I say, with every position you have players fighting it out for a spot in the team.

“Every time you pull on the shirt for Aberdeen it is a big game, you have to accept that if you want to play here. Every team wants to beat Aberdeen because they see us as a top side and because of the history of the club. Teams do not look at it as just three points, they want to beat Aberdeen.

“You also have the demands of the fans, whether you are playing home or away, and the demands of the city. There is an expectancy to go and get the win, wherever we are playing or playing against, so every week it is a massive game. I think some of the media criticism of the team has been very harsh in the past, but we don’t take much notice of it. We just brush it off and get on to the next game. Your next game is the most important. That is all we worry about”.

Defensively, the Dons have certainly been tested recently. That said, they got back to doing something the team have done a lot when Scott has been in the side – kept a clean sheet. Scott is quick to point out how hard the defensive players work with him in training to perfect the best possible understanding.

“Between the four of us, whether it be Mark, Ash or Andy, we all work together in training every day and when we do defensive drills, it always gets swapped around so whoever is playing, everyone knows what they are doing. You can only build up that understanding by playing games and working hard in training”.

Scott also works in tandem with Gordon Marshall, the chance to work with a full-time goalkeeping coach one of the big reasons behind making the move to Pittodrie in the first place.

“I have to say I was very fortunate to work with Jim Leighton last year, and he was great for me. It was great having someone I could bounce ideas off, especially someone with his experience. This season, Gordon has come in and he has been absolutely brilliant. Every day we go out and we work hard. Again, we are able to talk about different ideas.

“His enthusiasm is brilliant and anything you want, he will do for you. He has worked with some top, top goalkeepers and also played for some top clubs. Gordon certainly works us hard! But the training is very good and he puts on some great sessions. I think the goalkeepers work the hardest of any at the club! I won’t say any more than that!

“We also do a lot of video work. That is something Gordon is very keen on. We will work with Greig Thomson, the first team video analyst. Gordon will just pick out little things in the opposition without saying too much. Just little things you can have at the back of your head as you go into a game situation.

“Goalkeeping has changed a lot over the years, and there’s also a big difference between playing in the lower leagues in England and playing for Aberdeen. When I came to Scotland it was from League Two in England. Down there, you just kick it as far as you can and try and pick out the big striker and then play for seconds.

“You play in League One and League Two games in England and it is all about getting the ball in behind and playing a lot of territory football. A lot of the goals come from set plays. Here, everyone likes to try and play football, so one thing I have to work on up here is being better with the ball at my feet. It is something I am still working on and Gordon works a lot on it as well, especially using both feet.

“That is something that has definitely changed it the game. Young Archie Mair who is the U15 keeper comes and trains with us sometimes. He has been on the bench for the U20s a few times this season despite the fact he is only 14. You see him in training and he is absolutely brilliant with the ball at his feet. We do kicking exercises and Archie can kick the ball with both feet to exactly where he wants it to go. He has been taught that at a young age.
That is one of the biggest changes to goalkeeping. You have to be comfortable with the ball at your feet.

“One thing that has not changed is that you need to have a good pair of hands, you need to be brave and you need to make good decisions. I think decision making is a massive part of being a keeper.

“One of the biggest adjustments I have had to make to my game since coming to Scotland is my levels of concentration. At League Two level in England, you are always involved in the games because the ball is always coming into your box due to the direct style of football that teams play.

“It is something I have had to work on because we keep the ball well. In quite a lot of the games, I am not involved for long periods and then I have to make a save. You have to keep your concentration so you can make the save when called upon.

“That is a big thing for the best goalkeepers in the world because they play for big teams who generally have a lot of the ball. I’d say the best in the world is Joe Hart, just because he is English! No, seriously, I really like Joe Hart. I would also have to say David de Gea. I think he has been brilliant and kept Manchester United in games. I would also say Gianluigi Buffon at Juventus is still up there too”.

Even the great Buffon himself would have to admit that he is at the far end of his career, but one if Aberdeen’s characteristics that has really struck Scott is the number of youngsters who keep on making their presence felt.

“In the Celtic game, he was outstanding. I thought what was really impressive was that late on in the second half, his fitness levels were very good. He looked to have more energy than anyone else. For a young lad, and a player who has had injury problems, that was good to see. The whole game, he was pressing and closing people down. He is very good at helping the team keep the shape.

“We also have the likes of Scott Wright who has been on the bench a few times. He scored a goal in training recently when he took on about five or six players, beat them all, then took on the goalkeeper and beat him. It was an unbelievable goal, it was like Ricky Villa’s famous goal for Spurs in the FA Cup final replay against Manchester City all those years ago. Scott wasn’t even born back then! Everyone just stood and applauded.

“Scott and the rest of the young boys are the future of this club and some of them will be playing in the first team sooner rather than later. We also have Scott McKenna and Michael Rose who both have big futures in the game. Scott did very well during his loan spell at Alloa in January. He has all the attributes to be a top player. There is a lot of quality coming through at the club.

“That’s one of many reasons why I’m loving it here, even more so now I’m playing again. I am up here to play football and you want to play football. Each game you play is great. If you don’t play, then you just have to work hard to get back in the team.

“Every day when you come into train the standard is very high. You have to be at your best every day. There is no slacking off. I just take each game as it comes and try and do enough to get selected for the next game. That’s all any of us can do”.