On day three of the Dons pre-season training camp we spoke to Michael Devlin on RedTV. You can watch the full interview with Michael by clicking on the red button. 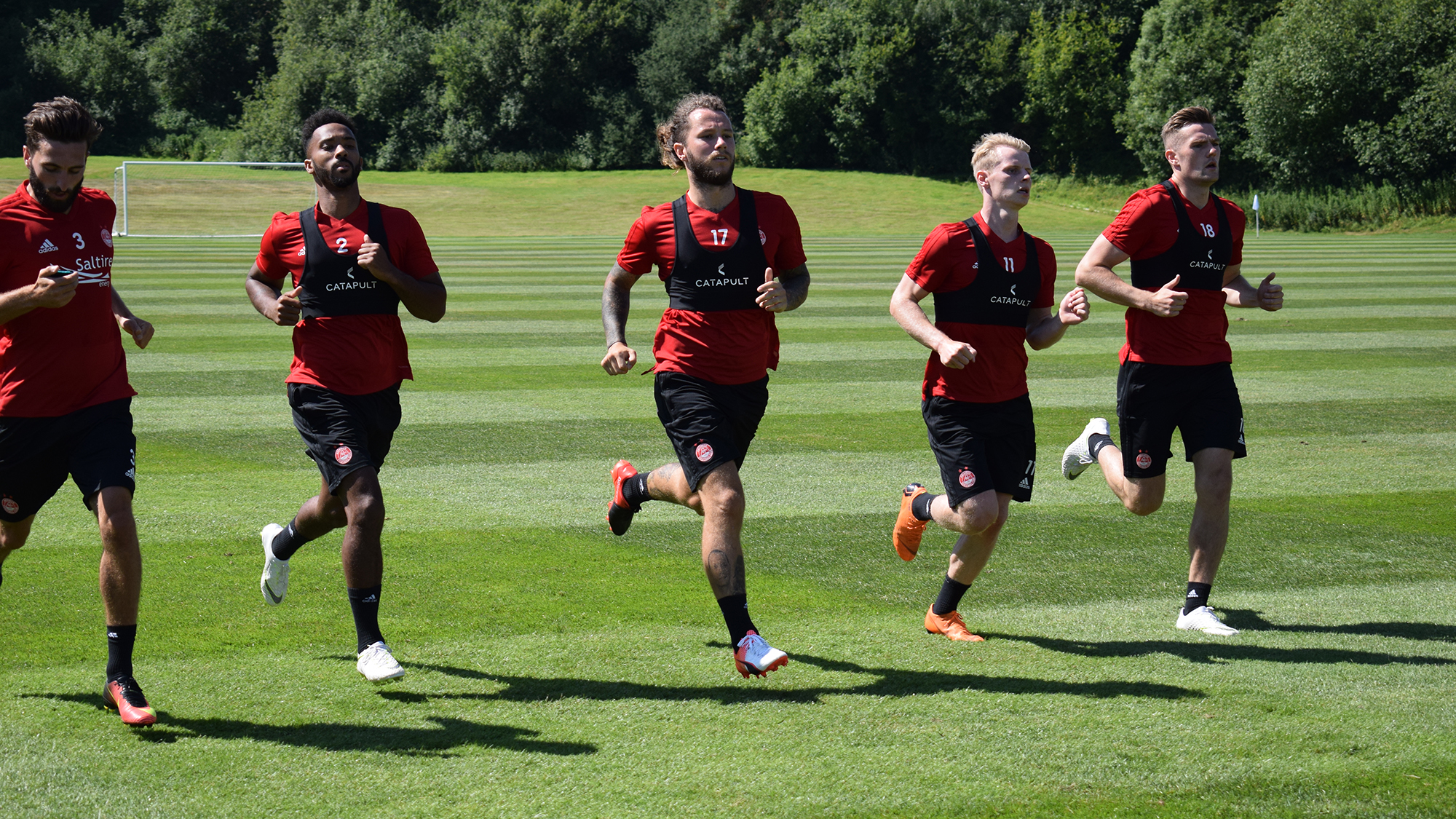 “It has been a long time coming for me to get back involved. I think I am the only one in the squad who has been looking forward to getting back into it and doing the testing and all the running and the hard work that comes with pre-season. Thoroughly enjoying it so far even although it has been hard work with triple sessions each day.

“When I signed in January, although I could not play, it gave me the chance to integrate with the squad and become familiar with my surroundings, the staff as well as the players. It has certainly helped me settle in. Fortunately I don’t feel like one of the new boys this week even although I have not played yet!

Being an Aberdeen player

“I love being at Aberdeen. I am very fortunate to be able to do something I really enjoy doing as my job. It is a very fortunate position to be in, especially at a club like this. As soon as I arrived at Pittodrie I liked the feel of the place, the atmosphere that was generated.

“It is a great group of boys, the management team are great – the gaffer and Doc and Barry Robson, the medical people are fantastic as well as all the backroom staff. It is a fantastic club to be at and I am delighted to be here. I just can’t wait to get going so that I can show what I can do.

“My knee feels great, no problems at all. It is just the rest of my body that I am trying to manage this week! I feel very good. It has been a hard 12 months since I last played, the last five to six months at Pittodrie, I have put in a lot of hard work and everything was geared towards this pre-season and making sure I was in the best condition possible to be able to compete for a place in the team during this period. Hopefully I am ready if the manager needs me in the team.

“All the hard work has been for preparing me for now and I am now ready to kick on.

“Lewis Ferguson does not look like a young lad, he has a very good physique. I did not play alongside Lewis at Hamilton but he certainly came into the team and equipped himself well. I remember on one of his first days he went into a 50-50 at training with Darian MacKinnon and Lewis put Darian up into the air. He can handle himself. I think that was a sign of his intent. He was ready to compete for a first team place and I am sure his intent will be the same here. He has not just come to Aberdeen to make up the numbers. I think he will be a great addition. 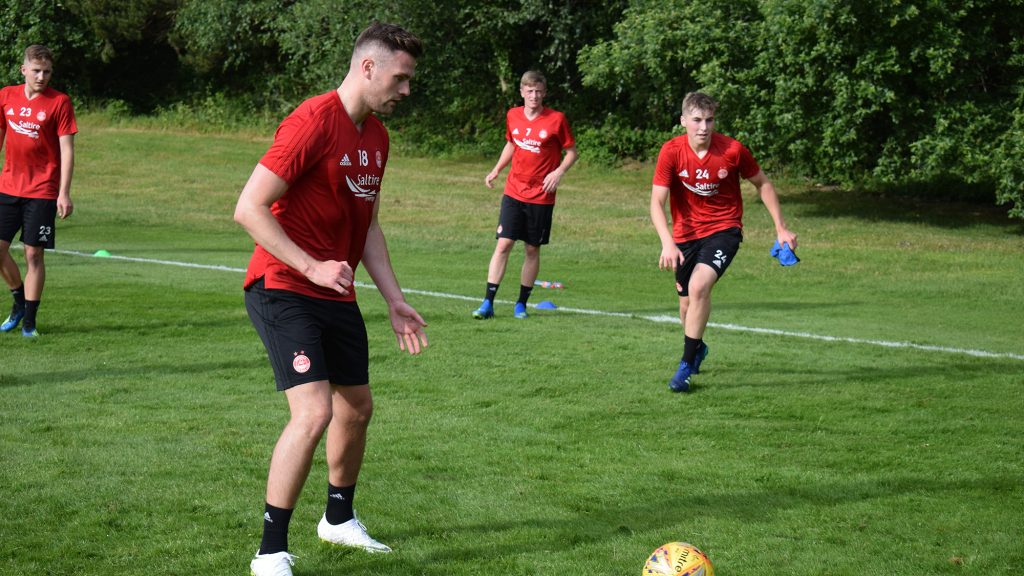 “It is a very exciting start to the season and I think it is a great draw. There are a few good friendlies coming up as well which will prepare the squad for the Burnley game. We have Rangers as well but all our focus over the next month will be on the Burnley game. It is really exciting because as a player you want to challenge yourself at the top level and see how you compare with these guys. Burnley had a fantastic season last year, so it will be very tough but it is a game we are all looking forward to. It is a fantastic game to go and play and everyone will want to make sure they are in that starting XI. It means that there is a bit of bite in the training already. Players want to impress and show what they can do.

“I think our last five games, the post-split fixtures, we really kicked on. Before that we had been criticised for our form against the teams at the top end of the table, but I felt we really stepped up and showed everyone what we were made of. We went to Celtic and got a victory and I thought it was an excellent performance as well. So we went out on a real high. We had to go and earn second spot, no one just gave it to us. We go into the new season feeling really positive about ourselves and full of confidence and ready for the challenge ahead.

“You can feel the confidence. There is a real spring in everyone’s step and everyone is raring to go. In the testing last Friday everyone came back fitter and stronger than they were at this stage last year. “It is shows no one is taking anything for granted. Everyone is ready to push on to try and improve on how we did last year.

“I first sat next to Scott McKenna in the changing room when I arrived. Very quickly we became quite close and good pals. I managed to convince him to let me move in with him!

“So we live together and also went on holiday in the summer together. I would love to get the opportunity to play alongside him. He is a credit to himself and the club the way he conducted himself when he was away with Scotland. To captain the side was a great achievement.

“Scotty has been outstanding for Aberdeen over the past ten months since he got his opportunity against Motherwell. I am really excited about the prospect of playing alongside Scott but I have enough to focus on myself in terms of showing what I can do and earning my place. It won’t be easy. There is competition for places all over the pitch. The only way I can give myself the chance to play along side Scott is if I do my job and do it properly and show the manager that he can trust me to play. That is my only priority at the moment.” 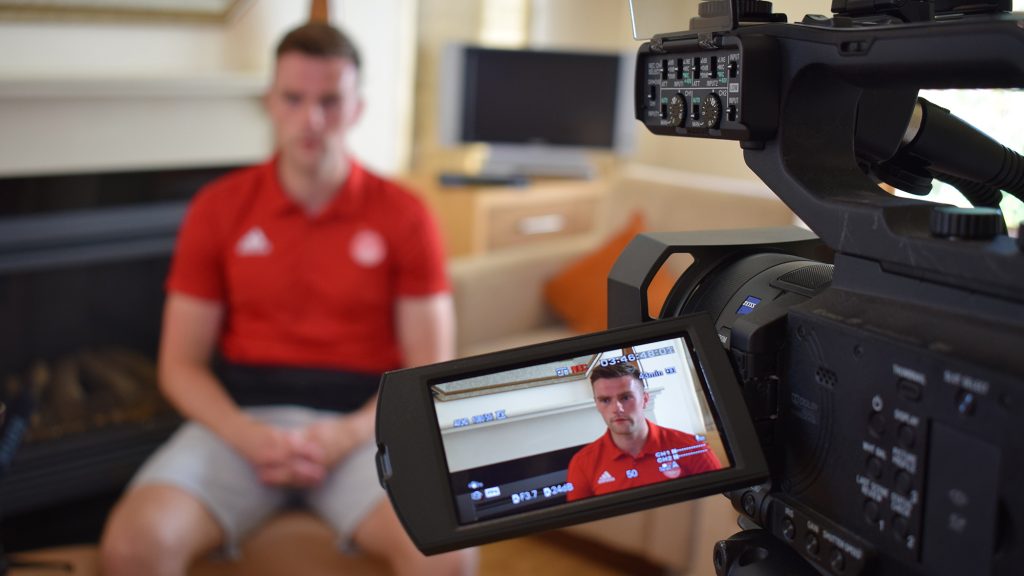