The Dons assistant manager previewed the Scottish Cup tie with Queen Of The South on Friday lunchtime. 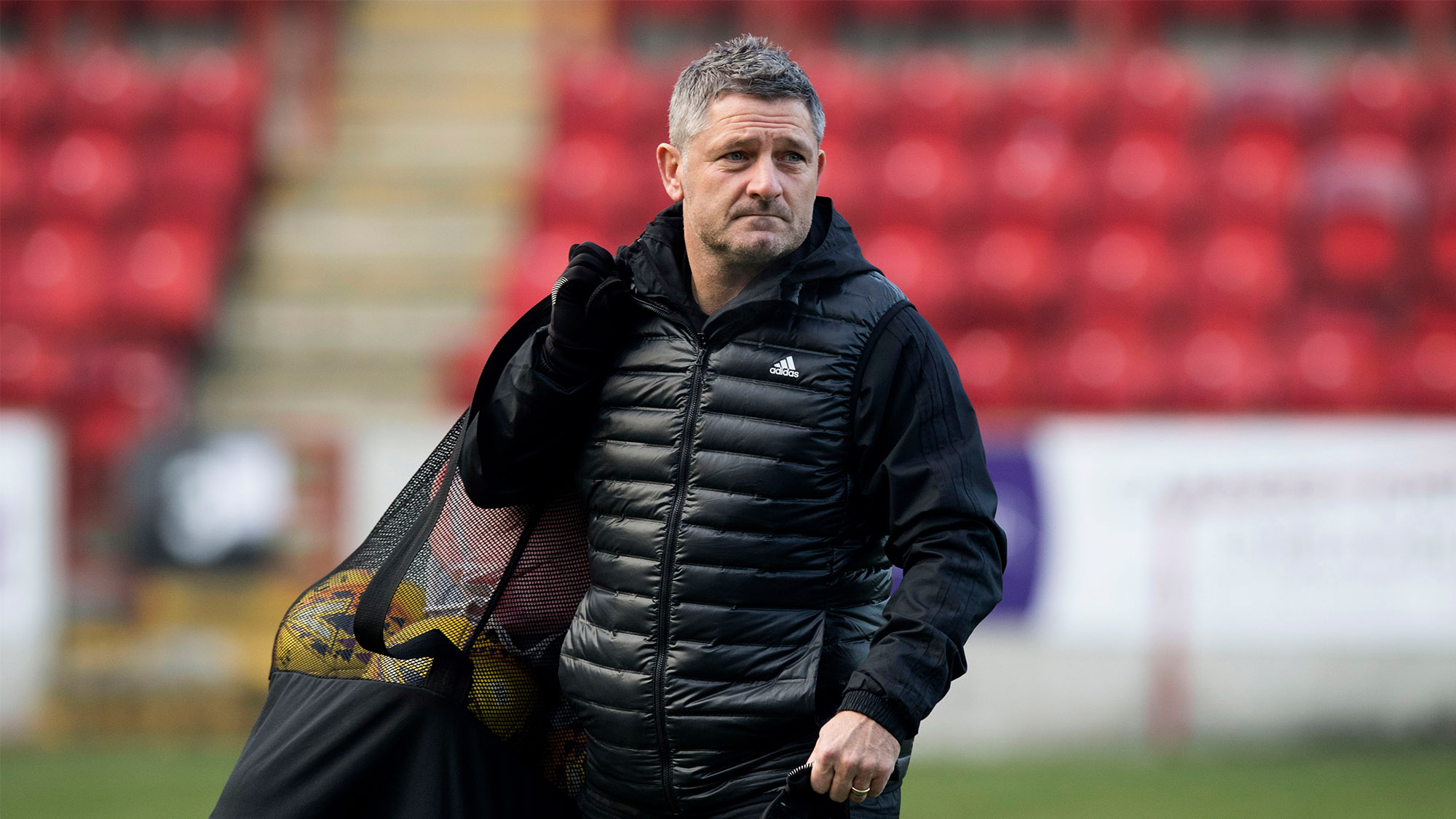 Looking Back At Rangers

The boys are in good spirits and realise the level of performance they put in the other night merited at least taking a point from it. We’ll take the positives from that and we’ll move onto a really important game on Sunday.

“We reflect on the match and I think Rangers were better first half, but second half we were the team on the ascendancy and we certainly thought we did enough to deserve at least a point. We’ll take the positives from that performance and we move onto the next match. You can’t underestimate how big the next match is. That one’s history now and the next one’s the Scottish Cup tie against Queen Of The South out there.

“The manager spoke with their manager as they do after every game, but there was no entering into dressing rooms. The manager’s have spoke and that conversation will stay between them as it should.

“Again, on reflection we did think it was a penalty kick with Lewis going through there. I think Lewis has ridden the tackle very well and if his leg’s planted then that could be a serious injury he’s got there. That’s gone now and in history so there’s nothing we can do. It’s so important we focus now on another huge game, which is Sunday’s Scottish Cup game.

“It’s something I can’t affect. I can have an opinion on it, but my opinion’s not relevant because I don’t make the final decision on that. I understand they’re looking at it and we’ll see what comes out of that.

The Cups and looking to Queens

“The Cups are so important to this club and you know that. We got to the last final and just fell short and this one we’ve got a real opportunity to get to the last eight and so have Queen Of The South. They are a team we’ve got real respect for and we’ll be treating that game accordingly. We’ve had them watched on several occasions now and know their strengths and weaknesses.

“Gary Naismith’s someone we know well and we had him on the staff here. He’s a great lad and a really top professional, one of the best I’ve and he’s taken that into his management. I heard his interview during the week there and I’m very impressed with the way he’s going about his business. We know it’s a team we’ll need to be at our best to try and beat and get to the last eight.

“On merit the game at Dens Park they did extremely well and the game down at QOS you saw it was a 3-0 win and they were great. They were in a great run of form up till then and had beaten Inverness and Ross County 4-0 so they were going into that Dundee game full of confidence and credit to them. They’re a good team and well organised and it’s well documented about Stephen Dobbie. Rightly so with 37 goals in 30 appearances and they’ve got Dykes in behind him. They’ve got Nicky Low who we know well and have a well organised and good team. There’s absolutely no chance we’ll underestimate that. They deserve all that respect and getting through in the cup they’ll be looking to go even further. We must make sure we’re guarded against that and we get our strengths over their weaknesses.

“It can be disappointing. I thought the game was fantastic and anybody coming in and watching it, as an advert for Scottish football it was fantastic. It had everything from sending offs to mad scrambles and the crowd and I think it was a great advert. I’d rather speak about the football than anything else and speaking about us specifically. We were pleased with the level of performance we put into that in particular that second half and we thought that level of performance merited at least a point from the game. It’s history and the league business is finished for this week and we look towards cup competition and we’ll do our utmost to progress to the last eight.

That day we were the same in terms of our approach, but we just never got the second goal. We treat every game in it’s merit and there’s no game bigger than the other. The biggest game’s the next game and the next game’s Queen Of The South at home. Absolutely we’ll treat them with the utmost respect. We’ve got real respect for their manager, staff and players and we’ve watched them on several occasions. We’ll be ready for that challenge and we’ll make sure we put our game across there’s and get ourselves into the last eight.

You’ve got to see the bigger picture, but the big picture now is out there on Sunday. If we do well and if get the performance needed to get the result then we’ll progress to the last eight and we’ll see where it takes us. Whenever you get a home tie in the cup I think you’ve got to try take advantage.

“McLennan’s hopefully back and touch wood he’ll be back. Scott McKenna will miss out due to suspension, but everyone else’s fully fit. Mikey Devlin’s back in the squad and trained this morning so McLennan in is a positive, but McKenna being suspended is a negative.

“Mikey’s really good. He’s an integral part of that dressing room and he was doing so well and got himself involved in the international set up because of the level of performance he was putting in. He’s a big figure in the dressing room and big figures are even better when they’re playing and contributing to the team. Mikey’s been about training the last week and there’s been a real difference. You’ve noticed it and the atmosphere about the place has been fantastic. If you came in this morning you would have thought we’d been beat the other night. That’s down to the players realising the level of performance and the stage we’re at and how important it is to keep that confidence and remain positive about every game. Mikey helps with that.

“When the window closes that’s your squad you’re working with and we’re really happy with that squad in the dressing room. It’s a tight squad in terms of numbers, but the quality’s there and we’ve got players in the dressing room who all expect to play. There’s a real level of competition and who fights for each position and it’s healthy. We’ve all got the same aim and all want to be as successful as we can first of all in the cup and the first opportunity’s to do that on Sunday. Then we’ll carry on the league campaign once that starts at St Mirren. The full focus at the moment is the Scottish Cup and it’s Queen Of The South. They’re in our way and we’ll need to make sure we deal with that.”