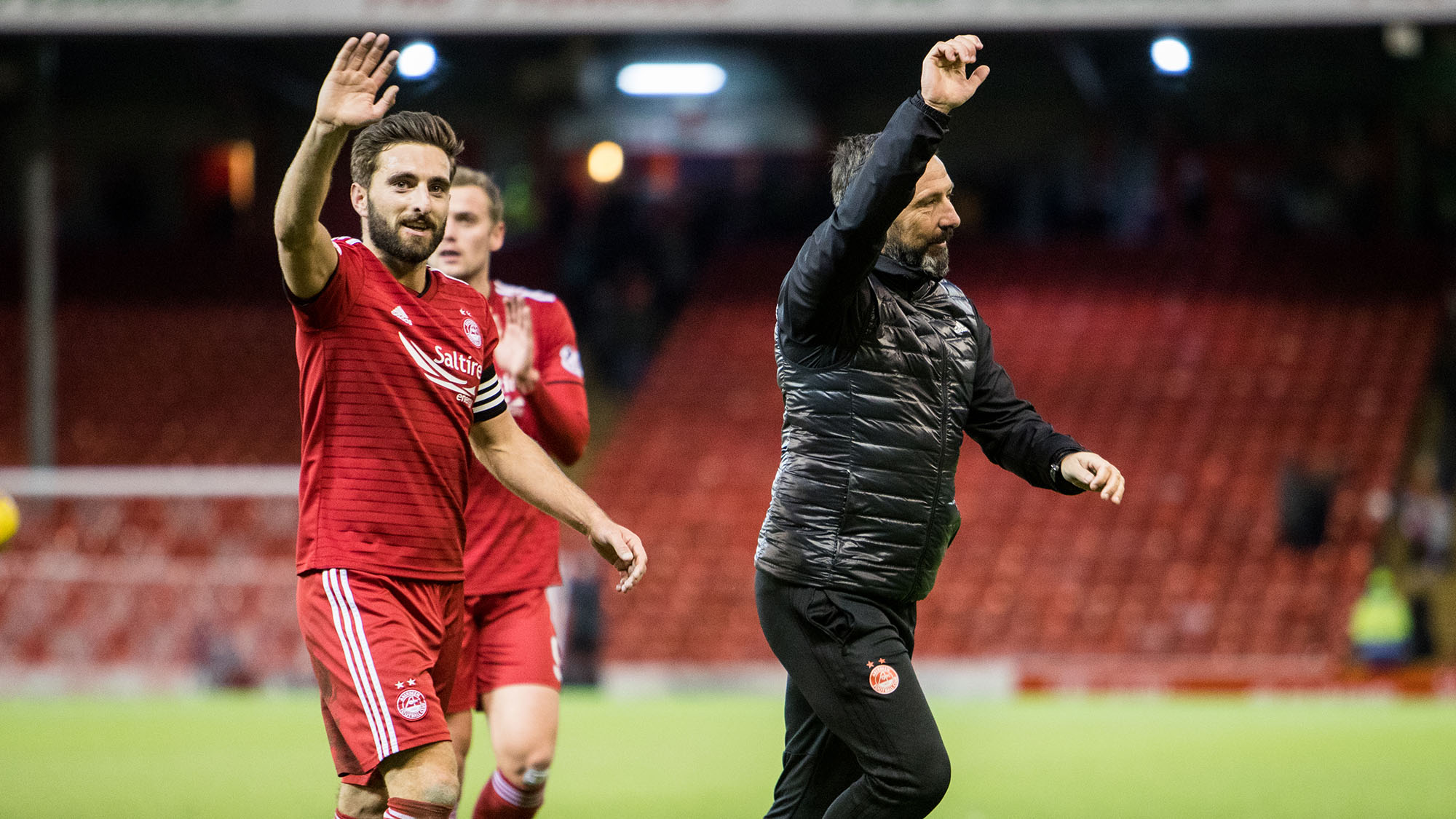 Reflection on the game

“I’m very pleased to get through. It wasn’t straightforward and credit to Queens.

“Gary’s got them going well and they came up here with loads of belief and were very organised. We were just looking for more intensity and pace to our play and we got bogged down a wee bit after an initial decent start. I thought we defended very well throughout and kept their front two, who can give any team problems, at arms length. Other than the brilliant strike from Dobbie, who showed his quality.

“I said at half time that it was important we had calm heads and also recognise we had work to do. We needed to bring more speed and more drive to the whole performance – and we got that second half.

“I thought it was an almost perfect second half performance with four goals and loads of control to the game. Even the response to losing the equaliser from Dobbie’s strike was good as well.

“It’s great McGinn comes on and makes the contribution as you’ve see with our subs recently, who have all played a big part in helping the game go our way – and none more so than Niall today.

“He scored with almost his first touch and chipped in with a couple of assists. I thought the shape of the team was far better and it was no slight on Stevie May’s performance. He was doing fine in the game, but we just felt we needed to stretch the back four a bit more and then we could get Stewart and Shinnie closer to Sam Cosgrove. All in all, it wasn’t straight forward. and we had to dig deep for the result, but it was very good second half performance.

“It was never going to be straightforward. I think people would have seen this tie as us maybe wiping the floor with Queen of The South, but what you see in Gary’s team is a good level of player who are very well organised. It’s never easy and they’ve beat a Premiership team to get here and we had to dig deep for it. While the scoreline reflected on the dominance of the second half it was maybe a bit harsh on Queen of The South as well because they put a lot into the tie. They are a very good side and I’m just pleased to have overcome that challenge.”

“It’s important that we’ve got players of that quality to turn to. We wanted another wide player and it was between him and Connor and Niall’s got that experience, knowhow and calmness in these situations and we thought he was the right one to come on.

“Certainly, it paid dividends and it’s good for me as a manager to have those options on the bench. It’s great to get Devlin on the pitch as well, albeit at the expense of Shay picking up a little ankle knock – hopefully he’s ok. Hopefully Mikey can get a good week’s work now and step his work up.” 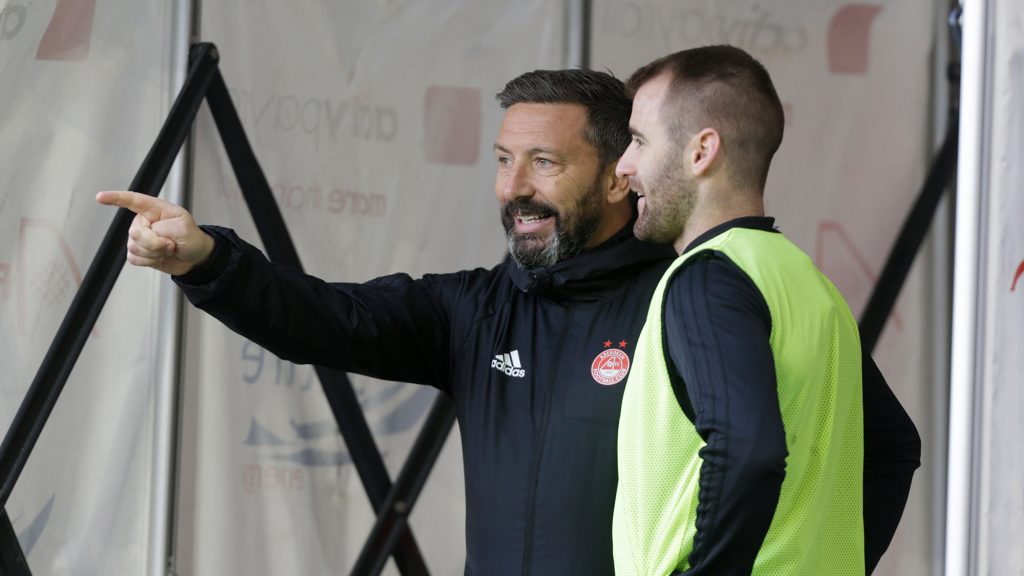 Reaction For Second Half

“I think we were all looking for a bit more at half time and we spoke about bringing more speed. It’s about getting that balance and having composure and getting control to a game. Also, a bit more drive and life to the forward play and I thought we got that second half. Lowe and Logan were higher and driving on whilst McGinn and Mackay-Steven offered us a lot more.

“Then you start to see the influence of Stewart, Shinnie and Sam when he started to get decent service into him. I thought the way the second half played out was what I was trying to get from more of the game. You can’t expect to get it all your own way, but I thought we did that for the majority of the second half.

“The improvement and stats are great for Sam and his confidence. We’ve spoken often enough about the importance of a striker scoring and having that confidence and belief. We had a striker here for many years in Adam Rooney who would always get to that 20 goal plus mark and scoring penalties.

“A penalty has still got to be converted and Sam’s looked very comfortable as Rooney did in these instances. I think Sam’s form is a testament to his hard work and he’s is improving and looking like a proper centre forward who’s getting his goals to match his performances.

“I always kid him on that if he didn’t wait until December to start scoring, we might have been top of the league right now!” 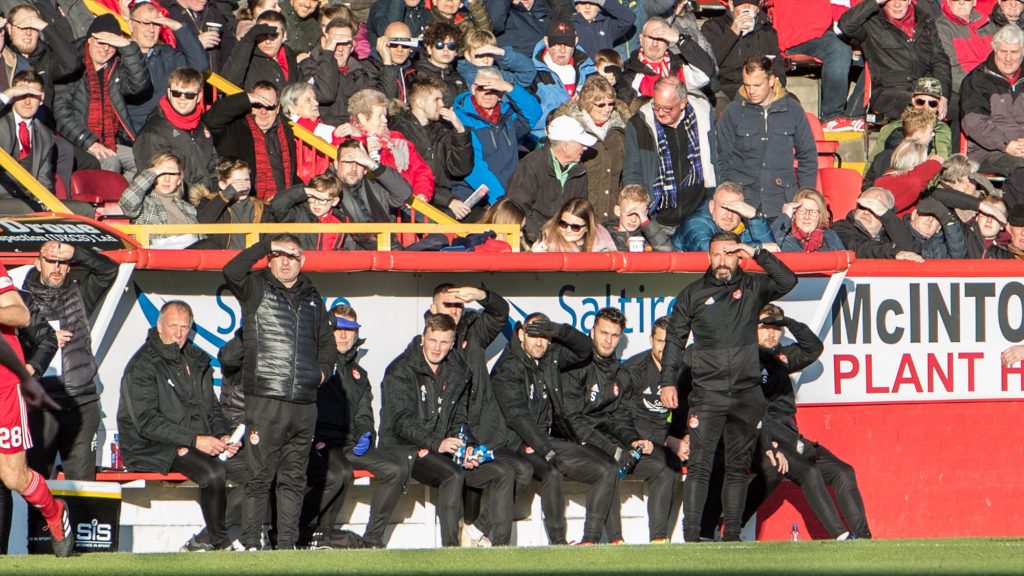 Niall “most important thing is being in the hat”

Niall “most important thing is being in the hat”