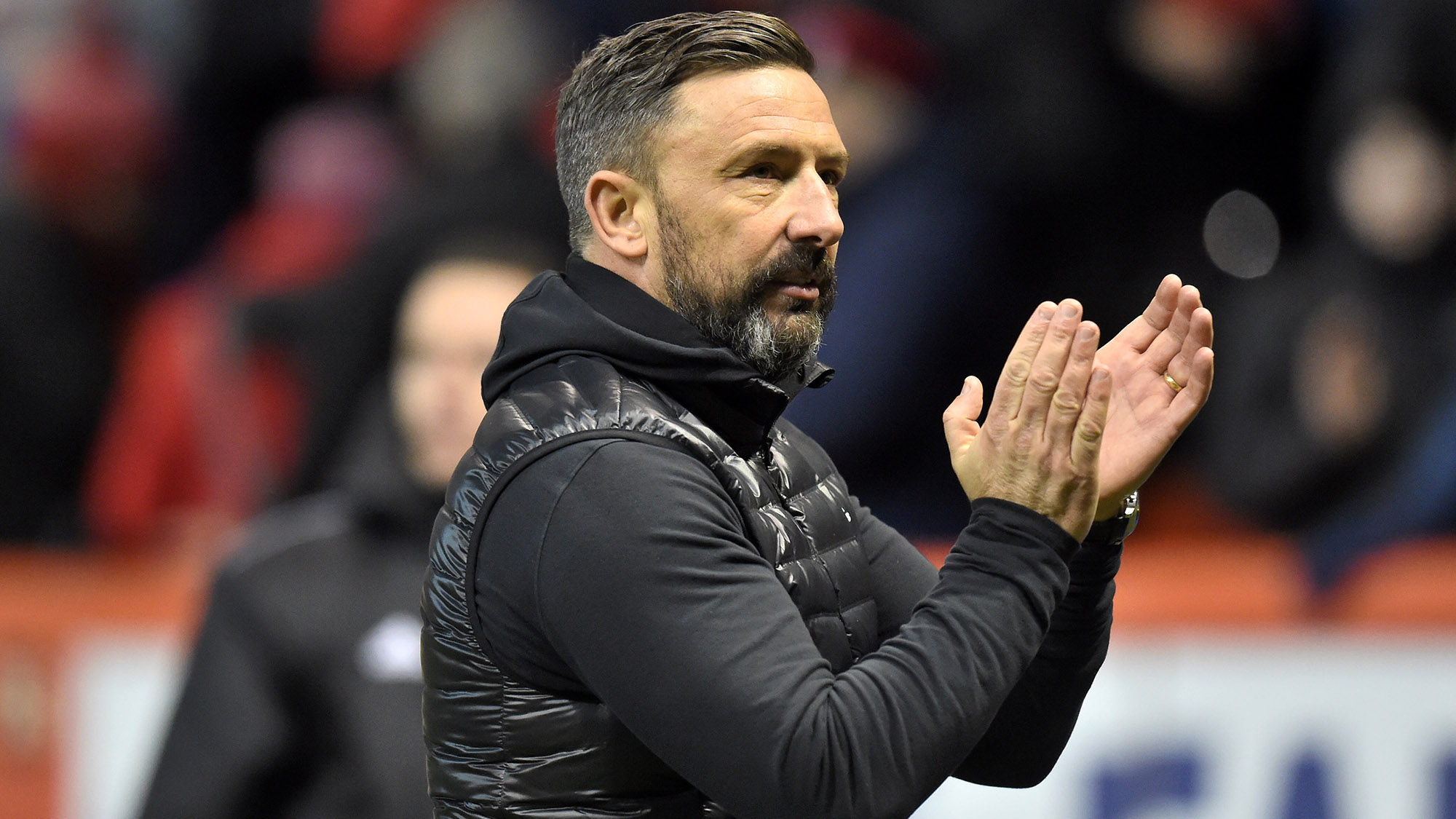 Reaction To The Win

“We had a great start in the game and I thought the players came out of the traps with a clear intent to get after Hearts and cause them problems.

“We get the goal that our play deserves and it was a good run and cross from Stevie who puts it into an area for Sam. He’s still got a lot to do, but what a brilliant header. It’s not even about the power, but it’s just making sure he’s got the direction on it – a fantastic goal. It set the tone for us and I thought we were very good after that. I thought we were the dominant team and past up opportunities to get the second goal. I was really pleased with what the players were giving us and we kept Hearts attacking threat to a minimum.

“I’ve got to say though Joe Lewis makes a great save when Hearts were bright with their free kick. It was a very important save and I’ve seen Joe do that time and time again for us over the years. I thought it would have been harsh on us to go in 1-1 at half time as we were by far the dominant team.

“We spoke at half time about trying to reproduce the start in the game that we had. I think we’ve had two games more than Hearts and I was a wee bit concerned with the physical part of the game with the output of my players. I thought there were little stages in the second half where we couldn’t get close enough to them. That said we were keeping them at arm’s length, but I wanted us to assert more pressure on our play.

“Max then went down, which is far from ideal and I thought there was a little 10 minute period where we took Shinnie out the middle – although I thought he was outstanding at left back – and we lost a wee bit of his bite and aggression in there. I think the subs helped and it was unfortunate on Stevie’s part to come off because it was just tactical and to get the bodies through the middle again. Once we got Gleeson and Campbell on I thought the two of them help bring us that element of control back to the game.

“The second goal was a real shot of adrenaline for us. Getting the penalty kick knocks the stuffing out of Hearts, but we felt home and hosed after that and I felt we were very comfortable. We saw the game out pretty confidently and delighted to get all three points against a tough opponent. I know they’ve had tough times recently, but I thought we were the better team today.

“It was three very important points.” 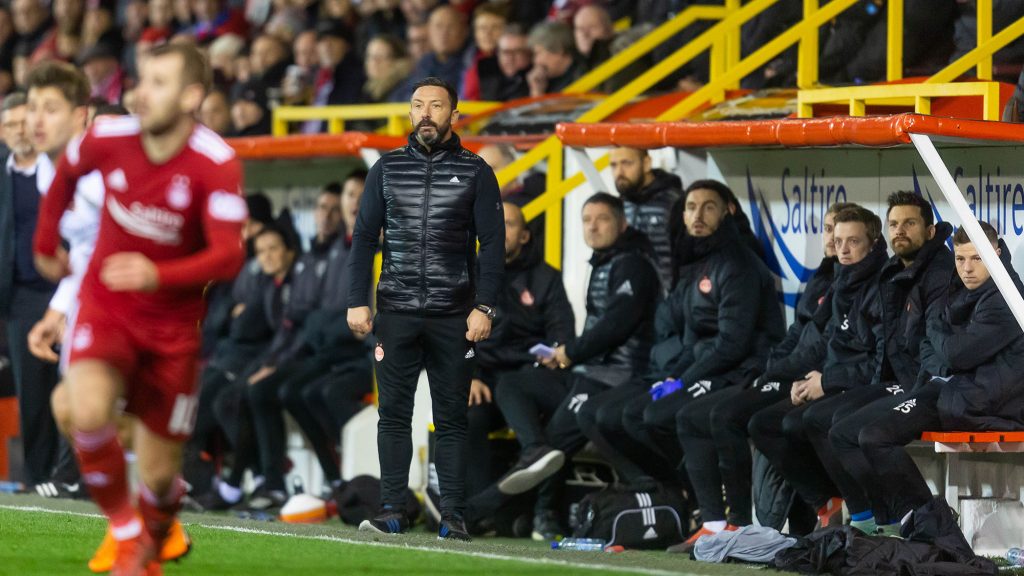 “You can see the boy’s confident and overall today he was outstanding.

“His first goal would probably remind you of a Duncan Ferguson. His general play has been pretty good of late anyway and I always feel like he’s contributing, but it’s easy for me to say that and support him. People and supporters look at the goals and he’s a young boy in terms of football years and game experience. We’ve got some young boys out there at the minute clocking up some apperences and Sam’s not really had that. He’s learning the game with us at a club that’s demanding, but he’s learning quickly and he’s doing his job well. His overall game was the performance of a very confident player.

“He’s doing very well and hopefully he can maintain his form because we do have expectations of our strikers and he’s doing his job very well at the minute.”

“Sometimes that’s standard from Craig and Hearts. They are always looking for penalties. The only one I can think of is Naismith with Max Lowe when Steven MacLean gets his chance and Naismith goes down.

“At Tynecastle they got two penalties. One of them was particularly soft and one of them was never a penalty when Naismith bundles into the back of Lewis Ferguson. We felt a real injustice that day and Hearts got more of a break that afternoon and these things happen. I can’t remember any other incident to be honest other than that one I mentioned when MacLean’s unlucky not to score. Let’s make it clear the better team won today.” 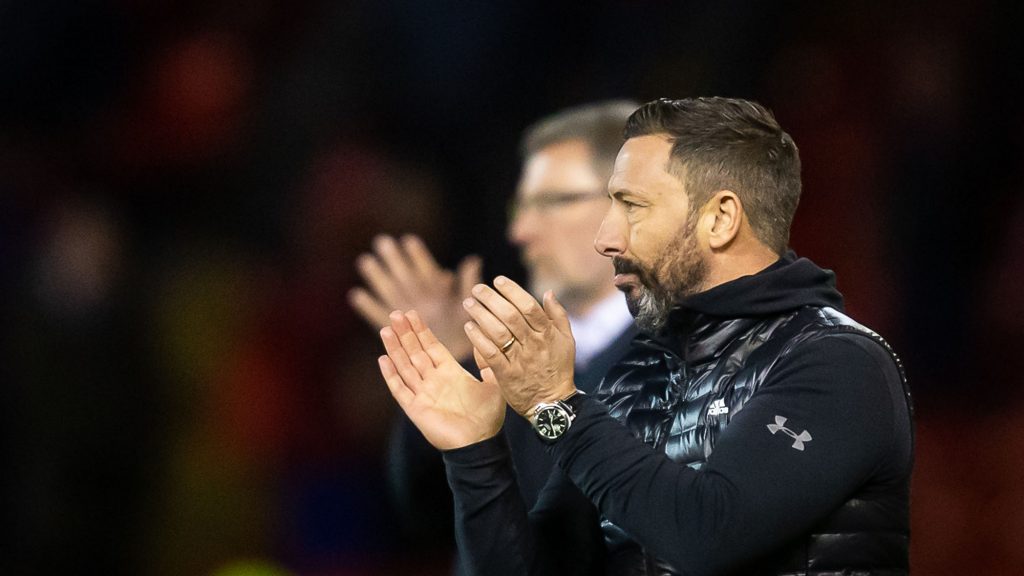 “There was a decision to make about who came on for Max and we went for Dean due to his size. Max was picking up for us at set plays, but also for balance with Shinnie moving out there putting in another lefty alongside Lewis. It was clear we needed another midfielder in there and I thought Steven Gleeson, Dean and Lewis were really influential in there.

“Ferguson was outstanding today and just when you think the game might be going away from us he steps up again and gives more and that’s the sign of a good player.

“We’ll see how Max is. We’ll get him in tomorrow and we’ll have a look at it. It was far from ideal, but he does put a lot of yards in and a lot of high intensity but hopefully it’s not too serious. You can say he must be a real doubt with the game coming so quick. We’ll see how he is tomorrow.”

“There’s two games left in a really busy month of football, but it looks as though we’ve got four defenders out. Although Reynolds is back training yesterday there’s no way we could put him straight into a game after being out for so long. It leaves us a wee bit tight there for numbers and we’re hoping Dom Ball’s going to make it. He’s got a wee thigh strain so hopefully he’ll be alright. In terms of the game if we can be as strong as we can be selection wise and physically then what a great game it is. It really whets the appetite. You always want the Boxing Day fixture to be a home game.

“You saw the crowd today, it was a fantastic support for the players and they were liking what they were seeing. We’ll need more of that against Celtic because they do provide the toughest challenge for any team in Scotland, but they are a team we feel we can beat. The fact that we’re going into the game with a lot of players’ (games) in a good shape, we’re confident and with a full house hopefully it’ll push us towards that desired result. Its been tight games with 1-0’s in all three games. They’ve won recently in the cup final and there wasn’t a lot in the game. We found a way to win at Parkhead and I expect it to be tight. Hopefully there’s a winning performance from us. 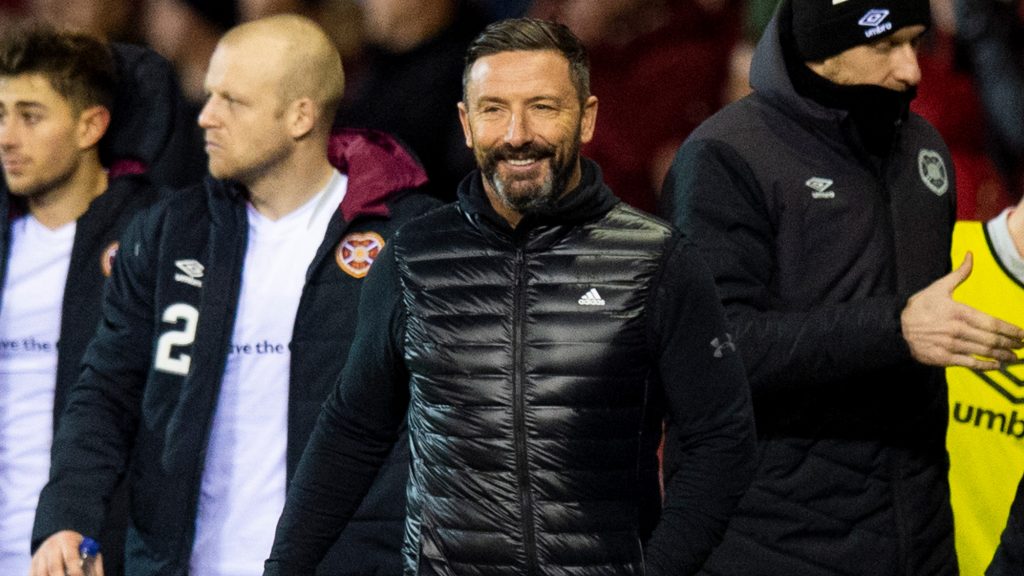