Derek McInnes spoke to the media on Thursday morning. 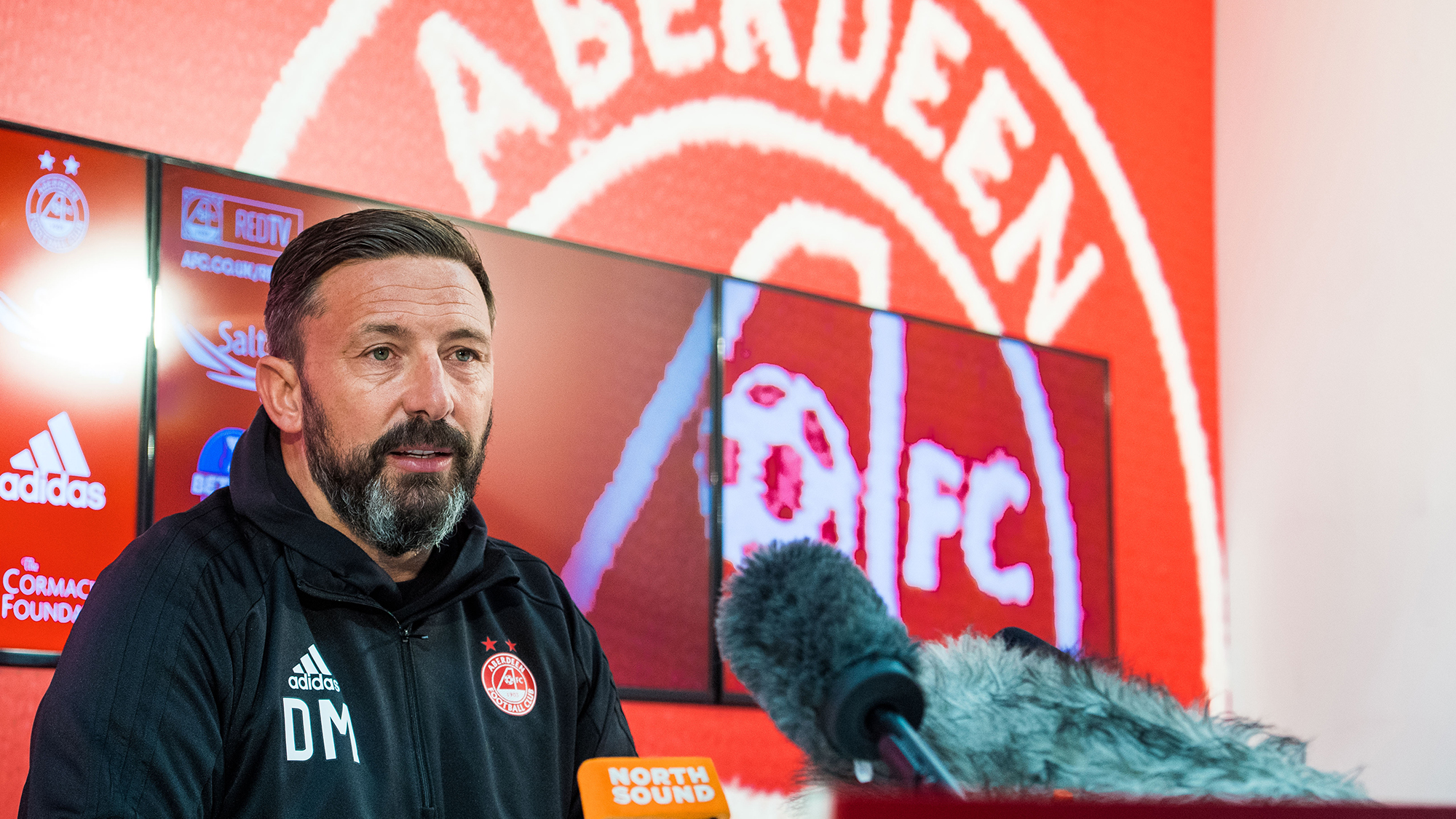 “We’re delighted (with the rescheduling). Both ourselves and Hearts have been working together in the background and trying to get a better natural conclusion. Obviously, you aren’t going to please everybody, but I do think that trying to squeeze both games in the same day at the same venue was always going to be problematic and an unpopular decision. That’s how it played out. The semi-finals are showcase events and games and there’s four big clubs carrying a big support with big expectations so it’s important we maximise each of the games. In doing so and taking one game to Edinburgh and one game to Glasgow if the games had to be on the same day, then it’s better that way.

“I’ve said all along from my point of view in the football department we don’t actually care where we play. The game is too important for us and from a supporters point of view it’s important we try and get as many of our supporters there. I think this will now give us that opportunity.

“I’d be happy in Edinburgh or happy in Glasgow and now it makes it easier on our supporters to get to the game. Aside from all the public issues having both games in Glasgow would have caused, which was something of a concern, Aberdeen’s concern is to get our supporters there and as many as we can. Now that it is a 4.30pm kick off hopefully our supporters really respond, and we get as many as we can down there and show a real strength and solidarity for our club and that level of support for my team.

“Hopefully we can make it a good day. Ultimately when you work hard to get to this stage there’s enough on the game anyway and hopefully we can get a strong support down to help our cause then all the better. What a game it’s going to be. Hopefully now after the next couple of days we can just focus on the game because at the minute the focus has been on the actual fixture and the venue rather than the actual excitement of the game.

“I kind of understand that to be honest (Celtic’s concerns). I don’t know how they (authorities) came to the conclusion and we were all struggling to find how they came to the conclusion last week. We just got told yesterday when our game would be and that’s all my concern. Like I said I’d have been happy with Glasgow or Edinburgh, but these things are always difficult to please everyone. I can maybe understand that they aren’t happy.

“I think they probably underestimated the public opinion and underestimated the need to look after the supporters, which for me is never healthy. You’ve got to have a high regard for the supporters as they are the life blood of the game. I understand it’s difficult for people to make these decisions and to try come up with the right answers as it’s not satisfying everybody. I think supporters have been more catered for by this decision.

“There’s so much going on that’s good in Scottish football at the minute. From good managers, good players, clubs improving, and I think we’re in such a healthy state and there’s been too much talk about this, referees, compliance offers and appeals; The product is good at the minute so it’s important we try and talk up our game rather than talk it down. We’ve had a tough week in trying to explain that and hopefully we can get back to talking about the football because we’re in a really good state at the minute and hopefully we can all move on.

“I think it’s good we’re in the semi-finals and we have this problem, but we’ve raised it time and time again. We have to go for early kick offs at different stages of the season all over and supporters find a way, but when it’s a semi-final and you’re trying to get as many people in the ground.

“We’ve had Saturday morning kick offs and we understand supporters of different clubs have to come here for early kick offs, but it’s a semi-final and surely, we want to have as many people in to showcase our game. I’m hoping we have more semi-finals ahead of us and I’m hoping we can get to a cup final and concentrating on that game.”

“We received a fast-tracked notice of complaint for Scott McKenna’s challenge on Saturday, which we strongly deny and we’re waiting on the outcome of that. For me there’s no malice there and there’s no serious injury to the player. It was a kicking action in terms of a clearance and wasn’t a lunge as is being reported. It was Scott running at speed to clear the ball with his right foot and because of that the two players have gone into each other. I can accept in some pictures it doesn’t look great, but it’s a clearance, it’s a football act. He’s not just ran at the player and lunged into him. For me the referee dealt with it at the time and I’m sure if the referee looked at it again he wouldn’t be issuing a red card. I’m very surprised and disappointed that it’s been raised. We’ve denied there’s been any serious foul player there and we’ll wait on the outcome later today.

“It was a huge shock to us all because we weren’t expecting it. We were astonished to be honest and Scott was surprised as well. Like I said it was a clearance and his follow through from that is when the two players have collided. The player’s not seriously hurt as well, so all that taken into consideration, it was a shock to Scott when I told him as it was to myself when I got told. He’s trained as normal and is still preparing to be involved on Saturday and hopefully the right decision is made this afternoon.” 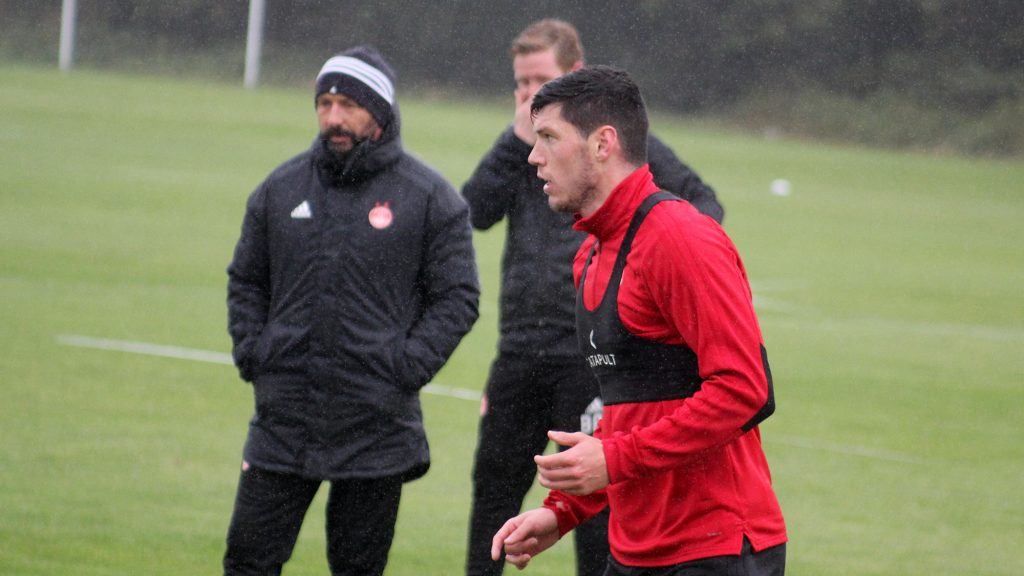 “There’s been a pattern since the new manager has come in and he’s trying to make the team harder to play against. They’ve obviously had a few sore results and firstly I’m really disappointed St Mirren felt the need to make a change right away after the manager gets the job in the summer. To see a manager, lose his job in Allan Stubbs so quickly is ridiculous to be honest. They’ve made a change and they had a positive result against Celtic. You can see a pattern of play that they were trying to make themselves difficult to play against and still carry that threat on the counter attack as they did against Hibs on Saturday and Hibs win the game from a set play. They had a sore defeat in between against Hamilton, but I think Oran will be trying to find out as much about his players as he goes along.

“They’ve earned the right to be a Premiership club and they’ve got good players St Mirren. We expect a tough game. We ran out convincing winners here last time, but it needs to be said we were very good on the day and brought a lot of speed and movement to the game and were clinical with our finishing. Something similar would be nice, but we fully expect a tough game and the onus is on us to try and deliver a performance.

“I was pleased with our performance last week and gave ourselves a chance to get a result at Celtic Park. The goal we lose is unfortunate from our point of view because there’s not really a lot we can do to stop that. We’re a bit unfortunate to not come away with at least a point. We take the positives from that and the fact that we won last time out at home and we want to try and make sure we win this one.”

“I brought James with that intention. I think James plays better with a partner and we brought him to the club with the intention to be that. We bought good centre halves in that gives us the options of going with a back three at times and we do have that flexibility. Ultimately it was to try and get two strikers on the pitch as much as we can. Obviously, every game is different, and it depends on the players available, but having James available for the last three games has allowed to do exactly that.

“Sometimes you don’t always become more attacking or carry a more attacking threat just because you’ve got two strikers on the pitch. You’ve got to make sure you’ve still got that element of control and sometimes I go with one striker, as it lets us have more control of the game, which ultimately maybe allows you to create more chances in the game. We feel we’d like to get two strikers on the pitch more often than not. We look at each game in isolation and try to impose ourselves on teams certainly at home. We’ve just got to carry as much threat as possible without being negligent to our work to trying to keep clean sheets.”

“It was another penalty (for Bruce) and he stuck it in like he did at Easter Road. Celtic go down to ten men in the game early on and it’s still a big result going down there and winning. We’re pleased with the level of performance from some of the players and Bruce has been part of that development squad as well. It’s important that they still get that game time because although it’s a reserve league it’s still a development league for those younger ones and it’s good for them to get that game time. Being part of a winning team is obviously good for them.”

“Defensively we’ve been able to settle down there, but with McKenna’s issue now that may or may not be the case. Hopefully there’s some common sense there. If we can keep a settled defensive line that gives you a platform. We’ve always been strong there over the years.

“James Wilson coming back and available for us gives that added edge at the top of the pitch. Young Lewis Ferguson will be back, which we’re delighted with. We still have Frank Ross and Scott Wright still unavailable, so we’ve not had our troubles to seek in terms of injuries this season and getting a settled team on the pitch. I do feel certainly the level of performance last week gives us encouragement, not that I needed it and I felt once we got a settled team on the pitch we would be as strong as we have been.” 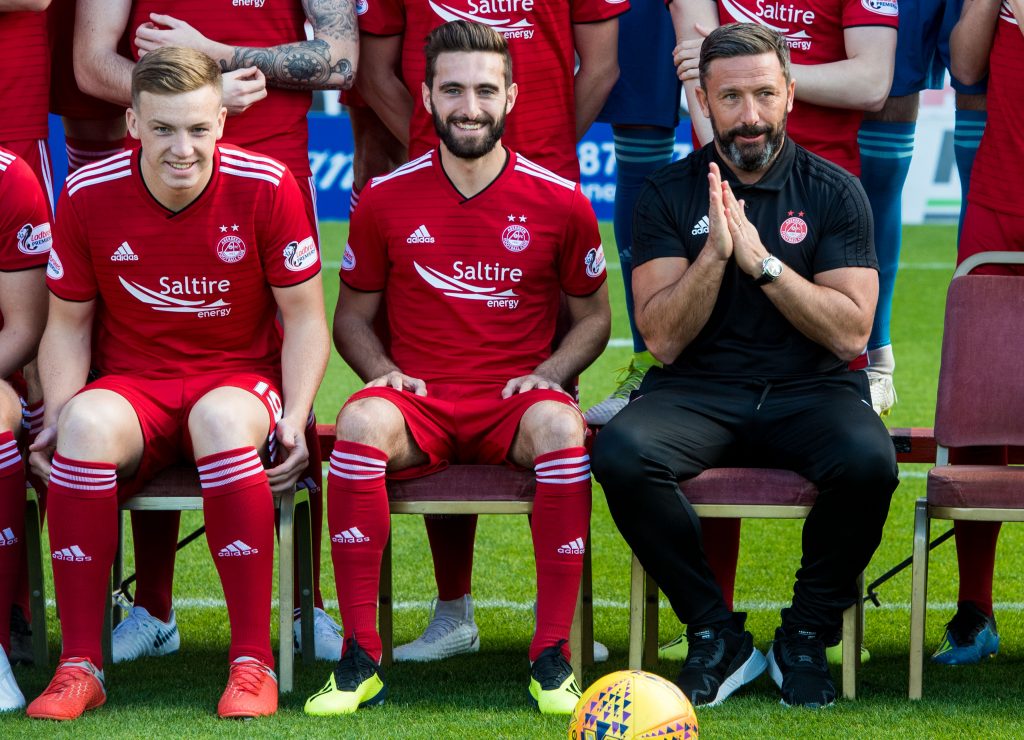 Lewis Ferguson is back in the squad for Saturday.