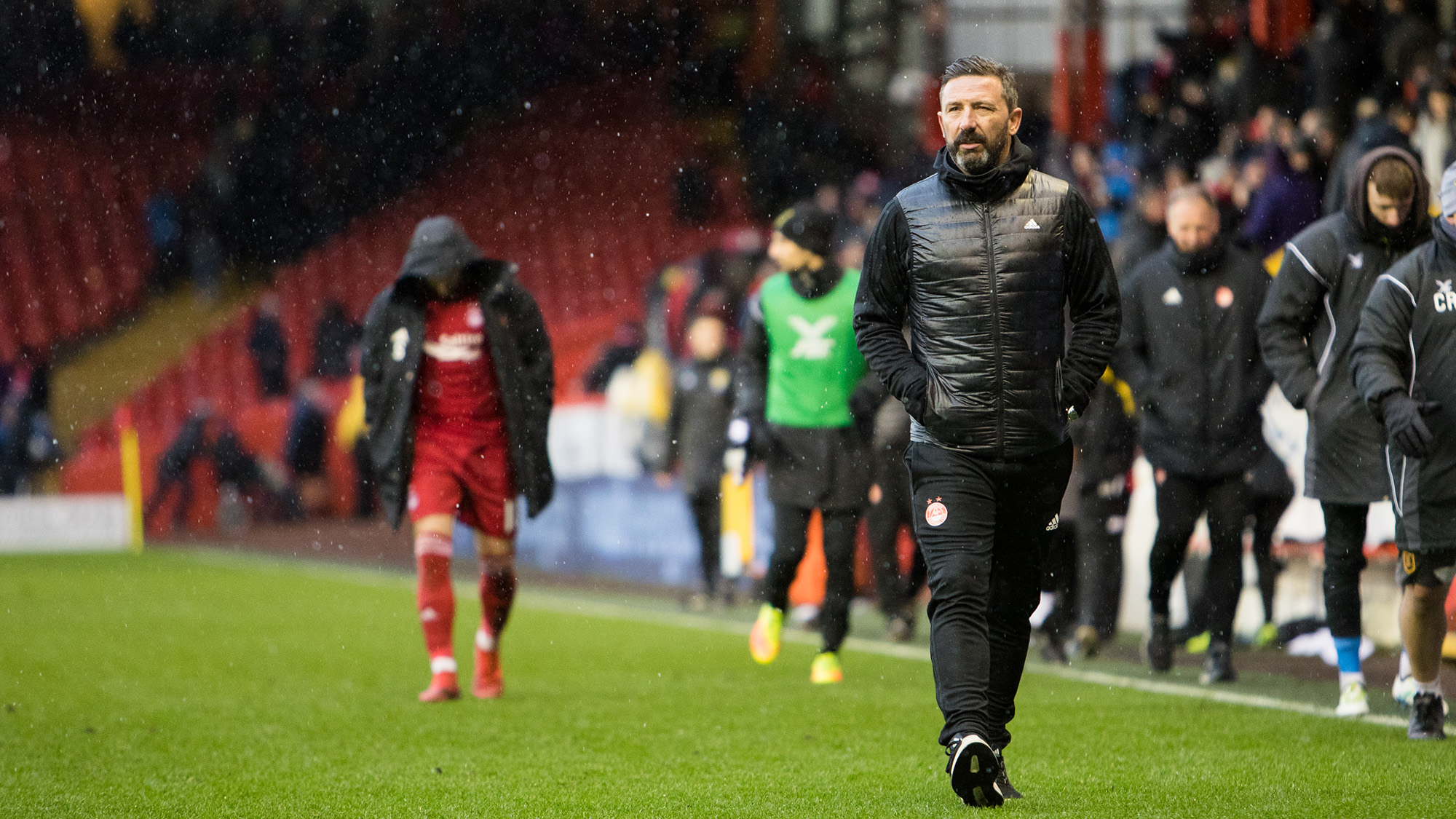 Another disappointing result at home

“We’re frustrated by the result.

“We spoke before the game about how we’ve made the challenge more difficult at home with some recent games against Hamilton, St Mirren and Rangers by losing the first goal, so we wanted that real concentration to make sure we defended well with the same authority that we’ve shown in recent away games.

“Prior to the game I was always concerned at the effort the players have put in over the last three games against the Old Firm and this game coming at the end of it and making sure we still showed enough energy to win.

“It was important that we didn’t allow that to be a factor by getting off to a good start.

“It was difficult conditions and I thought Livingston really got after us and made sure we didn’t get it all our own way. They were quick, bright and looked fresh and got after us. Once we got the goal I thought it was our best spell for ten minutes after it and one goal should have been enough today.

“For us to concede the type of goal we did today from a free kick so far out – it wasn’t a free kick in the first place and the referee’s got it badly wrong – we should still see that off. If we defend with the same authority and calmness that we’ve been doing of late (it’s cleared), but we got sucked in, didn’t win the header, allowed the man to get off us and they get the goal.

“That’s what Livingston are.

“They’ll put the ball into the box, ask the question and you’ve got to stand up to it. We’ve defended really well in the last three games, but we concede a goal that we shouldn’t be losing. It should be 1-0 for us, we should have been leaving with all three points, but we had it all to do second half.

“The onus is on us in the swirling conditions and I just felt a lot of my players were running on empty. I’ll support my players through this and it’s tough being at home at the minute. Today we should have been going away saying it wasn’t the best performance, but we won the game 1-0. Instead we’ve allowed Livingston the equaliser.

“We tried to keep the energy in the team and were looking for that wee bit of inspiration. Greg Stewart’s still not fully fit, but we were just hoping for that one moment. He nearly got it for us and it was a great block from Sibbald. There were two teams there with ourselves – we weren’t at our best second half and Livingston were so competitive throughout – so it would be hard for me to sit here and say they didn’t deserve the point.

“I do feel the players who can make the difference in these types of games were maybe lacking a wee bit. We’ve been here before, but after getting the first goal we should win the game and that’s the biggest disappointment.

“I’m here to support my players and there’s no criticism towards my players for the performance. I’ve seen what they’ve put out there in the last few games and it’s not easy doing what they’ve done to take Rangers on here, Celtic at Celtic Park then Rangers at Ibrox midweek. They’ve put so much into it and it would have been a brilliant way to finish off with a dour 1-0 victory and give them that well deserved rest.

“Unfortunately, we never defended that one key moment in the game where we could have been in at half time at 1-0. For that reason, it’s not been as brilliant a week as we’d wanted it. It’s been a good week and I applaud my players efforts. A few of them are clearly needing the break. McKenna wasn’t fully fit either, but with Considine failing a fitness test this morning with his calf he had to go in. You see his thigh it’s heavily bandaged and he’ll be a doubt for the Scotland game. I had a lot of players who were putting the club first in trying to bring a performance.

“The break’s come at a good time for us and we’ll dust ourselves down. With eight games to go and plenty to play for when we come back. We aim to improve our home form to allow us to make it the season we want it to be.” 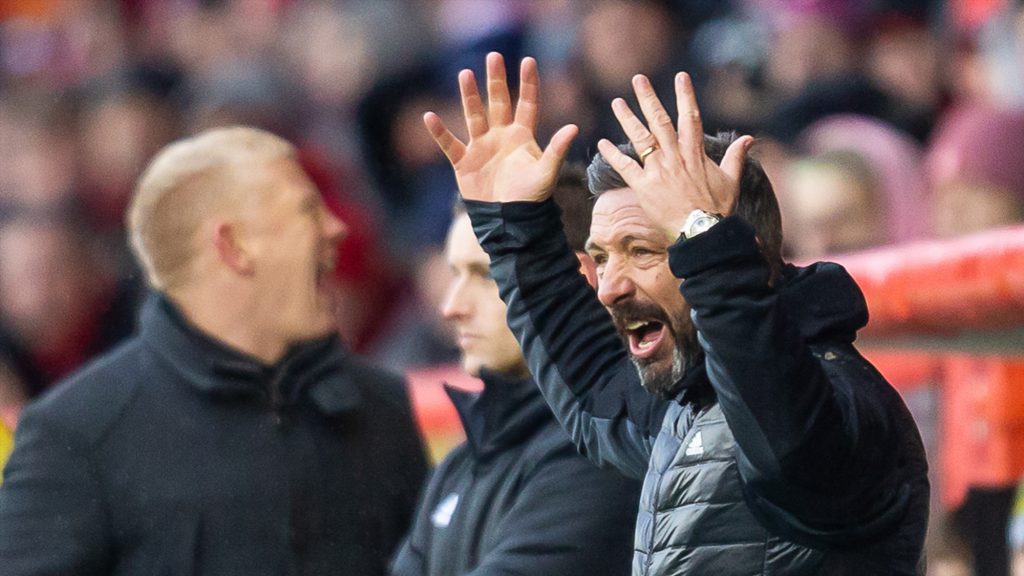 “We knew with Rangers and Kilmarnock playing something had to give, but we haven’t won. We’ve come through a tough spell and we wanted all three points. We have not lost any ground, but it certainly could have been a better day for us.”

“There were a few boys there patched up and I need to get Greg Stewart back for these types of games. I need him fully fit so he needs the rest and we’re going to have to get him shutdown for the next seven to ten days.

“Hopefully he can come back at full pelt because these are the types of games we need that little bit of inspiration from him. Hopefully Niall comes through the international games unscathed.

“We’ve pulled Connor out already because of a knee issue, but he’s made himself available for us. I’ll speak to Alex (McLeish) and we’ll assess McKenna, but if he does travel I’m not sure he’s going to be fit for that first game. Shinnie will hopefully come back fine. The others will get some much needed rest and we’ll get some much needed fitness to get them more ready to be involved when they come back.”

“I think we’ve got to be sensible with him, but the game on Thursday may just come too quick for him. You take in a lot of factors with the tightness of the thigh, the travelling, the AstroTurf pitch and the game coming too soon. I wouldn’t want to rule him out now and I’m not a medical expert, but having spoken to the physios and doctors just there they would have a real concern for him being fit for Thursday. I think he’d be fit for the Sunday game based on what they seem to think, but I think it’ll be touch and go for him for Thursday. We need to make a decision or between us and Scotland as to whether he travels or whether he stays behind, gets his treatment and be more ready for the second game.

“It would be a blow and I know how keen he is to go, but he can’t be playing for Scotland if he’s not right. There’s a few factors going against him and I think he’s up against it.”