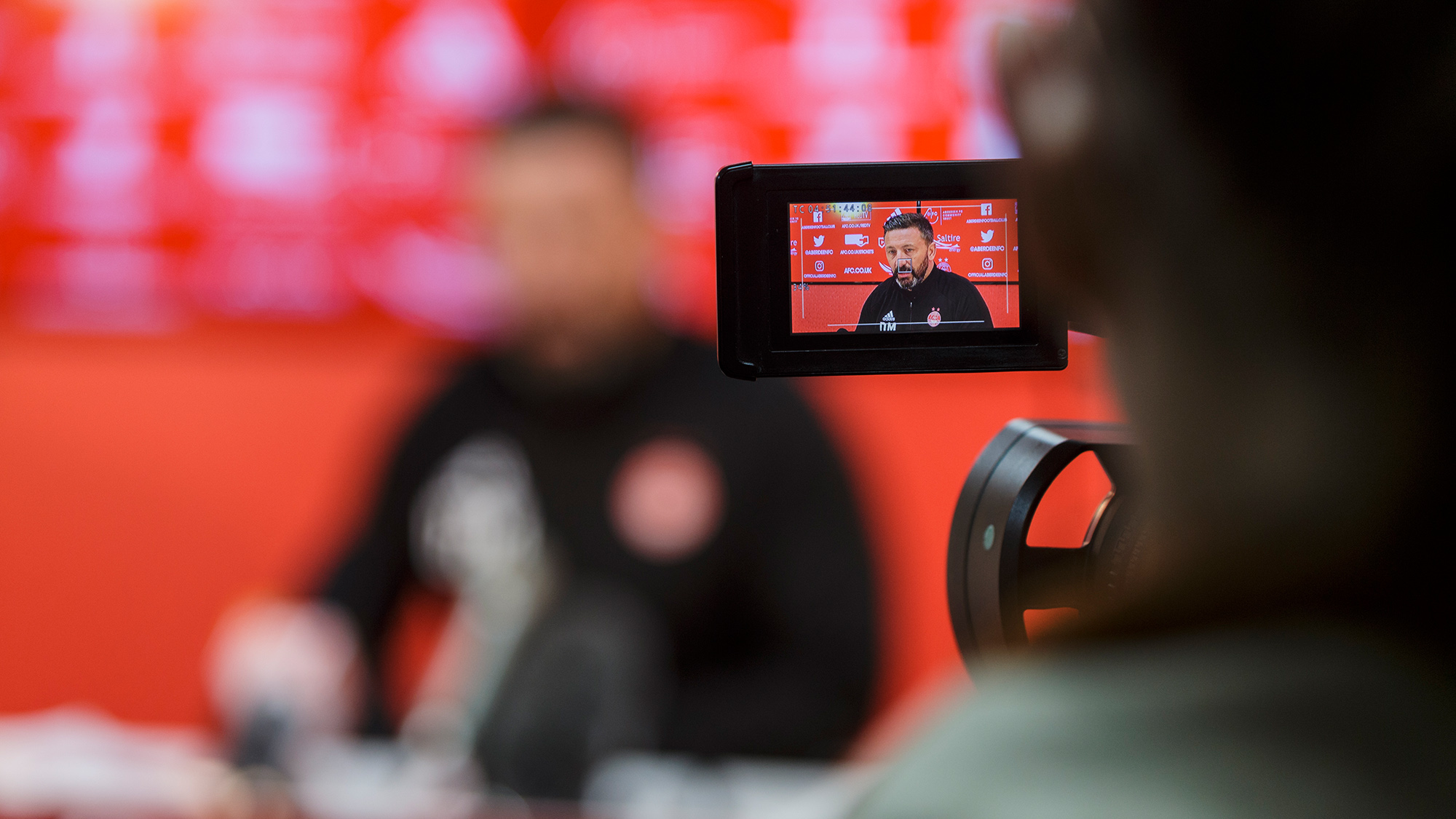 On the return to domestic action

“It was important that we got the boys settled down a wee bit. With the scheduling and the amount of injuries we’ve had, it put a lot of workload onto the same set of players to be honest. After the matches against Celtic and Rangers in Glasgow we had obvious concerns going into the last league game against Livingston.

“Even after that, with some of the boys leaving us to go on international duty there were still some concerns there. We’ve had more than a few boys whose training has been restricted for the last wee while and this break has allowed them to get the necessary rest and also the necessary time to work with the physios.”

“We’ve not won enough games of late. We’ve had some big performances and we’ve had some patches in games where we’ve done ok, but we see the challenge tomorrow.

“Clearly, it will be a tough game.

“At Tynecastle, Hearts are usually a different animal than what they are on the road. It’s a tight pitch and we will need to fight for every bit of space there and go and try and use it. It’ll be a tough game and they’ve got some good players there at Hearts and we are well aware of the challenge but equally really looking forward to the game for loads of reasons really – getting the players back, getting back to hopefully winning ways and getting the few boys who have been injury concerns of late back into full training and looking forward to trying to finish the campaign on a positive note.

“It’s up to my players to win their individual battles and to try and win the game.”

“It was only yesterday really that we got everybody back from being away and back from the injuries so yesterday it was good to get some numbers on the training pitch and more or less a full quota of players other than Shay and Gary.

“So it was good to get them back on the training pitch and get working with them again – it brings that added energy to everybody when you see them all training.

“As I say everybody’s fit and available as we speak expect Gary, Shay & Frank who are a bit longer term and will be out for the next few weeks. Andrew Considine who missed the Livingston game is back in full training so is good to go as well. Some of the boys played in the reserve game on Tuesday night and got a much needed 90 minutes into them. It was good to get everyone back involved yesterday and looking forward to the game now.

“Shay could be back for the second or third game after the split so he might get the last two or three league games and hopefully a cup final. Gary’s in the same bracket. They’re not ruled out for the season but hopefully we’ll get them back into action before the end of the campaign.

“It is important we are ready for the game. Sometimes when you come off the international break if boys haven’t been playing it’s getting that competitive element into the team and we are mindful of that. So we’ve got to make sure that we are really competitive from the first minute and show our determination and motivation to the win the game because we are more than capable of going there and winning. Like I said we are really looking forward to the game.”

How important could a win be?

“You’re always looking for that momentum at any point and it will be a big result for us if we can go and get a win at Tynecastle. We’ve had a decent result there in the past and we’ve always had to play well to win. So, if we can win it will certainly help us going into the last few two before the split.”

On Tom Crotty joining The Dons as a director

“Tom is a really good guy. He’s really passionate and keen to offer that support. Having met Tom a few times his knowledge of the club and his expertise is much needed for all the projects going forward, fundraising etc…. I think he will be a great addition to the board.”

On the reaction to the Scotland results

“It is the way normally when the national team isn’t doing well. It was a disappointing result clearly in Kazakhstan and the fallout has, at times, been irrational. A lot of it was fair but I spoke earlier in the week about the criticism that came from certain areas of the media and from certain people who directed a lot of that at my two players in particular. And unless I’m reading the game wrong, I thought it was an awful team performance. Everyone played their part in that who played in the game.

“It’s like any time when you play games, I don’t see any real benefit of singling people out. I don’t know if they would have been quite as critical about other team’s players. It’s quite easy at times to pick out one or two but my feeling on the game was that it was such as poor team performance that everyone was fair game after the match, especially at international level where everyone is so desperate for the country to do well. The performance wasn’t great, the result even worse but it’s still early in the campaign and we can still qualify but we can’t have too many nights like the night in Kazakhstan. For me there’s still a nucleus of players there that can get the job done.

“There’s no doubt for me that I 100% believe that we are capable of getting a sequence of results to qualify for a major tournament. It wasn’t so long ago after the Israel game that we were all excited about this young-looking, energetic side but maybe lacking certain things. We are not perfect clearly, but I do believe as country we are capable of getting that sequence of results that would get us to a major tournament.” 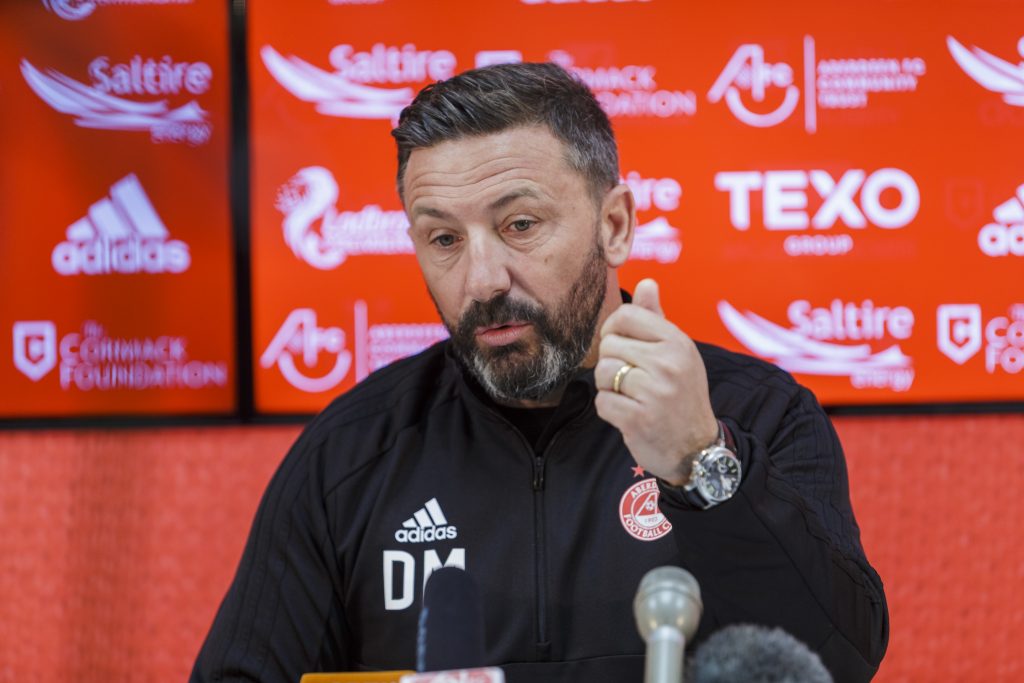 Aberdeen FC Press Conference
ABERDEEN, SCOTLAND – MARCH 29 : Derek McInnes, Manager of Aberdeen FC talks to the press during a press conference at Pittodrie Stadium ahead of the SPFL fixture against Hearts at Tynecastle.
(Photo by Ross Johnston/Newsline Media)