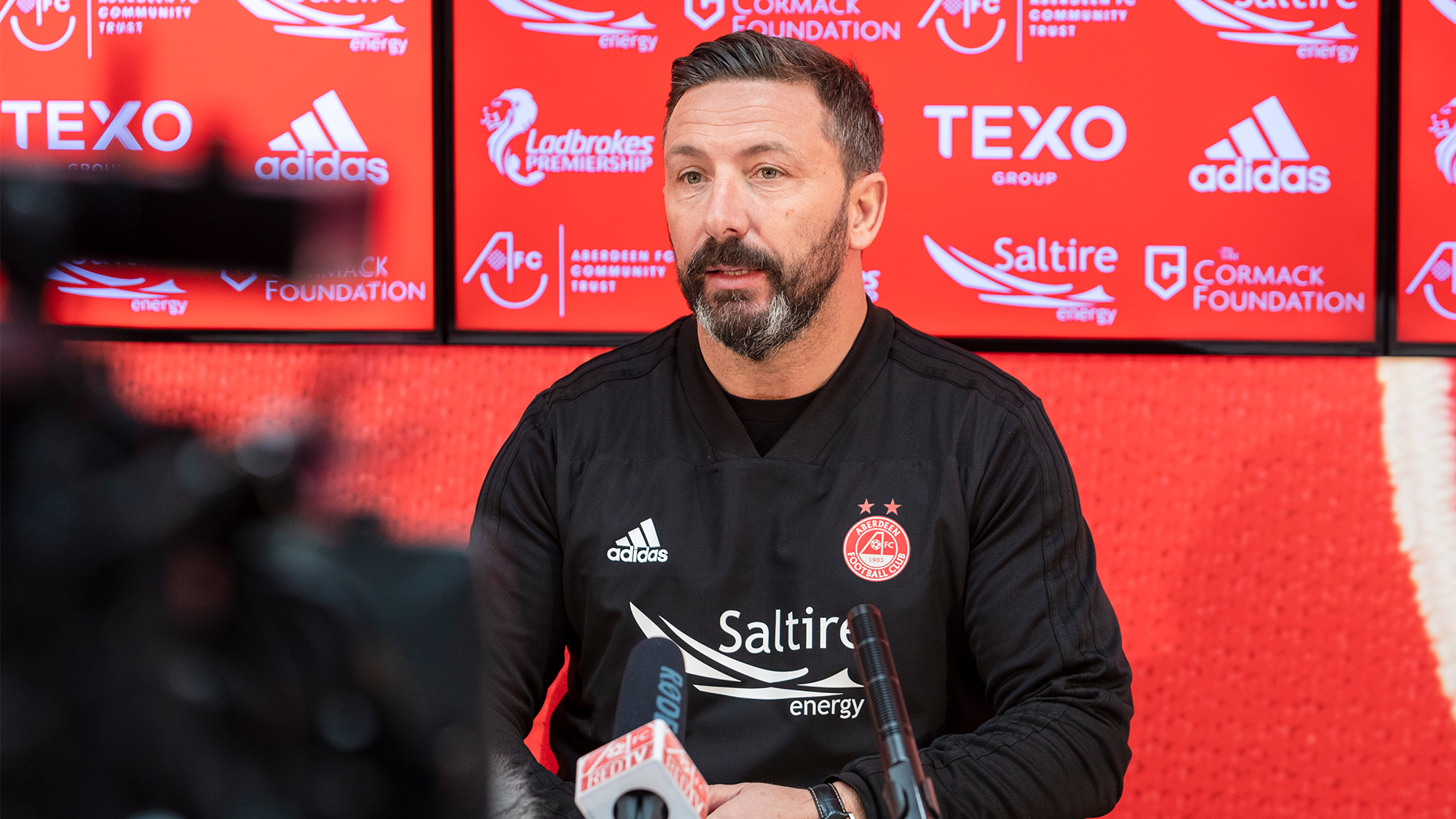 Taking confidence from the Rangers match and looking to Celtic

“It doesn’t add to the confidence as we’re confident going into any game.

“I think over the years and again this season it’s still the most difficult venue to get a result, but we go down there with the full intention of doing exactly that.

“It’s important we try and continue our strong away form in the league this year and go there with the confidence that we won at Celtic Park last season. Hopefully there will be enough players from that day that remember that can take it onto this game.

“We’ve got to score one more than them, that would be the most simplistic way of looking at it, but it’s trying to get the balance right between defending and attacking. We recognise that when you play the better teams, and Celtic being one of those, is you’ve got to make sure you nullify their threats and make sure the impact from some of their players is less, but also carry that threat.

“We’ve had two very tight games against them this season and there’s not been a lot in the games. I feel as though we have the opportunity with the players we have available to believe that we can win the game.”

Importance of a win

“It’s always important. With so few league games to go, I’ve been saying for the last few weeks how important it is to try and get as many wins as possible. The away form’s been good and it’s in total contrast to the recent home form. Although the opponent is tough we go there with the belief that we can go get a good result and finish the season as strongly as possible in both the league and the Scottish Cup.

“I expect a tough match regardless of who’s in charge.

“Celtic have had a lot to contend with but the fact that they’ve been able to turn to Neil Lennon is as fortunate for them as it for him to go back to Celtic. It’s a good fit, he’s managed their before and he’s got a strong relationship with everyone at the club, good experience and knows how to win things. Celtic have been very fortunate that Neil Lennon’s available since Brendan’s departure and Lenny will look at it as a brilliant opportunity for him.

“There’s subtle differences in the team although it’s the same group of players, but you can look at the last couple of games and it looks already like a Neil Lennon Celtic team. They play forward a bit more with more aggression in their play. Maybe less possession based, but very in your face and asking the question and are very direct with their work. He’s managed to pull off a couple of great results since he went in. As disappointed as we were to see Brendan leave Scottish football I’m delighted for Neil on a personal basis that he’s got an opportunity to go manage a club he’s clearly very fond of.

“This isn’t exclusive to Scottish football, but it’s becoming more of an issue in recent months in the game. It’s something that has got to be stamped out. I think there’s too many supporters from every club who will turn up with the intention of causing problems think they can do what they like inside a ground.

“There’s been far too many incidents of late and what it does do is shine a light on our game in a poor way instead of focussing on so many positives on our league. There’s good players, good managers, good teams, crowds are up and it’s competitive.

“I think each and every club and each and every supporter have to take responsibly because there is an element in each support who have that intention of causing trouble and crossing that line. We’ve got to make sure those people are eradicated from the game and not allowed back into these stadiums when they misbehave. They don’t have the divine right to act any way and say anything they want just because they pay into a football ground.”

“It’s difficult, but it’s also exciting as they’re great games to be involved in. These are the types of games we put ourselves up to try and deal with. The league fixtures are there and you’ve got to deal with it. The Scottish Cup replay is another exciting fixture and we’re starting to get to know Rangers really well and have played them often enough this season.

“First things first, the focus is on the game in Glasgow against Celtic, which is always a tough game, but one that’s always eagerly anticipated by myself and the players. We go down there and pit our whit’s against a good side and try get a positive result. It’s exciting and difficult, but it’s what we’re here to try and deal with.”

Response from the players

“The players knew themselves after the game last Sunday that it was a missed opportunity. We’re not out the cup and sometimes when you miss your opportunities especially in cup football you’re normally out.

“I thought we were very good in the game and done a lot to give ourselves the chance of winning the game with good chances. Maybe the chances fell to too many defenders and not the strikers, but we certainly feel that while we were disappointed we are relishing the opportunity to take that chance again. For me it’s the same game.

“Different venue of course going away from home with less support, but we’re used to that and we’ll deal with that when it comes round.

“I think it’s important for us all and my job at the minute that the message to my players is clear and that’s to concentrate on the league game first and foremost.”

“The evidence is there that we’re a strong team on the road this season. I’ve always felt our away form has been good, but this particular period it’s strong and the fact that we’ve equalled a club record shows winning at different grounds and the importance of the three points is there for us. It’s helped us because the home form hasn’t been the way we wanted since the turn of the year. We’ll go away from home against two strong sides who will provide a brilliant atmosphere that will bring the best out of my players.”

“I think the reasons given we’ve got to respect. For us on the playing side it would have been nice to see more supporters there, but it is what it is and we’ve just got to deal with it. It’s not really anything I can have any influence on.

“Whether there’s no fans or 20,000 there from Aberdeen we know who we’re all playing for anyway and anyone who can’t be at the game will be eagerly anticipating the game. So, we all have that responsibility and we know who we represent and hopefully we can get the club into another Semi-Final.”

“Gary was a doubt going into the cup game with an ankle knock, but he’s now a doubt for the Celtic game with his calf after the penalty incident. Him, Niall McGinn and Greg Stewart are all receiving treatment on knocks and hopefully all three can be available, but all three are doubts for Saturday’s game.”