Derek McInnes spoke with the media on Tuesday lunchtime 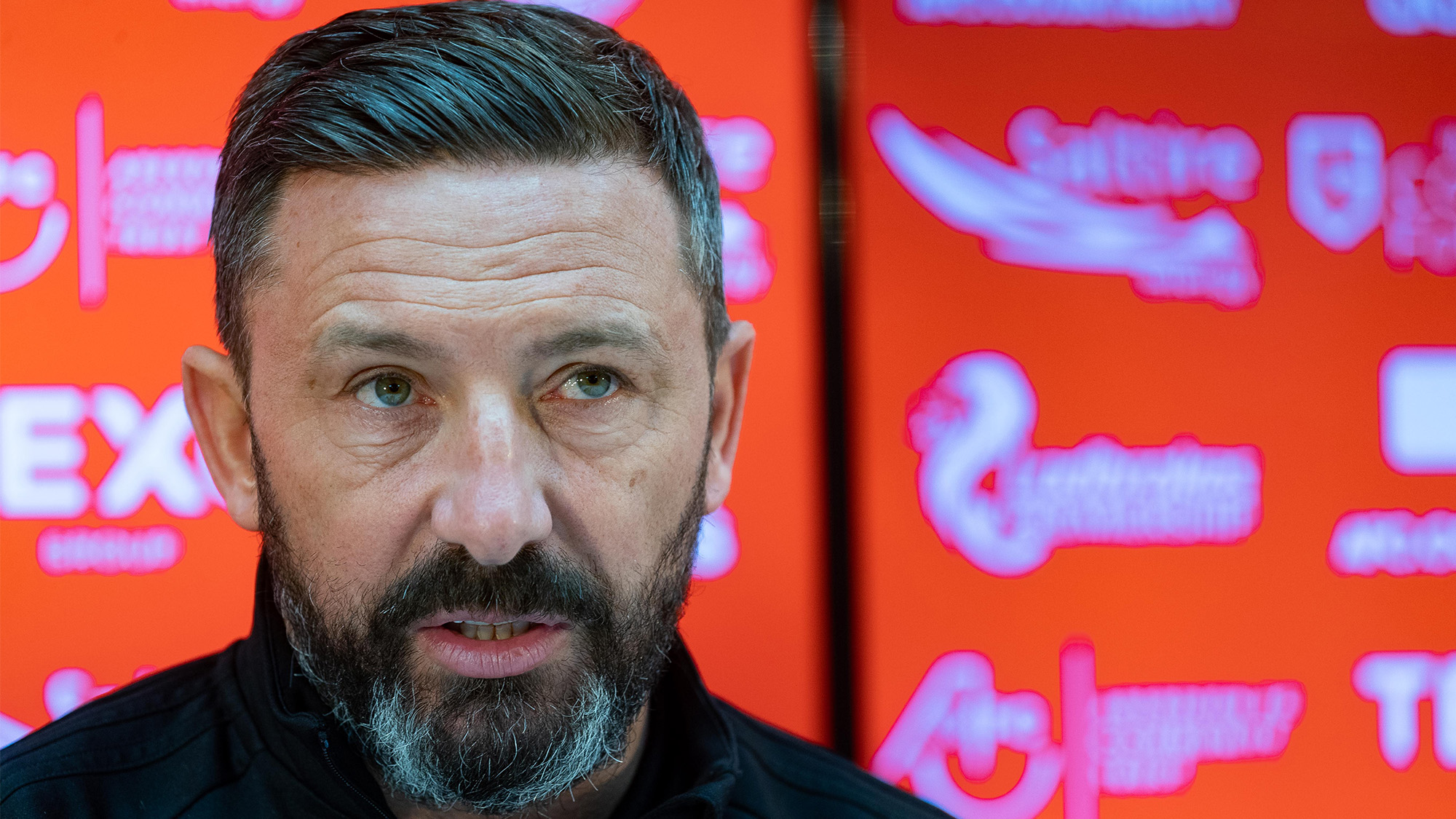 “There’s always a belief going into any game. I feel as though the way we work and with the experience we have had over the last few years, both good and bad, we feel that if we’re right we can bring a performance against any team and we can win the game, especially here at Pittodrie. We look forward to the game as it’s an opportunity. With only 14 games to go in the league every game seems to become that bit more important. It’s the same three points as the ones on Saturday and we want to go try win the game. It’s pure and simple we just want to deal with the game.

“A win just means another three points and where we want to go to. We could have dropped to fifth if we didn’t get the right result on Saturday so wherever we are in the league for now it’s not that important.

It’s just about winning enough games that when it comes to the important business end of the season, 32 or 33 games in, we’re in a position where we can hopefully have something to go for. The first port of call for us as a club is to try secure European football as quickly as possible and if we can do that then we’ll look to reset the focus. For now, it’s not about going above Rangers or getting into second spot it’s just about trying to win another game. If we can keep churning out victories until that crucial period with the run in, then hopefully we’re in a position to push on from that.

“Who knows? (If Rangers new signings will impact). In all the games we’ve played both teams have been without key players. Recently we’ve picked up results without key players and that’s the importance of having a good squad. We’ve come out the transfer window maybe a bit tighter in numbers, but we feel with the players coming back we have got enough strength there to try and deal with the challenges ahead. Rangers have made a couple of good signings and really have a strong squad.

“They’ve done a lot of good work this season with the resources they have and it pleases me no end that despite these differences and advantage in terms of money they can throw at it that we’re in and around them. Certainly, we’ll compete against them and hopefully we can do that tomorrow night.”

“It shows consistency (identical record to last year). There was a lot said at the start of the season that Aberdeen weren’t going to do this or that and it was important we just knuckled down and got on with the job and stayed quiet. At the turn of the year we are normally on course to be +70 points at the end of the season and we’re roughly where we normally are the past four or five seasons.

“We want to try make sure we have as strong a finish to the campaign as possible with the importance of winning key games. There’s still a lot to do, but we have a confidence and belief that we can finish the season strong.”

“The enjoyment comes from winning. The game itself is like any game, especially when you play against a team who have a lot of strengths. We want to play our natural game as much as we can in possession, be organised and be aggressive and impose ourselves on it when we don’t have the ball. There’s different ways to win a game and hopefully we can be good enough to do exactly that. I’m looking forward to the game and I think the players are ready.

“There’s a quiet confidence about us and a clear improvement in our performance over the last couple of games and hopefully we can show that again tomorrow.

“I don’t know if it’s an edge (previous results) but we’re just looking forward to the game. We have one or two out still which isn’t ideal, but we’ve won key matches against Rangers and other good teams in the past so we’ll hopefully try to do that again tomorrow.”

Anticipation Of The Match

“We want to go above Rangers tomorrow because that shows we’ve won the game, but it’s not the most important game. The most important thing is just trying to win the game regardless of where that takes us. We just want to try concentrate on the game. There’s enough on this fixture as we all know about for the supporters and it’s important we have calm heads. We just want to play the game not the occasion. We will concentrate on trying to deliver the performance.

“It doesn’t matter about the game. You always want a good referee and we have that. Sometimes it’s too easy to blame referees for everything, but nobody’s bothered about who the referee is, it’s just about the game. We’re just trying to make sure we’re good enough on the day. Of course, you want big decisions to be made properly, but I’ve never went into a game overly worried about who the referee was. It’s just about making sure we bring a performance.

“Sam did a bit of work today contrary to reports he never trained yesterday.

“There’s still a wee concern and we’re hopeful he’s making those improvements. Likewise with Joe he’s confident he’s going to be ok to play. We’ll have Connor McLennan and McKenna not available but Devlin will probably make himself available for the bench. He’s only trained fully the last day or two, but it will be good to have that defensive cover that we didn’t really have on Saturday. It’s good to have Mikey back available.

“Last week I spoke about getting these games out the way and maybe having a bit more clarity in the next week. Myself and Graeme decided to get these games down and maybe when we work from Saturday to Saturday next week we can maybe have a chance to thrash it out one way or the other.

“It’s good to see them kicking off with nice promising starts. We have all the games watched with our loan players. Mark Reynolds contributed to a good win as well (for United) and I spoke to Bruce on Saturday. He was frustrated he never scored more, but he’ll bring Dunfermline exactly what they need and he’ll bring that goal threat. Scott Wright had a lovely calm finish with good composure and he’s up and running with Dundee. We wish them well and even if they’re not scoring they are contributing to the clubs challenges.”