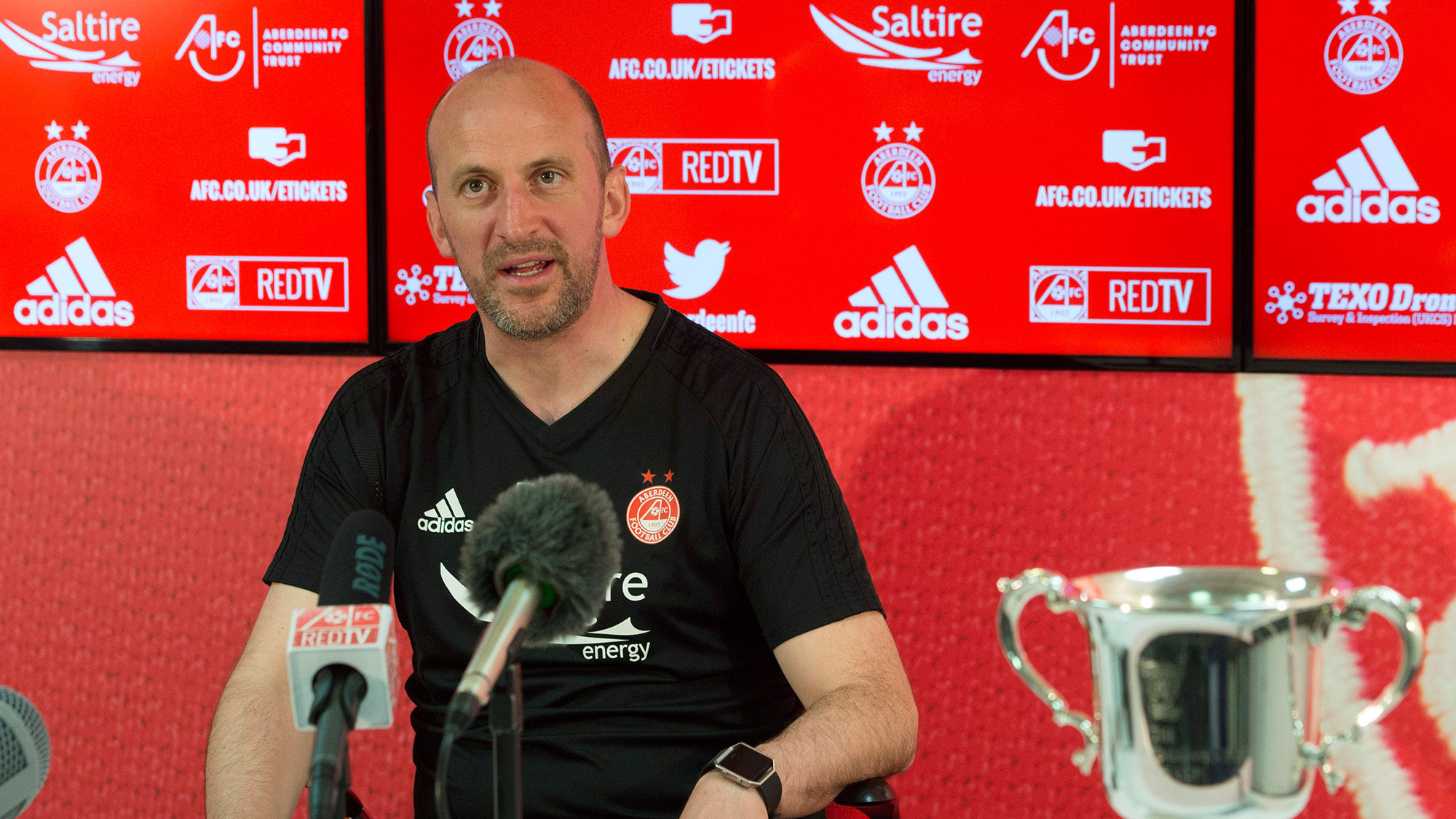 “I’m excited and looking forward to it.

“I think the players are the same. We’ve had a good couple of days leading into it. We will build towards it tomorrow then hopefully be ready to go on Thursday. The club have been great with us. They’ve been looking after us, doing it properly and we’re travelling down tomorrow for an overnight stay so we’re getting spoilt. The boys are enjoying that. We’re doing all we can to prepare properly and hopefully the players can appreciate that and come Thursday they’ll benefit from that.

“It’s just an Under 20’s competition so there’s no overages in it.

“It’s a competition that since I came into the club I’ve wanted to have a run in it and it’s never quite happened for whatever reason during my first three seasons. To get to this stage for me personally is really pleasing, but more importantly for the boys in the dressing room it’s huge for them because they know the importance of it. They know it’s their competition as there’s no influence from up above so it’s always an aim for them to get to the latter stages.

“For them to get to the latter stages and also win it would be massive. It’s 2001 since we managed that and 2003 since we’ve even made the final which is arguably too long for a club of our stature. For that group of players to be recognised as finalists is an achievement in its own, but to be recognised as winners would be even better.

“It’s a prestigious competition. I think it always has been, even going back to many years ago when I played. I played for Whitehall Welfare and even then, it was a big competition. You always showed a good interest in it at that age group to see who was winning it. For the players point of view, it’s huge for them.
Becoming First team players

“We will see how the players cope with the situation. It will be scrutinised from the management above me as they’ll see how certain players handle the occasion, handle the national stadium, handle a crowd, something they’re not used to, so there will be players that’ll either sink or swim on that stage. The ones that probably swim will be the ones that give themselves more opportunity going forward at the football club.

“I think we’re all wise enough to say that it’s a difficult pathway and not enough probably get through that path. There’s plenty talent in the squad and it’s just marrying both the talent and mentality to be the best they can be and I think from a young age the hardest thing is trying to realise the importance of not just your training, but discipline yourself away from the club with your diet and professionalism. It’s not just your talent, it’s the other stuff that comes with it that they need to be good at. Without repeating myself the best ones will get through that. They’ll discipline themselves and be professional in everything they do around the club and away from the club so they’re the ones that tend to give themselves the best opportunity ala Scott McKenna.

“I think Scott should be a huge influence on them. From the moment I came in the club I recognised Scott had that bit extra that I speak about. He was brilliant around the place with simple things like doing his jobs. He was constantly doing the right thing like looking after himself away from the club, at the club and in the gym. Everything Scott needed to be he was, and it was always just a case of time for him and we have to recognise there is a time where you have to be patient. Some of them probably think they’re ready now when they probably aren’t, but Scott was beyond our development squad before he actually made it regularly in the first team. He’s doing that now and touch wood he continues to do that well. Not just in terms of my squad, but for the whole AFC Youth Academy he’s a prime example for most young professionals.” 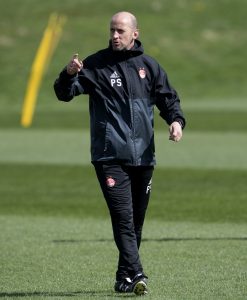 “They’ve got talent and first team experience throughout their squad with Porteous at the back and Shaw upfront so they’re a decent side. They’re hardworking. I watched them in the semi-final and they showed great desire to get to the final and were well worthy on the night albeit it took penalties to get there against Celtic. We know exactly what we face. It won’t be easy, and I think in fairness the whole Development League when it’s predominately 20’s most teams are pretty even. It is a case of going to enjoy and handle the occasion and the team that probably handles the occasion the best will come out winners.”

“I think ultimately the best ones will get through. Again, it’s just that mentality and showing the patience that McKenna has shown, that Scott Wright’s showing just now and his time will come.

“Again, it may be longer than they think so we’re looking at Scott McKenna at 21 now and he is beyond that development stage. It is about recognising it will probably take longer than some of them think and that impatience sometimes holds them back because they then become a bit disillusioned by it and struggle to mentally focus on the end game which is getting into the first team.

“It’s our biggest job really getting players through into the first team. It’s not unfortunately on talent alone and is everything that comes with being a professional footballer and that seems to be the difficult thing for a lot of them and that’s mentally staying focussed and giving themselves the opportunity to stay around the club beyond 19,20 or 21 when the opportunities will come. Maybe getting more numbers out on loan to gain first team experience as it’s certainly done Danny Harvie no harm. Bruce Anderson did in the early part of the season, Frank Ross in the latter stages of the season at Morton, Harlain Mbayo at Albion Rovers and you can see once they have that wee spell out on loan they come back different people. They’re in amongst men dealing with win bonuses week in week out which helps these people pay their mortgage so that realisation that it’s not always coming here with your soap bag and training session, enjoying yourself and away you go again. Some of these boys at part time clubs are on twelve-hour shifts, rolling into their car to get to training and then getting home at midnight. It’s beneficial to get some of them out on loan and maybe we just need to get our numbers a wee bit higher on that to allow them that education in amongst men.” 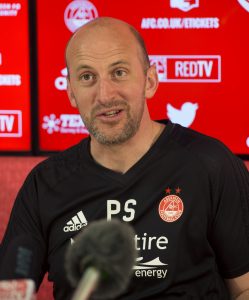 “We’re fortunate enough at the minute that we’ve had to choose from everyone. Dean Campbell has just recently come back into it and managed the game against Hibs last week when we played them in the league. Dean was the biggest concern probably two weeks ago, so we’ve managed to get a full squad together for the game.”

“I hope the backing is a good thing. I think it great for the club’s point of view and the boys point of view for people to show an interest in our game in terms of the travelling. A lot of them will probably go to work then jump on the bus to go to an U20’s game. For us it’s brilliant to have that support at our level and it’s something they’re probably not used to. From my point of view, it will be so appreciated and hopefully the players will recognise the effort a lot of people are making on a Thursday night. Again, hopefully they can put on a performance that pleases the fans that come down.”

“It’s a massive thing (Kingsford approval). I don’t think people out with it really recognise the importance of a training ground and that maybe sounds a bit snobby, but at the minute my working week is the first team are in one area and I’m in another. My boys are desperate to stay on the training ground, but I’ve got to hitch them to the first team to pick up their gear so logistically it’s tough. In terms of the academy, more often that note they’re training on a third at the sports village in the winter and how you can develop players in that environment? It’s tough. The coaches do brilliantly at that level so the scope to open up the pitch for the younger boys will then benefit us latterly as they come in full time. It’s a massive thing for us, the training ground especially.”