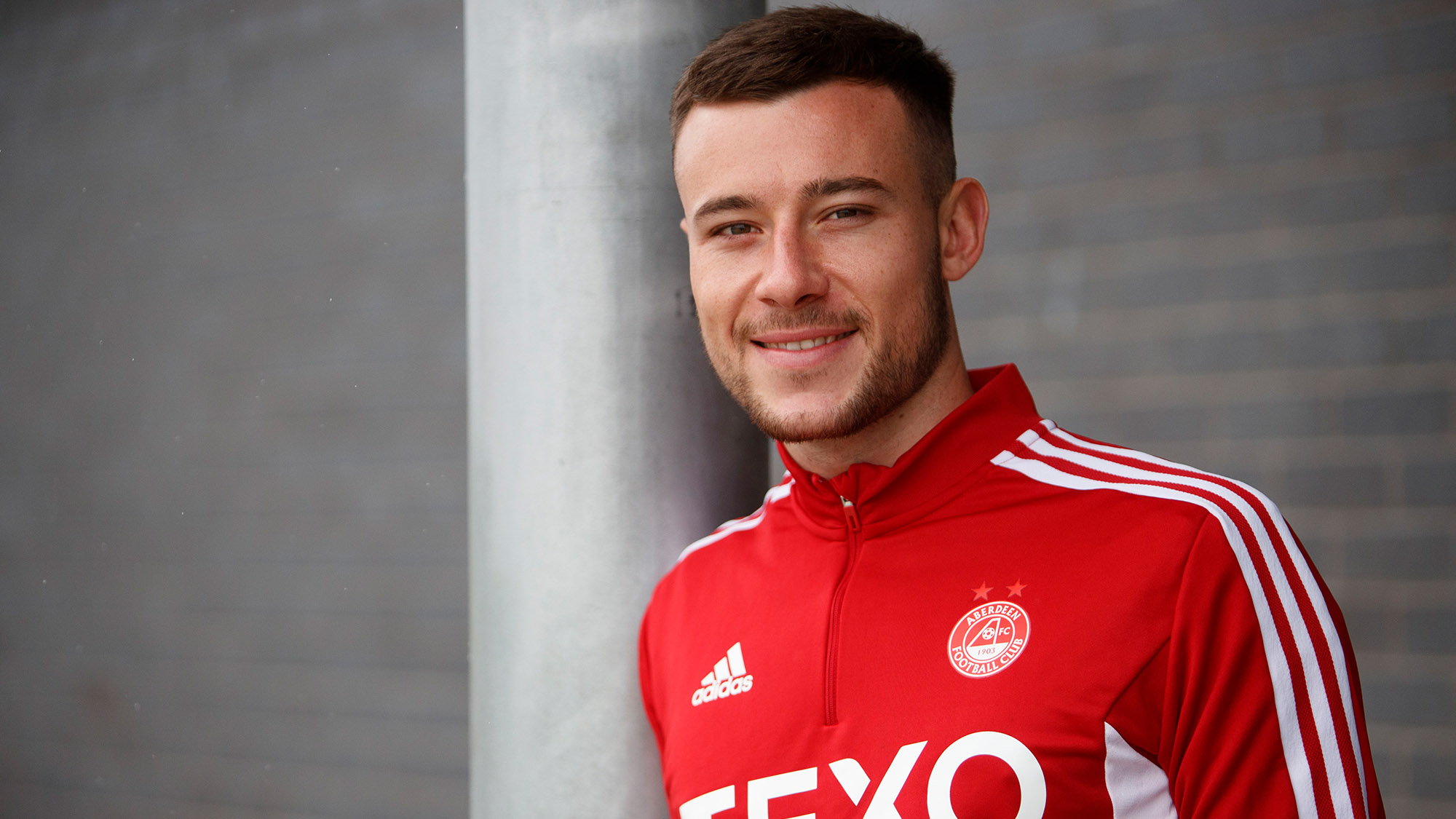 Manager Jim Goodwin further strengthened the Aberdeen squad on Monday with the capture of attacking midfield Callum Roberts. Speaking to RedTV today, the English youth internationalist explained that he can’t wait to get started and to be reunited with an old friend!

“It is an amazing move for me and it has come around so quickly. I had the first conversation about coming to Aberdeen about four or five days ago and now I’m here.

“It was helpful having Jayden here as he knows me very well. I am sure the gaffer would have spoken to Jayden about me, just to get his opinion. I obviously spoke to Jayden as well. He said it was a great club, a really good bunch of boys and that the management team are good as well. It is all very exciting for me to come here.

“Having Jayden here is a help. It is always nice to have someone there to help you settle in and show you around the place, but he said all the lads are great, so I am looking forward to getting started and meeting them all.

“On the pitch, it will be a help having played with Jayden. We both played on the right side of the pitch, so I know how to play with him and he knows how to play with me. He is an unbelievable player, but I don’t want to big him up too much! I know that when I get the ball, if I put it in behind the opposition, he will get there because he is that quick.

“As for myself, I like getting on the ball. I am never one for shying away from wanting possession, wanting to run at players to try and create one v one situations. I will hopefully contribute some goals to the team. That is one of my main strengths.”

Callum’s football story in an interesting one. The 25-year-old midfielder joined his hometown club, Newcastle United, at a very young age and made it all the way through to their first team. Rafael Benitez handed the midfielder a full debut in an FA Cup tie against Blackburn in January 2019, and he repaid the faith shown in him by scoring a goal.

“Coming through at Newcastle was great. I was there from eight years of age. It is every Geordie boy’s dream to play for them. Getting the chance to come through the academy and progressing through the ranks was great. Eventually getting the chance to be involved with the first team and playing a couple of games for them, it was a boyhood dream come true. Then to score on my full debut, when I had friends and family there, that was a very special day.”

Around that time, Callum featured in the England U20 squad with the likes of Dean Henderson, Kyle Walker-Peters, Reece Oxford, Ainsley Maitland-Niles, Patrick Roberts, Dominic Solanke, Axel Tuanzebe, Ademola Lookman and Dominic Calvert-Lewin. “It was a great experience and there were a few good players who have come through from that age group.”

Callum has experience of football in Scotland, having enjoyed a loan move to Kilmarnock with Newcastle United team-mate and former Don Freddie Woodman, and Sean Longstaff, brother of Matty, who was at Pittodrie last season.

“It was my first professional loan, the first time I had really moved away from home, and the first time I had to get to know people in a new dressing room. It was a positive experience, coming out of my comfort zone. I took a lot from that loan move. Since then, I’ve kept an eye on Scottish football and I watched a few of the Aberdeen games last season.”
At one stage Callum looked destined for the very top in England, but has suffered some setbacks along the way, notably, like so many English youngsters, finding himself released by a Premiership club after showing so many signs of promise. From there, he has shown tremendous character and mentality to rebuild his career.

“It was tough because I felt that I had come off the back of the best season of my career – playing for the Newcastle U23 team and breaking into the first team, getting my first start, getting my first goal. Then a few months later everything crashed down around me when I was told I was not getting offered a new deal. They were tough times.

“You see a lot of players who get released by academies, they kind of fall out of love with the game. I would be lying if I said that didn’t happen to me. I stopped enjoying playing football at the end for a while. When I went to Blyth Spartans, it took me a while to get back into football. It was all about trying to enjoy it again, and thankfully that is what happened.

“When I was on loan to Kilmarnock, it was Lee Clark who took me there, he then moved to Bury shortly afterwards. Lee had become the manager at Blyth, and when he saw that I did not have a club, he was constantly on the phone to me! It was just a case of going there and seeing how it went – and it went very well. I am thankful to Lee for helping me rebuild my career.”
On the back of his success at Blyth, Callum earned a move to Notts County. During a season and a half at Meadow Lane, he netted 21 goals and helped the National League side into the play-offs in two successive seasons.

“I scored 16 goals last season, without doubt my best season, so I am coming here with a lot of confidence. The season before, I joined in the January and scored quite a few goals that helped us get to the play-off final at Wembley. It was strange as it was during the COVID lockdown, so the stadium was empty, but it was still an unbelievable experience to play at Wembley and to score there as well.” 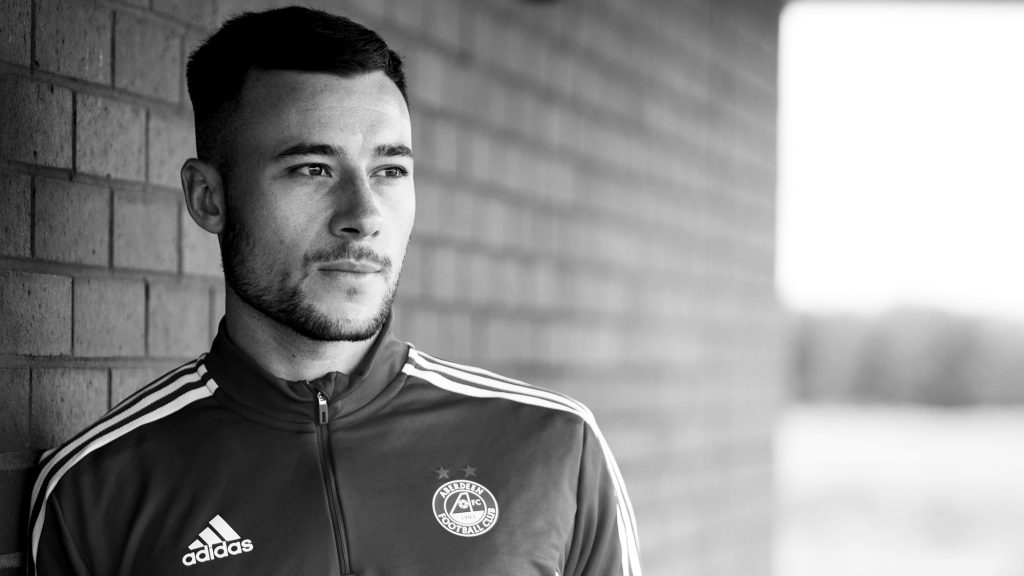 His goalscoring exploits last season attracted quite a bit of interest from other clubs in England and Callum wasn’t short f options before choosing the Dons.

“There were some offers from clubs in League Two and some interest from elsewhere. But as soon as I heard of the interested from Aberdeen, I knew this was the one that I wanted. I did not want to look at anything else, I wanted to come here. I’m so happy everything has been sorted out so quickly.”

Having come through at Newcastle United, Callum fully understands the pressures that come with playing for a big club in a one-club city.

“Success is the only thing this club wants and hopefully I can help contribute towards that. I don’t really set myself aims for the season; I just like to take each game as it comes. I am a winger, I want to create chances, I want to score goals, but at the end of the day it is not all about that. If the team gets the three points on the Saturday or a Sunday, that is all that matters. Hopefully though I can contribute with goals and assists.

“I have a deal now that allows me to focus on my football and not worry about my future. The gaffer said to me to play football freely and to express myself on the pitch. Hopefully I can do that. Fitness wise, I am ready. I have done a lot of running and we played a few games already at Notts. I feel good to go on Sunday”
And thankfully, he has nothing in the diary! Callum’s last visit to Celtic Park, during his loan spell at Killie, saw him having to miss a big family occasion – his dad’s wedding!

“My dad was gutted! He wanted to change the date but was not allowed. So yes, I did miss my dad’s wedding for that game, but I could not miss a game. And I know my dad wanted me to play. It will be nice for him to come up on Sunday and hopefully see me play there at last.” 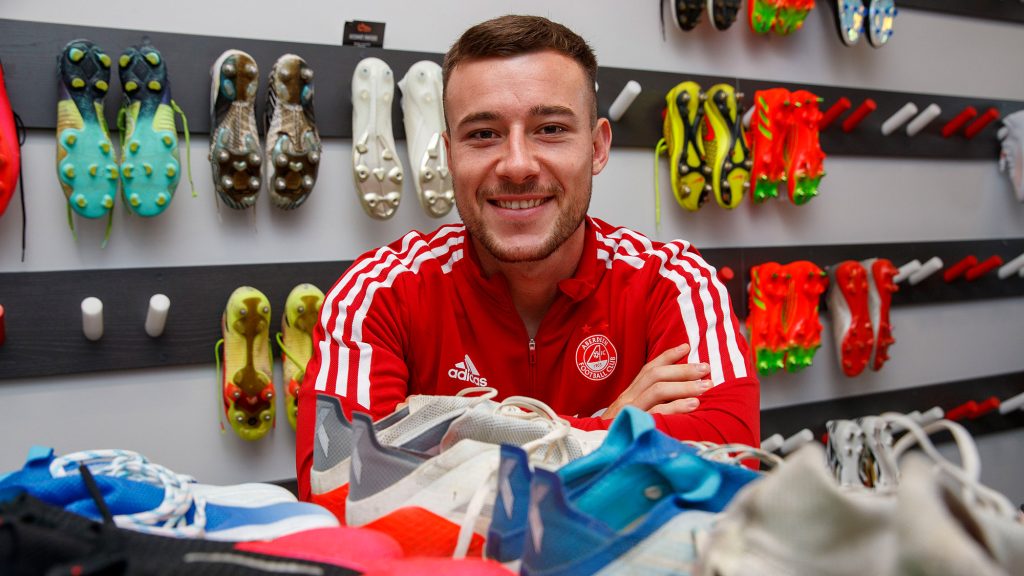