The Dons number one spoke with the media ahead of the Scottish Cup tie with Queen Of The South. 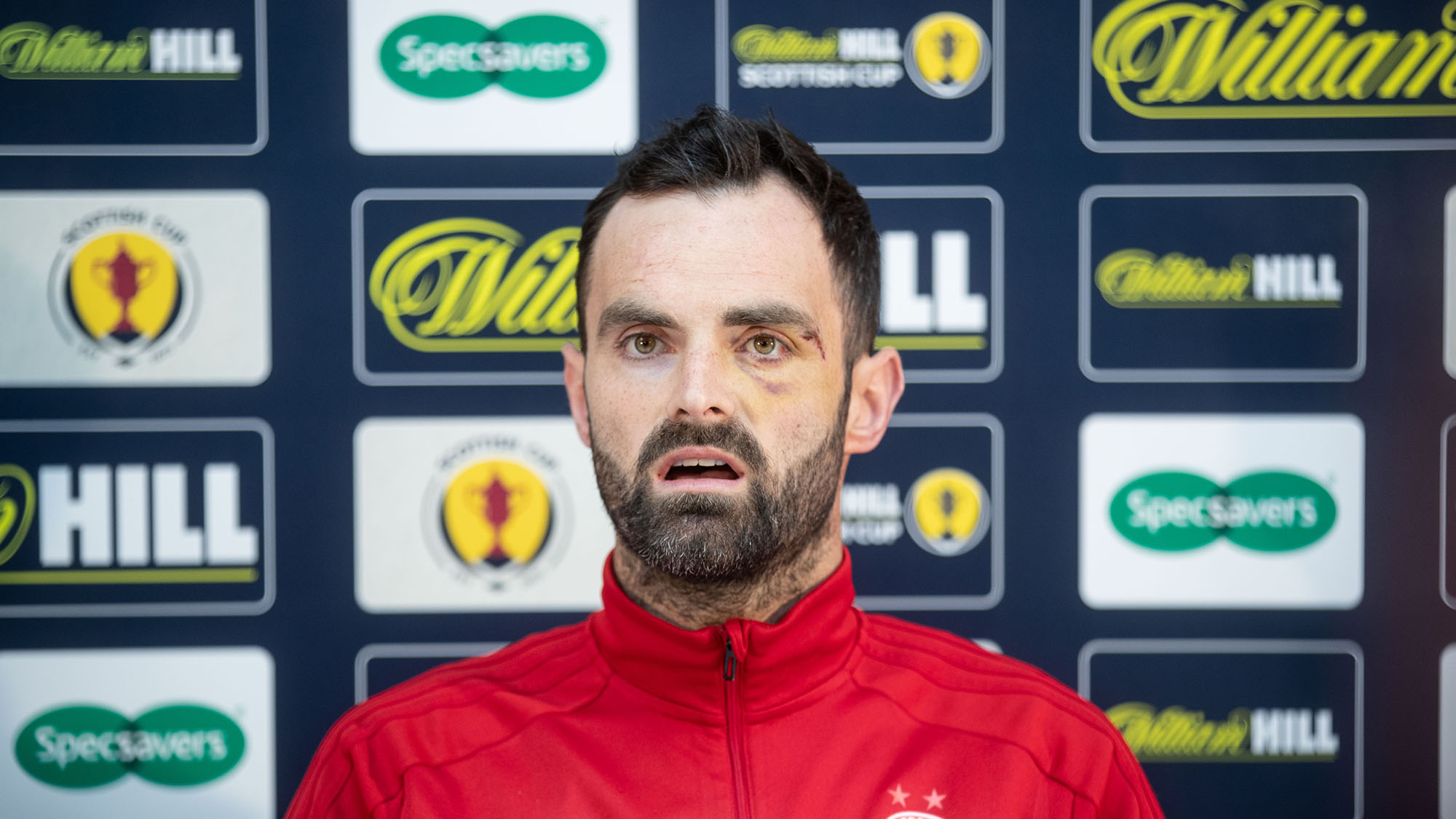 “Disappointed with the result on Wednesday but need to put that to one side now. It’s important to carry on the momentum from a lot of positive performances and now the focus is on an important game on Sunday for progression in the cup.

“I don’t think you can underestimate them, they’ve got a stand out player in Dobbie who’s been scoring a lot of goals this season. We’ll have a closer look at them tomorrow (Saturday) seeing what their strengths and weaknesses are and where we can take advantage of their weaknesses and hopefully nullify their strengths. They’ll come up here and I’m sure enjoy the occasion and we need to first of all match their desire to win the game and hopefully the players in our team with the quality to win games and score goals can make the difference.

“But first and foremost, we need to match their desire.

“I don’t think our approach was particularly wrong against Stenhousemuir. We scored early on and the assumption is that we would then go on to win the match fairly comfortably, we had some great chances and their keeper made some great saves, we hit the post and the crossbar and didn’t put the game away. I think that in any game where there’s one goal in it, regardless of the differences in league positions, as long as there’s one goal in it the trailing team will think they’re in it. We need to make sure we’re clinical in both boxes, same in any game.

“Home ties are obviously, in general, easier than playing away. Less travel as well. In the league cup though we didn’t have an easy run and we got to that final. Each game has it’s challenges, Sunday will be a challenge for us, so we treat each game the same in terms of preparation and we’ll have a good look at them and treat the match with the importance and respect it deserves.

“Obviously you don’t want to lose games, even more so against teams that are at the top end of the table with us. It was a tough one to take given what everyone put into the game and the emotions of the game as well. It was a frustrating game to lose, probably more so than others. There were some very good performances though and in my personal opinion in general play we probably had the better of it. But you have to score the goals and keep them out at your own end as well which we didn’t manage to do. We just have to ensure that we take the positivity and momentum from the performance and keep it going.

“Its not for me to comment on challenges like that. Anything that goes on in the game you have to leave to the authorities to deal with and I’ll let them make their decision.

“I feel like it was fine margins in the game yeah, but I don’t think we can be pleased about losing the game. My expectations for our team, regardless of what’s been spent or perceived sizes of clubs, my expectation going into games against Rangers is that we’ll beat them and we have to have the expectation that we’ll do that. We’ve got confidence going into every game. Yes we can take pride in some aspects of the performance but I don’t get to enthused by just the performance – it’s winning games that counts and that’s what we need to do on Sunday.

“It doesn’t make much difference from my point of view. My focus isn’t on challenges and the decisions, my focus is on Sunday now. At the time it’s emotional and there’s a great atmosphere but the final whistle goes you have to move on quickly. You don’t want to waste too much energy worrying about things that aren’t in your control so we have to move on and concentrate on a very impotant game on Sunday.

“It’s a massive aim at the start of every season, doing as well as we can in the cups. As an Aberdeen player you feel that silverware is always a realistic possibility. The game on Sunday is as important as any other in the cup, I think if you start looking too far ahead it can be your downfall in any competition. Our focus is fully on Sunday and if we get further into the competition and into the business end of things then you can start talking about silverware. Right now though we have to give Queen of the South the respect they deserve and focus on that.

“It’s not a shock to us, he’s been scoring goals all season (Dobbie) and I’m sure every team they come up against has a look at him, but he’s not the only player in their team that can hurt us and he doesn’t do it all himself I’m sure. We’ll have a good look at them tomorrow as we do every game, we have a good look at the opposition in the build up. I’m sure he’ll be one of many that we’ll take a look at.”