Dons Trio Looking To Break Through 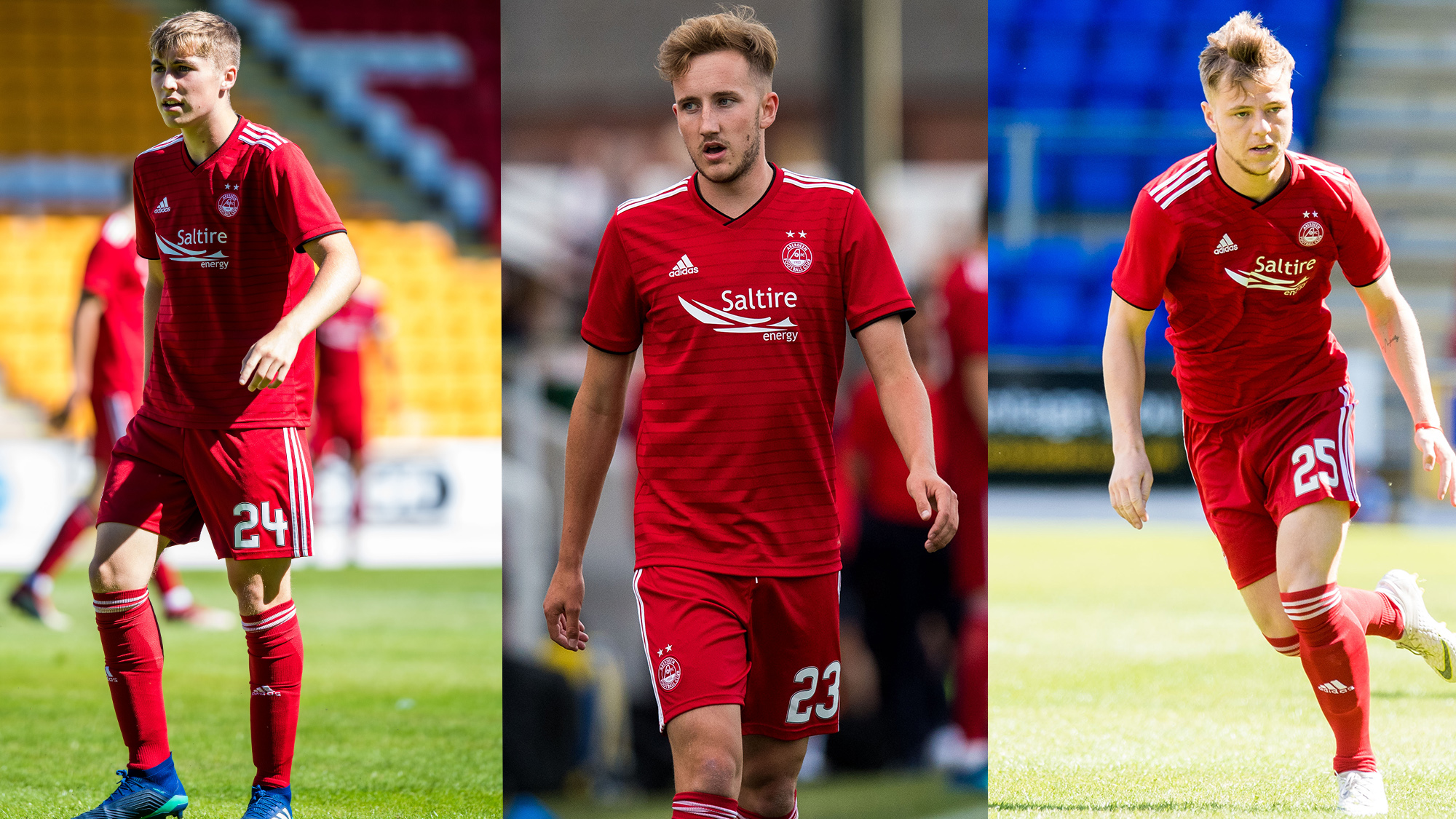 The AFC Media Team caught up with Dean Campbell, Frank Ross and Bruce Anderson ahead of the new campaign. All three were over in Ireland for the first-team training camp and will be looking to develop further with the new season only weeks away. Last season saw Frank and Bruce going out on loan to senior clubs and Dean captaining the U20’s at the age of 17 so the AFC Academy graduates are looking forward to the opportunities that may lie ahead.

Frank – “I’m excited. I think we’ve all done well in pre-season and hopefully we all get the opportunities this season and I think we’re all ready to take them.

Dean – “I’m really looking forward to getting into it. It feels like pre-season has been going on a long time now, but it’s good the season is just around the corner with the Burnley game. We’ve performed well in training and it’s just a case of getting as much minutes as possible under our belts.”

Bruce – “I think we’ve all enjoyed it. The main thing is that it was tough especially that week in Ireland. We’ve all learned a lot and by going away with the first team you learn so much, more so the day before the games as you pick up little bits of advice etc. It’s been enjoyable and I think we’ve done well.” 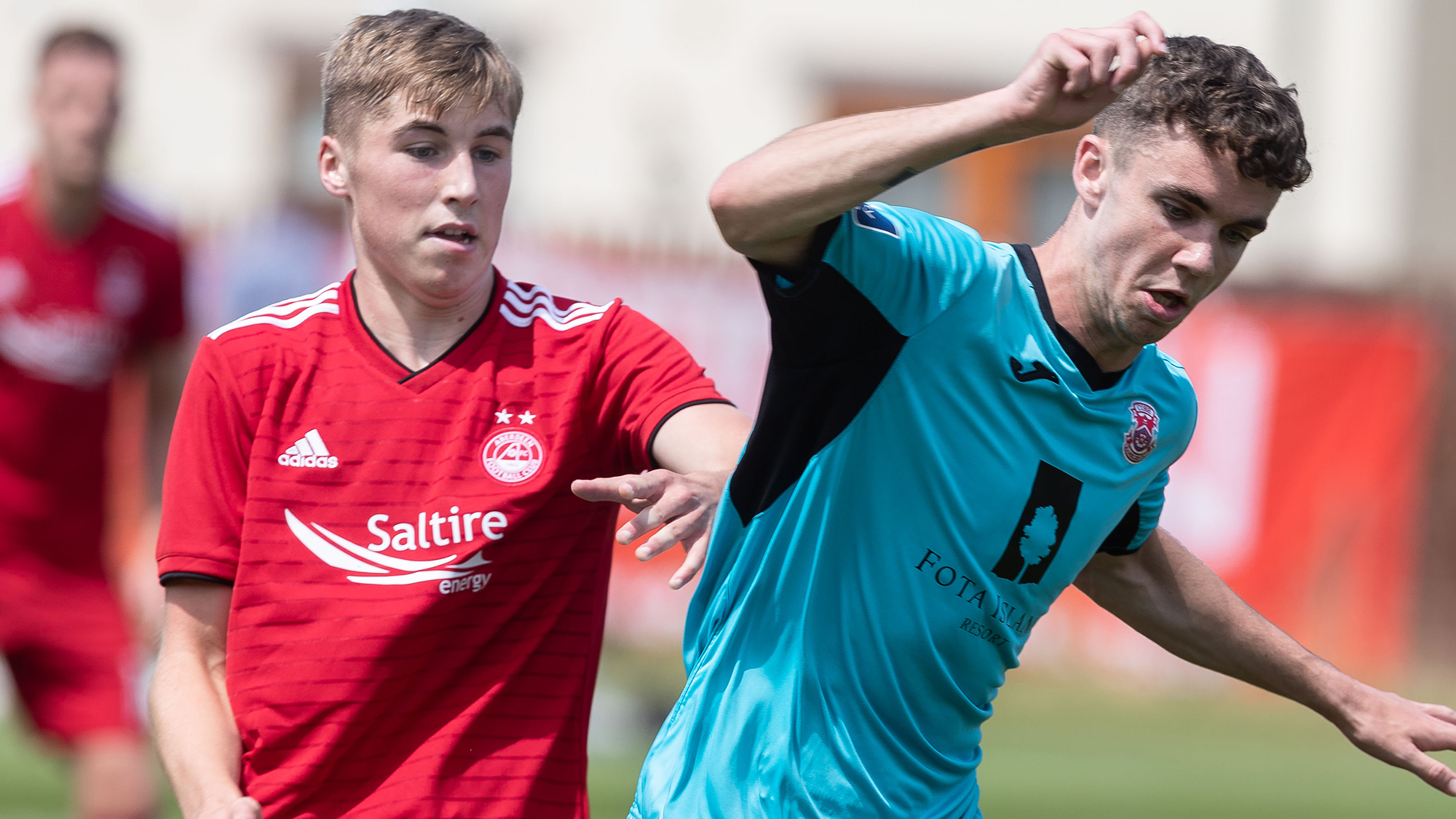 All three have been in the AFC ranks from an early age with the Youth Academy and are able to reflect on the opportunities they have had as they make the transition from youth players to professionals in the last few years.

Dean – “The Aberdeen Youth Academy have a really good link with the first team and under 20’s. There’s a lot of boys from the Youth Academy being given the opportunity to step up and train with the 20’s, get game time with the 20’s and then the link is there for the first team. It’s good that we have a lot of new boys coming through the Youth Academy and it gives them good media coverage because they’ve helped bring a lot of players through. We’re fortunate enough to be at a good club where they give us opportunities to step up.”

Frank added “From the age of nine years old learning from Neil and other coaches and you are able to learn a lot.”

It was another year of learning for the three boys for different reasons as Bruce and Frank were loaned out to Elgin City and Greenock Morton respectfully and Dean captaining the Development side to the Youth Cup Final as well as playing a key part for the Scotland U17’s, with a notable double against Spain.

Bruce – “The main thing I learned from my loan (to Elgin City) was the step up in physicality. I learnt so much from playing men’s football really and at that level they’re all part time so it’s must win for the bonus’s. I learned a different side of the game and I really enjoyed it, more than I thought I would and learned so much in that six months.”

Frank – “Playing senior football is a lot more physical that 20’s so you learn to put yourself about a bit more. Your movement has to be quicker as well as the little things so I found it beneficial. The Rangers game in December was a highlight for me. You can’t get much bigger teams to score against and I was buzzing that I scored and it’s something that I’ll remember for the rest of my life. It was a good day despite the disappointing result.” 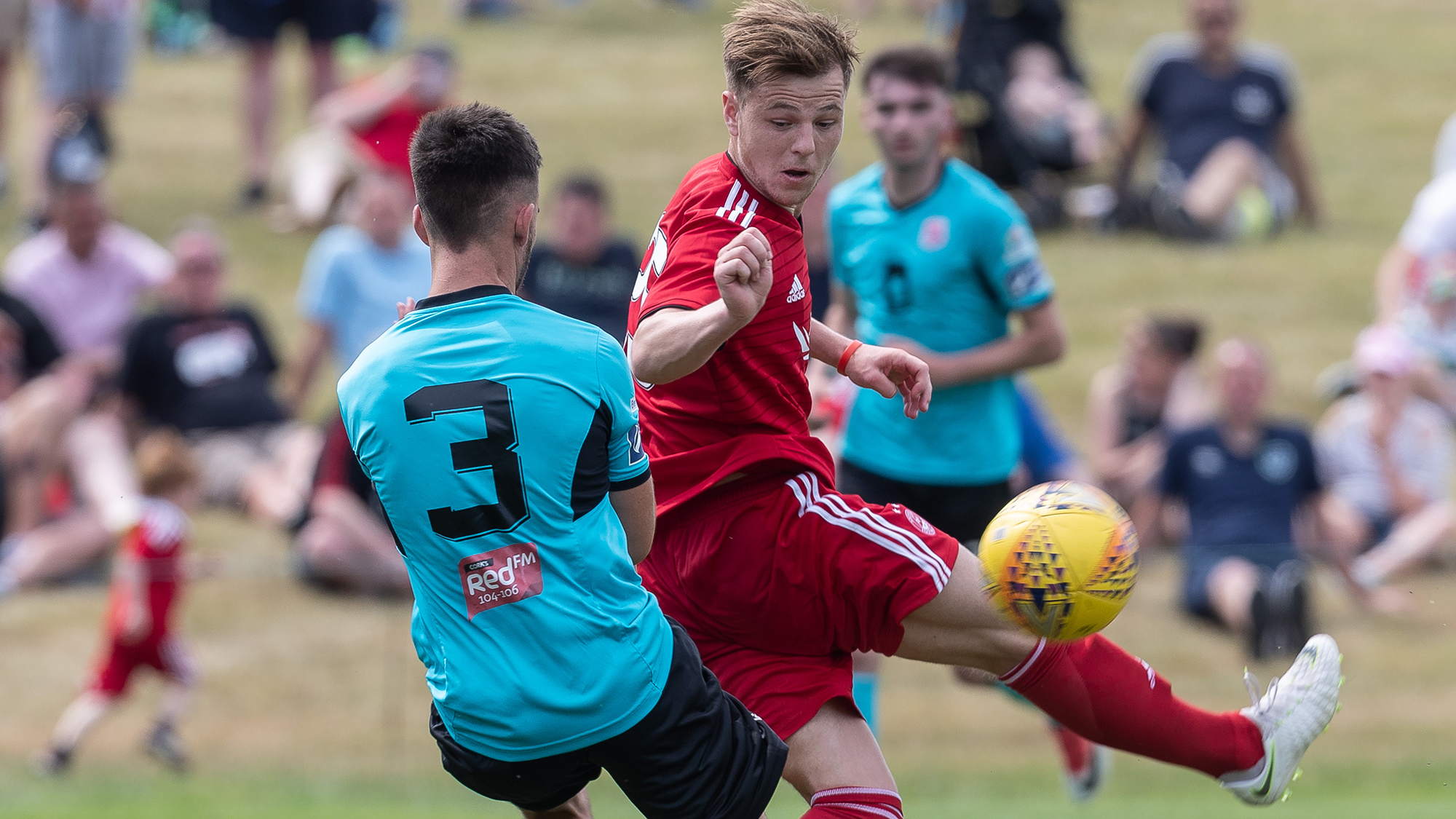 Dean – “It was really hectic last season. The first half of the season I was playing some games with the U17’s, games with the U20’s and for Scotland so I must have hit about 30 games by the Christmas break. When I came back I picked up a nasty injury so that kept me out a few months, but I was really fortunate I could get some first team game time at the end of the season. The Celtic game wasn’t something I was expecting. There were a few suspensions and injuries so I knew I’d be in or around it and I got 25 minutes in the most important game of the season. To be trusted to go on in a game like that with such high stakes was amazing for me and does my confidence even better and makes me want to experience even more this season.

Bruce – “The dressing room was brilliant last season. There was a real togetherness and we said it that throughout the whole season so to get to the final showed how good a group we were. We all wanted to play for each other, we all wanted to win for each other and it was just a shame we couldn’t win it. That would have been the cherry on top, but that’s the way it is.

Dean – “To captain the team out at Hampden was really good. There were mixed emotions on the night as the result didn’t go our way and we wanted to get the win. It wasn’t to be, but no matter what the result was it’s always going to be a night we’ll remember. It’s an amazing experience to be able to play at the national stadium in a cup final and hopefully it’s not the last one we’ll be in.

A good relationship has been built at the club between the senior players and those trying to break through the ranks at Pittodrie and Frank, Dean and Bruce all recognise that the opportunities are there. Last year Scott McKenna was their teammate in the U20’s side at the start of the campaign and ended the season leading Scotland out at the Azteca Stadium in Mexico after a remarkable season in The Dons first team. 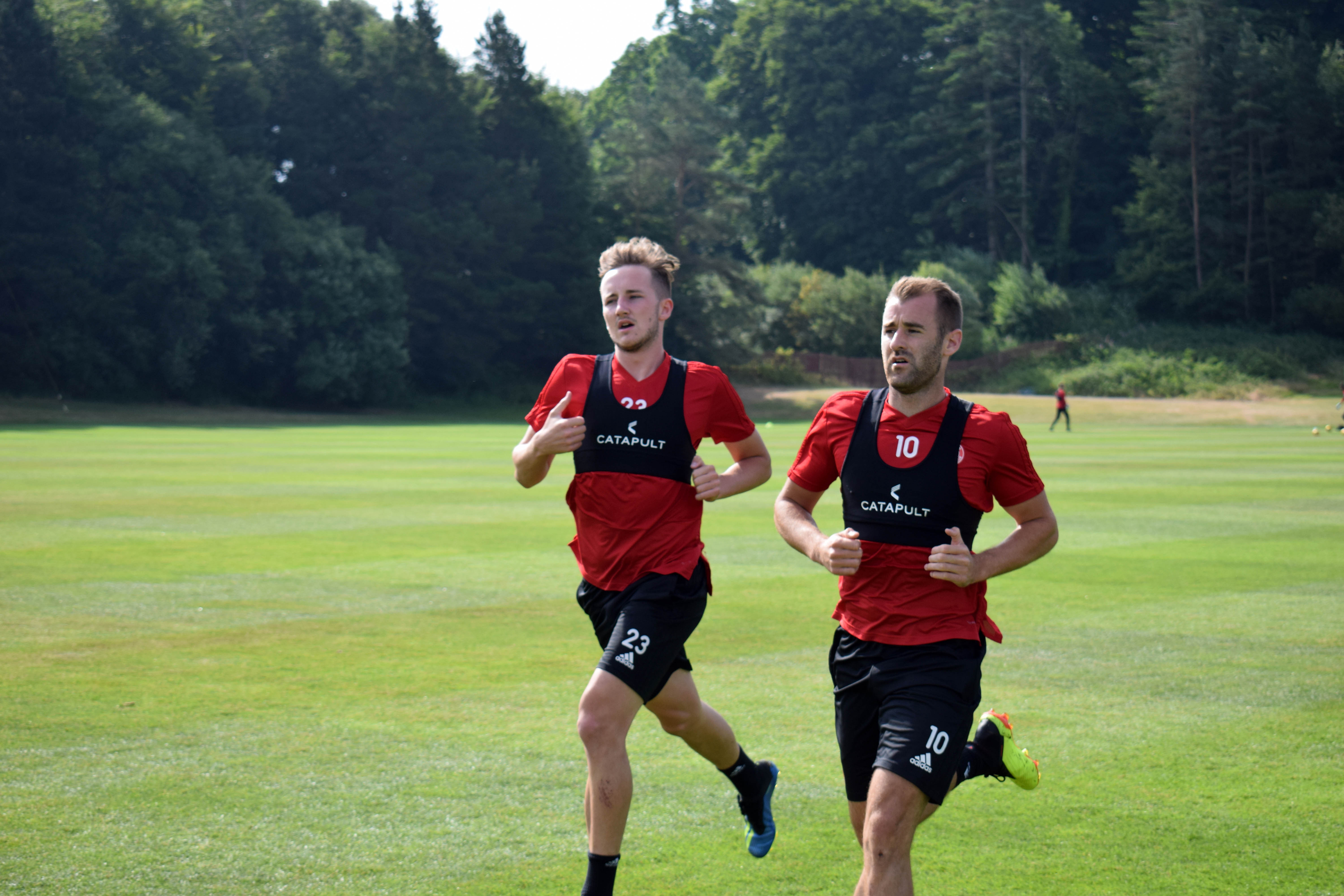 Frank – “We see players like Scott McKenna and others come through knowing they were in our position last year and it just shows how close it is for us. The first team players are all really nice and supportive of all the young lads. It makes a massive difference having that type of person around the club.”

Dean – “It’s hard to believe with Scott because he still comes into our dressing room and bugs us all the time. What a season he had though. He won’t like me saying this though but at the start of the season we got beat 4-1 by Dundee and he shipped four goals for us. For him to go on and captain the national side is incredible and it shows what can be done if you’re trusted to go and play. You just have to take the chance when it comes.”

The coming season will see the reintroduction of the Reserve League to the Scottish game, which will allow clubs the opportunity to play more senior members of their squad. The changes will mean that the mix of youth and experience will be even greater and allows fringe players to go up against experienced players on a more regular basis.

Bruce – “I think it will be good for some of us. We’ll be playing against more experienced players and it’s always better playing against those players. I think the main thing for a young player is to keep learning and keep developing and I’m looking forward to it.”