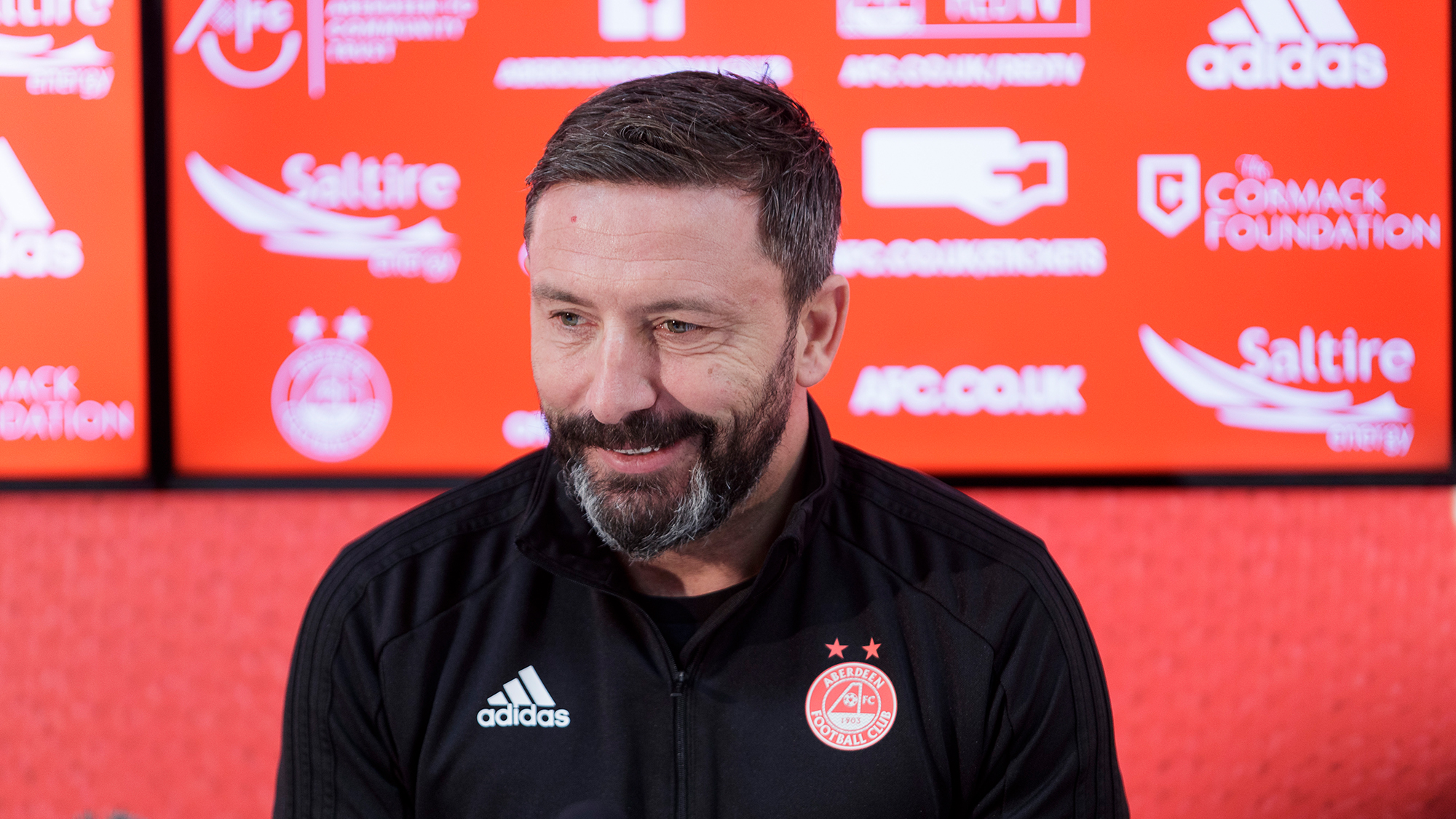 Looking back at Livingston and ahead to St Mirren

“It doesn’t change anything (manner of Livingston win) in terms of the next game as it’s a game we’ll go try and win. As I said the other night it’s good to see the players get their just rewards for their performances as well as their efforts. There was a lot of energy in the team in the way we moved the ball and also the way we worked for the result. Even the first half I couldn’t be too critical of the team at half time other than the sloppiness for the goals. I thought the actual performance was good so what we asked for them was to keep the intensity up, which was clear with the team. When we play with that intensity we are a tough team to play against. I thought we were very good for long spells in the game. When it gets to two each and you’re running out of time you’re just hoping for that one more opportunity as we’d passed up several.

“A last minute winner is so pleasing and you seen the reaction from the crowd and the players with the way they celebrated. It’s no more than they deserved and it was three very important points after last Saturday and it’s three very important points available tomorrow at St Mirren. Although they’ve been struggling to get any real consistency and winning form going for themselves, three points are equally as important to them and we’re well aware of that. We’ve got to make sure we go down there with a similar intensity, similar level of performance and hopefully a similar level of outcome.

“I don’t think we were absolutely brilliant in terms of possession-based game. It wasn’t a game where it was slow and methodical with a lot of passes. We had to fight fire with fire as Livingston are a team who are very competitive, a fit team and very organised so we had to fight for every piece of possession and had to make sure we played in the right areas. They congested the middle of the park and had three centre halves who were narrow. What we had to do is make sure we played in the wider areas and get bodies in the box off crosses and we had umpteen crosses in, which we have been doing in recent games, but not enough bodies.

“Connor McLennan held his width, which is what we were needing and he did it very well. The players fed off the players and the crowd fed off the players because of the way they were playing and I’ve said it many times when we’re all pulling in the right direct we’re a tough club to play against never mind a tough team to play against. Although we were losing the game I think the crowd acknowledged that sloppy goals can happen, but I thought it was a strong 90 minute performance. Thankfully we got our goals and we concentrated in the second half and played the game in their half and that’s the way you want it to be at Pittodrie. You want it to be about making the opposition team defend and the pressure we applied and the speed which we won the ball back was very pleasing.”

“We’ll try and replicate it. There’s always a team trying to stop you and each team has a different challenge, but for us we’ve always been trying to stress that the message is we don’t care who we play. Whether it’s a team at the top of the league a team in not so good form we just need to take care of our own performance. We’ve got a few games left in December that we want to try and accumulate as many points as possible. The first one is now St Mirren and that’ll give us our full attention and it’ll be needed. St Mirren are a team (I’m from that area) who’s support are so willing to get behind their team and they’re looking to do some work in January.

“When a team’s been out the top flight for so long they’ll be doing all they can to stay in it and you see the signs at St Mirren at times being really organised. They are tough to play against and have a couple of goalscorers at the top end of the pitch with Jackson and Hammill. We’re not going to get it all our own way, but for us it’s just about taking care of our own performance and show that intensity we spoke about. It’s quite simple really. We’ll just take care of the next game when it comes and try and win the game.”

“I think they’ve got quality and he (Kearney) has tried to put his own stamp on the team. When a manger comes in out with a window then that can sometimes be difficult. There’s still a few teams down there and St Mirren will believe they can get themselves out of trouble. They worked hard enough to get into the league so I’m sure they’ll be working every bit as hard to try and stay in the league. Nobody’s getting detached and it’s a very tight league. Each three points are vitally important and it’s becoming more of a challenge for most teams. We know that if we can get some more wins between now and the end of December we’ll be sitting in a place where we feel we should be.”

We have been a very young team and the stats show we’re one of the youngest on average in the Premiership. It’s good in a way because you’re getting these players game time. Max Lowe, although he’s a loan player is only 21, Sam is 22 and probably younger in terms of footballing years, Lewis, Connor, Bruce, Scott Wright and Frank Ross so there’s a lot of youngsters there. Sometimes you can inconsistencies with that. Even Connor’s case he was terrific at Ibrox, not so good on Saturday against St Johnstone, but then comes on and lights the game up. Sometimes you’ve got to be a wee bit more forgivable with some of the younger ones, but you’ve also got to give them that encouragement.

“What I have been encouraged by is I think there’s more of a determination from certain ones like Bruce winning the all important corner that started the play for the winning goal. For these boys it’s important they try and became an integral part of Aberdeen. They’ve not to get too down when they don’t play so well and not to get too giddy when they contribute. Their job is to be a regular and force their way into the team and make my job a lot easier in terms of recruitment.

“If we’ve got the boys here in the building then great, but they need to show that maturity and personally, confidence and drive to stay in the team, rather than just get a few headlines and be happy with their work. The challenge for them isn’t getting into the team, the challenge is staying in the team, but I’m encouraged this group probably more than any other group we’ve had and we might just manage to get a few more through.”

“Gary and Mikey are both out and there’s no real progress at the minute. Frank Ross is still out and Reynolds is back almost in full training which is terrific. Greg Tansey missed the game the other day with a bug, but everybody else is good to go from the other night and we are as we are.”

Sam Cosgrove and Stevie May

“Other than his sending off here against Celtic, which was clearly a rush of blood on his debut, I think Sam has been very smart with his work and I’m not going to let the red card at Ibrox start to get this stigma reputation that he’s someone who’s going to accumulate a lot of yellow cards. He’s not that for me. He’s smarter with his work and his performance the other day was very good in terms of a big old fashioned English centre forward. He gets a hold of it, gets in wide and gets it in the box and contributes. It’s so important that Sam and others from the other night build on that performance and that becomes the new normal for them.

“Sometimes when a player goes onto the park and they say “he needs to score” or “we need to win” only adds to the tension and doesn’t allow to give that real natural performance. I wouldn’t say the word need, but it would be a reward for Stevie (to score) and it’s something he’s clearly searching for. He got himself into some good positions and I’m fine with any striker missing chances. Some of the best strikers going about miss chances, but what’s the worst that can happen? For me it’s no big deal, but what I have to see is strikers in positions to score goals and give themselves the best opportunity to score a goal. I feel we got that from all our attacking players.”

Derek McInnes: “Pleased with the effort of my players”

Derek McInnes: “Pleased with the effort of my players”