Derek McInnes on day 1 in Dubai

The manager spoke to RedTV on day one of The Dons training camp in Dubai. To watch the interview, please click on the red button above. 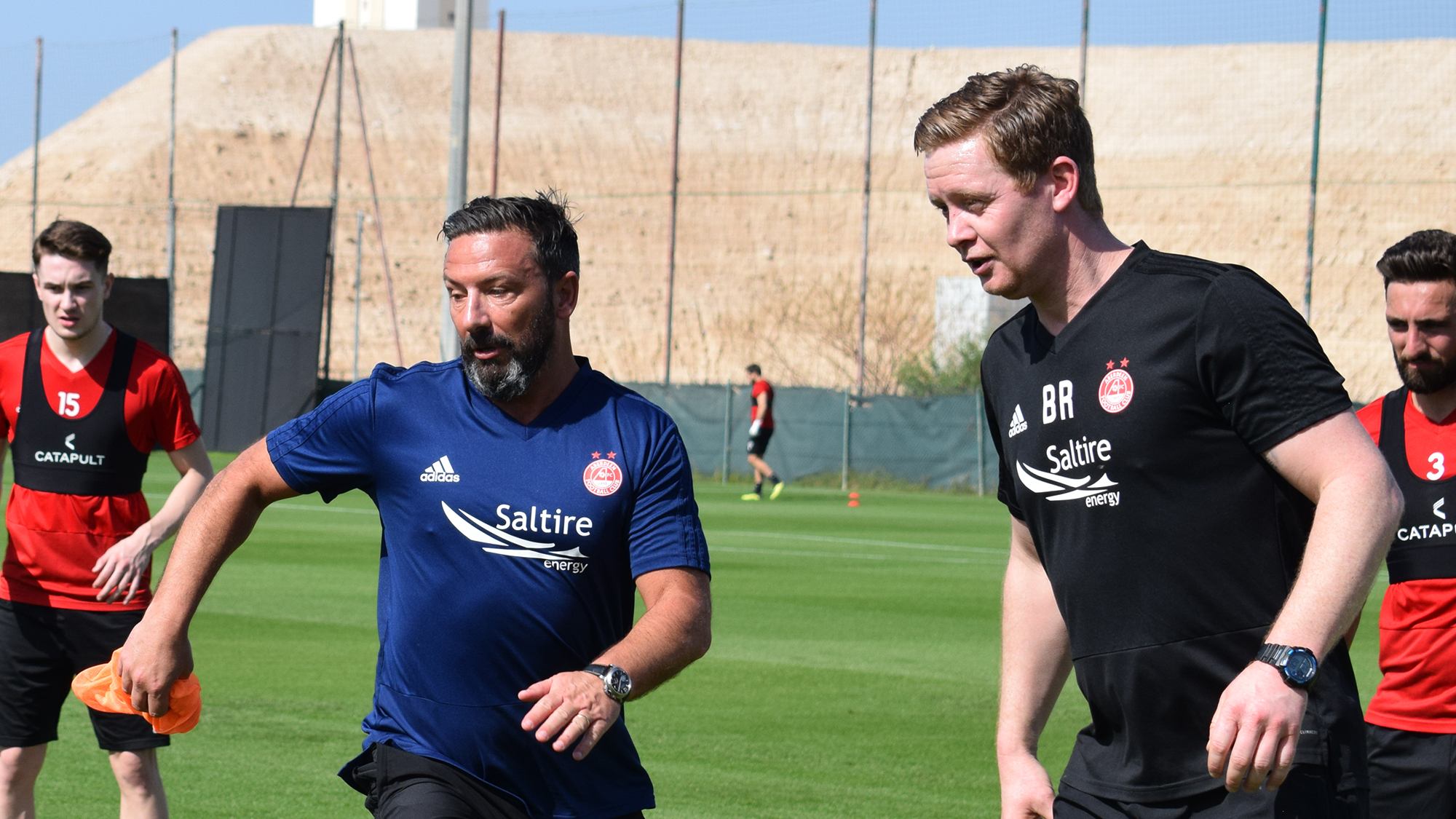 “It’s always good to get that first touch especially after a full day of travelling yesterday. It’s really getting the journey out of their legs and getting the players moving again. You’ve just got to make sure we don’t do too much too early so it was just a wee set up session this morning for this afternoon’s work. We’ll come back out early evening and get some more work into them and that’ll be the first full day ticked off. After the journey it’s just good to get back onto the grass.”

“Tommie Hoban joined in and we probably need to make sure we gauge him carefully as we go along. It might be a bit ambitious to think he can do every session after being out for so long, but it’s great to have him back. I felt Tommie had a big influence on us at the start of the season with his quality in his training and performances and we were very keen to try get him back. He’s had his troubles as we know, but it’s good to have him back.

“We’ve got a couple of boys still with the physio like Shay with his hamstring and he’s responding well. Niall McGinn’s groin is responding well, Stevie May had a little ankle strain from the Livingston game and he will stay with the physios for the next couple of days. Gary Mackay-Steven has got his boots back on and has been doing a bit of work so that’s encouraging. There’s still two or three of those lads short of joining a full session and hopefully by the end of the week we’ll start to get them more involved with the main group.

“I wanted to bring Frank and Bruce out, but we could only bring 23 including the two keepers and we’ve already got five or six senior players not able to do anything. With the potential game here on Sunday we needed to make sure we had enough bodies that were actually able to do work. Frank is still at a very early stage with his rehab in terms of doing a bit of running and wouldn’t have been able to do any ball work. Bruce has got a problem not only with his calf, but with his shoulder against Livingston so we’re going to get him to see a specialist on Thursday and we’ll see the outcome of that. It looks pretty bleak for Bruce and it looks like he’s going to be out a while, but we’ll wait to get that confirmed or not by the specialist on Thursday.”

“Ethan Ross and Miko Virtanen got brought in at the expense of Frank and Bruce because we needed bodies for training and with the game in mind on Sunday. While we hope there’s going to be some boys fit before the game, there’s still a chance they might not be. Ethan and Miko have been training with the first team squad for a while now so it was good to get them out here. We’ve brought younger ones in recent seasons with Dean Campbell, Chris Antoniazzi and Connor McLennan and they’ve always responded well so it’s good to have them out here because that enthusiasm from the younger ones can add to the session.”

“If you ask any manager when the window opens they’re always hopeful of getting some business done. The form of the team has been good through December and we were pleased with our work for the majority of it. I think we’re also aware the big challenges are still ahead of us. There’s 17 league games and a cup that we want to go and win so we’re trying to get the squad in place so we can make those additions. Whether we can or not- it’s difficult to bring players in any window especially the January window- but we’ll do our best.”

“We wish Greg Tansey well. In hindsight when you look back he came really when he was struggling with an injury to start with and it just gradually got worse. He was brave enough and committed enough to try work through that, but it caused him a lot of problems. We and Greg feel he just needs a fresh start and we hope he goes well. He goes with our best wishes.”

Looking Ahead To Stenhousemuir

“It’s important we get a game out here if we can just to get that step towards that game [Stenhousemuir]. We’ve always been very diligent with our work and we’ve had Stenhousemuir watched and will get more familiar with them over the next few days. Being at home in a Scottish Cup tie we have the expectation to win the game and we look forward to the game when it comes round. Hopefully we’ll have a better idea of where the squad is in terms of who’s fit and available. Regardless of what team goes out on the pitch next Saturday that’s got to be our focus now from the work we did today and the work between now and then. It’s just about firing the players up again. They earned their break last week, but now we’ve got to make sure we start from where we left off and be as good as we can be against Stenhousemuir.”