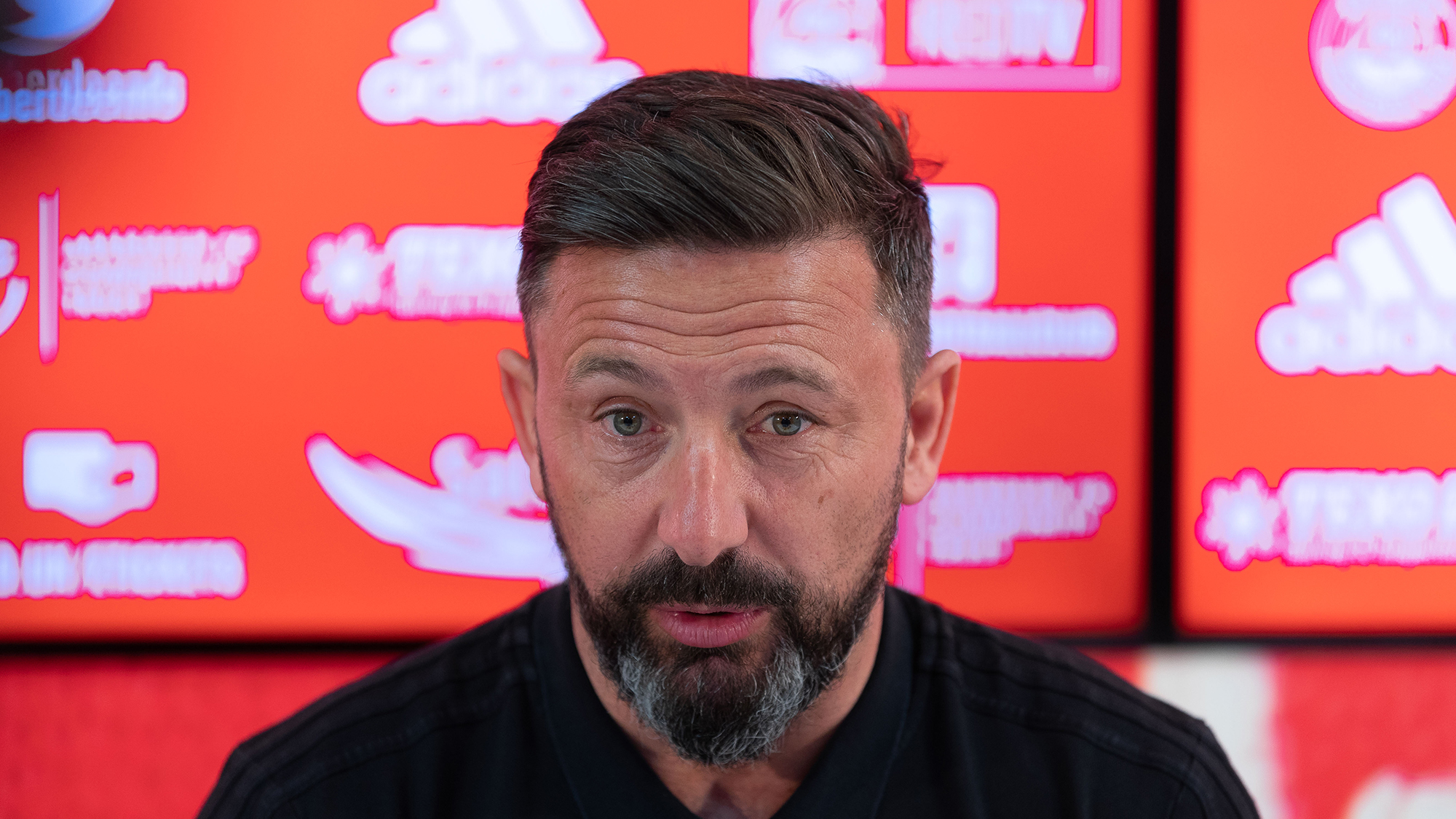 “It’s another huge game. The Hibs supporters have done their bit selling out their allocation, I’m sure the Aberdeen supporters will be doing something similar and I think it will be something close to a full house here. The weather will be good, the pitch is better, two good teams playing head to head so there’s no tension, just excitement and we’re really looking forward to it.

“Regardless of the opposition I think from our point I did say before the split I felt we probably had to win four games if we wanted to finish second and that’s still our objective. Being at home we want to go try win the game and we recognise the level of opposition as they’re a good team there’s no doubting that. I said at the start of the season I thought they’d be up there and everything they’ve done since then has reinforced that. They’ve been really strong, and we’ve got to make sure there’s a challenge there, but we look forward to trying to see that challenge off.

“We’ll look to go win the game. It’s pure and simple. I don’t think it’s a must win game for both teams, but it would certainly help our cause by winning the game.”We’re very strong and we normally score the first goal. It’s been a couple of years we’ve lost the game after scoring the first goal and we always set out to try and impose ourselves on the game and I think that’s what we try to do.

“The game here I think was as good as we’ve been, and I remember Neil’s comments about their second half performance at Easter Road when they beat us 2-0, deservedly so, he said that was as good as they’ve been this season. I think both teams have got good individual players if they get on top they can demonstrate their abilities and make it difficult for any opposition. We’re hoping we can follow up on our couple of victories we’ve had. I think we’ve been strong individually, we’ve had two clean sheets, scoring goals and that gives us the confidence and the feeling that we can go and do something similar. I expect it to be tight to be honest.

“I think there will be a lot riding on the game, but we are very proud that we’ve been the second-best team in the country the last few seasons and we want to be exactly that this season. To do that we’re going to have to beat a couple of good teams and hopefully we can do that on Saturday.

“I think if you look at the potential reasons for some of that (split record) is we’ve been too far away from being first post-split, we’ve normally secured second post-split, we’ve always secured Europe as the split goes into it so like every team you need to play with an edge.  Think up until last season we had decent form because the Scottish Cup final was at the end of it and we were well aware of that, so it maintained that edge to the players performances. There’s maybe reasons why in previous years, but I don’t think that’s relevant now as we have something to play for. We haven’t secured second and haven’t secured European football, but I think our performances the last two games have been indicative of that.

“The players deserve a lot credit. We’re up there again. We’re sitting in second spot at the minute and you hear people make comment that it’s been an underwhelming season for Aberdeen. A lot gets said about the teams round about us, but we don’t seem to be getting that same recognition as a team for my players so hopefully by winning on Saturday if we can then people will maybe recognise the good work being done at Aberdeen.

“Everybody has a part to play and I gave my reasons for starting Sam against Hearts. I think he justified his selection, which is good, and we don’t want to expect too much. He’s got a role to play and it’ll do him no harm. I think you come into a club and want to prove yourself and prove your worth and he certainly took a step forward in the game on Friday night.

“It’s another game. We’ll look at the opposition as we do and whoever selected has got a role to play. They’ll be well-clear of their role within the team and hopefully we can deliver that performance.

“I think we’re better commenting on these things when they happen, but the prospect of a global name like Steven Gerrard coming into the Scottish game can only be seen as a good thing. I’d prefer if he was a player because what a player he was and a fantastic leader of men at Liverpool and England. Obviously, he’s taking his first steps in the coaching side of it and into the management.

“I think in Scottish football at the minute there’s a lot of good and positivity about it and a lot of good managers. There’s high profile managers and managers that have managed at a higher level and certainly Steven if he was to come into it on the back of his playing career would certainly be a box office name and it can only help the Scottish game I’m sure.

“It’s not for me to comment on (Rangers). I’m disappointed that another manager has lost his job and last week with Jim Duffy and Graeme Murty losing their jobs. Graeme was starting out in his first job and Jim’s been around the block, but it’s still equal sadness and disappointment when you see good people lose their jobs. It’s disappointing, but that’s the nature. We all go into it knowing sometimes these things are very harsh and unfair on managers. It’s important to enjoy the good days when you’re a manager as well as well as the tough times.

“We’ll deal with the Rangers game when it comes around, but Hibs are too good a team to be anything else other than 100% focused on them and that’s exactly what we’ll be doing.

“I said four wins before the split was needed and hopefully that will be enough so hopefully we’ve got the first two wins in that part of the job done, but there’s still a lot of work to do.

“I think Hibs have good size at the back and good experience. They’ve obviously got good technical players in the middle of the park and a good level of player there. There’s pace and energy on the sides and upfront and that creative part behind that. They have found a way of playing I recent months which suits their players and they carry that attacking threat, but also have that solidity at the back with three experienced centre backs. When they played against us in the three previous games it was always with a back four, so they’ve changed their team as they’ve went along. The results suggest it’s suited them, but we’re in good form ourselves and we have to remind everybody and ourselves that.

“You look at the form and we’ve won five out of the last six in the league and that’ll help us going into the game. I think Hibs will clearly come here confident and you hear the noises coming out of them, but they’ll be facing a confident, experienced team that are determined to get our job done for our sakes.

“I would never have said it was us and Hibs solely fighting it our or second place, but what I did say is Hibs would be up there and I said it at the start of the season. Neil said it last season when they were in the Championship that they had a Premiership team and Neil felt they were capable of being second best. I think between Hibs and Rangers both have a lot of good players and there’s an equal challenge there.

“It’s in our hands as it is with Rangers and Hibs and that’s why it’s very exciting and adds to it all. Each game that goes past will maybe become clearer, but from our point the clear objective is to go and win the next game and we need to deal with not being dependent on others.

“We’ve three games of football, but obviously we’re playing against our two direct opponents that can stop us finishing second and potentially stop us competing in Europe next year so there’s a lot on the game. It’s so much better this way having meaningful games come the end of the season.

“Ideally, we’d like to be competing for first and being beyond everybody else, so competing for second is the next best thing and we’ve been that second-best team over the last few years and it’s not been easy. It’s been difficult, but the players have shown their worth and the motivation to do exactly that hasn’t changed. We’re still that team that want to finish second and we’re at the business end of the season. Everything behind us is done both good and bad and it’s all about the next game.

“Our points are roughly where we are. We can still break 70 points again for the fourth season in a row and I think only two teams in the last 15 years have managed to break 70 points. I think Motherwell did it one year and Hearts did it too, but for us can potentially do it four years on the trot.

“I think the league is tougher and I think there’s good managers in the league, but there’s also a better strength of team and this will be the toughest season to finish second. They’ve all been tough, but we’ve normally got the job done by now and the intention is to get the job done. A win on Saturday will help us get there.

“The level of performance has been good which means confidence is high and the strength of the squad is there. Unfortunately, we don’t have Kenny McLean available for us, which is a real blow and it’s disappointing when you’re without key players, but that’s something we will have to overcome. Other than Kenny and Chidi, who will hopefully be full training next week, we’ve got a full squad to choose from. Players are bursting to play their part.

Kenny is a very good player who’s having a very good season and his influence on my team is clear, but the reason you have a squad is to hopefully cope with that loss. I think we’ve shown we can cope without one two key players and sometimes beyond that it’s a struggle like most teams, but we’ve won games without a key player before. Mikey Devlin wouldn’t be considered for this one, but he’s working away fine.

“The fans backing is very important and is always important. I think when there’s a noisy and huge travelling support that always adds to the atmosphere and it can sometimes stimulate our own fans. When our fans go away from home in good numbers it generates an atmosphere at every away ground.

“We’re hoping that the supporters will clearly see it the same way as we do that it’s a very important game in our season and they’ll enjoy getting behind the team and enjoy a winning performance.”