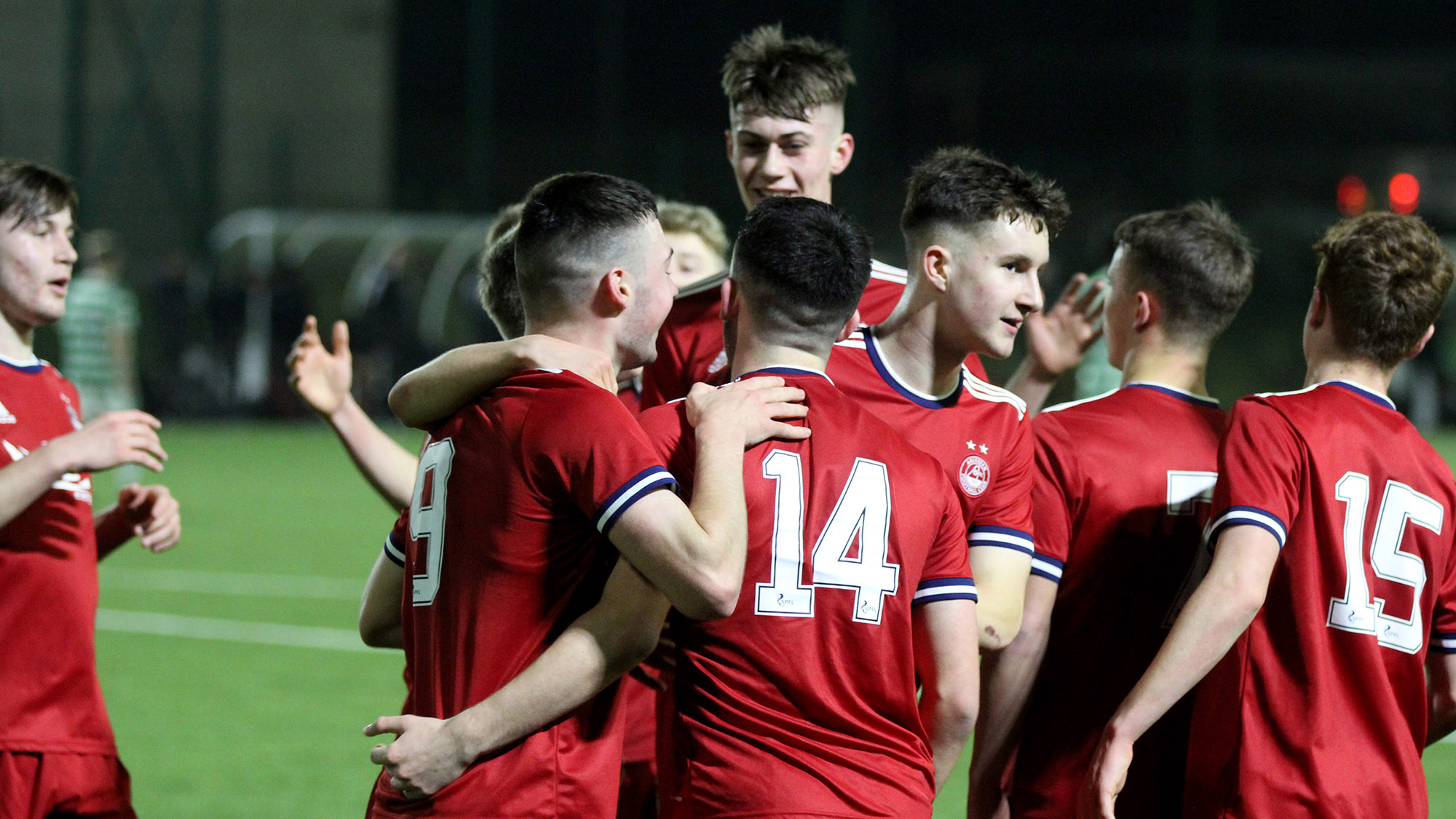 A stoppage time wonder goal from Finlay Murray gave the ten man Dons a deserved share of the spoils after Celtic had fought back from two down to lead 3-2 early on the second half. 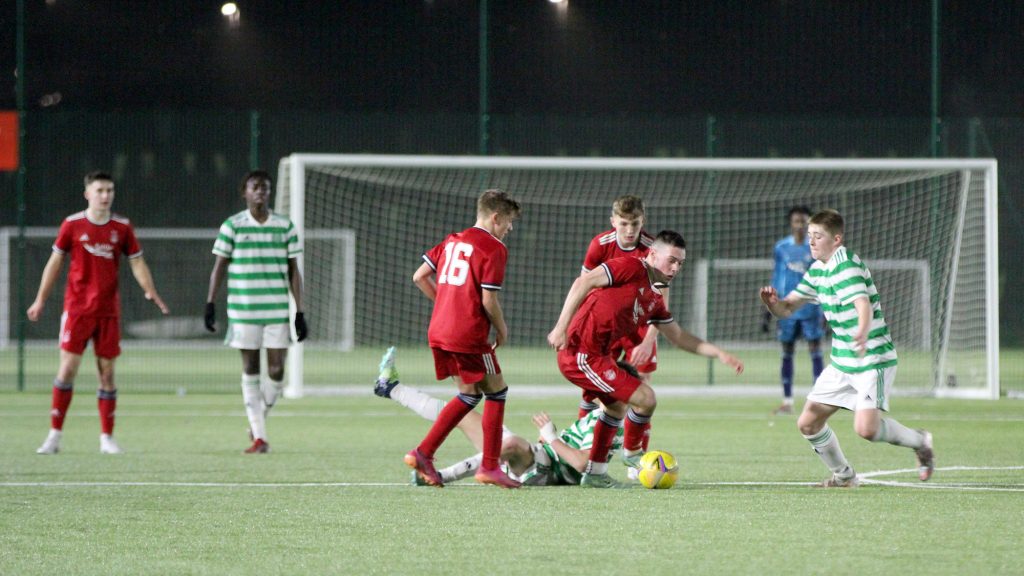 After a near two month hiatus since their last League outing against Hamilton Academical, Barry Robson’s Under 18s welcomed Celtic to Cormack Park for the second time this season as they looked to get back to winning ways after a run of three successive defeats at this level.

The match pairing together the league’s seventh and eighth placed teams, the Glasgow club three points better off than the Dons who have played three games fewer to date. Both teams have fielded young sides this season. 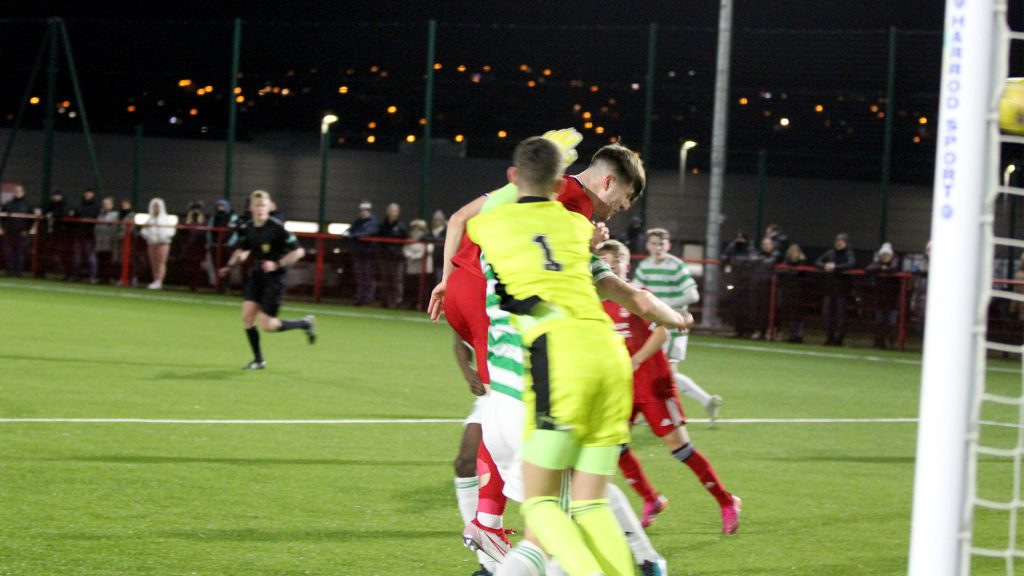 With Timi Fatona suspended after his red card in the Accies game and Ryan Duncan now on loan at Peterhead and Evan Towler at Elgin, changes were necessary.

Aberdeen lined up with Blessing Oluyemi in goal behind a back four of Ethan Duncalf, Finlay Murray, Blair McKenzie and Taylor Mason. Skipper Finn Yeats and Findlay Marshall were in central midfield, flanked by 15 year old Cammy Wilson and Adam Emslie while Liam Harvey and Alfie Bavidge were up top.

Celtic enjoyed the bulk of the early possession without creating anything dangerous, while a Harvey cross was headed wide by Bavidge as the home side came into things.

On eight minutes, the Dons took the lead, a lovely Wilson cross being headed deftly past Morrison by Harvey. 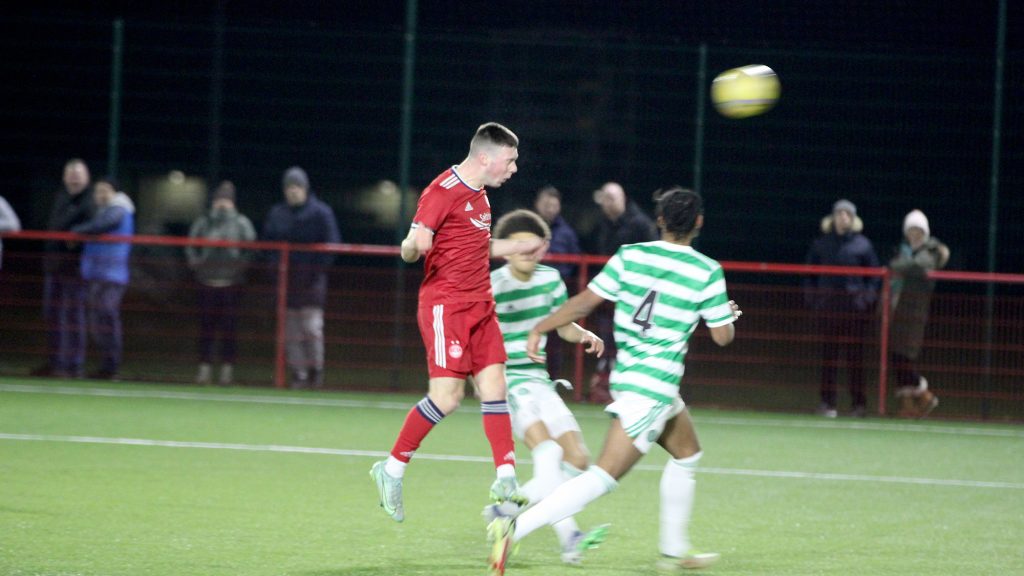 This lifted the Dons and Harvey again came close as the strong running of the front two caused Celtic’s defence umpteen problems.

Really good pressing from Bavidge forced Agbaire into a slack back pass and Harvey nipped in to get to the ball before Morrison, the keeper’s challenge on the striker clearly a foul which saw referee Nicolson point to the spot.

Harvey dusted himself down to expertly slot home the penalty to put Aberdeen two up. The striker then missed a chance to put the young Dons three up, his shot from the edge of the area just going over.

Celtic were rattled by this but started to exert some pressure and they won a penalty on thirty minutes when MacKenzie was tripped in the area after a good run.

Striker Eseosa Sule took the kick and Oluyemi produced a fantastic save but the Celtic man was alert and prodded home the rebound after the ball had spun off the post. Really unfortunate for the Dons keeper who deserved a bit of luck after the initial save.

Two minutes before the break it was all square as Bonnar picked up a loose ball twenty yards and placed a low shot past Oluyemi.

Bavidge saw an effort on goal blocked by the feet of Morrison before Bonnar forced a fine save from Oluyemi as the sides went into the interval tied at two apiece. 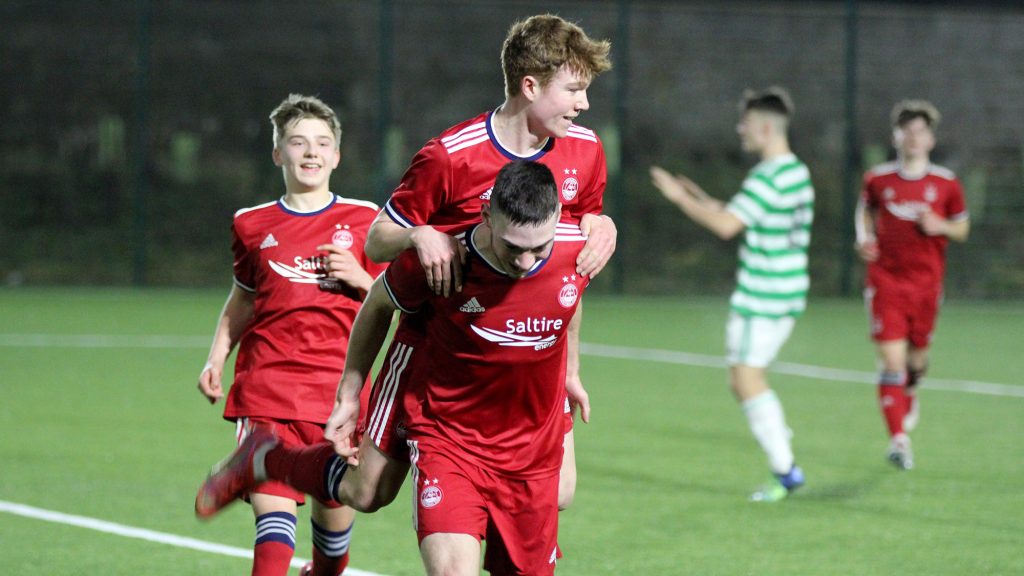 Some slack play from the Dons saw them gift possession to Celtic on the edge of their own box on 48 minutes and Goldie took full advantage to fire the ball home to turn the game on its head.

Harvey was denied his hat-trick by some fine Celtic defending after a great Bavidge run and cross then Marshall headed a clever cross from Wilson over the top as the home side tried to get back on level terms.

On 62 minutes, Aberdeen’s chances looked to have take a real dent as Bavidge was shown a straight red card after a challenge in the middle of the park. It looked a bit harsh but the referee was in no doubt.

Despite being a man light, the Dons still pushed forward at every opportunity as Marshall, Wilson and Harvey all had decent efforts on goal.

Celtic, as they had done in the first half, enjoyed large chunks of possession but there was no real threat from them going forward and they were made to pay as the game went into stoppage time. 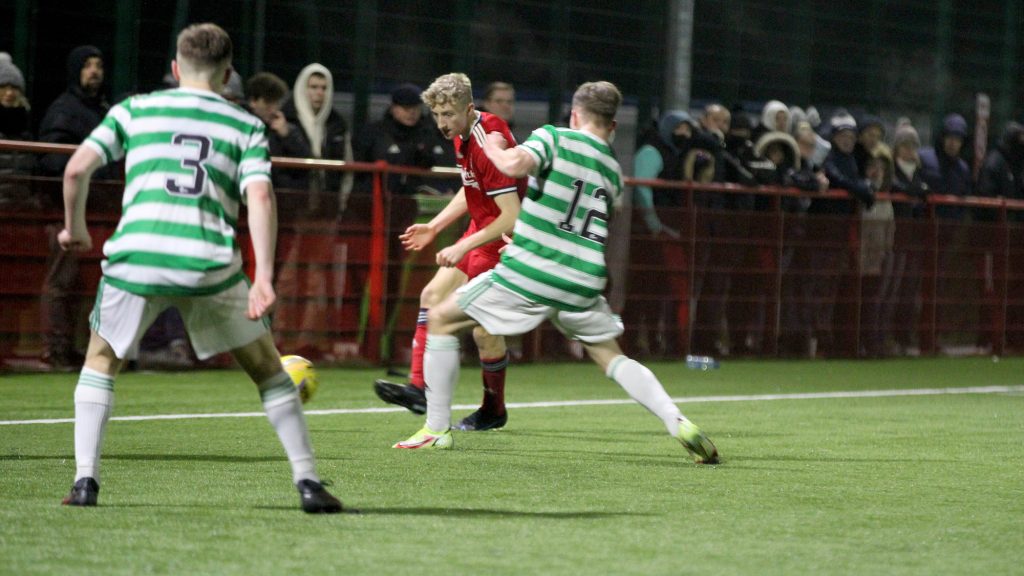 Liam Harvey had missed a golden opportunity minutes before when he was one on one with the keeper, after doing really well to work an opening, but saw his shot brilliantly blocked.

Aberdeen then won a free kick thirty five yards from goal and, when Yeats flighted the ball in, it fell nicely for Finlay Murray who smashed a great shot high into the net to give his side a deserved point, just reward for their never-say-die spirit.

So, it ended honours even, but there was still time for another red card after the final whistle, Sule the offender after a comment made to the referee.

All in all, a highly entertaining 90 minutes and a welcome return to action for Barry Robson’s boys. 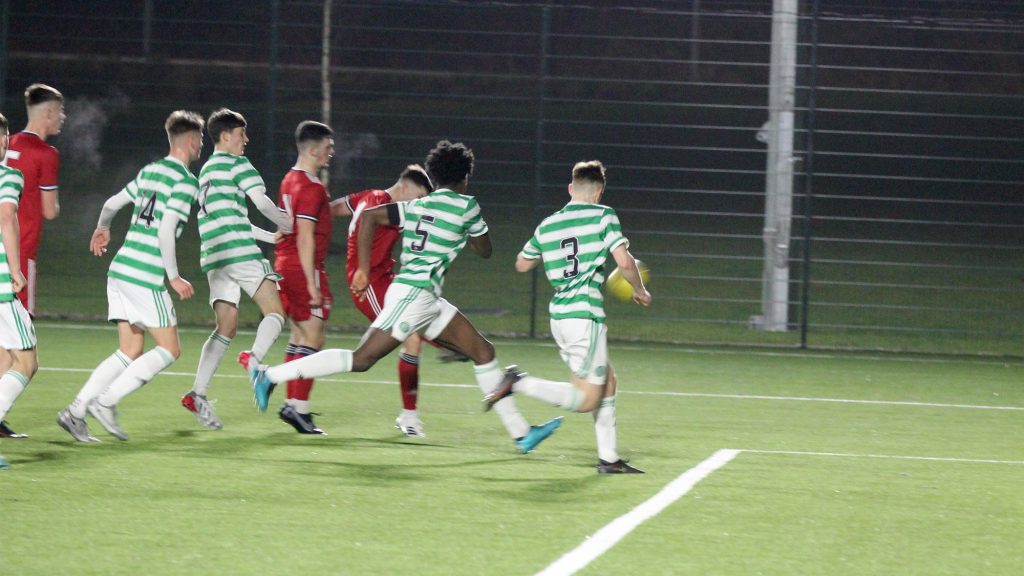 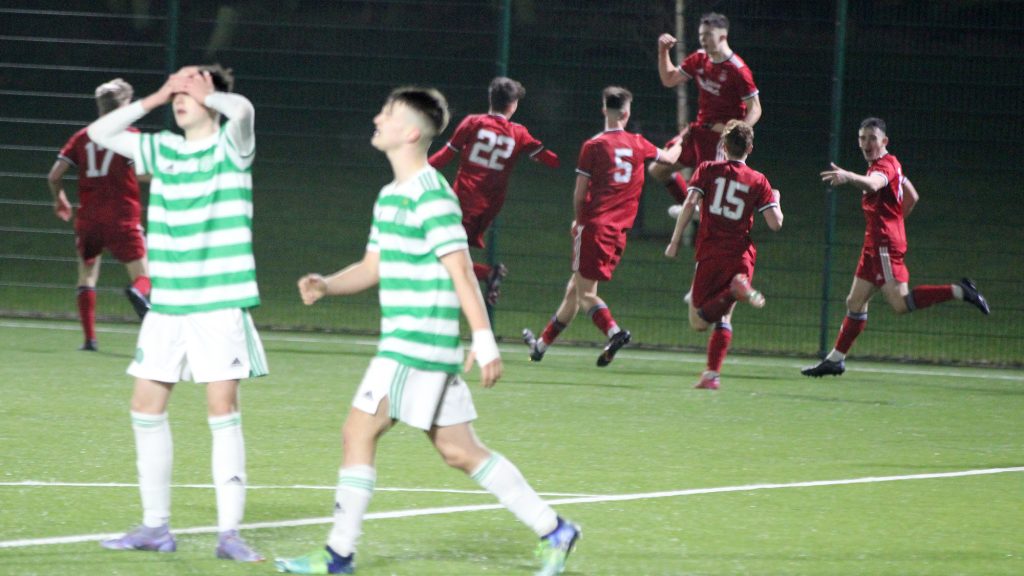