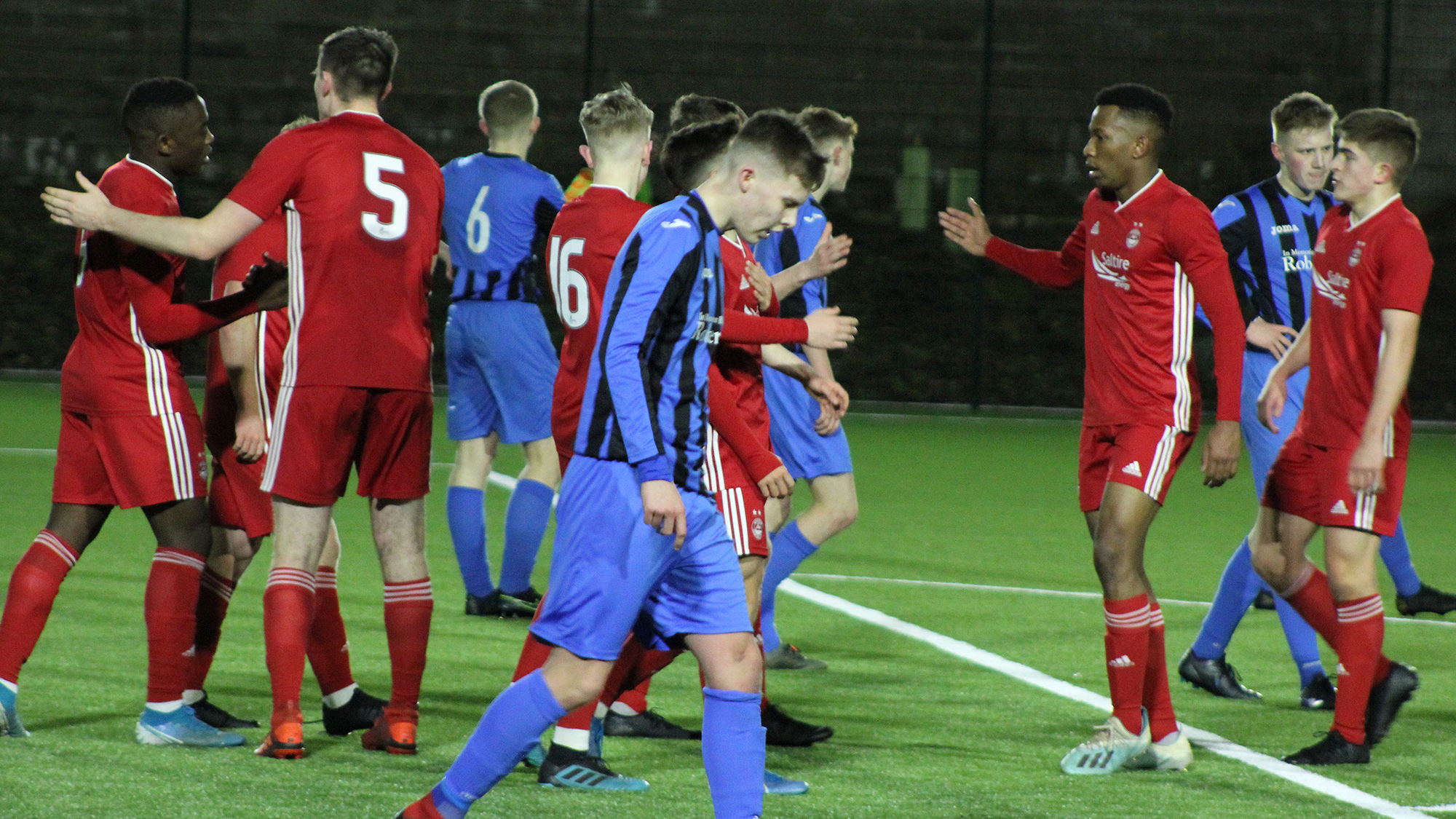 Aberdeen U18s continued their unbeaten run this season with a professional performance this evening at Cormack Park against Fife Elite. After a slow first half Barry Robson’s side increased the intensity in the second period and ran out comfortable winners. Two of the three goals came from very well worked corners.

Fife passed the ball about well in the opening stages, as they did for most of the evening.

Kevin Hanratty, who was named man of the match for the Scotland U17s in midweek, won the first corner of the game on ten minutes. Connor Barron swung in a great ball which Kyle Dalling at the back post very nearly forced home.

On 25 minutes the same players combined to give Aberdeen the lead. Hanratty took a short corner to Connor who swung in a superb ball and Dalling planted a powerful downward header into the net.

On the half hour mark Michael Dangana produced a really strong run right through the middle of the defence but as he was about to shoot a last-ditch tackle prevented the striker from getting a shot away. It would have been some goal.

Darren Dods’ side continued to play some attractive football without really troubling Tom Ritchie in the Dons goal, although on 35 minutes Aiden McLaughlin whipped in a dangerous free kick.

A minute later a Hanratty turn and shot was well handled by keeper Macallan Whyte who made a number a good stops throughout the 90 minutes. Just before half time the lively Lewis Duncan went close on two occasions – the first of which he dragged inches wide and then the second chance produced a fine save by the keeper. 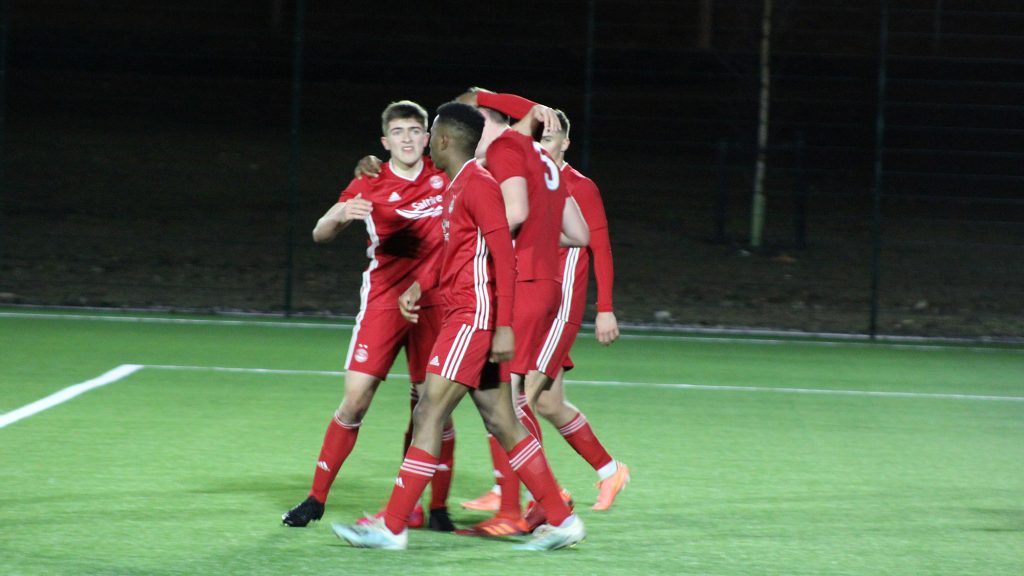 The first opening of the second half saw another powerful run by Dangana and his low shot was saved by the legs of Whyte. A minute later substitute Ryan Duncan with his first touch forced the keeper into another smart block at his near post.

Ryan, who along with Tom Ritchie and Hanratty was also on Scotland U17 duty this week, help inject a bit more urgency. Max Barry then went close with a shot.

Aberdeen had by now really stepped up the tempo and on 68 minutes they grabbed a second. Again it came from a set piece and another excellent ball in from Barron. This time his inswinger was headed home by right back Kieran Ngwenya, who had made an excellent run across the defenders.

After that it was just a case of how many the Dons would score. Barron, Hanratty and Ryan Duncan all went close, then Ryan also hit the post. Lewis Duncan had a couple of openings after good runs off his wing. Dangana did have the ball in the net from another good corner but the whistle had gone for a foul.

The game then petered out a bit towards the end but Aberdeen did add a third in injury time when substitute Jack MacIver put over a dangerous ball which fell to Max Barry and the midfielder fired it home, putting a little more gloss on the scoreline.

A good win for Aberdeen, who dealt well with the conditions, and sets them up nicely for next week’s SFA Youth Cup semi-final against Rangers at Cove. 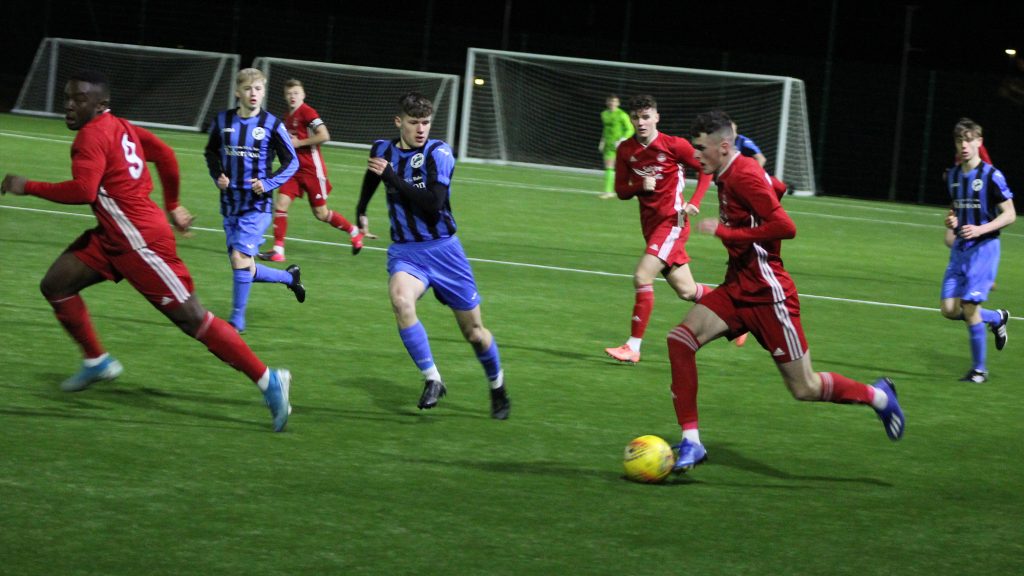 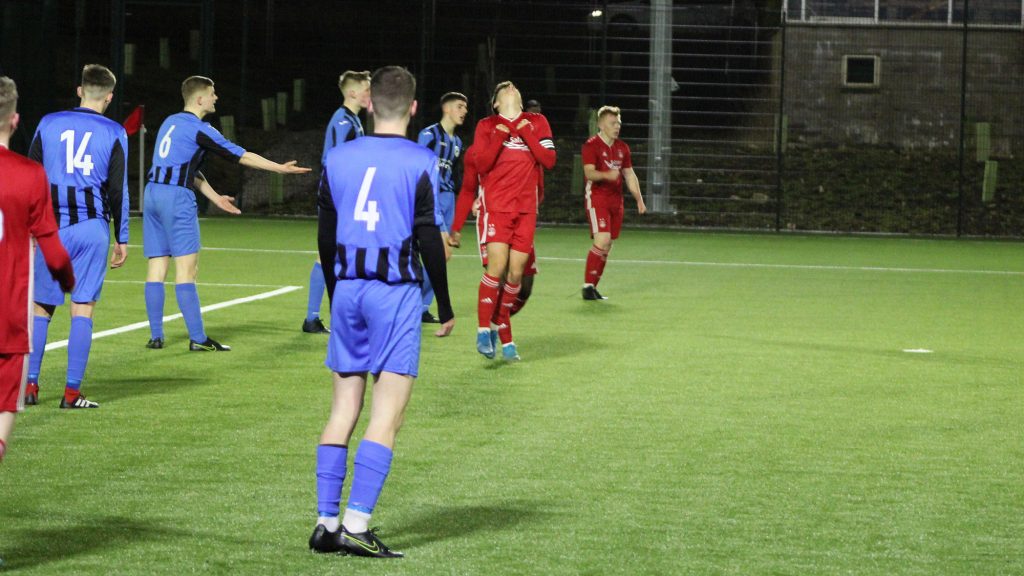