U18s | Duncan nets late on as Dons draw with United 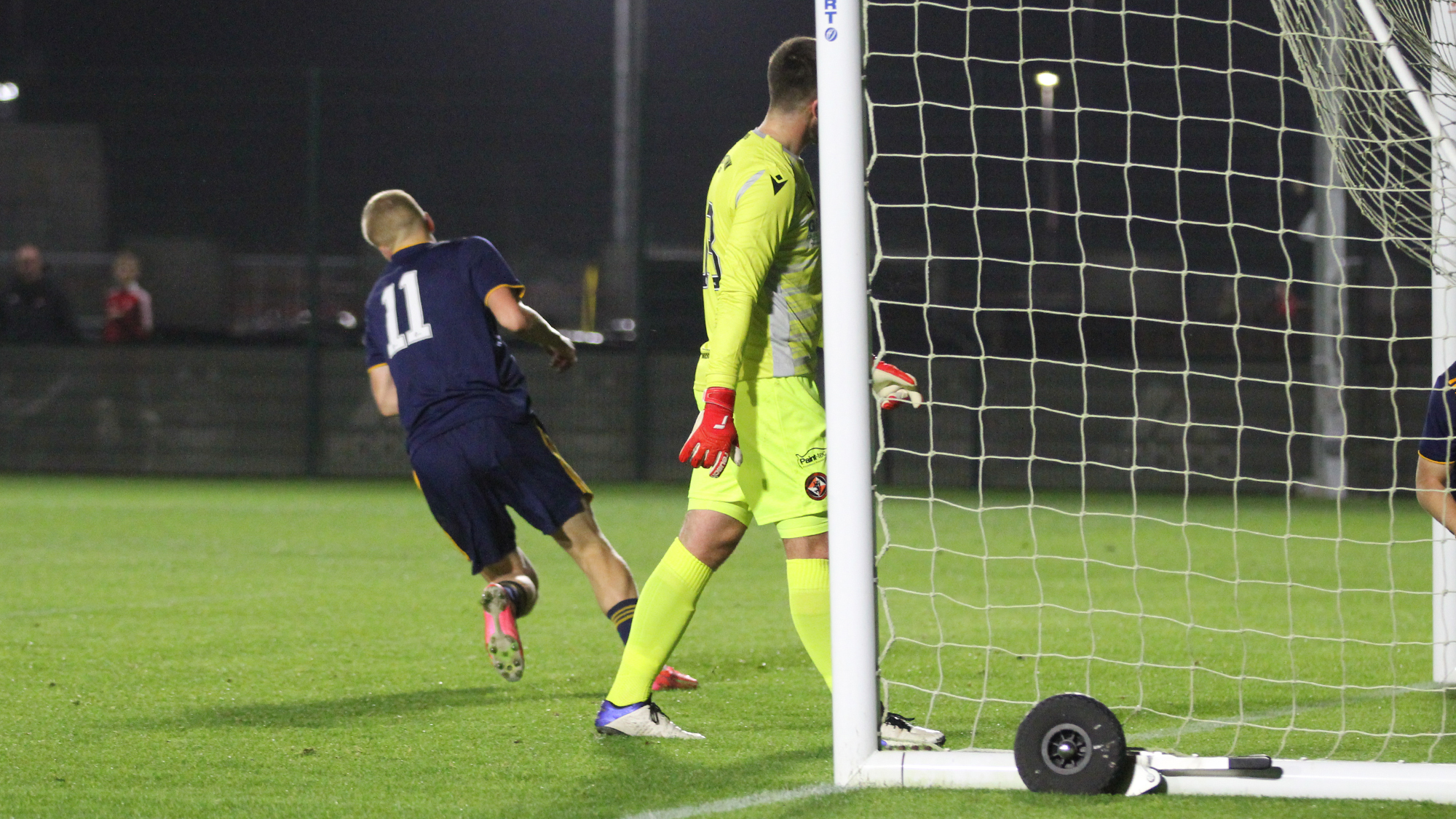 Aberdeen had to settle for a share of the spoils in tonight’s Under 18 League clash at Cormack Park, Ryan Duncan’s 85th minute strike cancelling out Stuart Heenan’s opener for the Tangerines in a hugely entertaining game which saw both sides enjoying periods of dominance.

It was no surprise to see Barry Robson name an unchanged starting eleven after the 5-0 win away to Hamilton on Friday as the Dons looked to make home advantage count against an equally youthful Dundee United side which had won each of its opening four league games.

And it was United who started on the front foot with full back Miller Thomson denied in the 6th minute by a fine block from Finlay Murray after finding himself in space for a shot at goal. 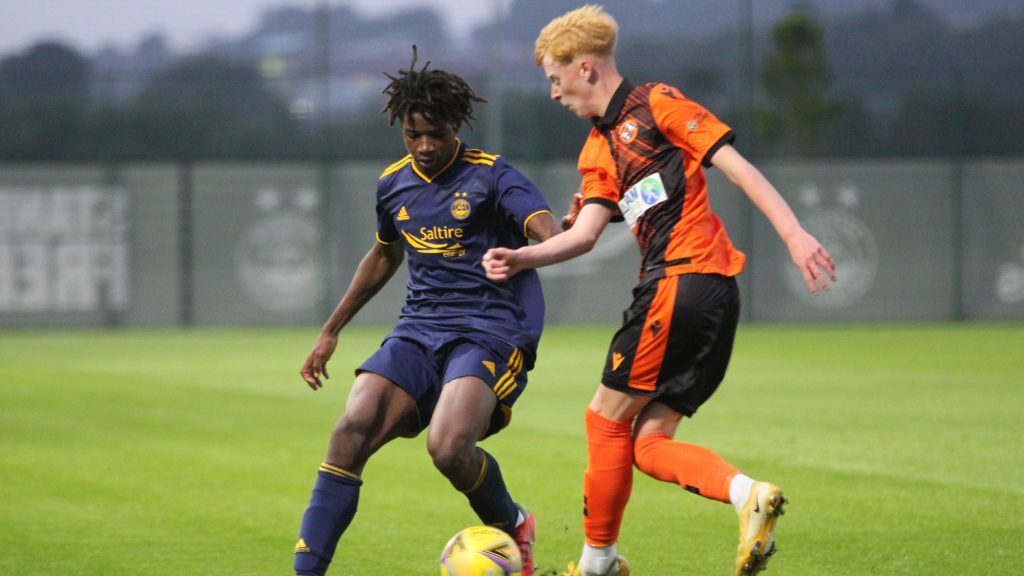 Three minutes later Blessing Oluyemi produced a fantastic save to prevent Heenan scoring before Ryan Duncan had the Dons first effort on goal lifting the ball over the bar after spotting keeper Adams well off his line.

Thomson again came close on the quarter hour mark firing inches over after good work on the left from United for whom Bryan Mwangi was prominent in the early stages.

Barry Robson switched formation to a 4-4-2 midway through the first half and it paid dividends as his team began to dominate proceedings.

Ryan Duncan fired into the side net after a dazzling run then saw a powerful left footed drive well saved by Adams.

Half time arrived with the scoreline blank, United having been the better side in the opening twenty minutes before Aberdeen asserted themselves in the later half of the opening period. All to play for in the second half. 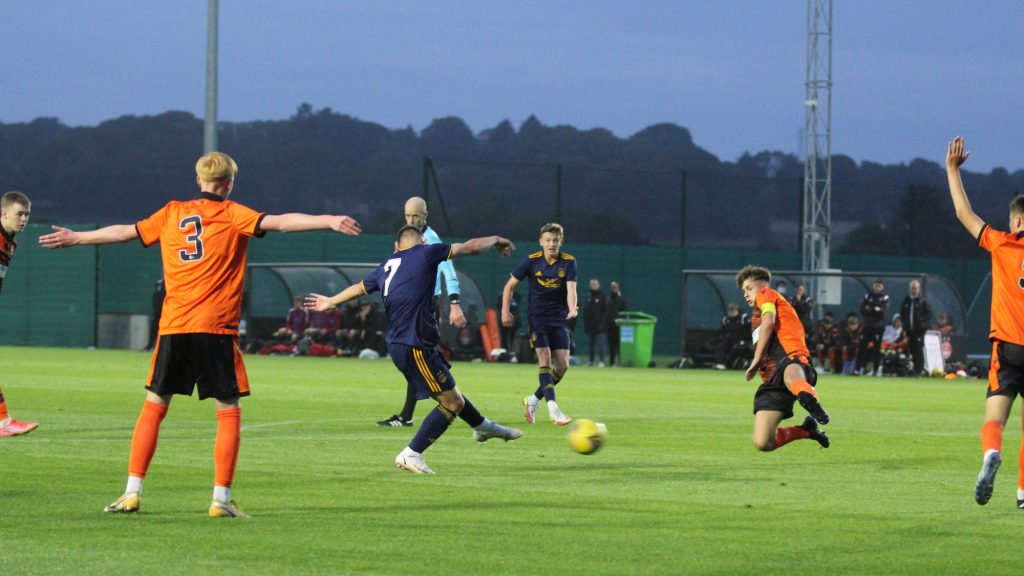 The dangerous Heenan again called Oluyemi into action early in the second 45 but again the big Dons stopper was equal to the task. Playing on the hybrid pitch at Cormack Park was proving to be good for both teams as the quick surface was highly conducive to the skilful styles of play being deployed by both coaches.

Just as Aberdeen were taking a stranglehold of the game, United opened the scoring against the run of play, the irrepressible Heenan netting from ten yards after excellent work from 15 year old Rory MacLeod.

The goal stunned the home side who rather fell out of things for a spell and Murray’s fine block to deny Naglik prevented United grabbing a second which would probably have sealed victory. 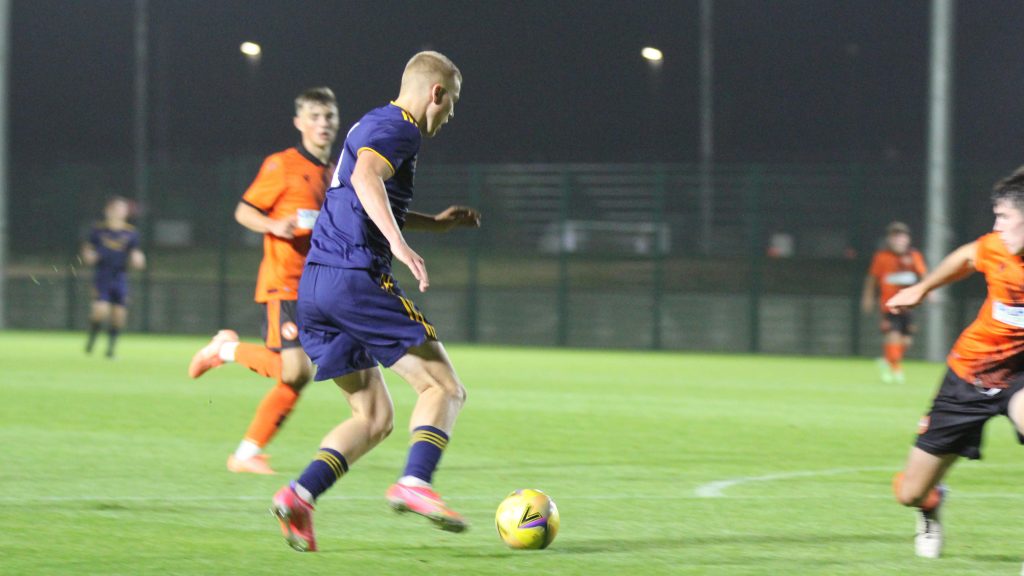 Aberdeen kept pressing but the United rearguard stood firm as the pressure began to mount.

Just when it looked as though the storm had been weathered, Aberdeen grabbed an equaliser with only five minutes of normal time remaining.

Ryan Duncan broke down the right, played a delightful 1-2 with substitute Tom Findlay before cutting inside to beat a man then slotting the ball home with that cultured left foot of his – a sixth league goal of the season which arrived just in the nick of time.

As the game went into stoppage time Duncan again came close with another excellent effort following a corner before Findlay glanced a header wide.

Honours even at the end, probably a fair result as both sides had the upper hand at different times without being able to grab an all-important second goal.

A fast competitive match saw just the two bookings, Murray of Aberdeen and Donald of United. No fewer than 19 of the 25 players who took to the field this evening are under seventeen years of age, a credit to the academy systems at both clubs. 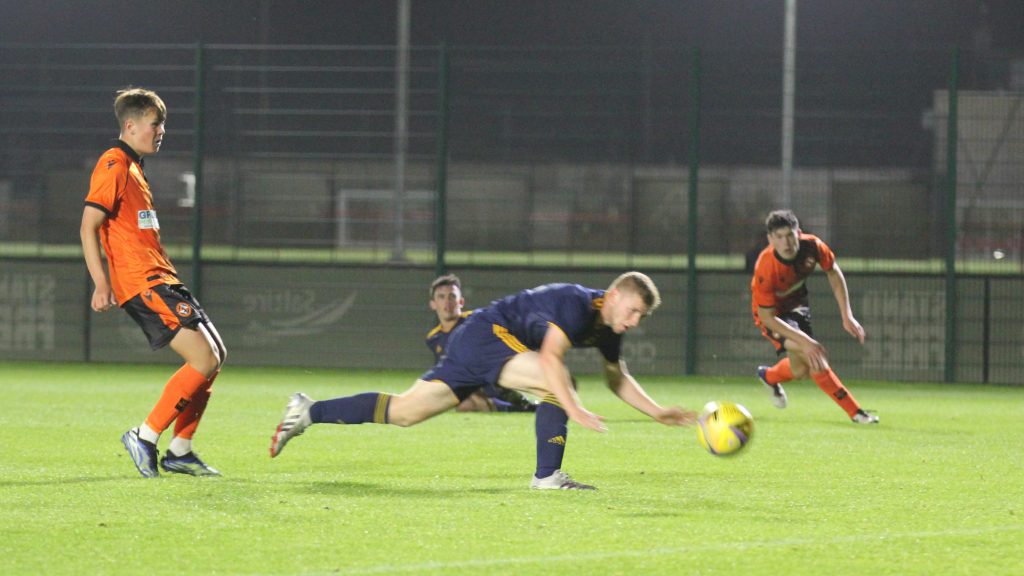