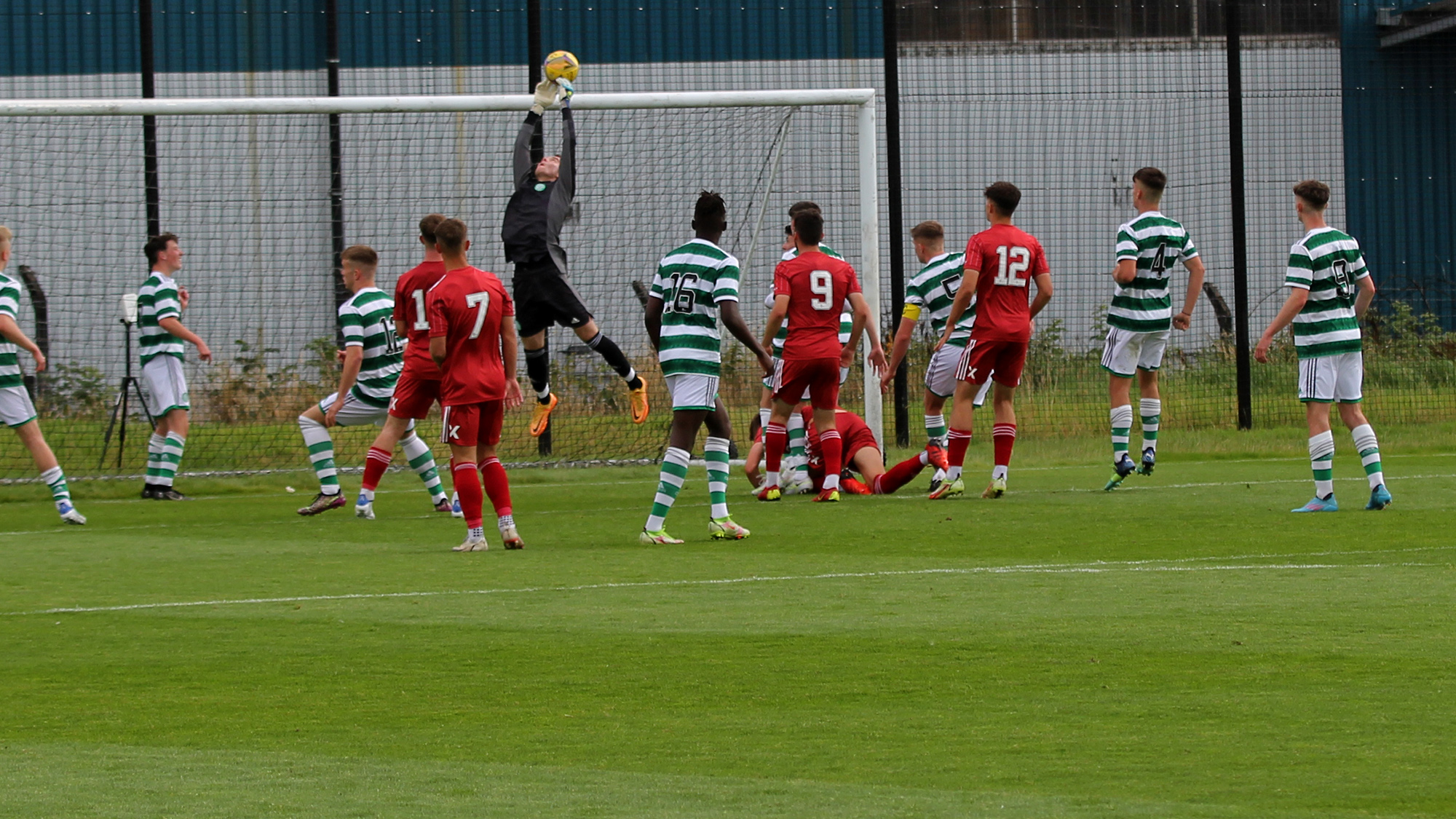 Two goals in either half gave Celtic victory at blustery Barrowfield in the CAS Under 18 League. Skipper Findlay Marshall’s 42nd minute strike proved to be only a consolation goal for the Dons although the final scoreline was perhaps flattering to the hosts.

Both sides started their CAS League seasons in positive fashion, Celtic edging a close game with Hearts by two goals to one at Oriam while Aberdeen were utterly ruthless as they slammed nine past hapless St Mirren at Cormack Park on Friday.

Barry Robson made just one change to his starting eleven, 14 year old Jamie Mercer taking the place of Brendan Hamilton who is on Under 17 international duty with Northern Ireland. The Dons were on the front foot from the off and a high press created a shooting chance for Liam Harvey, the striker’s right-footed effort going just wide.

Celtic started to take advantage of the wind advantage and aided by some slipshod passing from Aberdeen, they began to take some control particularly in the middle of the park where their physicality caused a few problems. 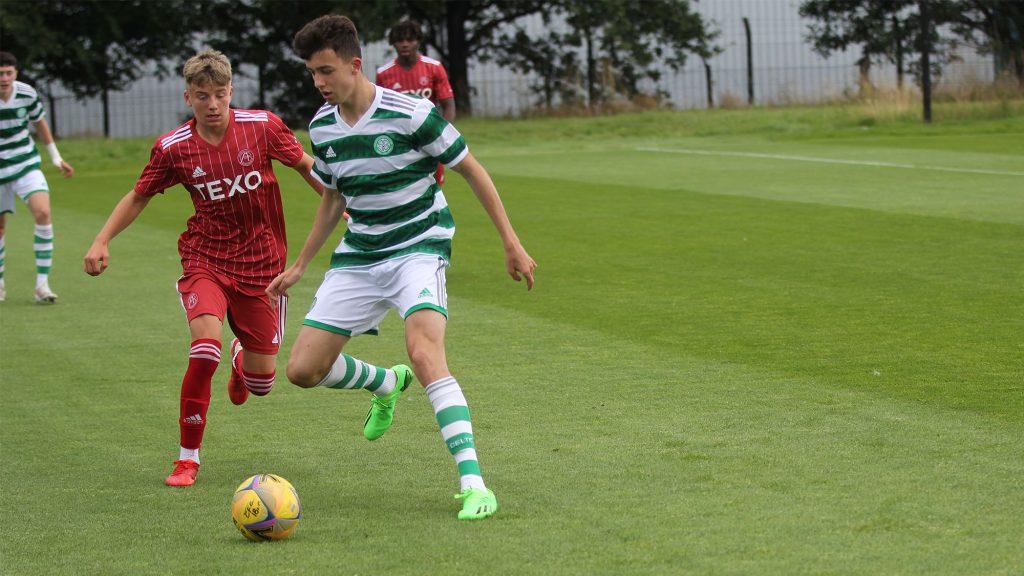 On 11 minutes the home side took the lead. A right-wing corner from Bonnar eluded everyone in the box except Easton who was lurking unmarked just beyond the back post and the Celtic number six had the easiest of tasks to bundle the ball home from close range.

Two minutes later and the buoyant Hoops doubled their advantage when the impressive Bonnar flashed a left footed drive beyond the diving Oluyemi and into the keeper’s left had corner. A fine strike, but a real blow for the Dons to find themselves two behind so early. 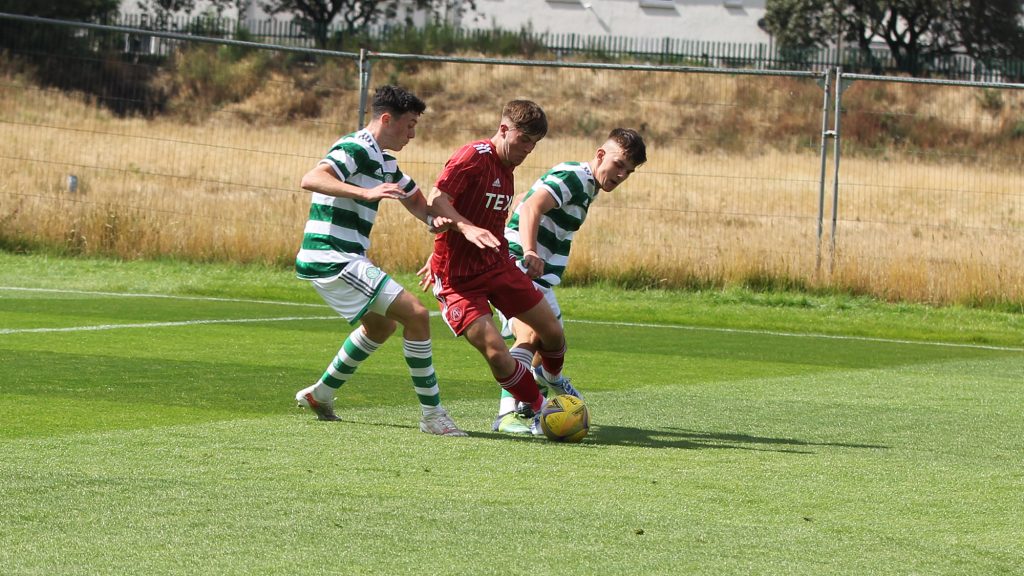 Dobbie headed over when it looked easier to score as Celtic turned the screw and only a magnificent block from Kai Watson prevented the home centre forward from putting his side out of sight. Blessing Oluyemi saved well from Easton before the Dons got themselves back into the game just before the break.

A good move down the right saw Harvey deliver a dangerous cross which keeper McLean and his defence made a real hash of clearing and when the ball fell to Marshall around twelve yards out he was alert to the chance and stabbed the ball in to give his team a timely lift.

Unfortunately for Aberdeen the half time whistle sounded at just the wrong time as they looked to have been given a real shot in the arm from the goal and were starting to look likely to score again.

After a poor opening half, the game was in the balance and, with the elements in their favour, the visitors would be looking to make an impact in the second period. 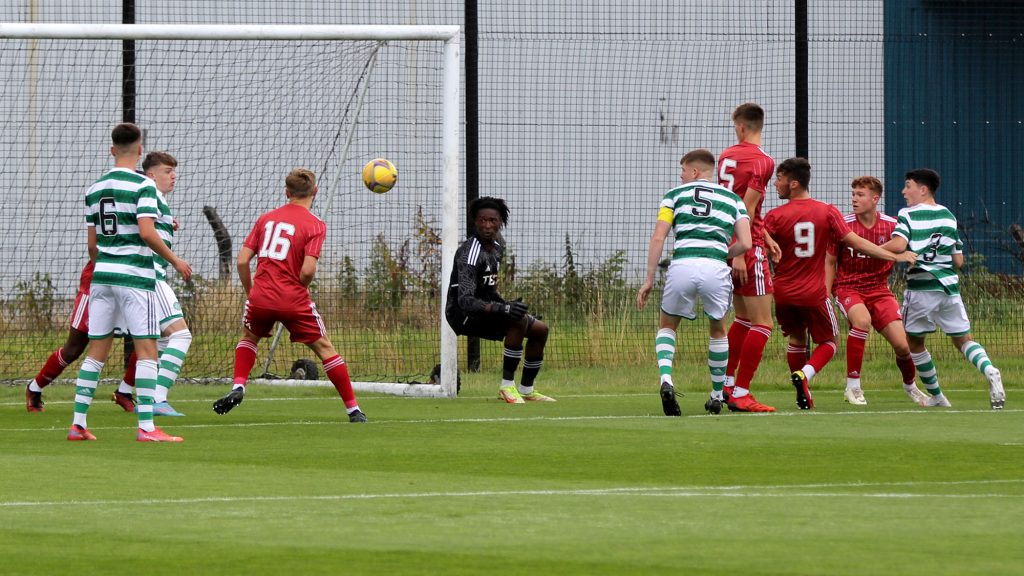 Barry Robson withdrew Jamie Mercer at the break bringing on Finlay Murray as he changed the defensive shape in order to bolster the midfield engine room.

Eight minutes into the second half, keeper McLean produced a stunning save to deny Adam Emslie from grabbing an equaliser as the Dons at last started to dominate proceedings.

But Celtic were still dangerous, and it took a fine fingertip save from Oluyemi to turn a rasping shot from the dangerous Bonnar onto the bar and away to safety.

With just under twenty minutes of the contest left play was mainly in the Celtic half and it seemed only a matter of time before the Dons equalised, both Harvey and Timi Fatona denied by excellent defensive blocks after making incursions into the area. 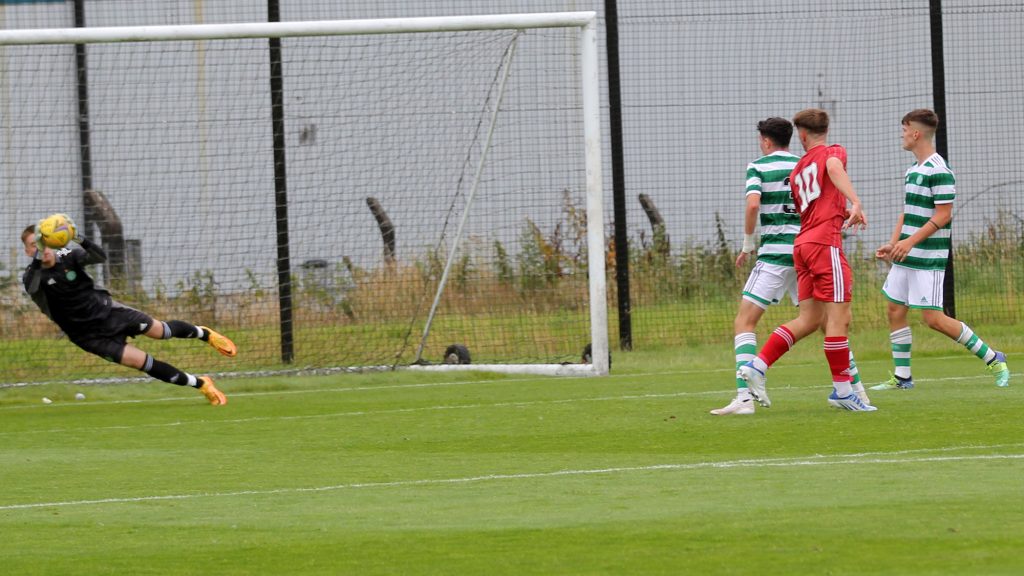 Emslie’s shot was scrambled away and seconds later Celtic broke down the right and substitute Cummings turned the ball into the middle for Dobbie to put his side two goals clear.

Cammy Wilson saw a twenty yard effort tipped onto the bar and over by McLean as the Dons continued to press but substitute Sule ensured the spoils would go to Celtic when he smashed an angled drive past Oluyemi from the left side of the box, almost a carbon copy of Bonnar’s earlier goal.

Disappointment then for Aberdeen who collectively as a team never hit the standards they will demand of themselves if they are to be successful in the game. Compared to last season, this was a much stronger, more cohesive Celtic side who, while deserving of their victory, were not as far ahead of their opponents as the scoreline would suggest.

Next up for the Dons is a long trip to Brora on Tuesday, the SPFL Trust Trophy tie at Dudgeon Park scheduled for a 7.30pm kick off. 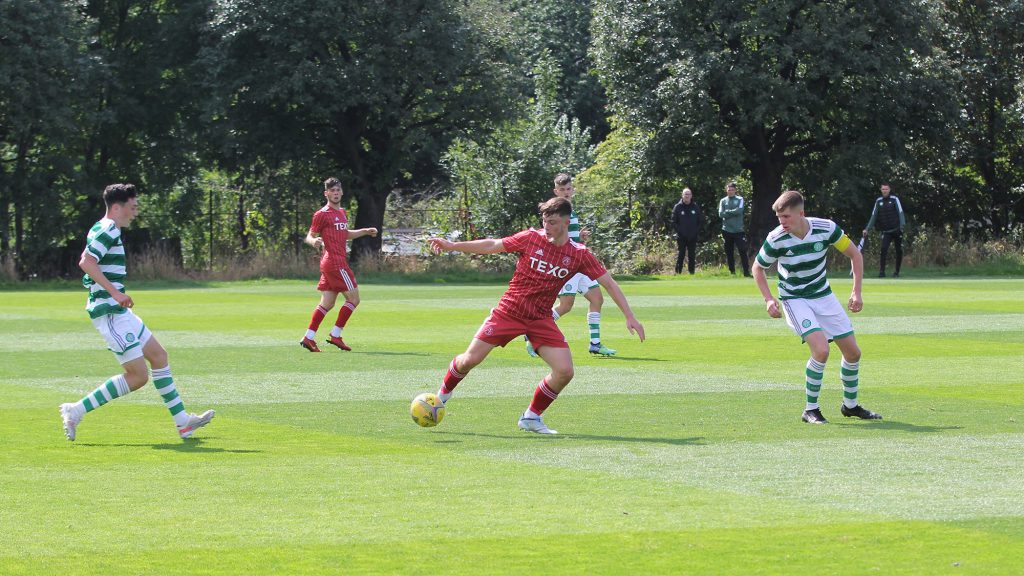