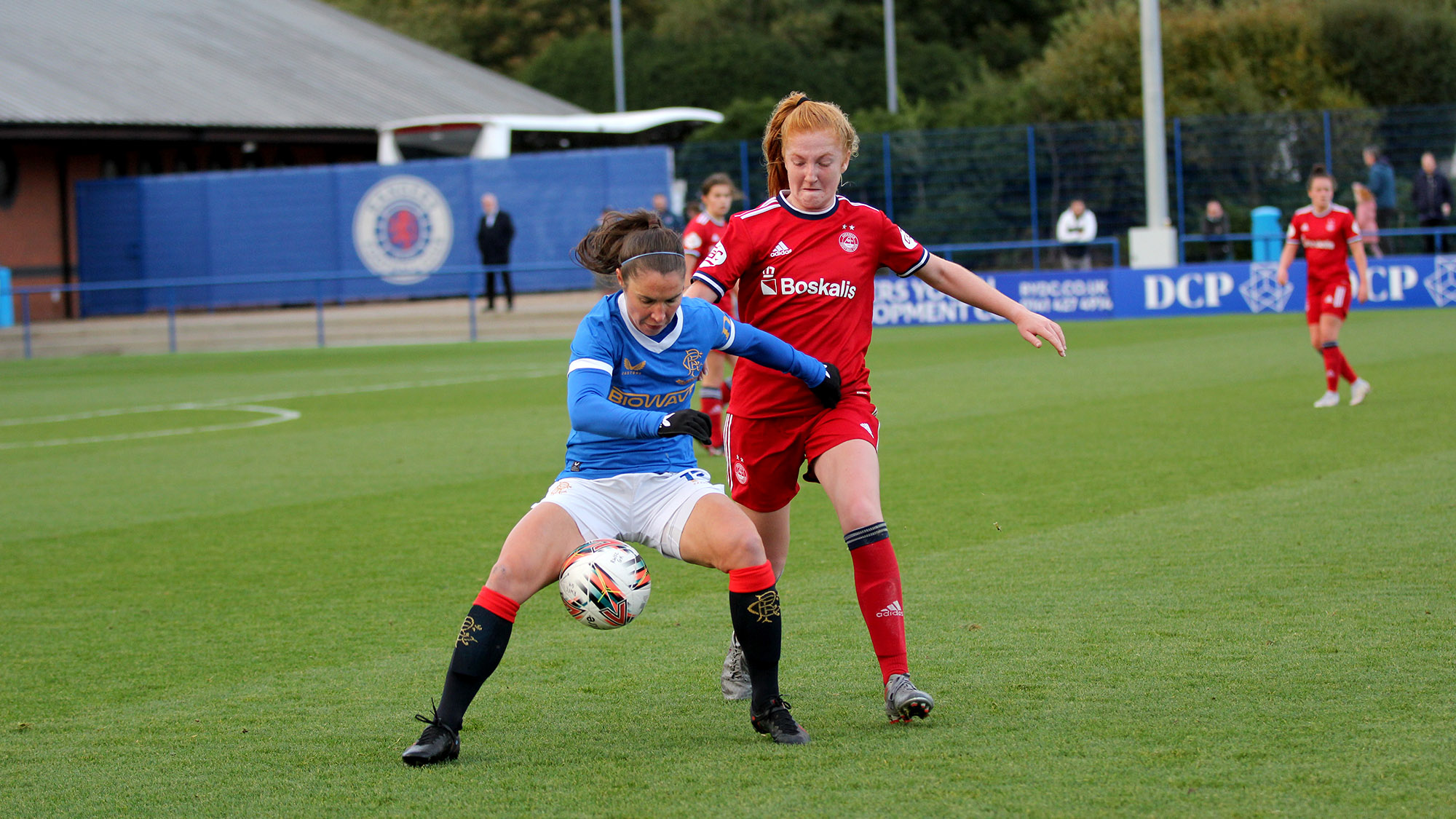 It was a tough day for Aberdeen in Glasgow as the Dons went down eight goals to nil against league leaders Rangers. The professional side showed why they have won every match this league season as their team littered with international players were just too good on the day.

There were two changes to the Aberdeen side that lost to Hearts at home last week. Francesca Ogilvie was ruled out with a head knock picked up in the latter stages of that game and she was replaced in the wide area by Chloe Gover who scored last time out against Rangers. The other change saw Bailley Collins drop to the bench to allow the industry of Natasha Bruce to be added to the midfield.

The Dons got off to the worst possible start as the hosts went in front after little more than a minute of play. Kayla MCCOY, making her first start, bravely dived in to get a touch on a ball in from the left to guide the ball beyond Gail Gilmour.

Dutch midfielder Tessel Middag then fired a shot just wide as the hosts continued on the front foot. Rangers quick start continued as they doubled their lead in the 13th minute. Brogan Hay played the ball through the Dons defence to Lizzy ARNOT who placed a composed finish into the bottom corner.

The visitors were struggling to cope with their hosts movement and quick passing but they got themselves up the pitch twenty minutes in. Eva Thomson broke down the left before finding Louise Brown 25‐yards out, she slid in Nadia Sopel who fired a shot wide of the target.

That was a brief reprieve as the home side scored again on 23 minutes. A great ball from the right by former Aberdeen Ladies player Rachel McLauchlan found MCCOY who thumped home her second of the match.

There was a lengthy stoppage in play just after the goal as Aberdeen striker Brown received treatment for a head knock and was ultimately forced off, replaced by Mya Christie.

It was 4‐0 on 36 minutes as the hosts dominance continued. Former Hibs midfielder Kirsten REILLY picked up at the edge of the box before firing an unstoppable effort into the top corner.

Things got worse for the reds just before half‐time as they fell five behind. McLauchlan was again the instigator as her low ball in front the right was met by Chelsea CORNET who slid in to find the net. 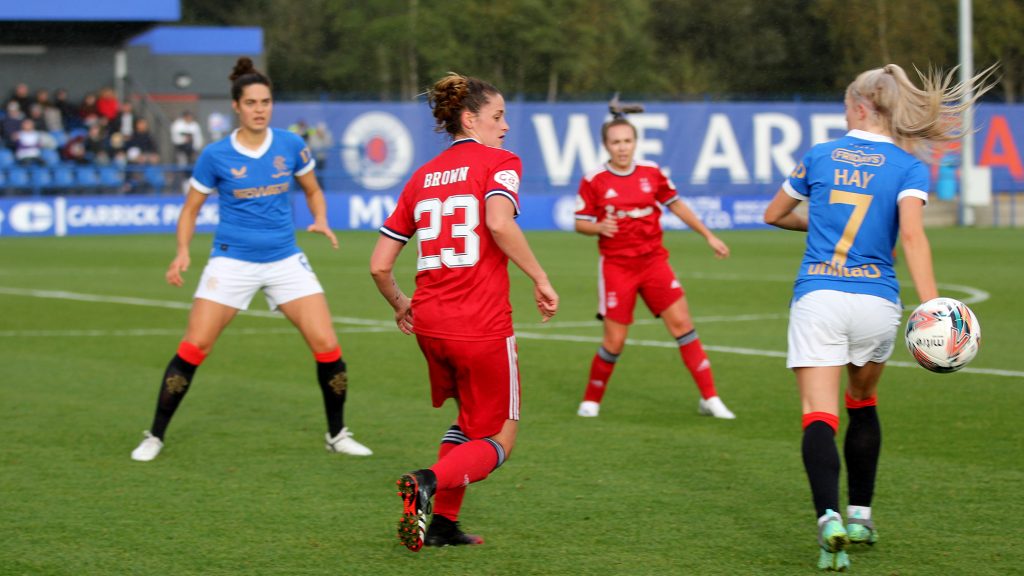 The hosts started the second period as they had the first as they scored within the opening few minutes of the re‐start. ARNOT took a corner from the right which swung over the head of everyone and it at the back post.

Two minutes later it was seven and once again it was McLauchlan that created it. The right‐back’s cross into the box found MCCOY at the back post who knocked it in off the post for her hat‐trick.

Rangers dominated the ball in the second period as the Dons managed to steady the ship to some degree. Anna Blanchard replaced Gail Gilmour in goals whilst Bailley Collins, Johan Fraser and Hannah Innes all entered the fray.

It was the league leading home side that had the final word in the closing stages of the game.

McLauchlan fired in a powerful shot, only to be denied by a fine diving save from Blanchard. Unfortunately for her Scotland striker jane Ross, on as a second half substitute, was on hand to knock home the rebound and bring a difficult afternoon to an end. 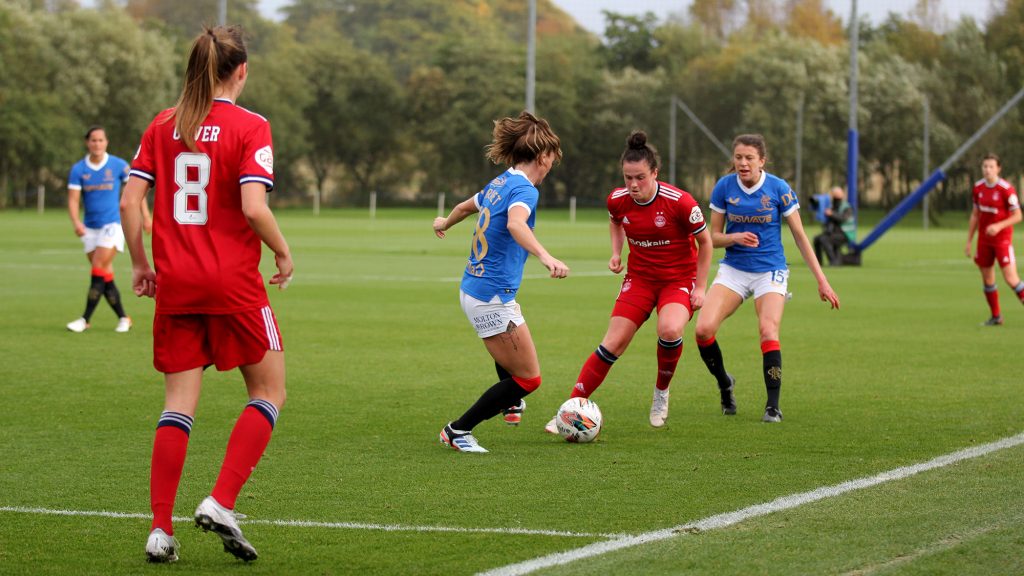 Loren CAMPBELL: “I think we were just outclassed by a professional team today and sometimes you just have to be honest about that. Not to make any excuses but we have a depleted squad with injuries and we’re a young side which has been made even younger by those coming in to replace those that are out. There is definitely things we can take from the game and although Rangers are maybe not a team we can beat right now there are others we can beat so we need to take something from today into those other games. We just have to dusted ourselves down, put this behind us and move on to next week”. 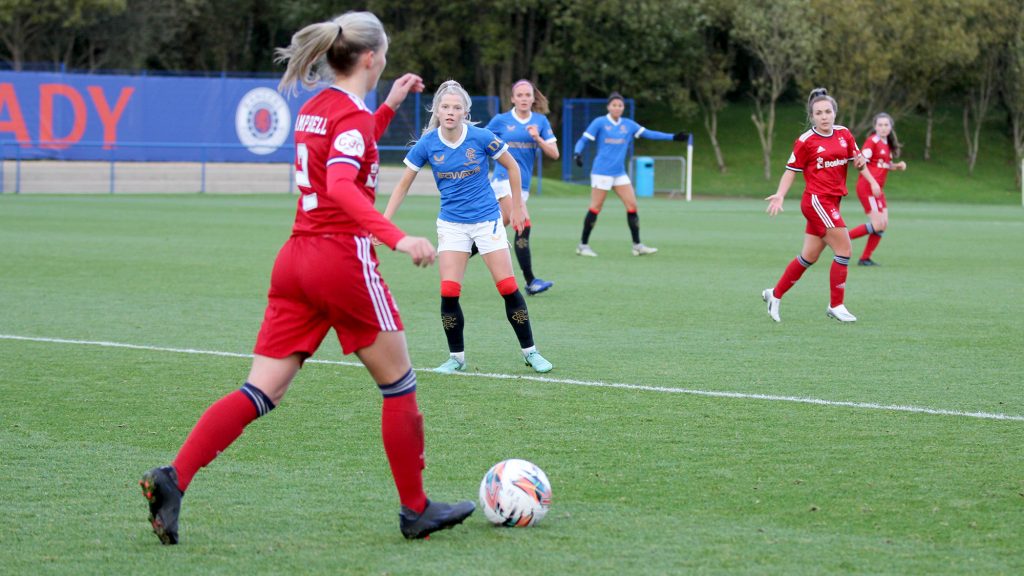