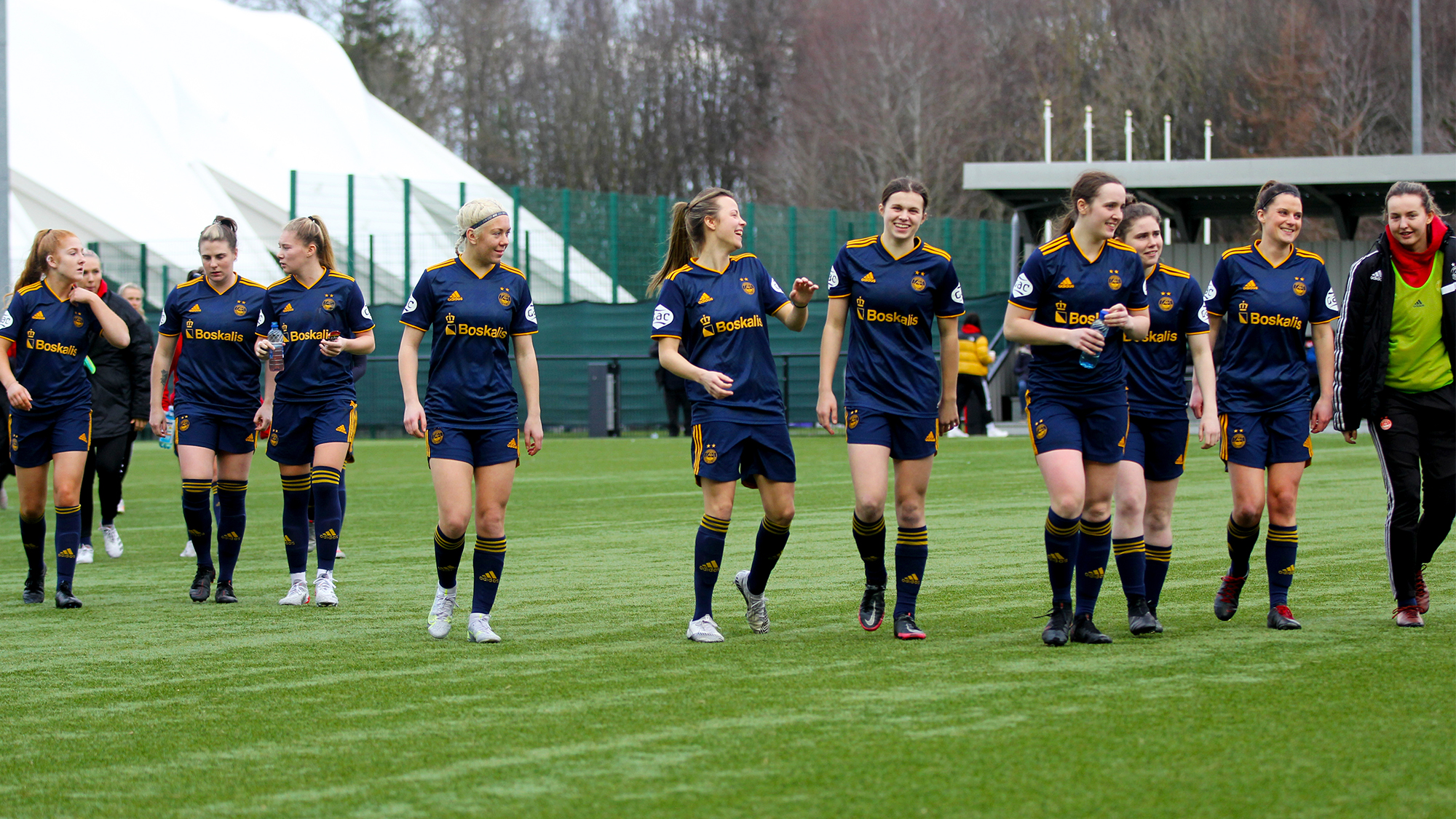 Aberdeen picked up an important three points on the road as they ran out emphatic 4‐0 winners against Hearts at The Oriam in the Park’s Motor Group SWPL1. Two strikes from Bayley Hutchison and Francesca Ogilvie and Eilidh Shore goals gave the visitors the win as Maria McAneny was sent off for the home side in the first half.

Gavin Beith and Emma Hunter made three changes to the team that lost out to Spartans last week. Captain Kelly Forrest missed out through injury while Natasha Bruce and Nadia Sopel took places amongst the substitutes. Loren Campbell returned after missing out last week and she took on the captain’s armband, Carrie Doig and Bailley Collins also returned to the starting eleven. There was also a place on the bench for new signing Hannah Stewart. 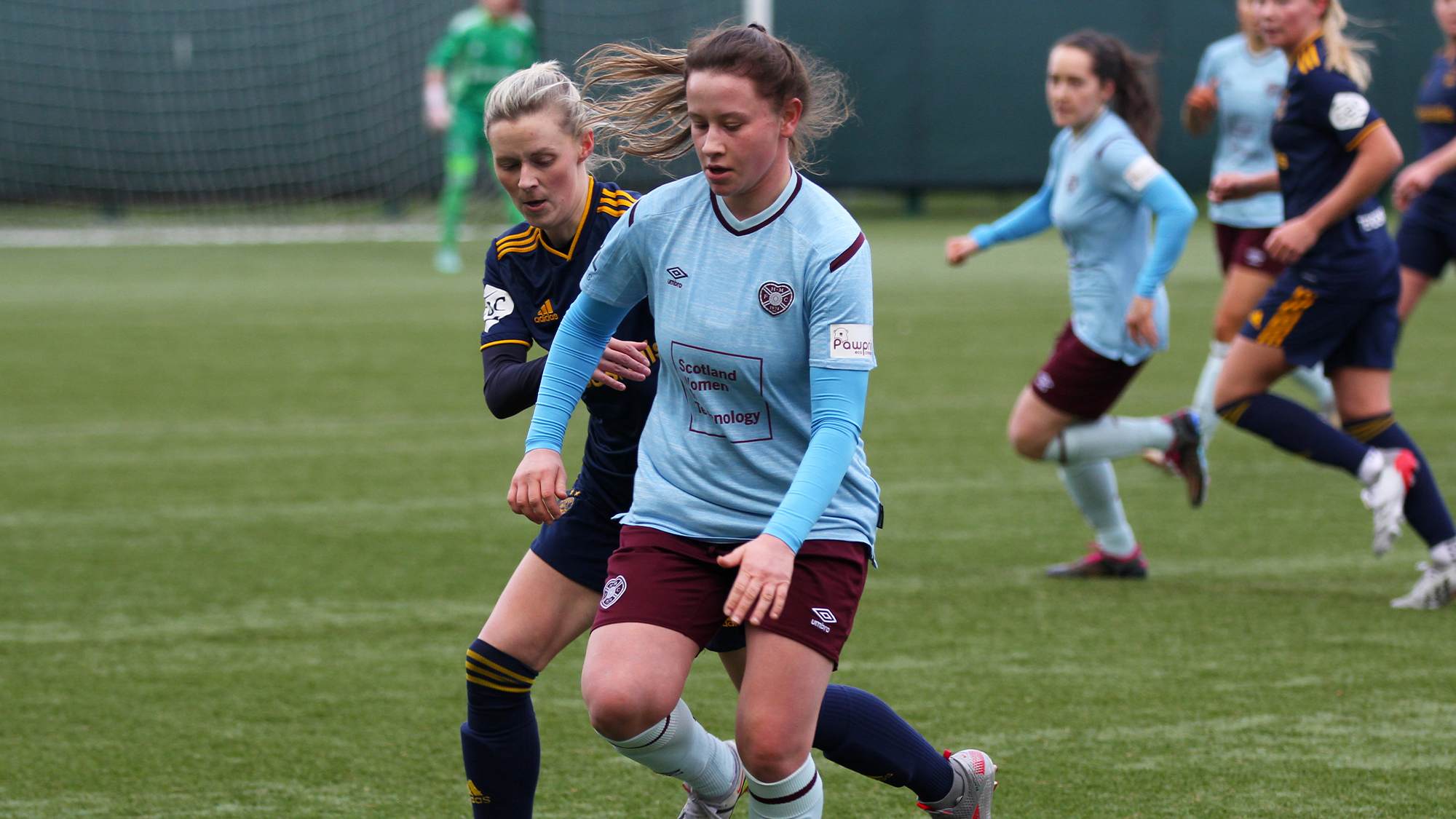 A strongly contested first half saw both sides exchange chances in the opening few minutes. Francesca Ogilvie had a goal‐bound shot blocked in the area for the Dons whilst the visitors had AJ Meach to thank for a good save to deny Maria McAneny.

Aberdeen took the lead on 16 minutes after a good move broke through the Hearts defence.

Jessican Broadrick and Eilidh Shore linked up well down the left before the ball found its way to Bayley Hutchison in the penalty area. Hutchison’s shot was well saved by Parker‐Smith in the Hearts goal only for OGILVIE to pounce on the rebound to side foot her team in front.

The hosts were reduced to ten players on 36 minutes as McAneny picked up two yellow cards in the space of eight minutes. The first caution came after a powerful run out of midfield by Shore was halted unfairly by the Hearts player. The same two players were involved in the second incident when Shore, who had a fantastic first half, got the better of McAneny in midfield before being hacked down resulting in the Hearts player getting a red card. 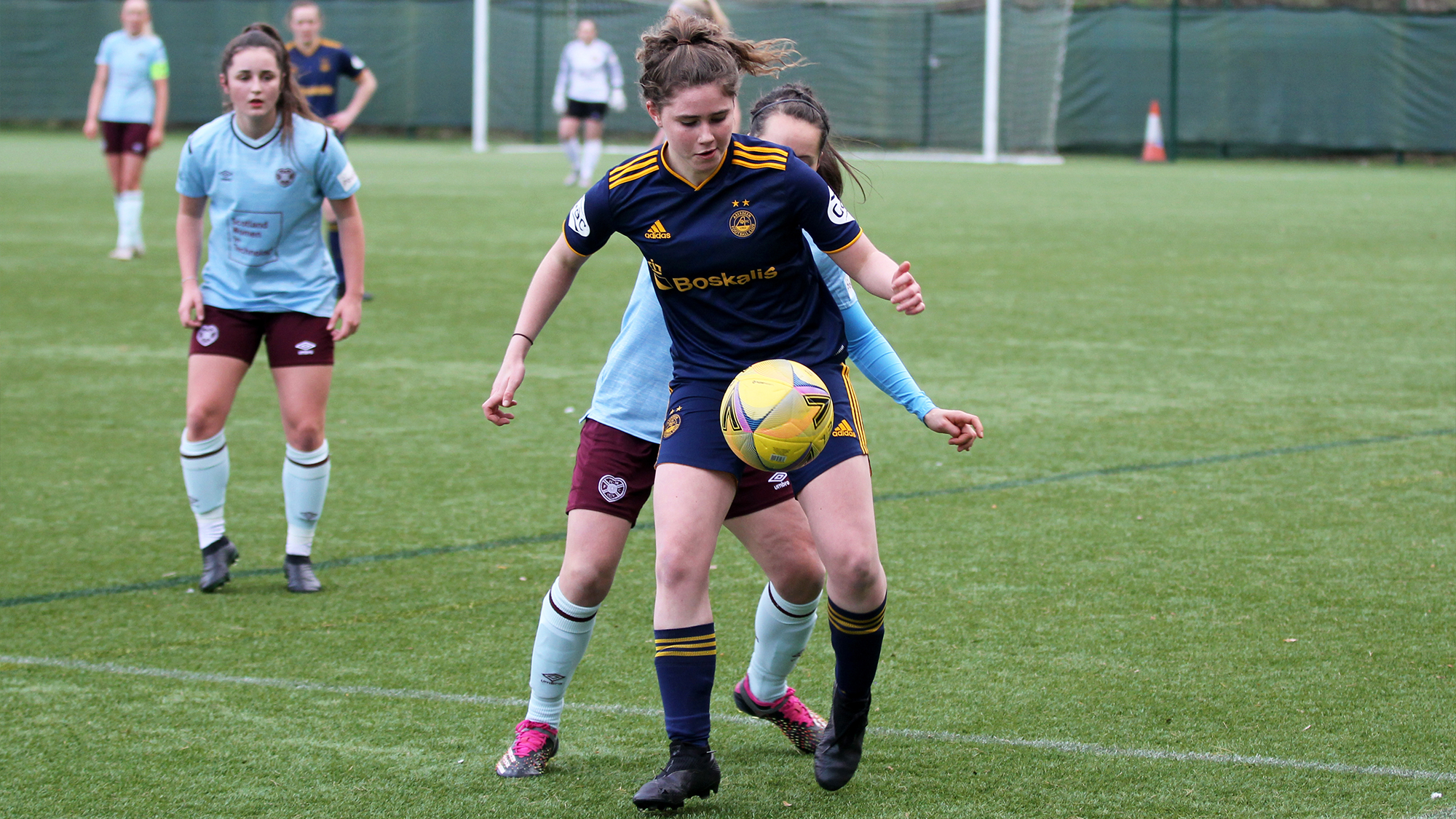 Aberdeen never managed to turn their numerical advantage into another goal as the tough tackling contest continued with Dons captain Loren Campbell picking up a caution just before the interval.

The visitors started the second half on the front foot as they impressed their one player advantage over Hearts. After dominating the ball in the opening stages, they deservedly doubled their lead on the hour. HUTCHISON was released through the middle and she out‐paced Hunter before placing a composed finish into the net.

Aberdeen didn’t need to wait long before making it 3‐0 as they ended any hopes of an unlikely comeback. A strong run by Chloe Gover down the left wing carried her into the penalty area before she fired a shot in from a narrow angle with came back off the underside of the crossbar. HUTCHISON was in the right place to pick up the rebound as she knocked home her second of the match. 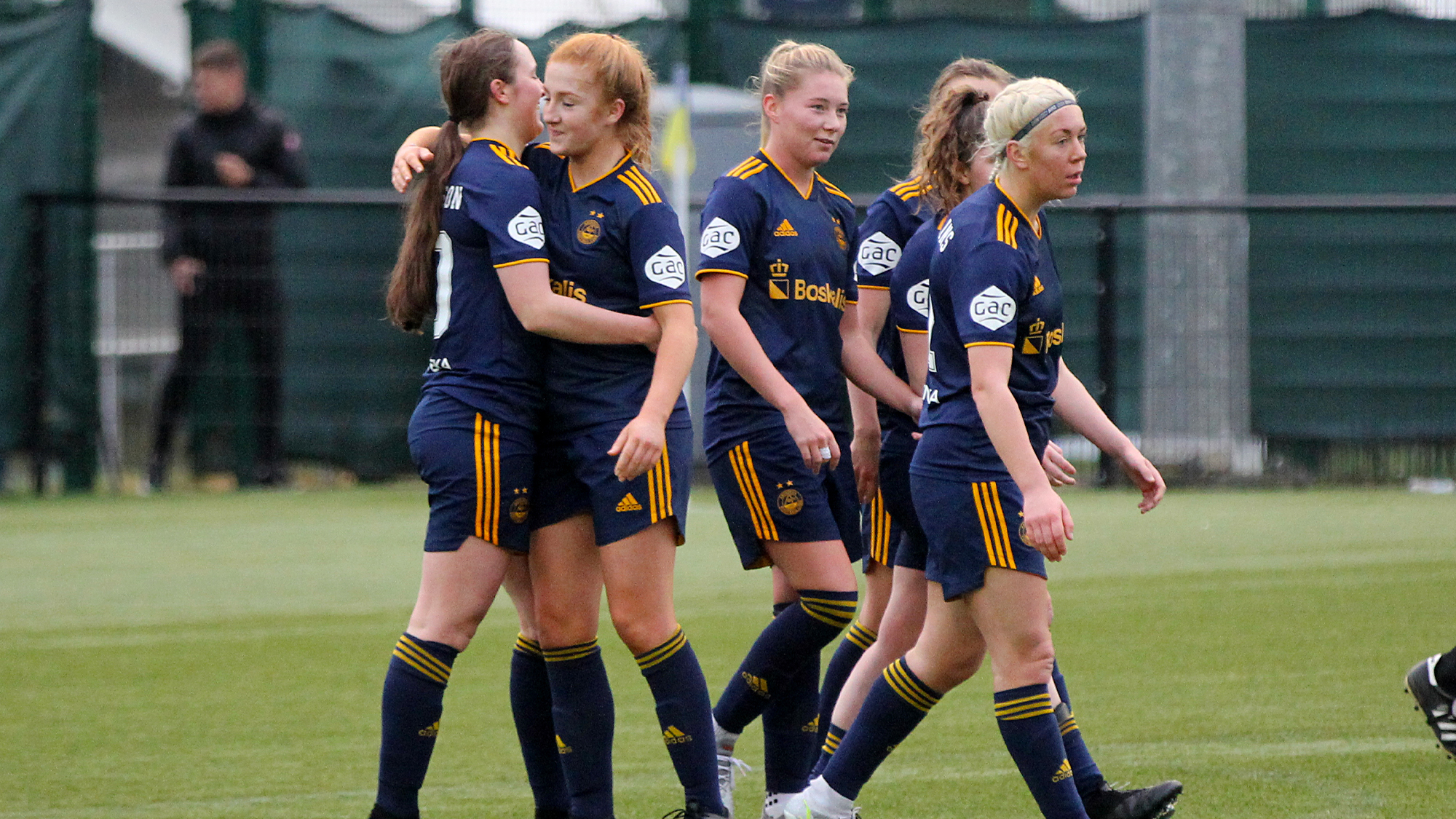 The outcome was never in doubt after that, and the Dons made a double change just after the goal as Gover and Hutchison were withdrawn. Nadia Sopel and Hannah Stewart came on in their place as Stewart made her debut.

The Dons were in control throughout with Meach’s goal never in any danger and Carrie Doig and Donna Paterson at the back were never really put under any second half pressure. The fourth goal arrived on 71 minutes, and it came from a set‐piece. Ogilvie’s corner from the left found the head of SHORE and the midfielder headed home her second goal of the season to cap a fine personal performance.

Hannah Innes, Johan Fraser and Louise Brown all got minutes as they entered the game for the closing stages that the Dons comfortably negotiated to seal a 4‐0 win.

Eilidh SHORE: “To come here and pick up a clean sheet whilst scoring four goals is really good and that three points are the most important thing. I thought it as a good performance from everyone, we knew it would be tough today, but we executed our game plane well. It was a difficult one for us to take last week but we trained well during the week, and we were confident we could bounce back here. It lifts the whole team when you get a performance like that and not only were there a few players involved in the goals, but I thought we moved the ball really well. A good performance, four goals and a clean sheet is great, and I thought from back to front we were good today”.

Emma HUNTER: “I thought we played really well today and there was a huge difference in our attitude. I think the rustiness in our play last week wasn’t there today and though there were still things we need to work on, it was a really pleasing performance. It can be difficult against ten players, but I thought we moved them about well and Eilidh Shore in particular had a great game and she dominated the middle of the park. We really controlled the game but seeing the substitutes that came on have a positive impact on the game was really pleasing. We’ll take confidence in the result and the performance, and we’ve got a short turnaround before our next game on Tuesday”. 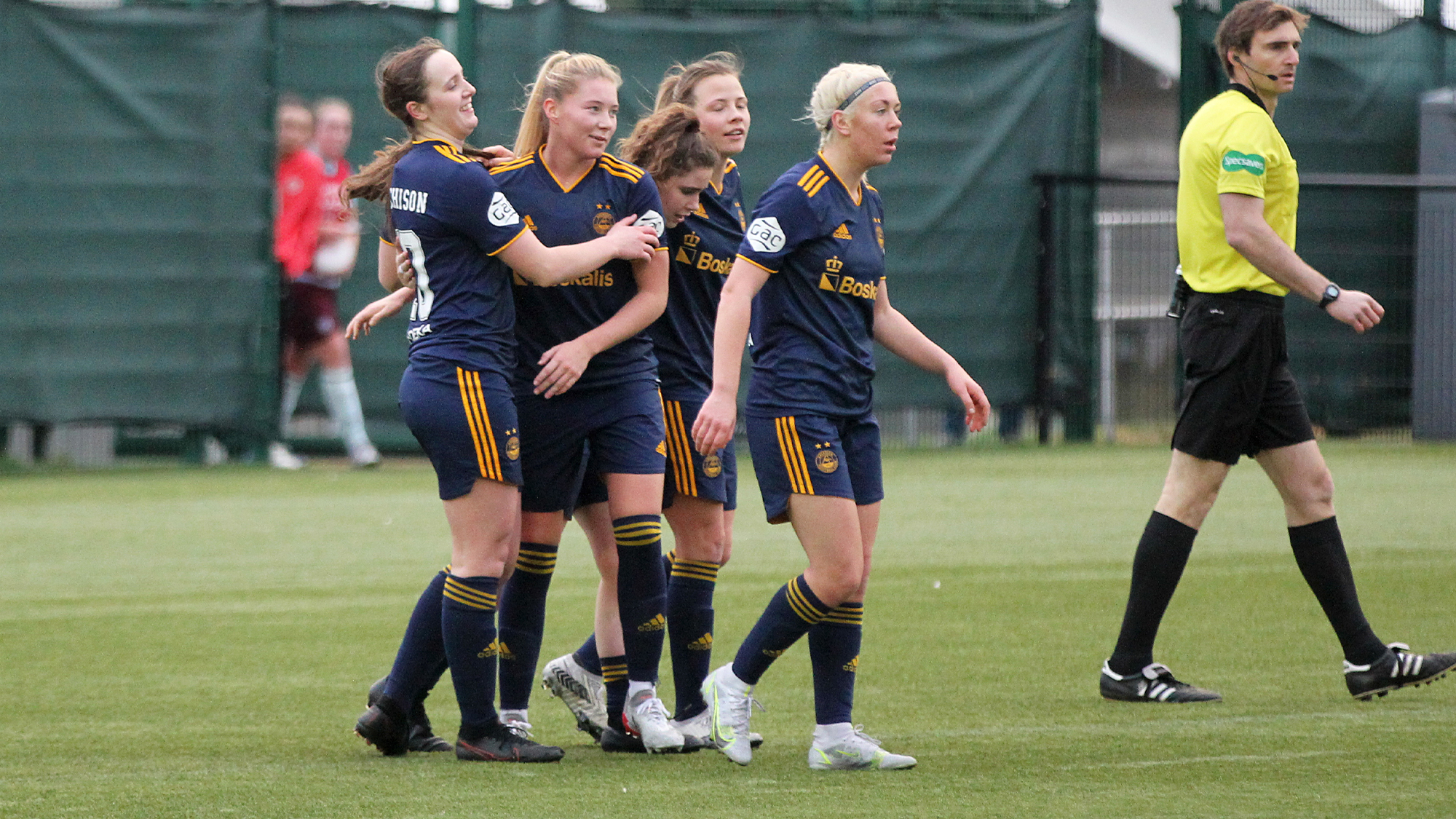