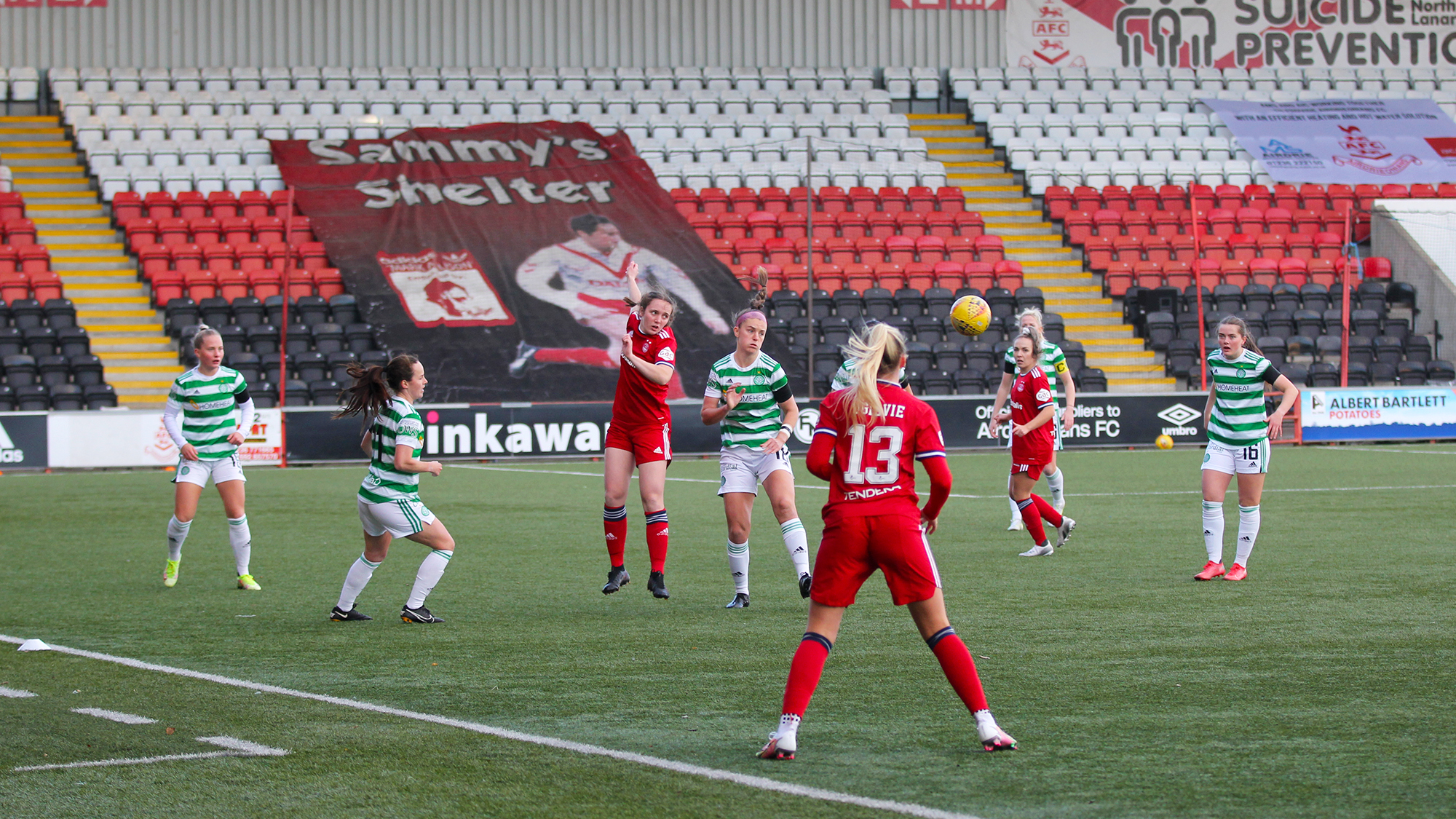 Aberdeen succumbed to a trio of late strikes as League Cup finalists Celtic came from behind to win 3‐1 in the Park’s Motor Group SWPL1 at the Penny Cars stadium. Bayley Hutchison’s first half strike had put the Dons in line for a shock win only for substitute Clarissa Larisey to score a late double before Cheyenne Shorts added a third in the final minute.

There were three changes to the Aberdeen side that went down 4‐3 to Motherwell in their match two weeks ago. Amy Strath, Nadia Sopel and Eva Thomson dropped out whilst Natasha Bruce and Bailley Collins were reinstated to the starting line‐up and captain Kelly Forrest made her first start since return from injury. There was also a place on the substitute bench for new goalkeeper AaliyahJay Meach.

The hosts, fresh from last week’s league cup semi‐final win, started on the front‐foot. Charlie Wellings latched on to a loose Francesca Ogilvie back pass in the penalty area, but the striker was denied by Gail Gilmour who was quick off her line to dive at the striker’s feet. 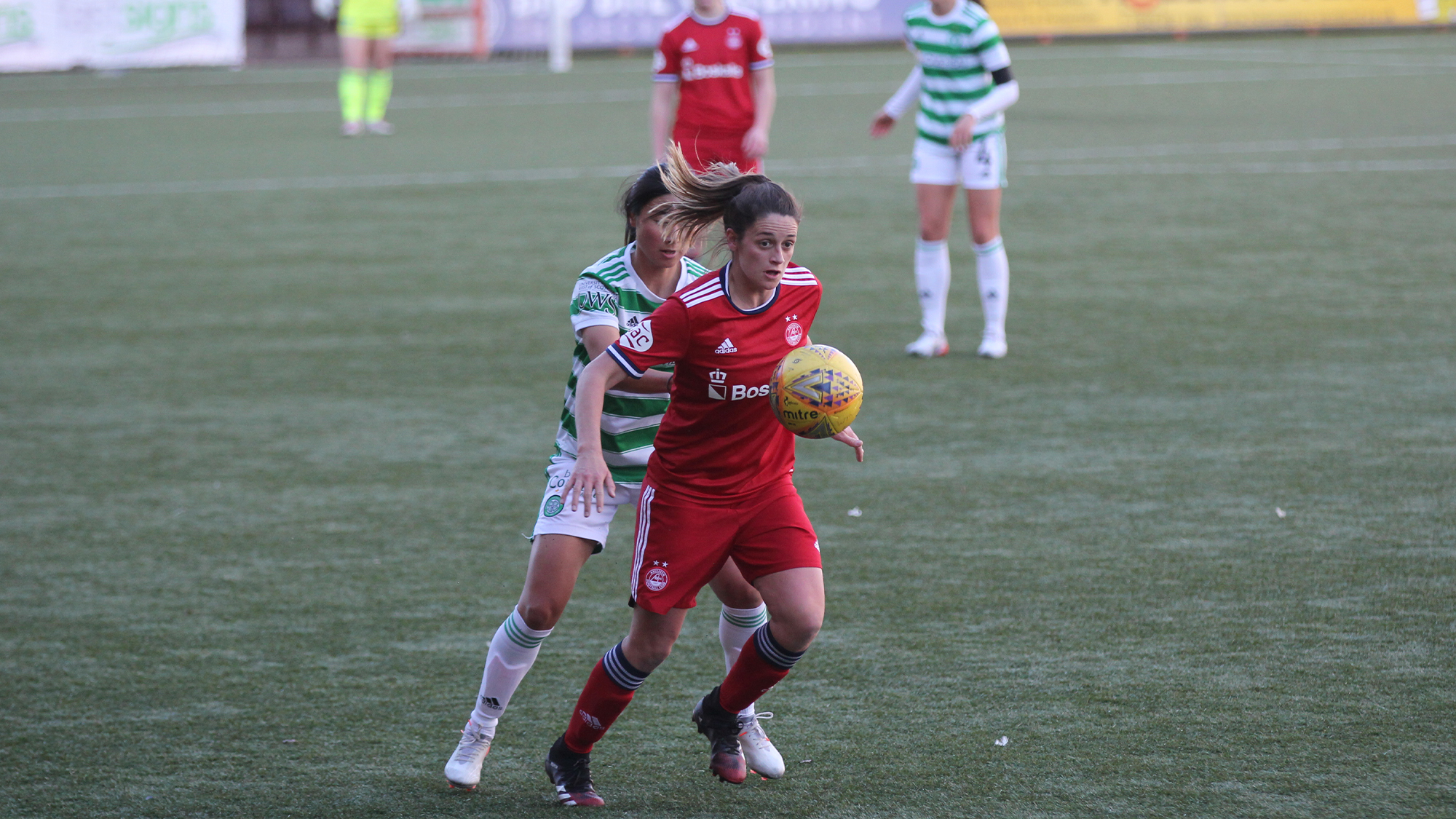 Shen then sent in a dangerous cross which was well dealt with by Forrest who blocked it behind for a corner. The resulting dead ball saw Chloe Craig get her head on the cross which looped just over the Aberdeen crossbar.

Wellings then had three chances in the space of ten minutes as the striker looked to break the deadlock. On twenty minutes the forward gathered at the edge of the box only to be denied by the out‐rushing Gilmour. Five minutes later Wellings clipped the angle of post and crossbar as she fired in a shot from the right of the penalty area. Two minutes later Wellings passed up the best chance of the lot as she sent a shot wide from the centre of goal when she looked certain to score.

After defending resolutely, it was the visitors who took the lead with a fine goal against the run of play. Pressure from the Dons attack forced a loose pass and Bayley HUTCHISON outstripped Craig for pace before placing a low finish beyond Johnstone in the Celtic goal. 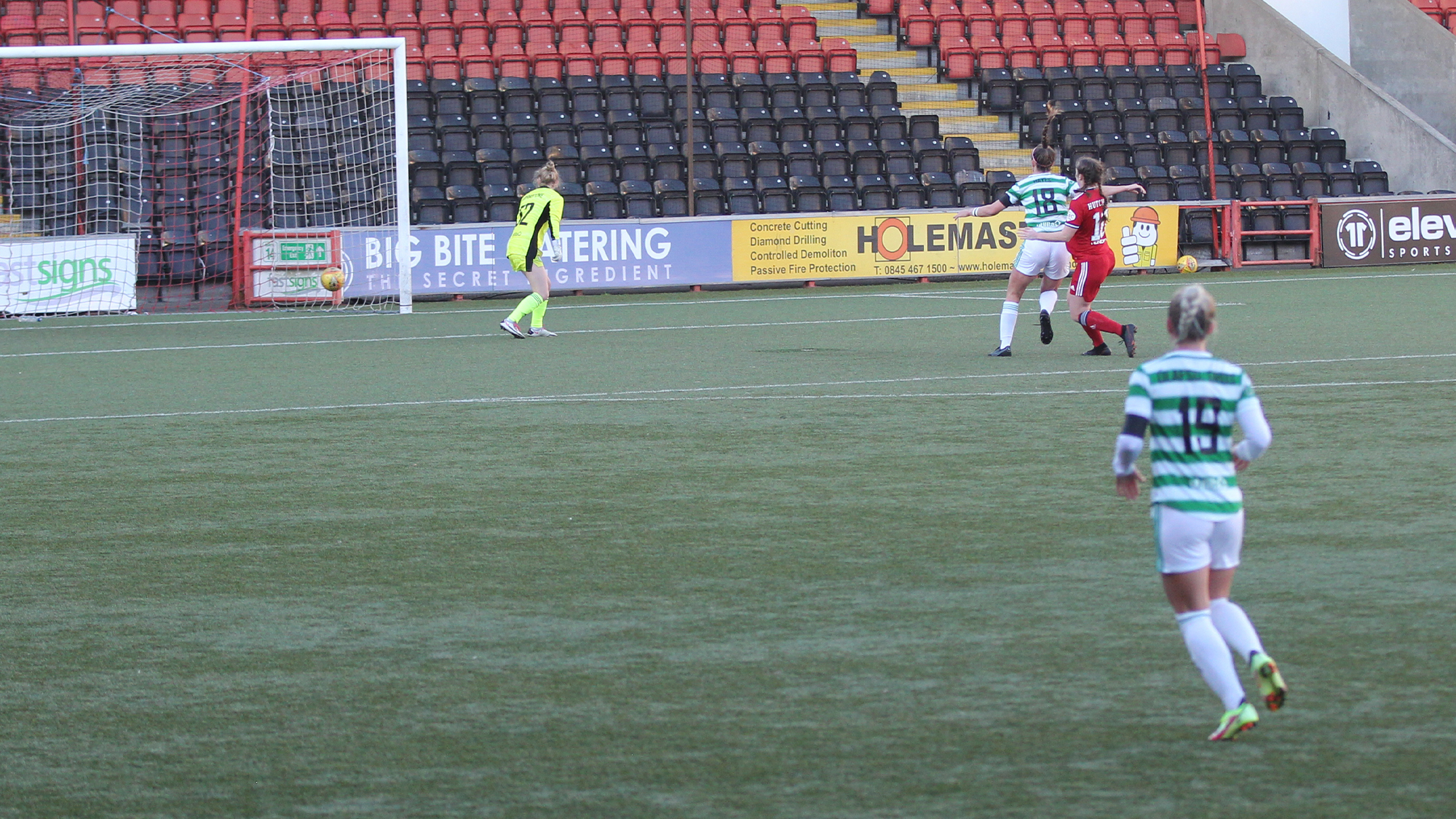 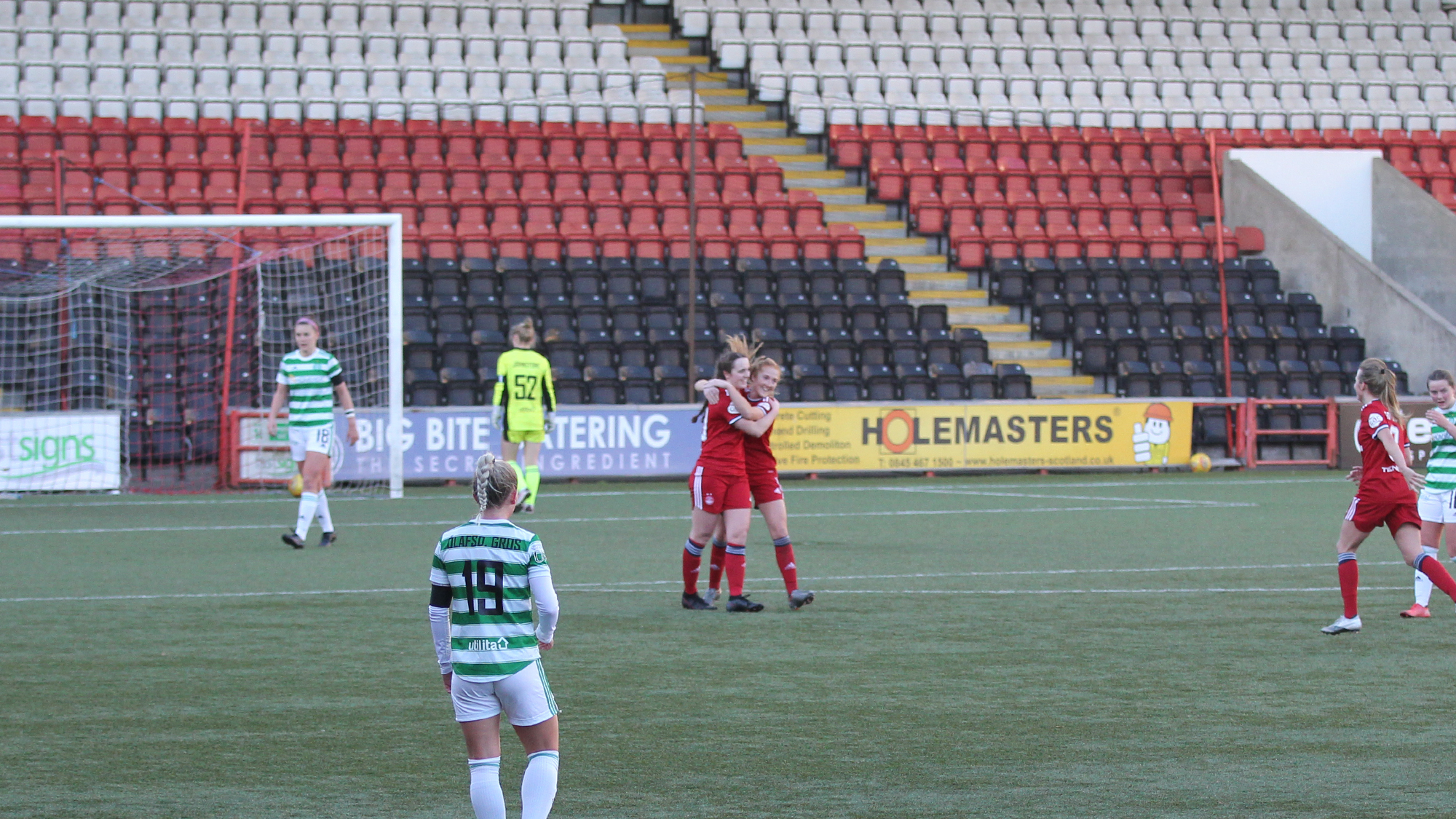 The visitors held on to their lead until half‐time although not before Celtic had another chance to score. Shen looked offside when as she went for goal, but the flag stayed down and Gilmour made a good save to maintain the Aberdeen lead going into the break.

The Dons made a change at half‐time with Nadia Sopel coming on to replace Louise Brown. The substitute was almost straight into the action as she came close to getting on the end of a Hutchison through ball at the start of the half.

Celtic had all the ball in the opening stages of the second period, but they faced an Aberdeen side who were well organised and doggedly defending their one‐goal lead and preventing any clear‐cut chances. Craig’s shot from distance wasn’t too far over the crossbar as the hosts looked for an opening.

The Dons had the woodwork to thank on the hour as Jacynta slammed a shot off the bar whilst Craig failed to head home the rebound. The Dons then made a second change as Donna Paterson replaced Natasha Bruce. 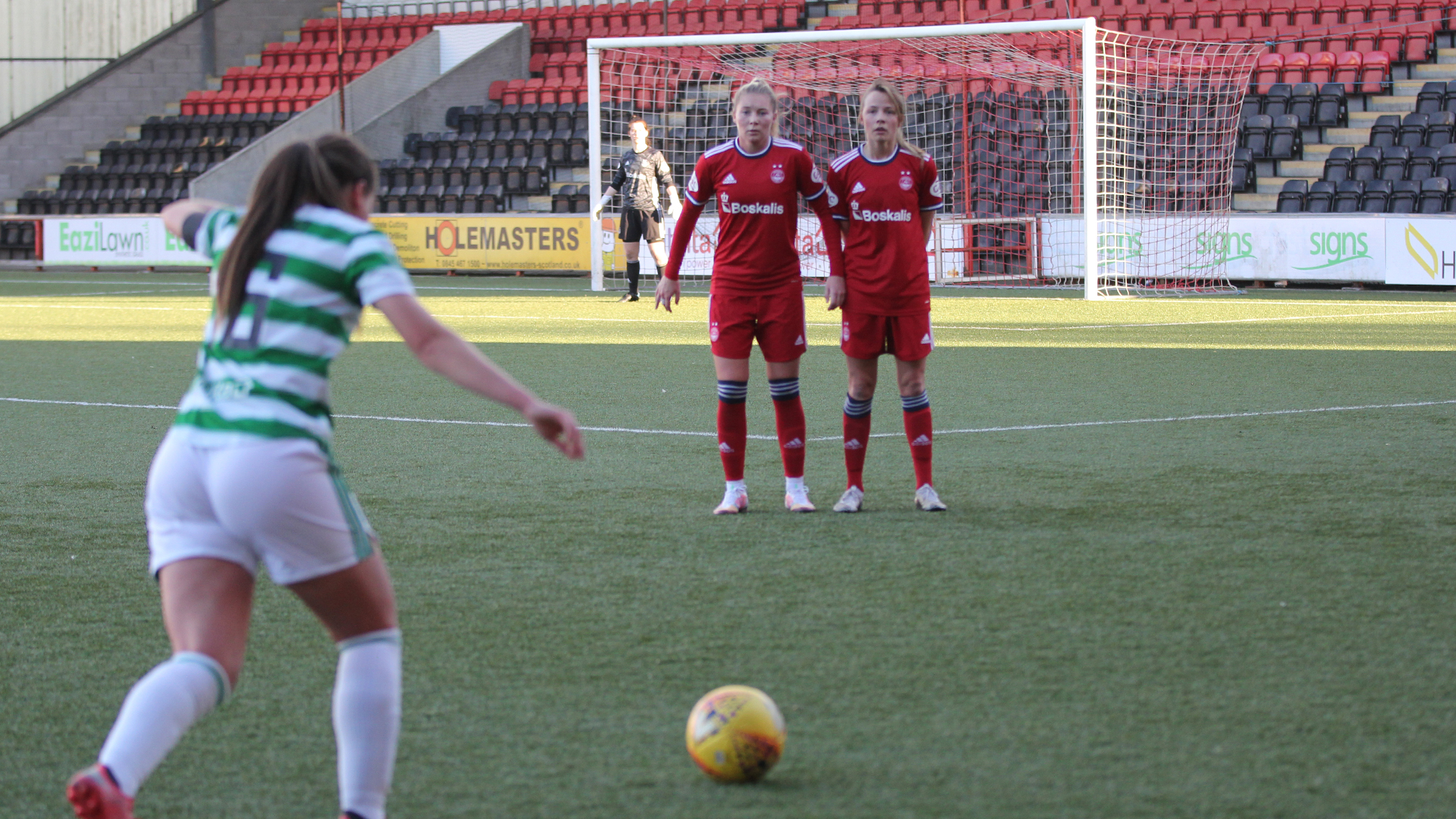 Aberdeen were looking more comfortable in the game at the midway point of the half and they started to look for second as chances on the break began to appear. Eilidh Shore burst out of midfield after picking up a loose ball and her dipping shot went just wide of the post.

Celtic made a double substitution on 71 minutes as Izzy Atkinson and Clarissa Larisey were introduced and it was the latter that made an instant impact. A ball over the top of the Dons defence found LARISEY who nudged the ball beyond Gilmour for 1‐1.

It was the same player who gave the hosts the lead on 86‐minutes as Aberdeen’s stout defence was broken again. A shot from the edge of the box deflected to LARISEY who looked offside as she found the net but despite the complaints from the Dons defence the flag stayed down. 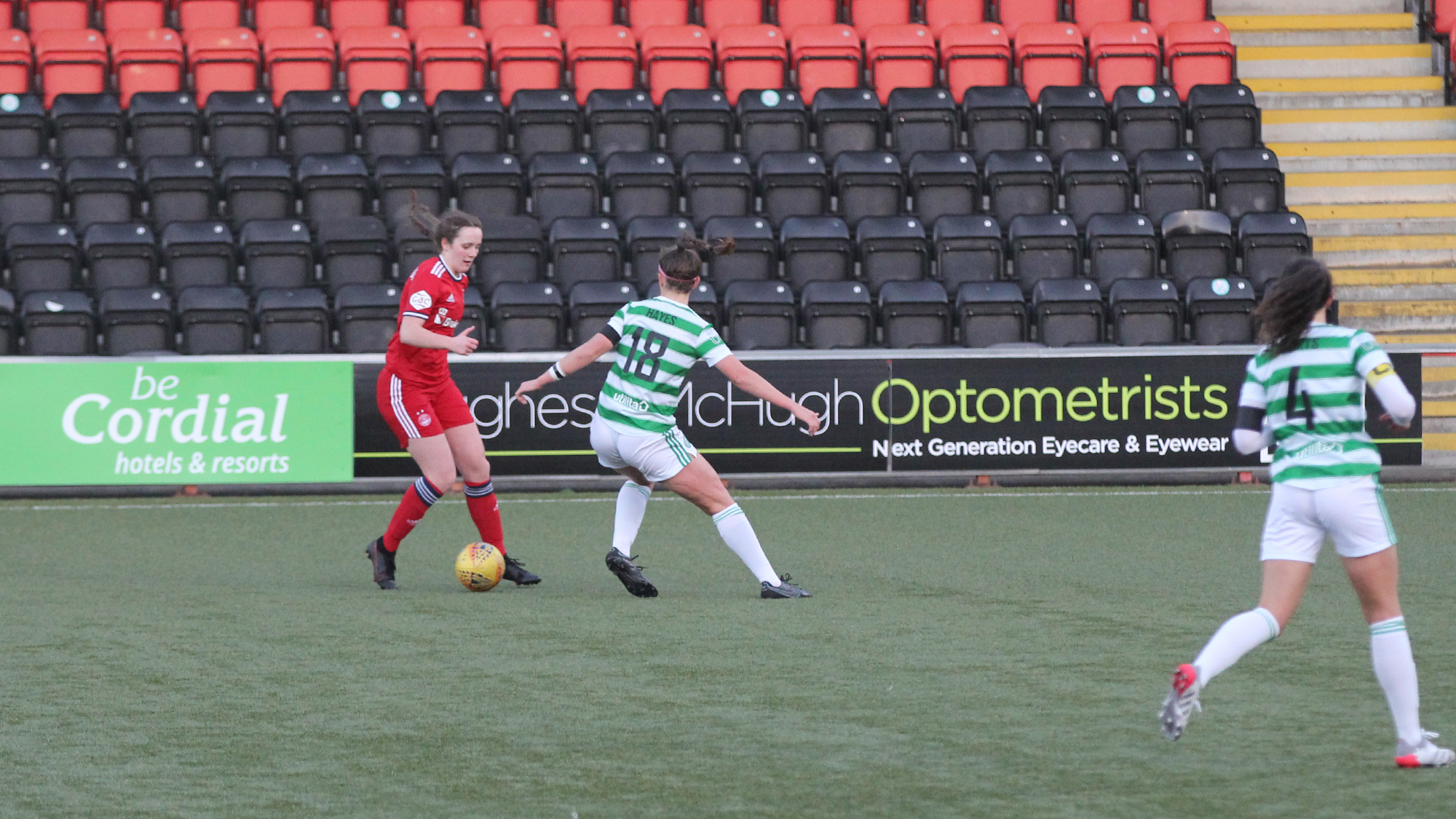 The home side grabbed a third in the final minute as Tyler Toland’s cross from the left found the head of SHORTS who nodded the ball into the net. It was harsh on the visitors who looked for so long like they were going to take all three points and the 3‐1 score line wasn’t what the visitors deserved for their efforts.

Bailley COLLINS: “We gave everything in the first half and went in with the lead and our heads held high. We grew in confidence as the game went on and they were forced to make some changes to give them more energy. They got the equaliser and as the minutes wore on, we were under pressure but still wanted to go forward to score ourselves. It was a hard‐fought performance and it’s frustrating because we’ve been working so hard in training, and we looked like getting something from the game but it just didn’t go our way”.

Gavin BEITH: “It’s really disappointing because the game panned out as we thought it would. We combatted their threat well and we always knew we would get a chance and we took that when it came. I think we looked fairly comfortable for the vast majority of the game, we had to defend but we did that well. As the game goes on players get tired and that impacts decision making and you also need a bit of luck as well which never went our way. It was a fantastic performance with loads of positives and although it’s another defeat, you have to look at the bigger picture and if we perform like that every week, we’ll win more than we lose”.