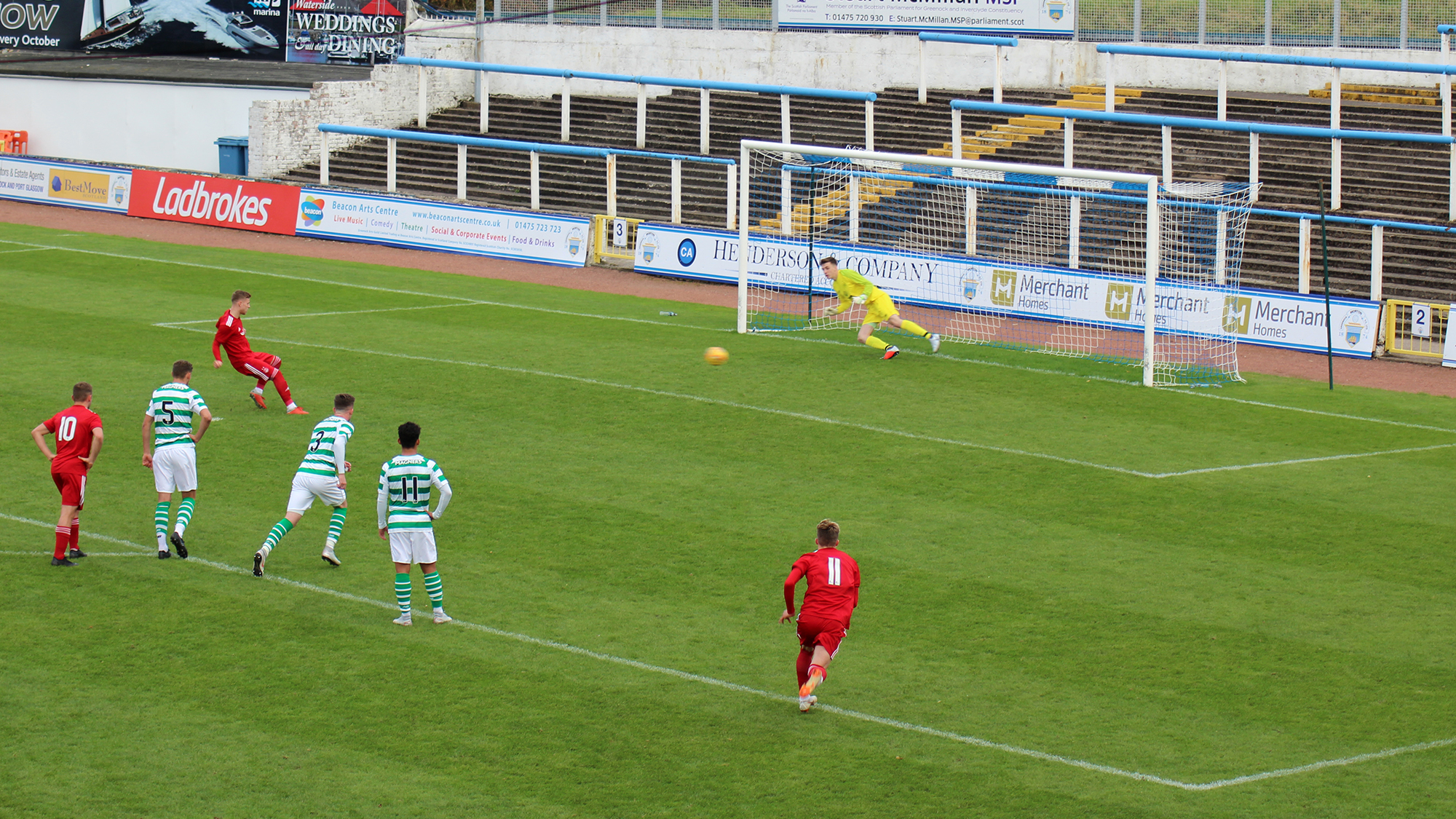 Just over a fortnight after playing Celtic in the Reserve League, the Young Dons returned to Cappielow to face the Hoops in a Reserve Cup clash. After successive league setbacks Paul Sheerin’s side looked to bounce back to winning ways, knowing they had matched their opponents for much of their previous meeting.

The Dons lined up with David Craddock in goal, behind a back four of Miko Virtanen, Jordan McGregor, Sam Roscoe and Jack MacKenzie. Skipper Dean Campbell and Morgan Brown anchored the midfield with Connor McLennan and Ethan Ross on the flanks supporting front men Seb Ross and Bruce Anderson.

The Dons fashioned the first chance in the fourth minute, McLennan crossing for Anderson who couldn’t keep his shot down after being picked out at the far post. A Campbell free-kick from the right led to an incredible stramash in front of the Celtic goal, several efforts being knocked off the line before the danger was eventually cleared.
It had been a strong, positive start from the visitors as the home side struggled to get any sort of foothold in the match.

The powerful running of McLennan was proving problematic for the Celtic rearguard, but the home side were a danger on the break with Arzani and Johnston having plenty of pace on the flanks. Indeed, Johnston had the ball in the Aberdeen net on 20 minutes, but an offside flag cut the celebrations short. It looked like a borderline decision but no-one in red was arguing.

Craddock produced an excellent save to deny Ralston on 25 minutes after the full back broke into the box, the keeper’s first serious piece of action. Dean Campbell was booked on the half hour mark for trying to pull down Johnston as he instigated a swift attack which ended in Craddock diving bravely amongst bodies to clutch a Ralston cross.

Benyu Kundai was cautioned three minutes later for a foul on Seb Ross, Anderson’s attempt from the set-piece being blocked by the Hoops’ wall.
The game was becoming rather fragmented as referee King blew for the slightest of infringements disrupting the flow of what was a very competitive game.

A flashpoint then occurred in the 40th minute as Kundai was ordered off for a petulant kick at McLennan – a moment of total folly from the former Ipswich midfielder, particularly after being booked only minutes earlier. Three minutes later Celtic won a free-kick on the edge of the box, but, like Anderson earlier, the Hoops winger couldn’t beat the defensive wall with his shot.

Arzani was the next name in the book after a late tackle on MacKenzie just on the half-time whistle. A keenly fought first half but no goals as yet although both sides have had chances and the Dons will try to make the most of their man advantage in the second period.

Aberdeen enjoyed the bulk of the early second half possession as Celtic left Oko-flex on his own up front with two banks of four behind the striker.
Morgan Brown was enjoying his best game in a red shirt breaking up Celtic attacks and using the ball well as the Dons moved forward and from one of his passes into space a cross-cum-shot from Virtanen clipped the bar with Mullen back-pedalling.

Jordan McGregor picked up a yellow card after a challenge on Oko-flex in the 58th minute just before Aberdeen were awarded a spot-kick after Church bundled Anderson over in the box. The striker dusted himself down before sending Mullen the wrong way to make it 1-0.

A foul by Virtanen on Arzani saw him become the game’s fifth booking as tempers started to get a little bit frayed – cool heads were going to be needed. Shortly after McInroy also saw yellow.

Coffey came on for Arzani on 67 minutes as Celtic coach Tommy McIntyre sought a route back into the game. Aberdeen were controlling the game, but the insurance policy of a second goal would have been welcomed.

David Dangana replaced Seb Ross for the last 18 minutes of the 90, the attacker on loan at Stenhousemuir having given his all for the Aberdeen cause. Full back Ralston was then booked for a foul on McLennan, the resultant free kick finding Virtanen whose powerful header was brilliantly tipped over by Mullen.

On 79 minutes the Dons made a double switch, Virtanen and Ethan Ross being replaced by Harrington and Antoniazzi. The crime count continued to rise as Brown was booked for a challenge on Johnston swiftly followed by substitute Coffey after a foul on MacKenzie. Savoury replaced Deas then Sam Roscoe earned the wrath of the ref as he was yellow carded.

A card count of ten yellows and one red suggests a bloodbath, but it had simply been a very competitive tussle.

A fine header from Welsh saw Craddock save superbly as the home side mounted a late onslaught, a magnificent stop from the Irishman who had largely been a spectator in the second period.

McLennan curled a shot just past as the Dons kept play in the Celtic half as the clock ran down, Aberdeen deserving their victory and giving themselves a good chance to progress in the tournament. Falkirk and Ross County are our next opponents in the competition. 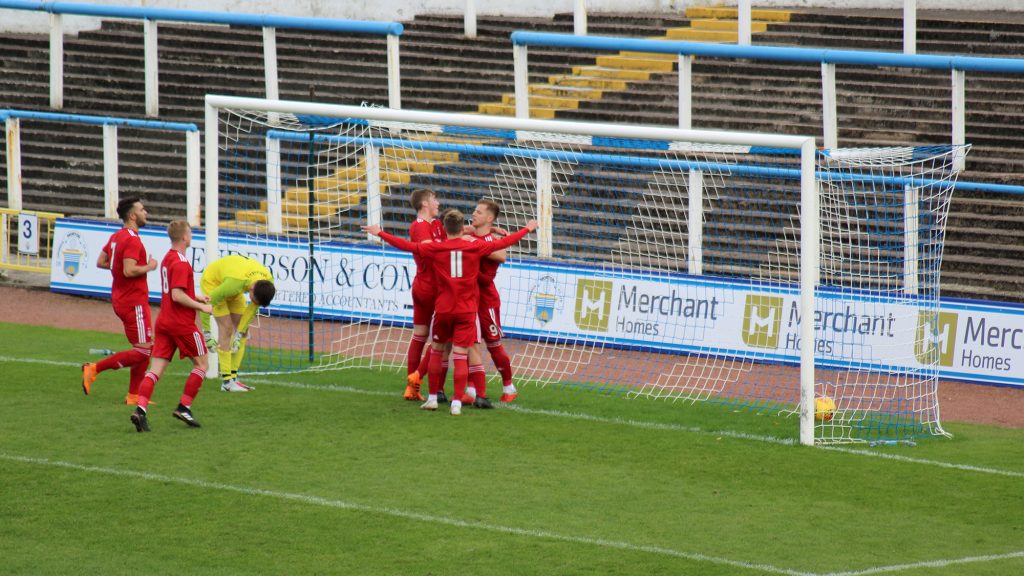