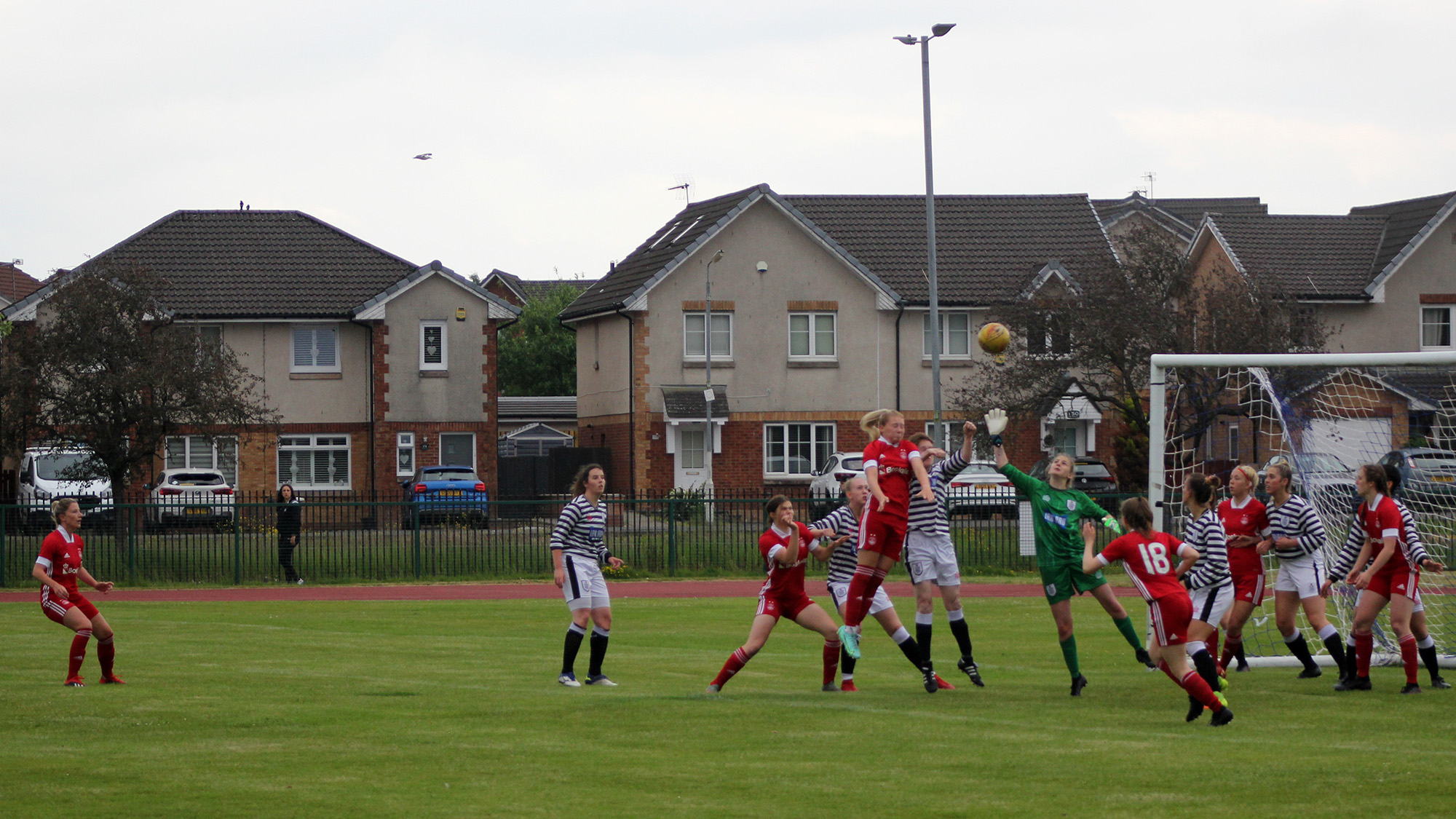 Aberdeen maintained their lead at the top of SWPL2 with a hard fought 3-0 victory of Queens Park at Nethercraigs. Francesca Ogilvie’s second half hat-trick, including two penalties, gave the Dons three points on the road after a battling encounter.

Dons’ co-manager Emma Hunter named an unchanged side from the team that beat Stirling University 7-0 at Cormack Park on Sunday.

The home side had the first chance of match as a low ball across the face of the Aberdeen goal was turned wide at the back post. The visitors responded as Bayley Hutchison cut in from the left and had a shot straight at Rachael Caddell in the Queens goal.

Chloe Gover and Francesca Ogilvie then both had efforts from distance as the visitors looked the more likely side to break the deadlock.

Gover again went close after pouncing on a loose ball in the middle of the park but her curling shot flew just wide.

The Spiders were always looking to counter on the visitors and a long free kick into the area looked to cause problems as the half drew to a close but Loren Campbell did well to get round on the cover and clear the danger.

The best chance of the half fell to the league leaders right on the half time whistle. Hutchison gathered a throw in with her back to goal and set the ball back for Eva Thomson who smashed her shot just over the cross bar.

The hosts had the ball in the net in the opening minutes of the second half but the linesman saved the Dons as he correctly flagged for offside.

Aberdeen moved some personnel around after Lauren Gordon was introduced just before the hour and the striker almost had an immediate impact when her low shot was saved at the second attempt by Caddell.

Gover almost gave the visitors the lead when she brought a great save out of Caddell with a shot from the edge of the box. The goal was coming though and the deadlock was finally broken after 64 minutes.

OGILVIE gathered the ball around thirty yards and turned inside before curling a superb strike into the top corner of the Queens net.

The goal settled the visitors and they started to play their best football of the match and Thomson almost scored a second after a powerful run out of midfield culminated and a low shot which was well saved by the goalkeeper.

Hutchison and Gordon then both went close as a scramble in the hosts six-yard box saw both strikers have shots blocked from close range.

The Dons finally settled the match on 81 minutes and the goal came from the penalty spot.

Substitute Johan Fraser collected the ball on the left and made her way into the penalty area, her quick turn bamboozled the Queens defender who brought down the Dons winger for a clear spot kick. OGILVIE stepped up from the spot and smashed her second of the game into the top corner.

It was 3-0 just minutes later as the visitors were awarded a second penalty. Gordon chased down a rebound in the box and pulled down leaving the referee no option but to point to the spot again. OGILVIE again stepped and emphatically smashed home for her hat-trick, taking her tally for the season to 11 and giving her side all three points. 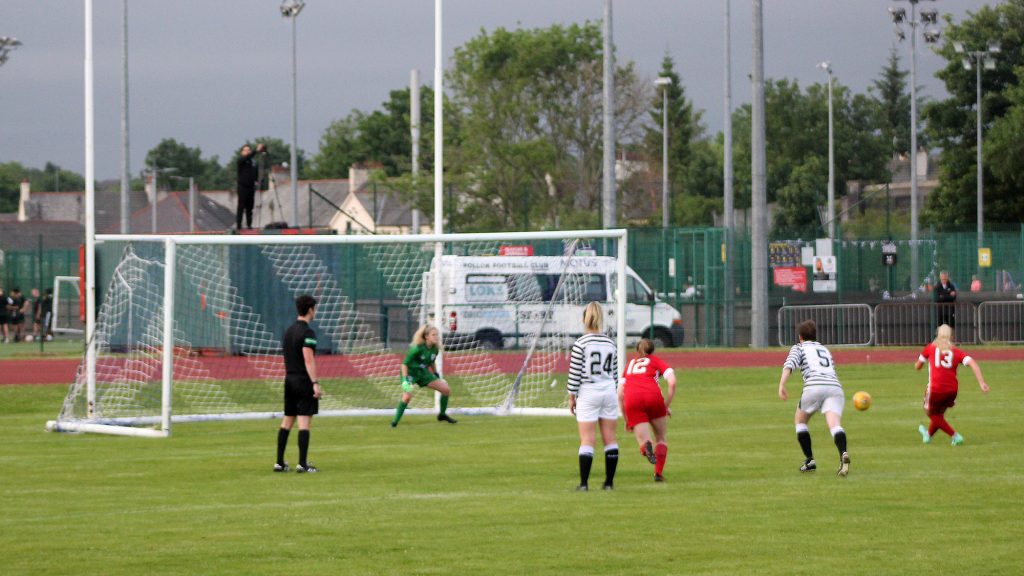 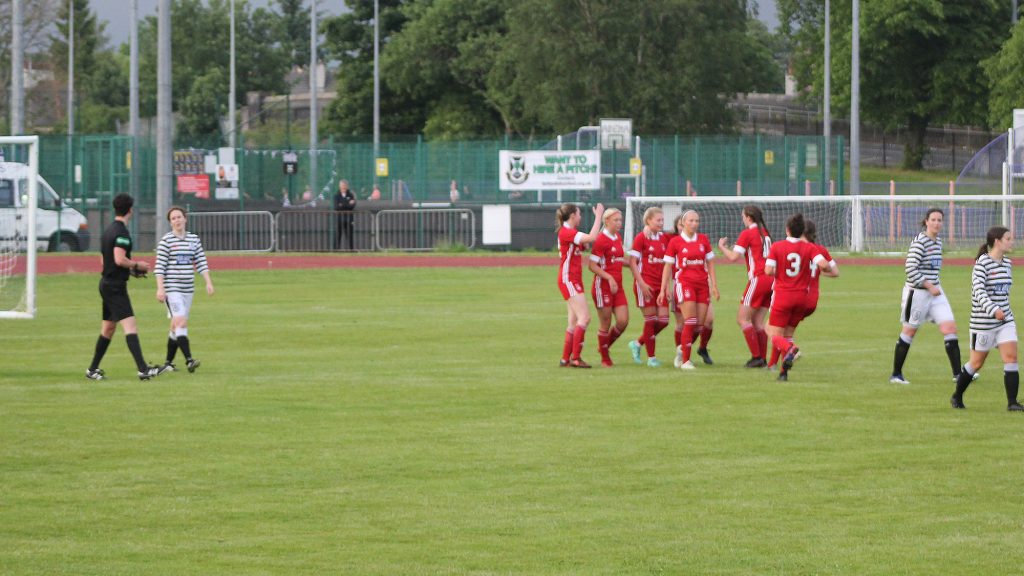 Johan FRASER: “I think we kept the ball well tonight but we struggled to penetrate. It was a grass pitch and were not used to playing on that surface but I thought we coped well and we opened them up in the second so it’s a good three points away from home. I think we dealt with them defensively but struggle to break them down a bit but we always felt a goal was coming. It’s good to come on a win the penalty and I always try to come on a do my best and make an impact on the game”.

Jessica BROADRICK: “I think we struggled a bit in the first half, we made a lot of chances but I think we were forcing it a little bit, we knew more chances were going to come and we just had to relax and keep going. I think we defended really well and didn’t really concede a shot a goal so I think defensively we did our job. It was quite hard to build from the back but once we got settled I think we did that well and we’re happy to get the win”.