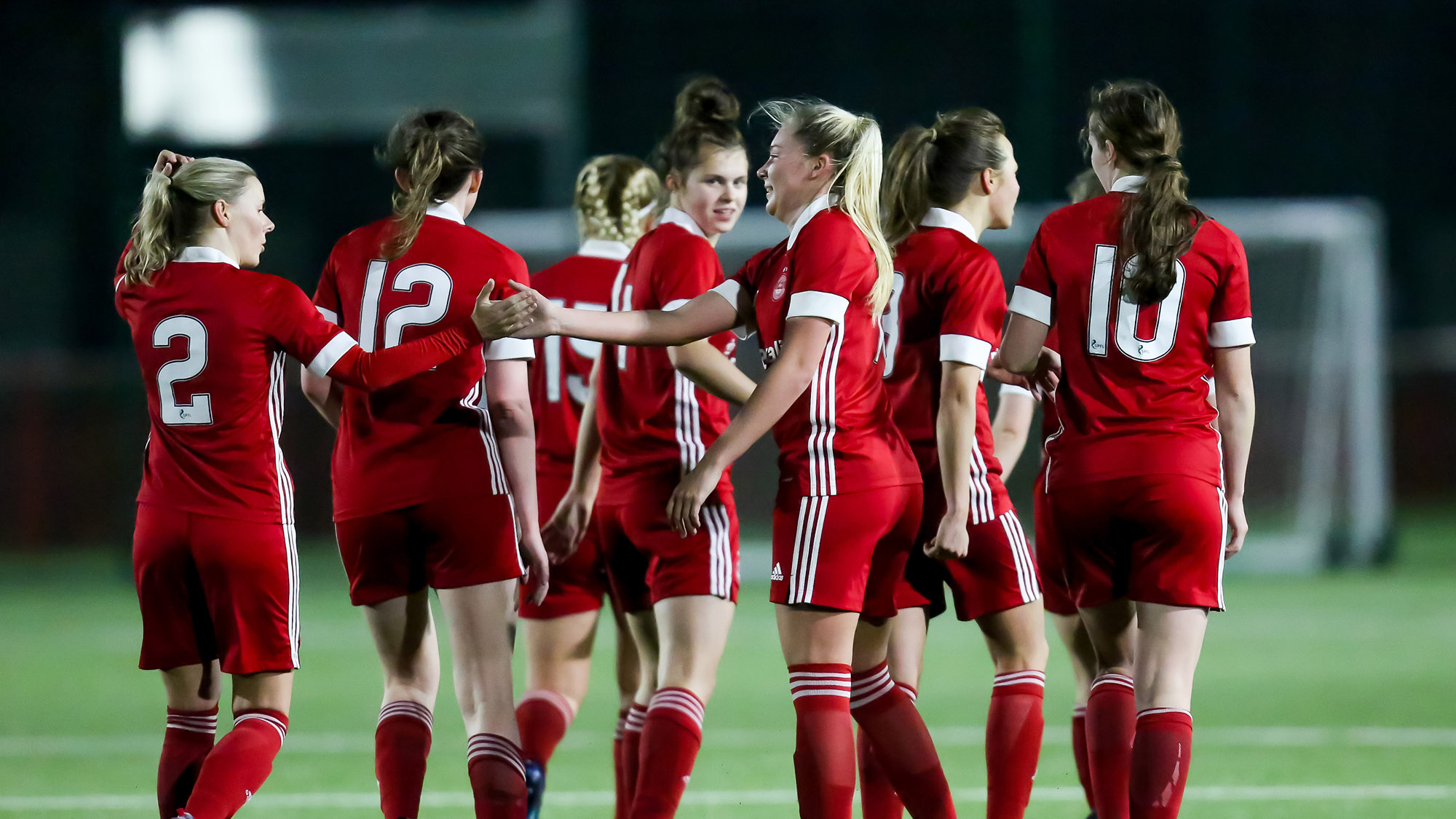 Aberdeen put in a clinical second half performance to see off St Johnstone 8-1 to maintain their lead at the top of SWPL2.

They have now scored 27 goals in five games.

The Dons were forced into a couple of changes after Sunday’s game against Glasgow Women. Injuries picked up in that win ruled out Jenna Penman and Amy Strath with Jessica Broadrick and Johan Fraser coming into the starting line-up.

The visitors had the games first attempt at goal through Morgan Steedman who saw her early shot from range held easily by Gail Gilmour. The Dons then had their first attempt on 6 minutes as Chloe Gover’s cross found Johan Fraser at the back post but her shot went over the bar.

The away side started the brighter of the two teams with a flurry of early corners and could’ve had a penalty after Kelly Forrest tackled Ellie Cowie strongly in the area. Despite the Saints positive start, it was the home side that opened the scoring.

There were 15 minutes on the clock when Bayley Hutchison went down the right and her low cross found GOVER who forced the ball over the line from close range for her first goal of the season.

Loren Campbell then tested St Johnstone keeper Cameron with a low free kick which was claimed at second attempt by the goalie. Steedman had the ball in the net at the other end but flag went up for offside to rule out her effort.

The Dons doubled their lead on 30 minutes courtesy of a fine strike. Francesca OGILVIE stepped on to a cross field pass and fired a superb left foot drive into the top corner for 2-0. The hosts had chances for a third before the interval with Bailley Collins and Bayley Hutchison both having chances but they had to settle for a two-goal lead at the break. 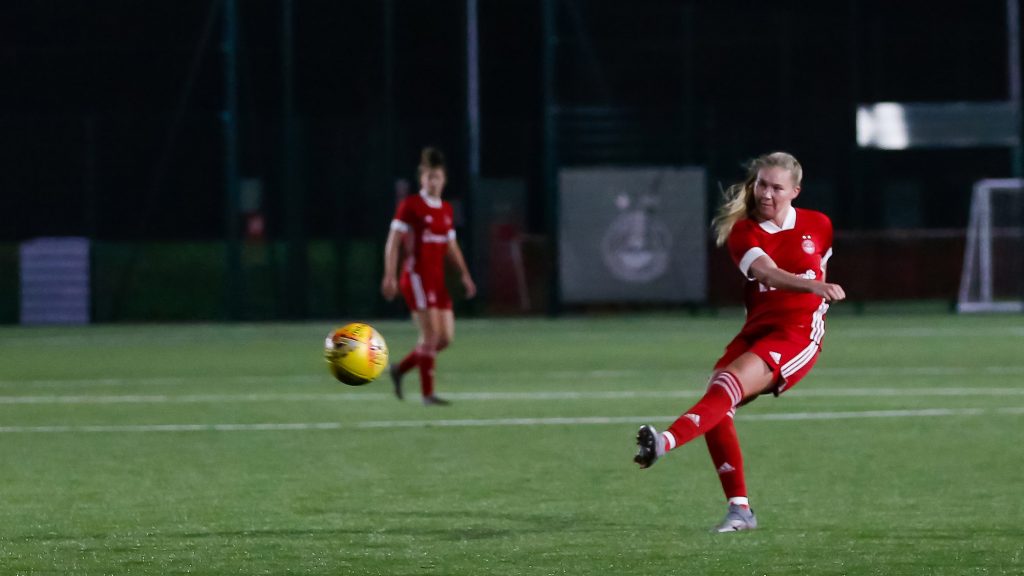 The visitors had the first attempt of the second half, a speculative shot by Rebecca McGowan going high and wide of the target. At the other end Jessica Broadrick headed a Gover corner wide whilst Gover herself then fired over the bar from 8 yards out.

The Saints got themselves back in the game after 58 minutes courtesy of a penalty which was emphatically converted by Rachel TODD. The goal gave the visitors hope but it didn’t last long as just two minutes later a great finish by COLLINS finished off a quick passing move to regain the Dons two-goal advantage on 60 minutes.

Steedman looked to respond for Saints but Gilmour was quick of her line to smother at the feet of the forward. The Dons then put the game beyond their visitors in the 64th minute. A great run down left by Ogilvie saw her evade two tackles before playing in HUTCHISON who finished in the corner for 4-1.

It could have been five just two minutes later but Gover drew a great save from goalkeeper Cameron. The Reds didn’t have long to wait though as they scored another great goal on 67 minutes. Campbell was fouled right on the edge of the St Johnstone penalty area and GOVER stepped up to whip the free-kick in off the underside of the crossbar.
Goal number six came in the 71st minute as the hosts made it four goals in eleven minutes. A great flick over her own head by HUTCHISON put her through on goal and she expertly rounded the keeper and knocked home for 6-1.

Young Dons substitutes Nadia Sopel and Hannah Innes were given their debuts off the bench in the latter stages. The seventh goal then came with ten minutes remaining as COLLINS got her second of the match with a deflected shot from the edge of the box followed good play be Campbell, Sopel and Gover.

Eva THOMSON rounded off the scoring with her team’s eighth goal of the night as her shot from distance bounced into the net in the final minute to end a ruthless performance from the league leaders. 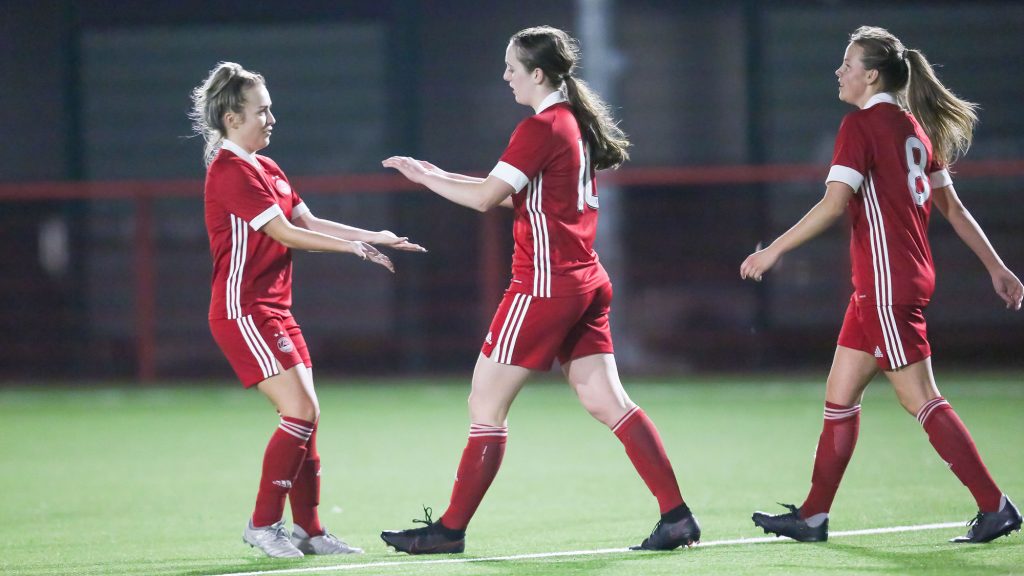 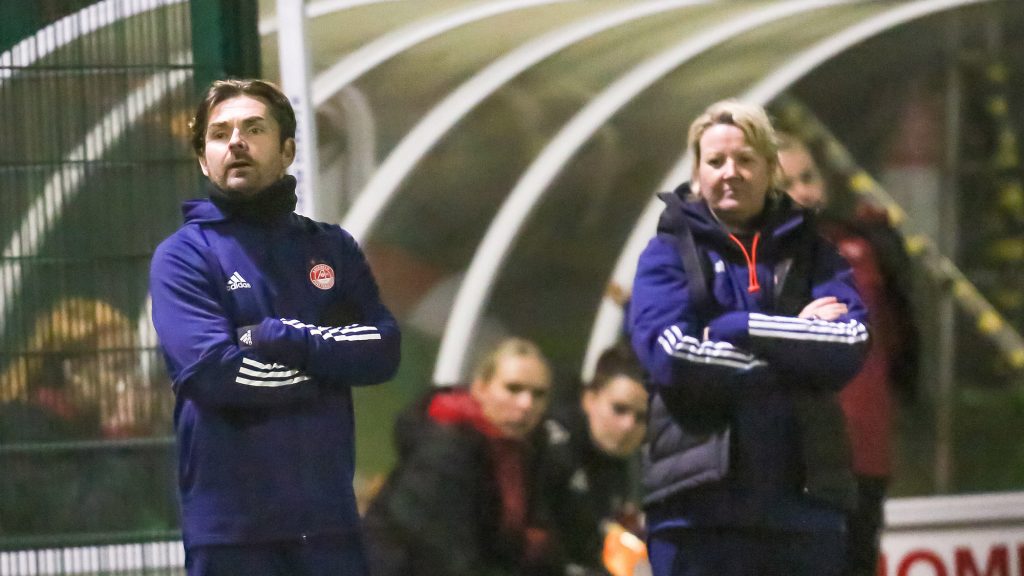 “I’m absolutely delighted with the scoreline but more importantly the performance.

“I felt we didn’t play the way we normally play at the weekend so today was about getting back to our style and playing the way we want to play.

“I think the second half in particular, we punished them and once a few goals go in this team just grow in confidence from it. We’ve got the depth of squad that we can bring players in that can make a difference for us. Credit to St Johnstone because in that first half the worked so hard and I wasn’t sure if they could maintain it as they were pressing so aggressively and working so hard.

“I guess if there is any silver lining to injuries its that you can take in these young players (Nadia Sopel and Hannah Innes) and we know they have the ability and we’ve been keeping an eye on them and they both came in and did a great job.

“It’s so satisfying to know we’ve got that chain of young players that can step up”.

Please be advised of the following confirmed match details: 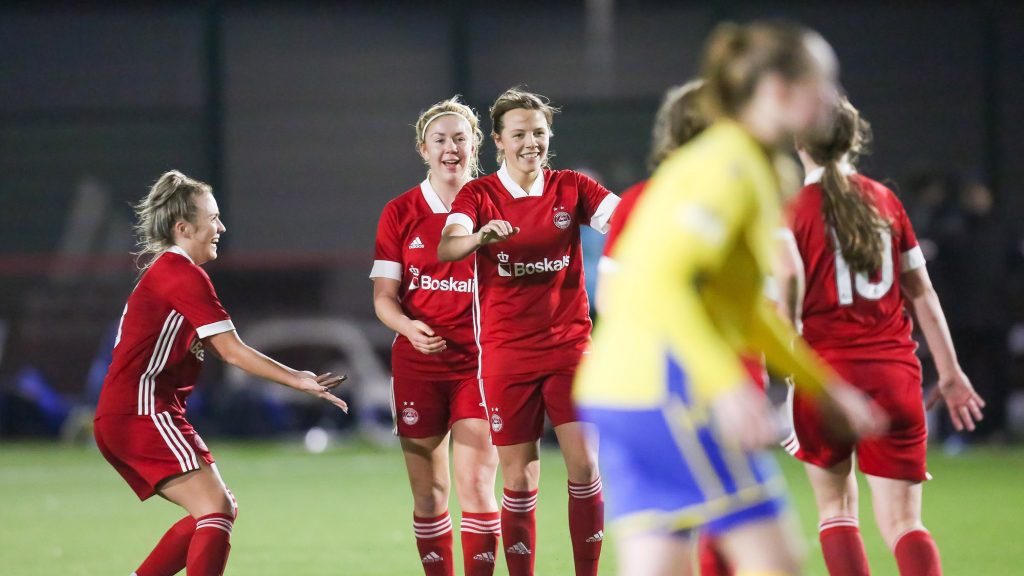