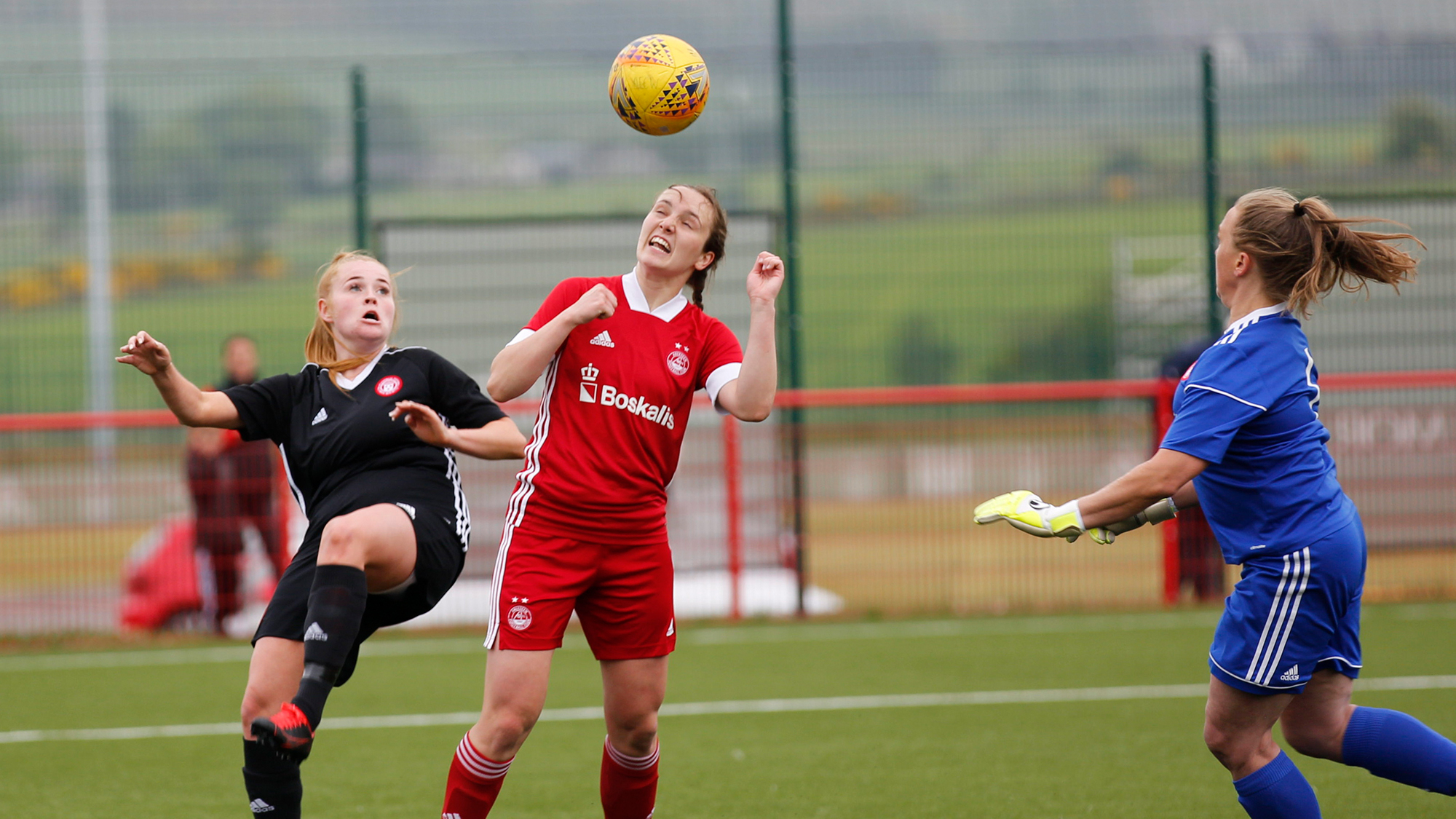 Share this article:
Aberdeen Women 1-2 Hamilton Accies WFC
Aberdeen hit a rare bump in the road in their pursuit of promotion as they fell to a 2-1 defeat to Hamilton Accies at a rainy Cormack Park. The result means the Dons lead at the top is cut to just three points whilst they still have a game in hand over their three title challengers – Hamilton, Partick Thistle and Dundee United.

There were a couple of changes to the starting line-up from the side that defeated St Johnstone in midweek. Gail Gilmour returned in goals whilst Amy Strath replaced Jenna Penman in the back four. The visitors arrived on the back of a 4-2 midweek victory over fellow title-chasers Partick Thistle.

It was the team in red that had the first attempt of the match after three minutes as Jessica Broadrick’s long range effort was tipped over by Sarah Rhind in the Accies goal. Just minutes later a good move involving Eilidh Shore and Francesca Ogilvie culminated in Broadrick’s cross from the left narrowly evading Bayley Hutchison at the back post.

The visitors then had their first foray into the Aberdeen area which resulted in Aberdeen keeper Gilmour picking up a knock after a collision in the six-yard box. The goalie managed to carry on but her next task was to pick the ball out of the net.

The Dons defence failed to clear after an attack down the Hamilton right in and the ball fell to Marie GARDINER in the penalty area who fired home from close range to put Accies in front after 14 minutes.

An equaliser almost arrived immediately as the league leaders were forced to come from behind for the second game running. A great ball from Chloe Gover on the left was met by the head of Hutchison but her goal-bound effort was cleared off the line.

Chances were at a premium as the half wore on and much of the game was played out in the middle third of the pitch. Hutchison had an effort easily picked up by Rhind whilst Gilmour dealt similarly with a Gardiner effort after good hold-up play by Kathleen McGovern.

With just minutes remaining before the interval Aberdeen almost equalised through captain Kelly Forrest. The defender met Gover’s corner from the left with a powerful header which Rhind did well to collect at the second attempt. 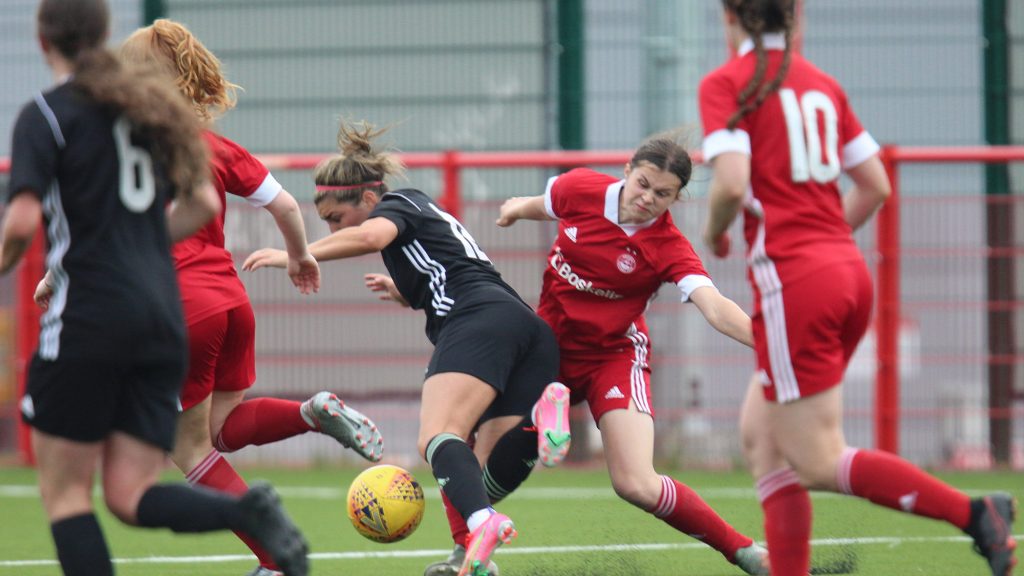 Aberdeen changed things up at half time as Lauren Gordon entered the game and the hosts started the second period with a spell of dominance. That early possession almost brought them level after 54 minutes. A strong run forward by Loren Campbell saw her feed Shore in the centre of the park, Shore then slid a perfect pass through to Hutchison and the young striker’s powerful shot went just over the bar.
Accies always looked capable of causing problems on the break and Keeva Keenan’s dangerous cross on 56 minutes needed a good defensive header by Forrest to clear. Keenan could’ve double her side’s lead herself two minutes later as Gilmour did well to tip the defender’s long-range effort over for a corner.

The woodwork then prevented the Dons from getting back on level terms on the hour mark. Broadrick fired in another effort from distance which was parried wide by Rhind. The resulting corner was dangerously swung in by Gover and it somehow evaded everyone before hitting the back post and being cleared from danger.

It proved to be a turning point as hosts found themselves 2-0 down on 66 minutes. MCGOVERN looked be isolated as she picked up possession forty yards from goal but after controlling the pass the striker curled a magnificent effort over Gilmour and into the top corner of the net.

Aberdeen rallied as they looked to find a way back into the game but they struggled to break through the visitors’ defence as they fought to hold on to their lead. McGovern then brought out a great save from Gilmour as she hit a low free-kick around the wall from 20-yards.
A goal finally came for the home side with ten minutes remaining and it did so in spectacular fashion. BROADRICK carried the ball from half-way before unleashing a stunning drive into the top left-hand corner of net to deservedly reduce the arrears.

The hosts had all the ball as they tried to grab a late equaliser but they couldn’t break down the Accies rear-guard as the Dons went down to just their second defeat of the season. 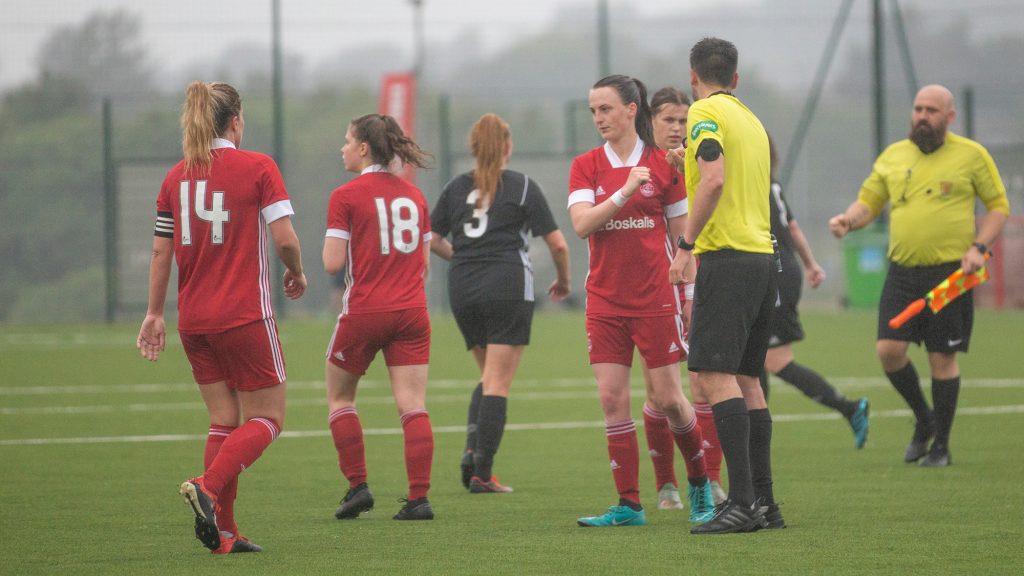 Lauren GORDON: “I thought we controlled the game but the final product wasn’t there today and we couldn’t create enough chances. We made it hard for ourselves at times and Hamilton made it difficult for us so it was a battle the whole game and we’re obviously disappointed with the result. I think Hamilton deserve to be up at the top of the league with us, they always make it had for us and they’ve got a good bunch of players there. The pressure was on them today to stay in the race for promotion, we’ve still got a bit of a lead at the top and we’re still in control”.

Jessica BROADRICK: “I think it was decent performance, it was really competitive and that’s what you want. We didn’t get the result that we wanted but we’ll take a lot of things from it, we did some really good things and we’ll take that into the next game and we’ll go away and work on the things that didn’t go so well. I think going forward we had a lot of the ball and it’s just abut putting the ball away when we create those chances”. 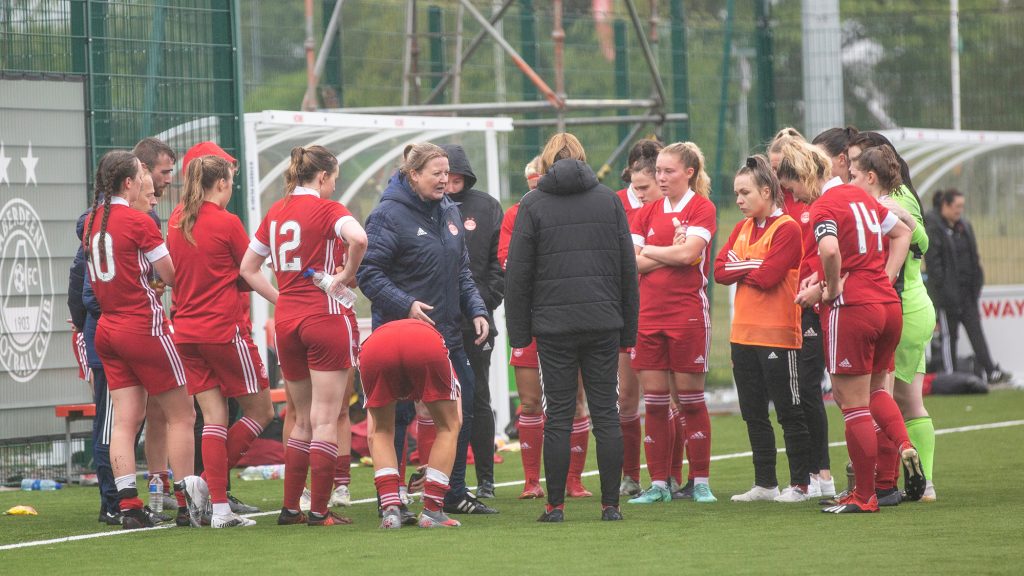