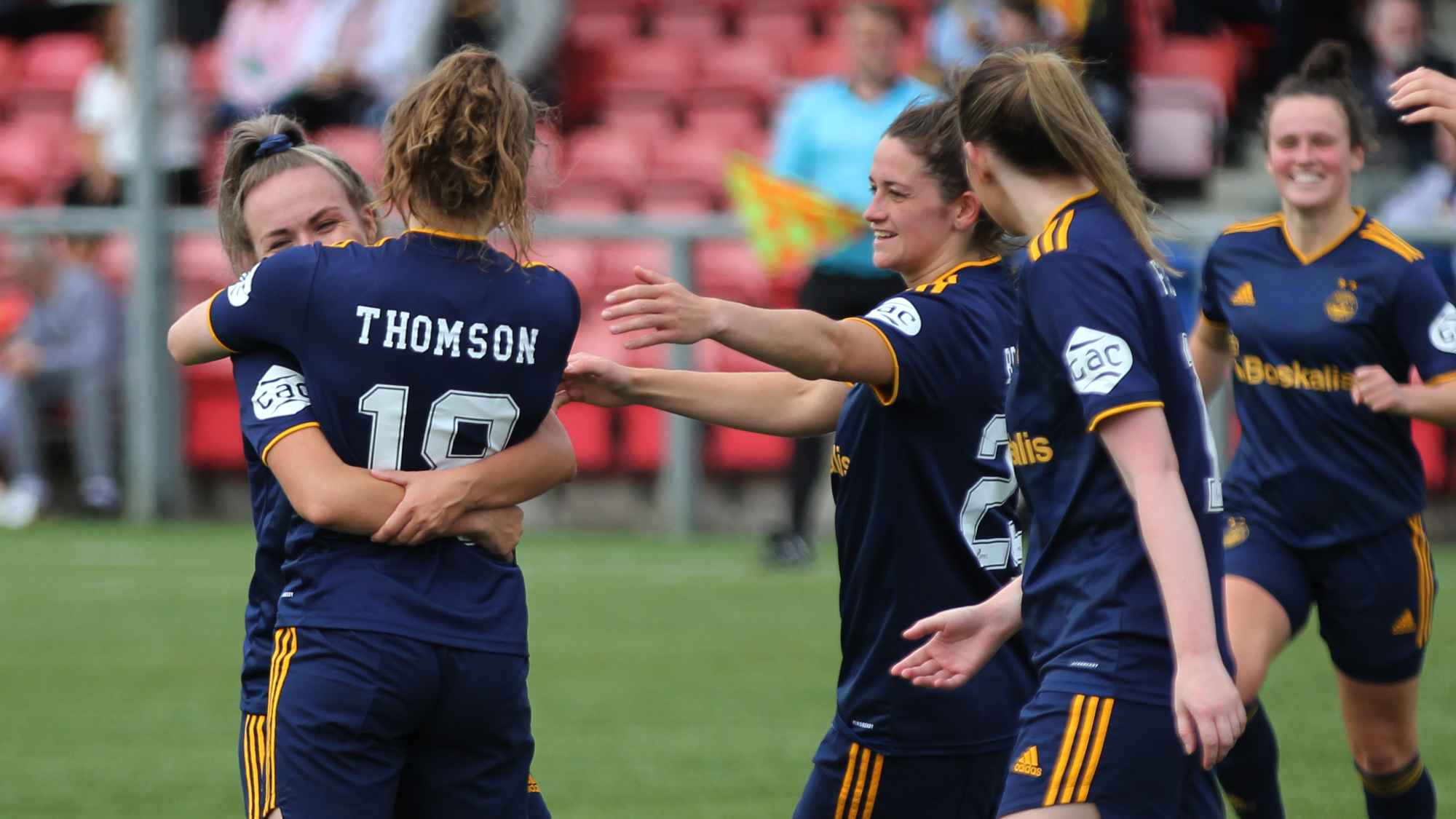 Aberdeen got their first SWPL1 points on the board as they fought their way to a 2-0 victory over Partick Thistle at Petershill. Second half goals from Eva Thomson and Mya Christie sealed the three points for the Dons as they recorded their first league win of the season.

Emma Hunter and Gavin Beith made three changes to the side that lost to Celtic last week. Lauren Gordon missed out and joined Kelly Forrest, Amy Strath and Bayley Hutchison on the injury list whilst Chloe Gover and Bailley Collins moved on to the bench. Natasha Bruce replaced Collins in midfield, Johan Fraser took Gover’s place out wide and Louise Brown started up front. There was also first appearances in the squad for goalkeeper Annalisa McCann and winger Mya Christie as they stepped up from the Aberdeen Ladies under-19s.

The visitors had the bulk of the early possession as they looked to take control of the match from the out-set. The Dons couldn’t create anything clear-cut in the opening stages though as Francesca Ogilvie’s 30 yard free-kick sailed over the bar. 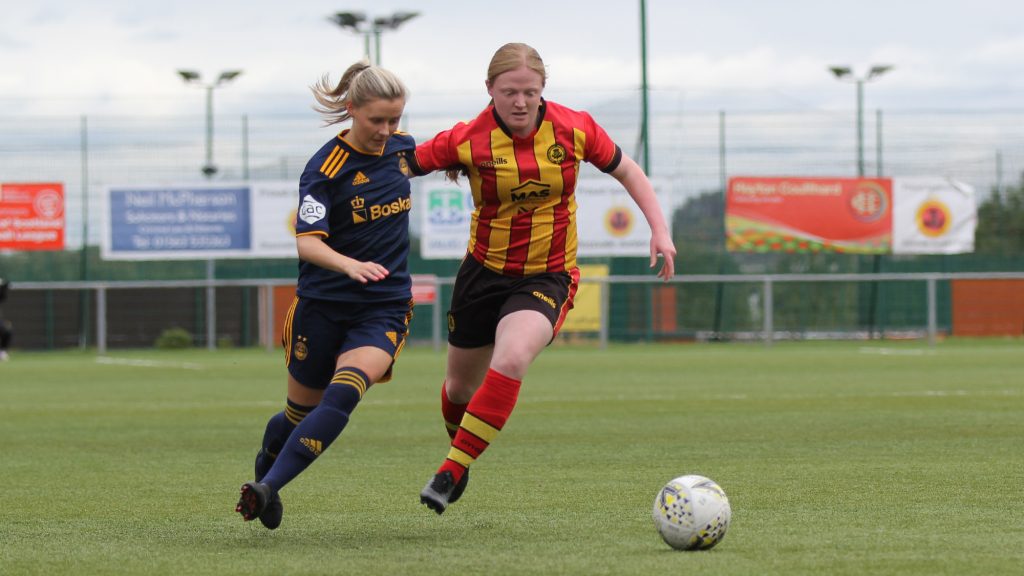 At the other end the home side looked to sit back and hit on the break and had their first sight of goal just before the quarter-of-an-hour mark when MacDonald’s shot was deflected wide after she had been set up by London Pollard.

Good work down the left side sent Ogilvie free but her cross was just too high for Johan Fraser as she arrived in the box. The goalmouth chances were few and far between as the game became a scrappy affair littered with fouls.

Thistle’s best chance of the half came just before the half-hour mark. Pollard’s cross into the box almost found McBrearty who was seen off by a combination of Donna Paterson and Loren Campbell. The ball broke out to the edge of the box where Slater was waiting but she couldn’t keep her strike under the crossbar. 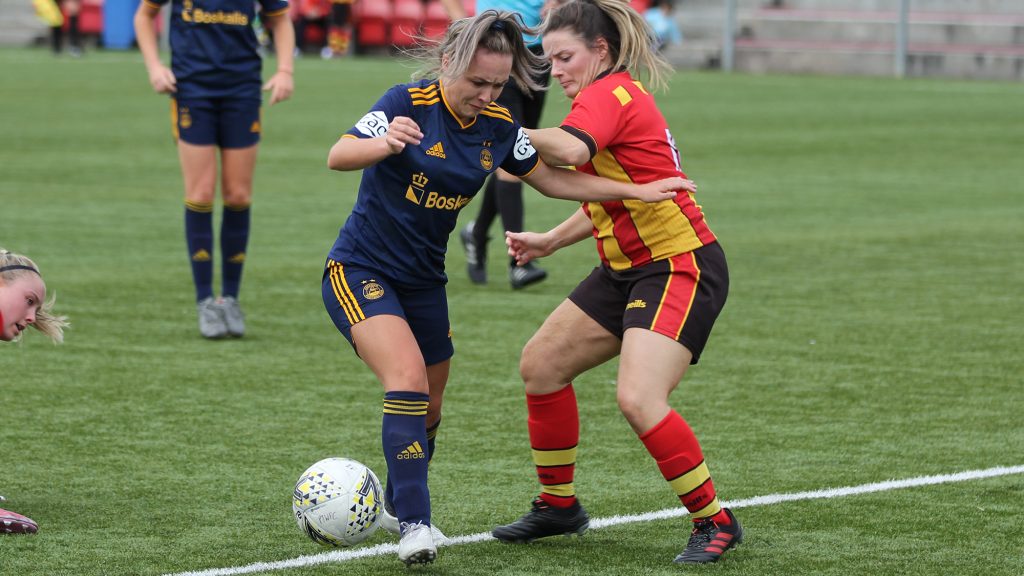 It was the Dons who were looking more likely to break the deadlock as the half wore on, Eilidh Shore nearly got on the end of a great Natasha Bruce through-ball but McGregor rushed off her line to clear with her feet.

A good pass out of defence by Jess Broadrick released Ogilvie down the Thistle left, the Dons’ wide player carried the ball into the area and just as she was about to pull the trigger McCulloch slid in to block the ball away and send the sides into the changing rooms level at the interval.

The second half was no less scrappy than the first although there was an increase in chances, Louise Brown set the tone for that as she curled a shot wide within minutes of the restart. Thistle had a chance themselves a minute later as McBrearty picked up a short kick out by Gail Gilmour but her attempted 40-yard lob went well wide of the target.

Despite that half-chance the visitors always looked more likely to score and so it proved after 53-minutes. Ogilvie’s square pass across the 18-yard line found Fraser who neatly nudged the ball into the path of Eva THOMSON who fired the ball home from just inside the box. 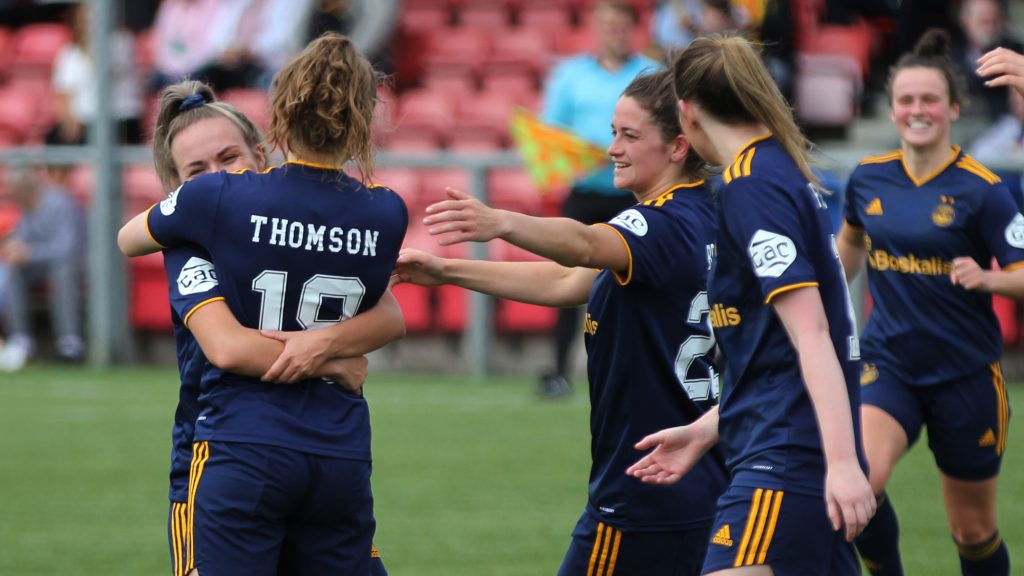 The Jags looked to respond immediately through McBrearty but her 25-yard effort flew over Gilmour’s goal. That initial response from the hosts didn’t last long as the SWPL2 champions went in search of a second goal. Fraser headed wide at the back post from an Ogilvie corner when she really should have hit the target.

Fraser was again involved a few minutes later as she did well to win the ball on the right and feed Thomson. The midfielder’s ball into the box fell to the on-running Bruce who saw her goal-bound effort blocked by a Thistle defender.

Aberdeen made a double change with twenty minutes remaining as Chloe Gover and Bailley Collins replaced Brown and Fraser. Gover’s involvement lasted less than five minutes though as she was forced off after a nasty collision of heads and was replaced by Mya Christie who came on to make her debut. 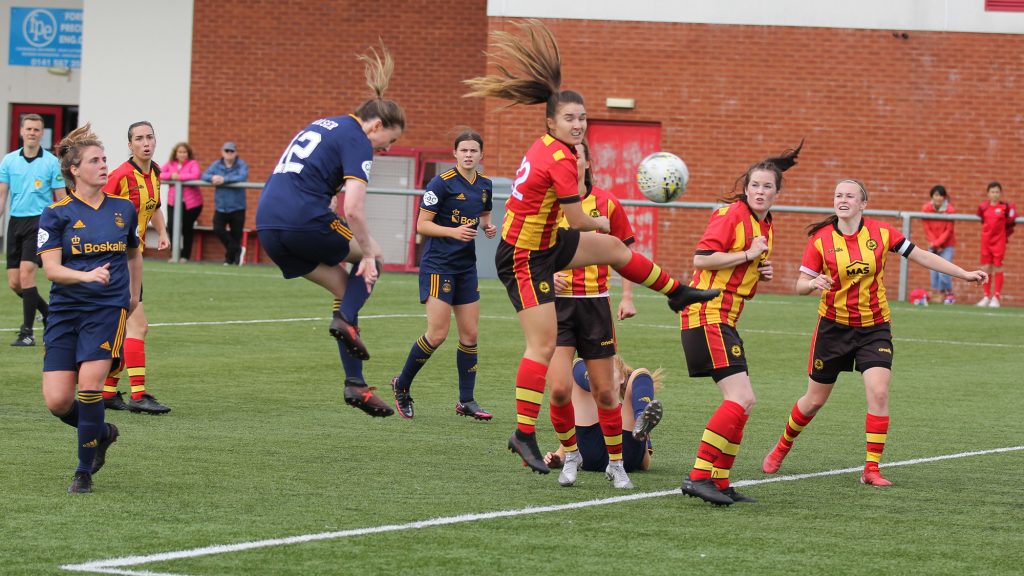 The hosts best chance of finding a way back into the match was through Celtic loanee Pollard but the central defensive partnership of Paterson and Broadrick did well to keep her at bay for the most part. When Pollard did break through on goal inside the final twenty minutes a combination of Paterson and the out-rushing Gilmour did well to halt her run before she could shoot.

Thistle missed their best chance of the match with ten minutes remaining. Jade Greenshields, who came on as a trialist substitute passed up a great opportunity when she shot wide from six yards out after being set up by MacDonald.

It wasn’t to be though as the Dons sealed a deserved victory deep into stoppage time. Thistle had already had a warning about the pace of Christie a few moments earlier when they had McGregor to thank for saving at the feet of the substitute. They didn’t heed that warning though as Thomson sent CHRISTIE through on goal again and there was nothing the keeper could do as the debutant sent a composed finished into the back of the net with virtually the last kick of the game. 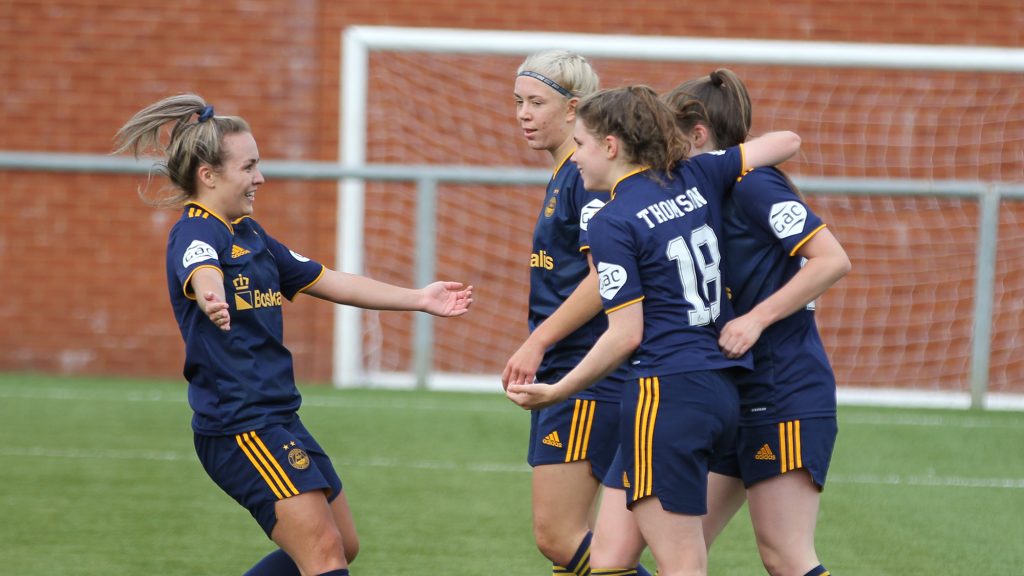