Young Dons put in superb second half performance at Cappielow 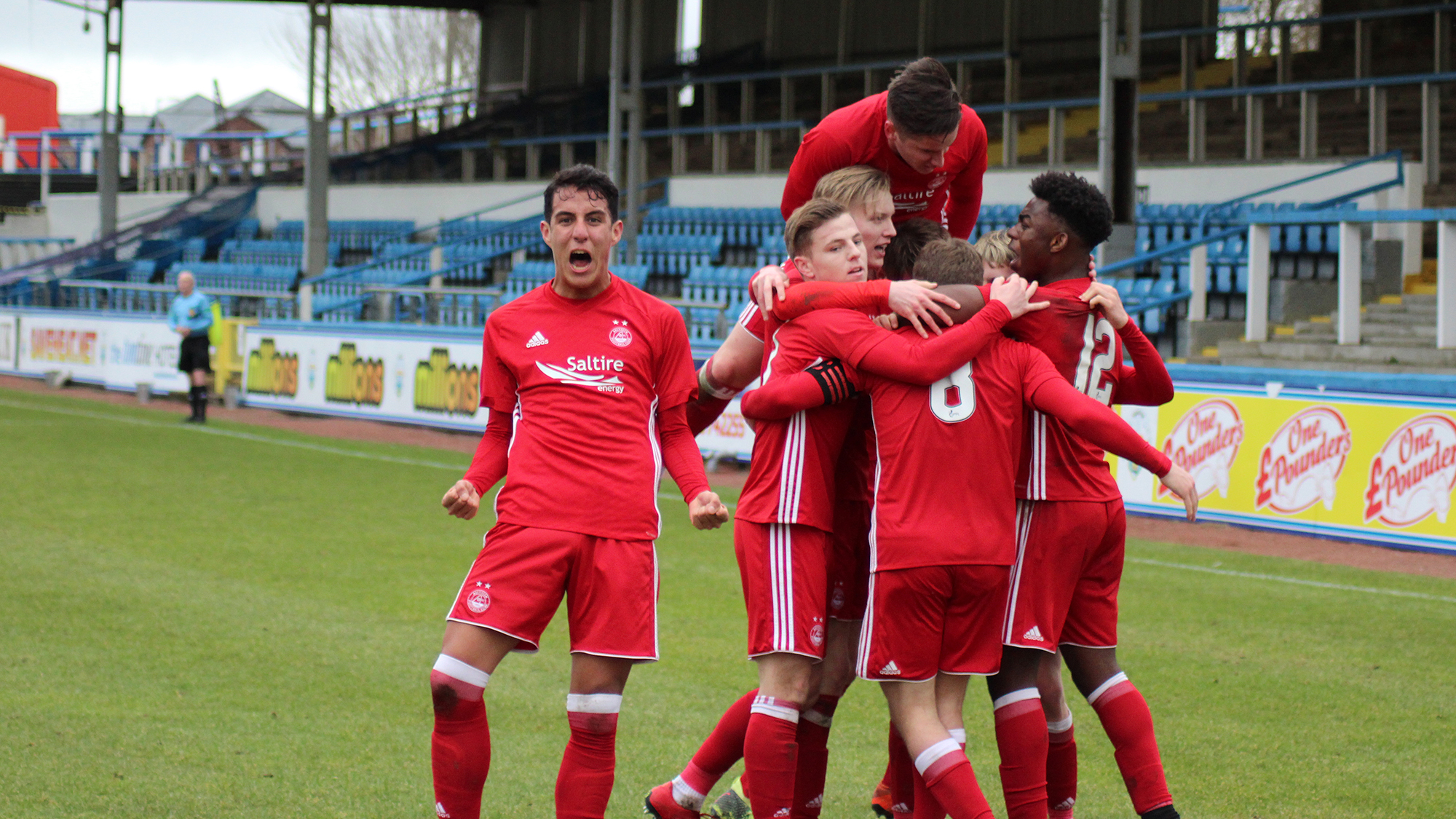 Young Dons put in superb second half performance at Cappielow

Aberdeen travelled to Greenock for the season’s first meeting with a Celtic second string who have played only 10 games so far this season. It was the young Bhoys’ second game in four days after winning 3-0 against St Mirren on Friday, while Paul Sheerin’s team looked to build on their solid win against Hearts at Forfar last week.

Bruce Anderson returned after a long injury lay off while Dean Campbell, Archie Mair all came back into the side after starring for Scotland’s Under 17’s in Spain last week.

Aberdeen made a dream start opening the scoring after only four minutes. Miko Virtanen played a delightful crossfield ball to Toby Wells wide left who exchanged passes with Ethan Ross before slipping the ball to Seb Ross who placed the ball past Mullen from eight yards. A fine goal, Ross’s eleventh of the season, after an excellent move.

Celtic enjoyed plenty of possession but were unable to make any inroads into the Aberdeen defence with Archie Mair’s main task being to deal with aimless long balls from the home side’s back line.

The opening twenty minutes had seen the home side enjoy the lion’s share of the ball but Aberdeen were always a threat going forward with the powerful running of Connor McLennan causing the Celtic defence a few problems.

On 22 minutes a nice jinking run by Bruce Anderson created space for the striker to shoot and Mullen produced an excellent save to deny the Dons a second goal.

Two minutes later a superb long ball from Celtic skipper Hendry picked out Aitchison bursting into the Aberdeen box but Mair produced an excellent save to maintain his side’s lead.

Aitchison saw another shot blocked at the near post after a fine run down the left by Church as the home side stepped up the pressure.

Aberdeen thought they had doubled their lead on 3 minutes when Anderson headed a McLennan cross past Mullen but the assistant referee ruled the ball had gone out for a goal kick before Connor’s cross came over.

A slack clearance from Mair gave Diver an opportunity to have a shot at goal but the keeper redeemed himself with a solid save.

On 34 minutes Dean Campbell was forced off, David Dangana taking his place. A minute later after a superb Sam Roscoe block on a Kennedy shot it was all square as Hendry fired a delightful left foot curler into Archie Mair’s top right-hand corner.

Celtic had their tails up and the Dons defence was being put under severe pressure as the game edged towards half time. Kennedy tried his luck from the edge of the box but Mair saved comfortably.

The Aberdeen goal enjoyed a charmed life in the final moments of the half as a succession of shots were blocked but the whistle blew to end the half with the scores tied.

The Dons made a great start to the second half, retaking the lead on 48 minutes. McLennan slipped the ball inside to Bruce Anderson who took a touch before firing past Mullen’s right hand to notch his seventh goal of the season for Aberdeen.

Two minutes later it could have been three but Mullen reacted well to keep out Ethan Ross’s cross-cum-shot.
Celtic captain Hendry received a yellow card on 53 minutes, presumably for a comment to the referee as the free kick had been given to the home side. A minute later a fine interception from Roscoe prevented Savoury’s cross picking out a Hoops attacker.

Bell became the game’s second booking on 56 minutes after a clumsy challenge on Virtanen who had made an excellent break down the left.

Aberdeen were pressing well and Celtic, for the first time in the match, were looking a bit rattled. However they were always a threat going forward and Hendry tested Mair with a right-footed effort from 16 yards.

Toby Wells saw a shot saved at the second attempt by Mullen, then Anderson fired over after a lovely cutback from Seb Ross. The pressure paid off on 63 minutes when Anderson and McLennan combined to get the ball to Ethan Ross who knocked the ball into the net to make it 3-1. Ethan looked suspiciously offside but there was no flag and the teenager had notched his first goal of the season.

The confidence was now flowing in the Aberdeen ranks and they were playing some delightful football. Bruce Anderson picked up a booking for a foul on Kennedy in the 75th minute. Celtic were pushing hard but the Dons were looking in determined mood.

With ten minutes left on the clock Chris Antoniazzi replaced Connor McLennan who had run himself into the ground. Bruce Anderson received a second yellow card despite winning the free kick and had to leave the field in the 84th minute.

The Dons reacted brilliantly to the setback by notching a fourth goal through Ethan Ross a minute later, cutting in from the left before firing past his Scotland Under 17 colleague Ryan Mullen.

David Dangana led a swift breakaway on 87 minutes but instead of passing opted to shoot himself and Mullen saved comfortably. Aitchison was booked for a foul as Celtic’s frustration grew just before Max Barry came on to make a Development League debut replacing two goal hero Ethan Ross.

Despite some late pressure, the Dons saw the game out to run out deserved winners after an excellent second half showing.