Young Dons open with a draw 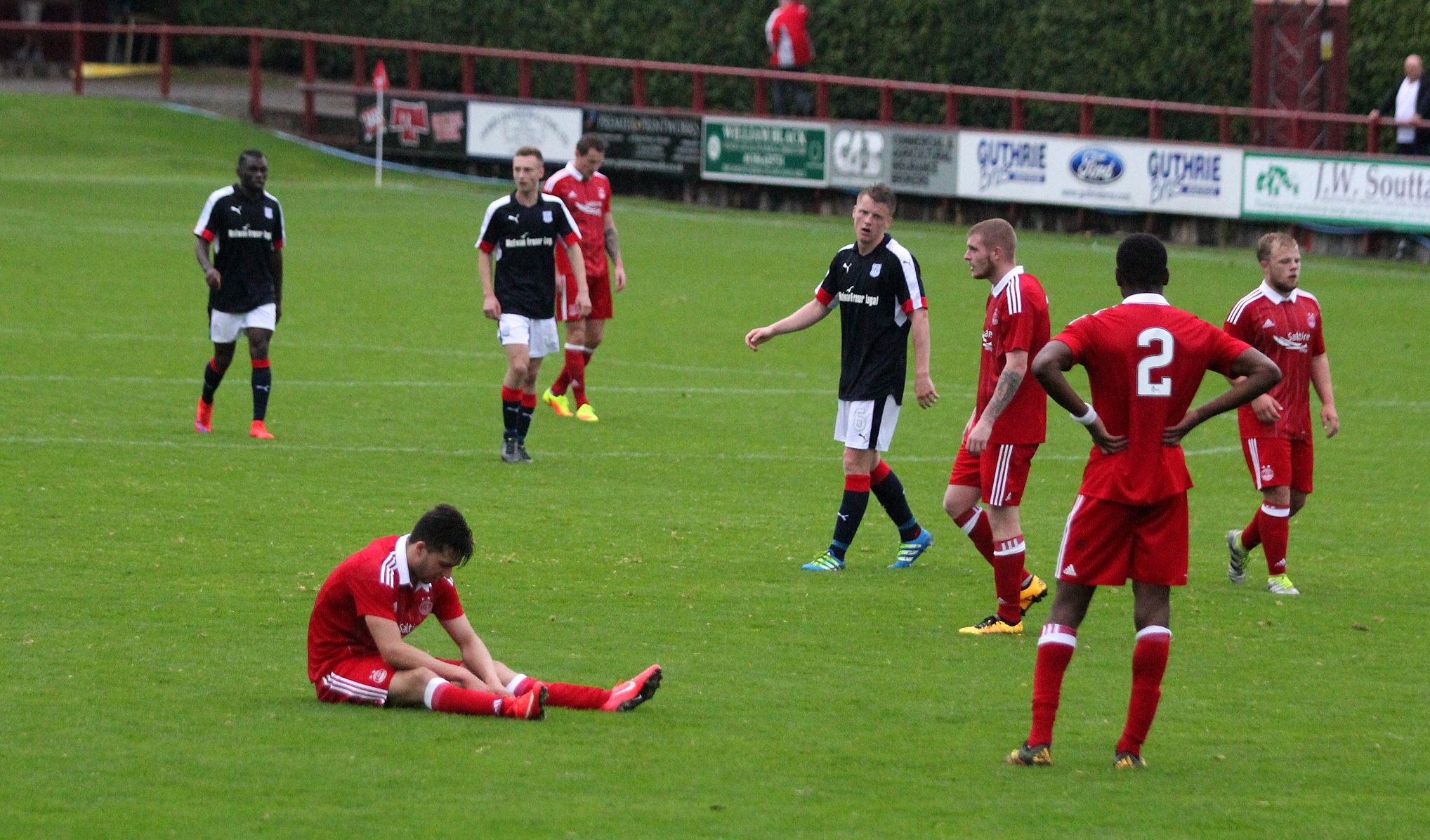 The 2016-17 Development League kicked off in Brechin this evening as Paul Sheerin’s young guns looked to build on the experience of having played senior opposition in the shape of Forfar last week in the Irn Bru Cup.

Having finished top then third in the League over the past two seasons, the current crop of Pittodrie starlets know a lot is expected of them over what will be a tough season ahead and were very keen to get off to a successful start against a Dens Park side which was in mid table last term.

The Dons lined up with Neil Alexander in goal, behind a back four of Kesi Omolokun, Callum Morris, Scott McKenna and Toby Wells. Frank Ross and Scott Wright were wide with Craig Storie and Dylan Thomas in the centre of midfield while Connor McLennan was tucked in just behind main striker Bruce Anderson.

For Callum Morris this was a much welcomed first start in an Aberdeen shirt after his summer move from Dundee United.

Former Don Nicky Low featured in the Dundee side.

Aberdeen started very quickly Craig Storie winning the ball well in the middle of the park to create an opening for Frank Ross to fire a dangerous ball across goal but the Dees defence did well to clear the danger.
Dundee had a good spell of pressure which saw Smith only inches away from getting on the end of a fine cross from Berry wide on the right.

Both sides were giving it 100% and there were some good skills on show with Frank Ross, named in the Scotland Under 19 squad this morning, prominent as the Dons pressed.

Skipper Scott McKenna was rock solid at the back winning every header and showing a good turn of pace as Dundee tried to get striker Smith going through the middle.

Chances were few and far between as the half progressed, largely due to both sides being very well organised and offering no space to their opponents.

A brilliant turn from Scott Wright gave the winger space for a cross but when he fizzed the ball across the face of goal it had too much pace for the inrushing Bruce Anderson.

The little striker was not to be denied however and on 29 minutes he opened the scoring rifling the ball home from 15 yards after superb lead up play by the impressive Frank Ross whose mazy run and delightfully weighted pass to Anderson were a joy to behold.

The goal put a spring in the steps of the Dons and they piled on the pressure to get a second, the pace of Scott Wright causing the Dundee defence lots of problems. Any time the Dark Blues threatened, Morris and McKenna were proving a major obstacle to their strike force as Alexander in the home goal was deployed only dealing with back passes and dishing out sound advice to the kids in front of him.

Nicky Low was working his socks off trying to win the midfield battle but his ring rustiness showed as he was forced to haul Wright down after the winger spun away from him.

Just before the break a Colquhoun error created an opening for McLennan but the big striker couldn’t get enough power behind his left foot shot to trouble Mitchell in the visitors’ goal.

A well contested first half illuminated by a goal of real quality which saw the Dons deservedly leading at the interval.

The Dons were out of the traps quickly in the second half and Frank Ross forced a great save from Mitchell after 47 minutes. The ball was recycled out wide to Scott Wright and his cross was drilled past Mitchell from an angle to make it 2-0 to Paul Sheerin’s team.

Dundee’s trialist was having a quiet game but he had a sight of goal a couple of minutes later but his shot was high and wide.

Ross was having a huge influence on the game and he came close again on 52 minutes forcing a smart save from Mitchell at the keeper’s near post. The first booking of the game came on 54 minutes when Taylor Berry, grandson of Dons and Dundee legend Jocky Scott, was cautioned for a tug on the shirt of Craig Storie.

Clark replaced Berry for Dundee on 58 minutes as the Dark Blues tried to get a toehold in a game which was threatening to run away from them. Aberdeen’s work rate and superior skills were very evident and the Dens Park youngsters were struggling to cope.

Completely out of the blue, Dundee pulled a goal back on 63 minutes when full back Sam Dryden raced down the right to deliver a fine cross which Smith converted with a powerful near post header. Suddenly it was game on again.

Scott McKenna became the second name in referee Duncan’s book on 68 minutes after a mistimed challenge on substitute Clark on the edge of the box. Nicky Low’s free kick didn’t trouble Neil Alexander as it flew high over.
Bruce Anderson came off on 71 minutes to a deserved ovation, Joe Nuttall replacing him in the Dons attack.

The visitors were playing with renewed energy after their goal and the Dons were having to dig deep to contain them. Joe Nuttall had a great chance to make it 3-1 on 78 minutes when McLennan picked him out in the box but keeper Mitchell denied the former Manchester City youth player with a fine diving save.

The Dons seemed to have weathered the storm and were back on the front foot again and Omolokun forced a corner after a fine run down the right. Callum Morris got on the end of the flag kick but his shot was too close to the keeper.

Colquhoun picked up a booking after 83 minutes for persistent fouling. Nuttall and McLennan both forced Mitchell into good saves as the game, which was still being played at a relentless pace, went into its final stages. Dundee made a second change on 87 minutes throwing Henry into the fray to take the place of goal scorer Mark Smith.

A really contentious decision from the referee gave Dundee a free kick thirty yards out. Scott McKenna had been excellent all evening and again the skipper looked to have made another perfectly timed tackle but ref Liam Duncan penalised the centre back by awarding a free kick. The set play came to nothing but the ball wasn’t cleared properly and when it came in from the right Matthew Henry nipped in to head an unlikely equaliser with his first touch of the ball.

Both teams tried to grab a winner but it ended up honours even. Dundee deserve plaudits for getting something from a game in which they never dominated but the Dons will feel they let victory slip from their grasp.