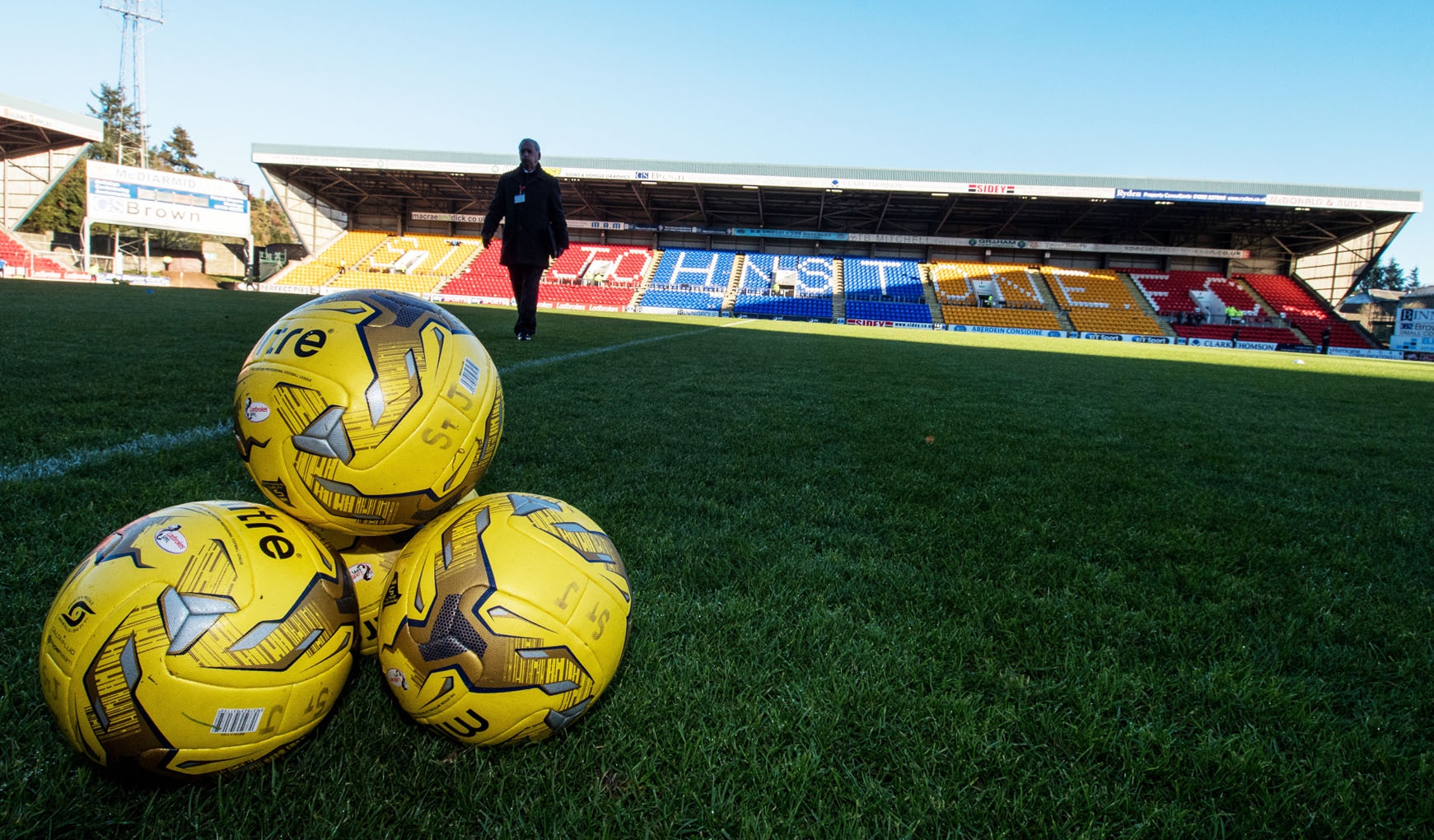 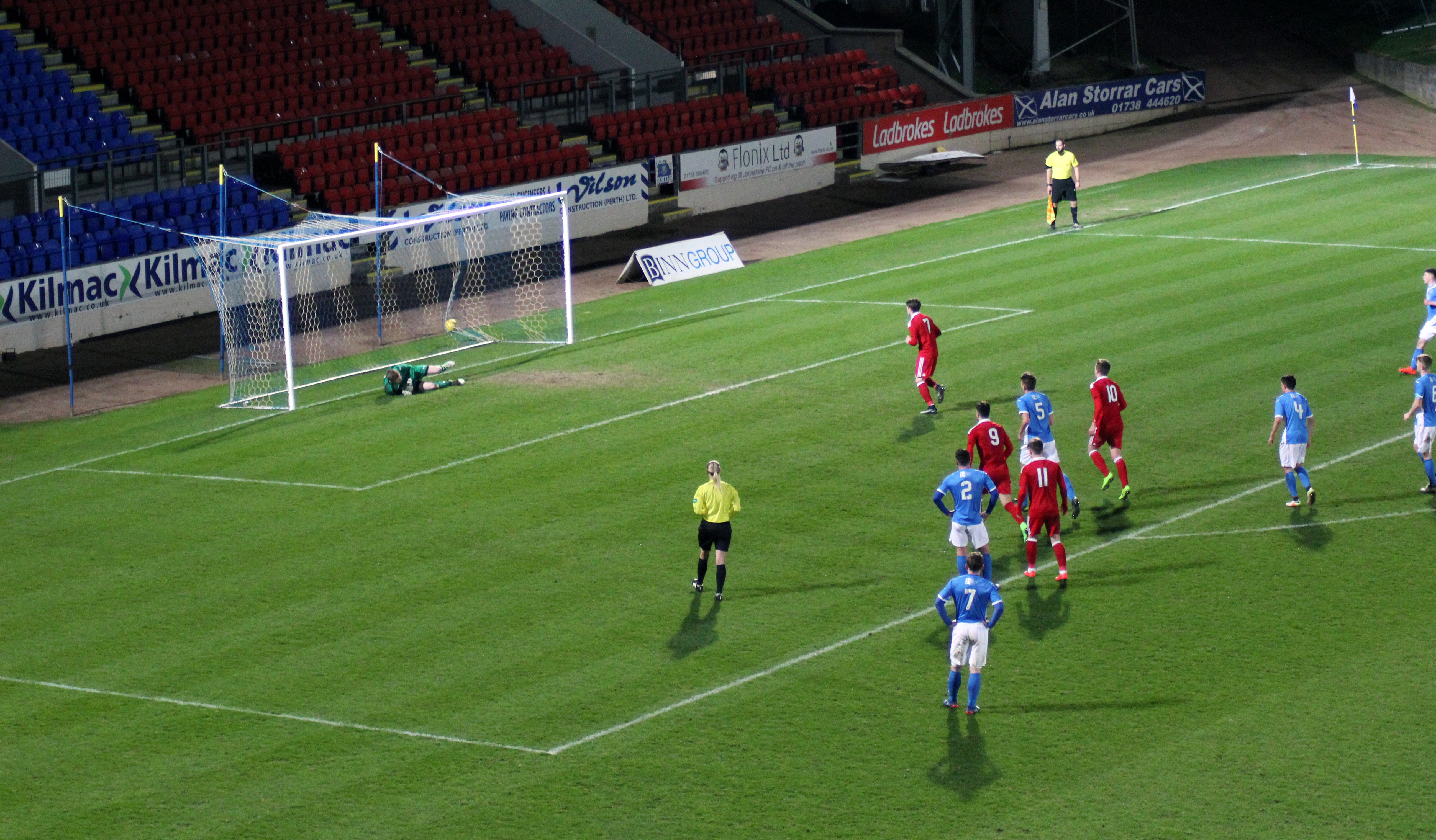 Aberdeen and St Johnstone met for the first time in this season’s Development League. The Saints have had a very strong side at U20 level for the past few seasons but this year they are currently languishing in bottom spot in the table while the Dons are currently in eleventh position.

After last week’s fine win against Kilmarnock, Paul Sheerin kept faith with the majority of the boys who earned that 4-2 success in Peterhead. David Craddock rotated with Robbie Mutch in goal and Aaron Norris slotted into midfield as Seb Ross is on Scotland Under 17 duty. Otherwise the starting eleven was unchanged. The home side were first to show with a quick break by Craig Thomson winning them an early corner but when the ball came in to the area centre back Wilson couldn’t keep his header down.

Aberdeen hit back and Connor McLennan engineered a shooting chance at the edge of the area. His powerful shot was too hot for keeper McKenzie but Scott Wright’s attempt from the rebound was blocked.

The Dons took the lead in the seventh minute. Wright laid the ball off for Jamie Henry to shoot from the edge of the area and when the keeper could only parry the shot, Connor McLennan was perfectly positioned to knock the ball into the net for his 7th Development League goal of the campaign. Good poacher’s instincts from Connor.

Four minutes later the lively Craig Thomson powered forward from the halfway line but his shot was weak and posed no problems for Craddock. Home skipper McLaren tried to catch Craddock out at his near post with a twenty yard free kick but his effort found the side net.

Good work from Wright and Anderson sent McLennan charging down the right but his cross was too strong. Aberdeen’s pace on the break was posing real problems for the Saints rearguard.

The home side were not shy to come forward themselves and Craddock did well to clutch a snapshot from Hurst on 24 minutes. Seconds later a fine pass from Coulson found McLaren clear on the left but his shot cannoned off Craddock’s right hand post and away to safety. A let off for the visitors.

Harlain Mbayo took a knock on the half hour but was able to resume after treatment. Sam Roscoe was having a fine game at the back for the Dons and his excellent ball out of defence sent McLennan racing down the left but he was crowded out by the Saints defence.

Frank Ross had been kept quiet by the Saints defence but one dazzling run saw him beat three men before being pushed too wide for a shot. Back came the home side and Craig Thomson’s rising twenty yard effort was well clutched by Craddock who was looking very composed in the Dons goal.

Ross and Wright then combined well to present a shooting opportunity to McLennan but his shot lacked the power necessary to trouble keeper McKenzie. It had been an open entertaining game with both sides enjoying good spells.

Saints brought Docherty on at half time in place of skipper McLaren. The Dons were unchanged.

Scott Wright was first to threaten in the second half but he got under his ten yard shot and fired over – the sort of chance he normally gobbles up. McLennan then saw a shot on the turn well saved as the Dons applied early second half pressure on the Perth goal.

Simpson tried his luck from distance for Saints but Craddock was well positioned and made the save look easy.
Jamie Henry was pulling the strings in midfield and his neat ball to McLennan in the box saw the striker hauled down by Jardine. A yellow card for the defender and a spot kick to the Dons. Scott Wright sent the keeper the wrong way to make it 2-0 to Aberdeen. An eighth League goal for the Balmedie speedster. Back came the home side – Trickery from Docherty on the touchline saw the sub find space in the box but Roscoe was alert to the danger to clear. The big man was having probably his best game in an Aberdeen shirt.
Craddock was then forced to race fully thirty yards from his goal to snuff out the threat of Hurst getting on to a long ball – great sweeping by the Dons keeper.

Joe Nuttall replaced Connor McLennan on 65 minutes – a strong performance from the striker whose pace and power caused endless problems for the home defenders. Connor made his first team debut on the same ground.
Hurst pulled a goal back for the home side on 69 minutes when he turned the ball in from close range after Docherty had knocked a long ball from the left back into the middle. A minute later only a point blank save from McKenzie prevented Nuttall getting on to the scoresheet after great work by Wright.

On 75 minutes Comrie came on in place of Wilson for Saints. Craddock made a smart save from Coulson as the homesters pushed for an equaliser.

Ross played Wright through and he appeared to be brought down in the act of shooting but referee Clark saw no infringement and gave a corner rather than a penalty. Dean Campbell came on for Norris on 79 minutes.
Battling play by Anderson saw him exchange passes with Nuttall before driving into the area but his left foot shot flashed wide of the post. Saints pushed forward again but Toby Wells was well placed to block Craig Thomson’s cross.

The winger was again the main threat to the Dons on 89 minutes and his stinging shot from the angle was expertly saved by the impressive Craddock.

As the game went into stoppage time David Dangana came on to replace Bruce Anderson who once again had given his all for the cause.

The full time whistle went before the sub got a touch to bring the curtain down on an impressive showing from the Young Dons who thoroughly deserved the victory.