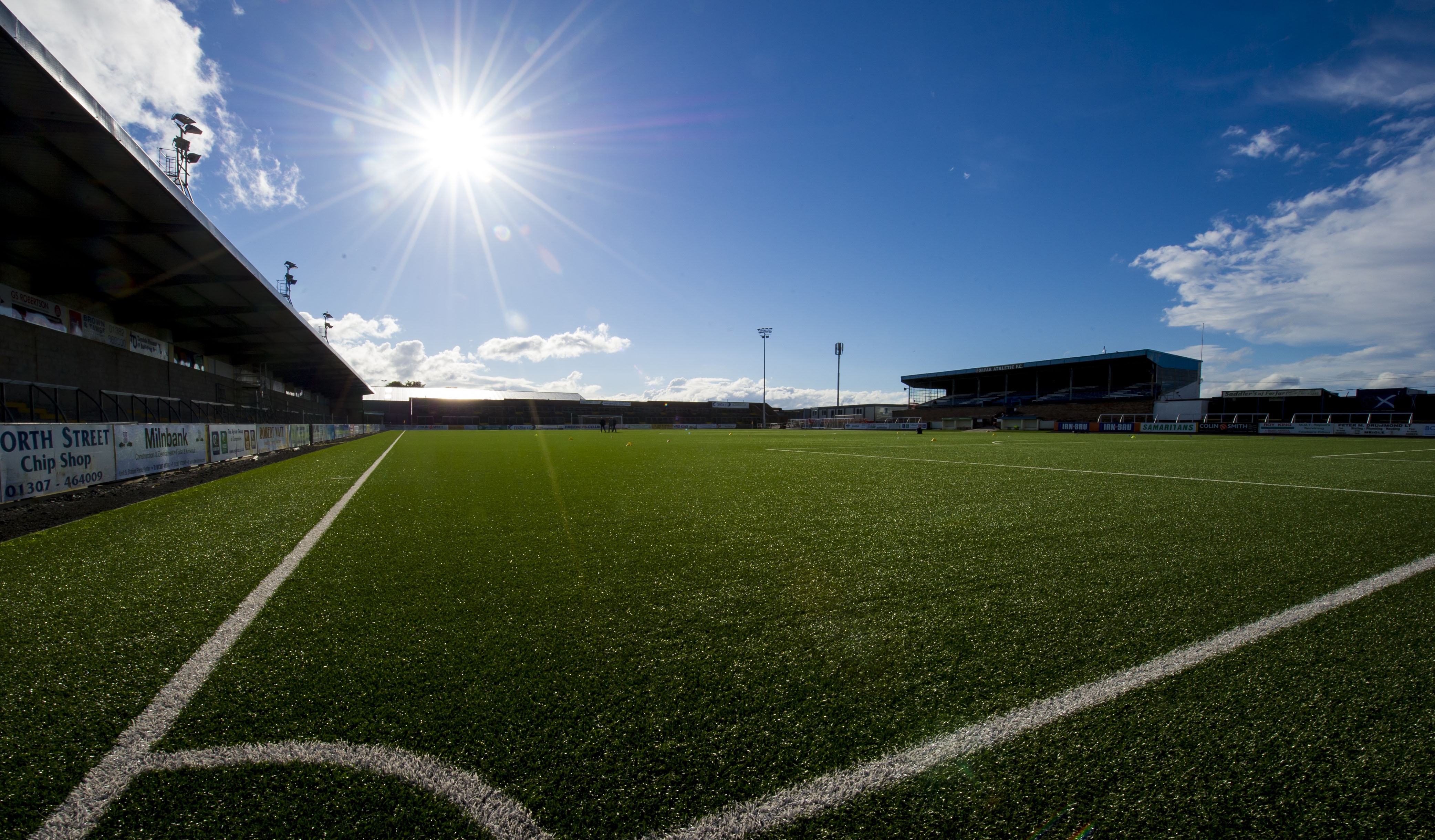 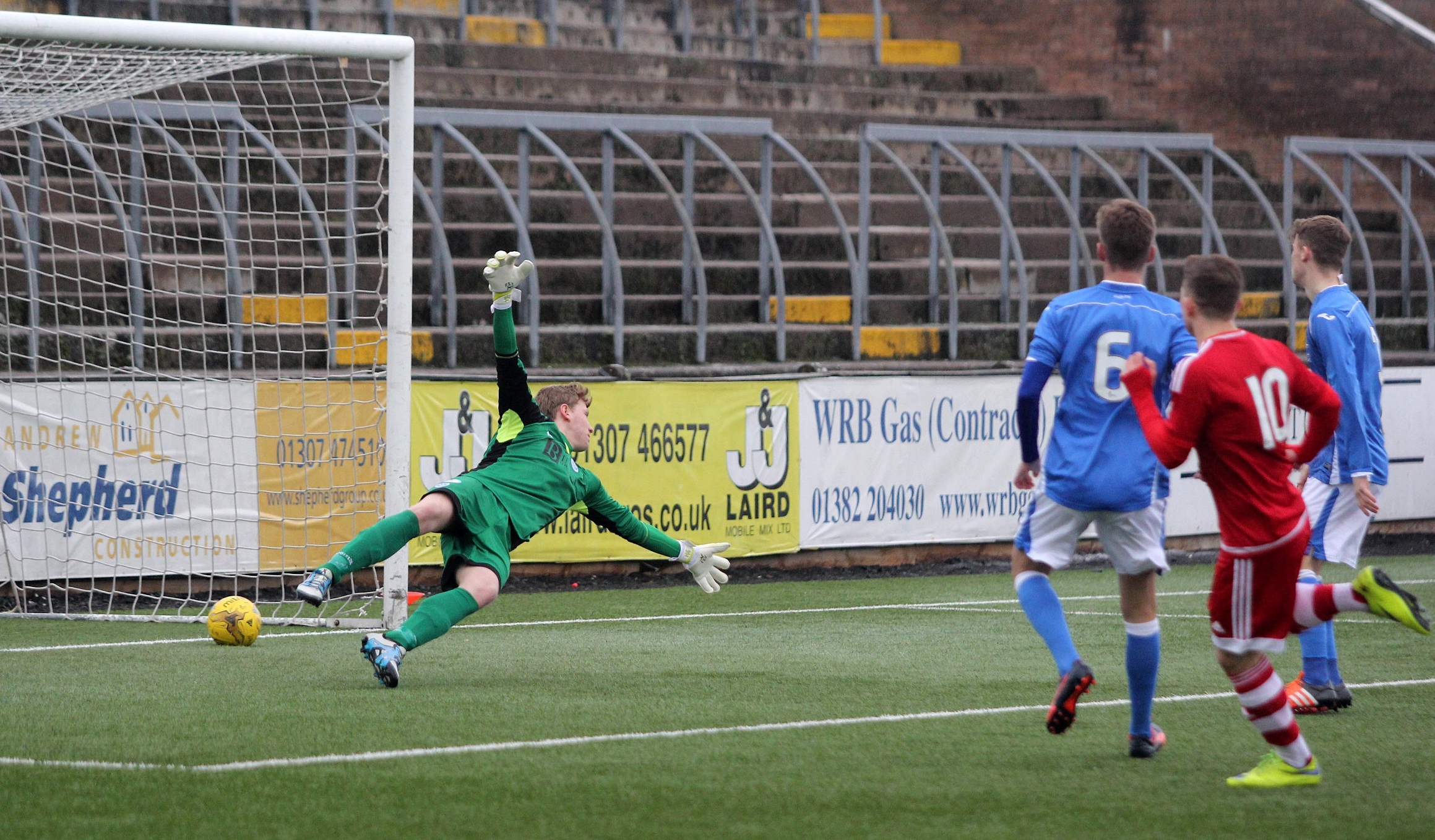 The young Dons were denied victory this afternoon after an equaliser deep into stoppage time. Aberdeen took an early lead when Cammy Smith scored in the second minute. A through ball from Thomas found the run of McLennan out on the left. The striker played the ball into the path of Smith and he brilliantly created space before slotting the ball into the far corner. The Perth side then equalised in controversial fashion. From a corner a high ball was put back into the box by Brown. As keeper David Craddock went up to catch the ball he appeared to be impeded but the referee said there was no foul and as the ball landed in the net he gave the goal. Paul Sheerin’s side then equalised when a ball over the top from Michael Rose released Scott Wright and the winger produced a brilliant first time lob to beat the keeper.

The game was quite open in the first 20 minutes or so but after that it became a real battle in the middle of the park and there were few chances at either end. St Johnstone had the territorial advantage in the second half as they went looking for an equaliser but the Dons defence limited them to very few chances. With an hour gone keeper Craddock raced out of his area to clear a dangerous through ball but whilst making the interception he collided with Michael Rose. It looked a very serious injury and the game was held up for 10 minutes or so before the centre half was stretchered off. Thankfully Michael is ok though.

The Dons held out for the 90 minutes but then had to face ten minutes of added time. They could have made the game safe when Frank Ross teed up substitute Bruce Anderson but his shot went agonisingly wide. Then in the seventh minute of added time Liam Caddis fired a shot low into the corner and the Saints were level. Aberdeen could have won it in the final minute when an Anderson header was brilliantly saved by McKenzie.
The young Dons can consider themselves very unfortunate as they worked extremely hard against a good St Johnstone side.

Aberdeen U20s today fielded a trialist. Shaip Tela is a Macedonian U19 player who the Dons are having a look at. The full Aberdeen line up was Craddock, a back four of Henry, Culjak, Rose and Harvie. Thomas and Tela were in centre midfield with Wright and Ross in the wide areas. Cammy Smith played in behind McLennan who was up top.

St Johnstone had a couple of players with first team experience. Also their U20 side produced a very good result to knock Celtic out of the SFA Youth Cup last week on this ground.

Aberdeen got off to a great start. After initially winning a corner within a minutes, Michael Rose then put a ball down the channel which Connor McLennan chased down. The 16 year old striker held the ball up well and played a well-timed pass into Smith. Cammy had a number blue shirts round about him but when one of the defenders slipped he immediately created room for a shot and fired a low effort past McKenzie who had no chance.

Throughout the first half when attacking the young Dons looked dangerous and had options down the right, the left and through the middle. After seven minutes Daniel Harvie, who was probably the pick of the Aberdeen players today, played a neat pass towards the run of McLennan but the pass was just slightly over hit.

Just after 10 minutes the home side were level. They won a couple of corners which Aberdeen defended reasonably well. Eventually the ball fell to Scott Brown who launched a high up and under into the area. Goalkeeper David Craddock came for it but seemed to be impeded by McCawl who was in an offside position.

The striker held his ground and when the ball landed up in the net the referee awarded the goal as he took the view that there was no infringement. It was certainly a freak goal.

On 16 minutes Frank Ross played in Cammy Smith who got a shot away but the ball was half blocked and McKenzie was able to gather.

Then on 17 minutes Aberdeen regained the lead. Rose played a great ball over the top which released Wright. Scott still had a lot to do but judged his first time lob perfectly and the ball sailed high over the keeper into the net. A piece of real quality.

After 20 minutes the Dons looked to have grabbed a third. From a corner kick the ball was knocked back into the six yard box and McLennan took a touch before firing home. However the linesman had his flag raised. It looked a very close call and no one in a blue shirt was appealing for offside.

A minute later Hurst fired in a powerful shot but Craddock was well positioned to make the save look easier than it was.

After a very open game in the first 20 minutes or so, the snow started to fall and at the same time the match became a lot tighter and a midfield battle. Neither team had any clear cut openings, although McLennan had a couple of half chances. On the stroke of half time Eoghan McCawl went down in the area but the referee correctly waved away the penalty appeals.

At the start of the second half the Dons trialist, who was having a tidy game in the middle of the park, put in a great cross for McLennan. Connor powered a header towards goal but the ball was straight at the keeper.

After that the Perth side started to dominate territorty and possession. Aberdeen were happy to sit in and try and hit on the break. For all the possession they had, St Johnstone did not create a lot.

On 64 minutes there was a real moment of concern. A long ball over the top caused a problem for the Aberdeen backline so Craddock came racing off his line to clear the danger. The keeper did well to be alert to the situation however whilst making the clearance he also collided with Rose. The big central defender, who has just returned from a loan spell at Forfar, was lying on the ground not moving but thankfully after lengthy treatment from Dons physio Aimee Clark, who was assisted by the St Johnstone medical people, Michael was stretchered off but we are glad to report he is ok.

The game was stopped for around ten minutes. Joe MacPherson came on and slotted in central defence alongside Culjack. With ten minutes to go Cammy Smith was replaced by Anderson. Aberdeen were working tirelessly to protect their lead and crowding out any St Johnstone player when they got near the box. However on 84 minutes Lander played a very good defensive splitting pass through to substitute Simpson. He managed to get a shot away but the ball rolled just past the post. On 87 minutes Aberdeen should have made the game save. McLennan initially did really well to win the game high up the pitch. He then played it to Ross who did brilliantly to tee up Anderson. The youngster fired in a low shot which beat the keeper but the ball rolled agonisingly past the post.

In injury time, and there was correctly ten minutes played, full back Fisher was slightly fortunate to stay on the field for a rash challenge. Harvie was also yellow carded as the game became frenetic.
On 96 minutes Dangana did very well to beat his man in the box but his effort was saved by McKenzie. Then on 98 minutes St Johnstone got an equaliser. A corner was half cleared from the left. The ball went over to the right and Harvie did well to clear the initial danger after a cross came in from Martyniuk but the ball broke to Liam Caddis who blasted a shot past Craddock.

That was not the end of the action though.

Both teams to their credit went in search of a winner. Thomas got the break of the ball in the centre circle. He fed captain Jamie Henry out on the right. Jamie put over a really clever cross which was not deep enough for the defenders to attack and he picked out Anderson. His first time shot looked to be heading into the corner but Mckenzie produced a great save to win his a team point.