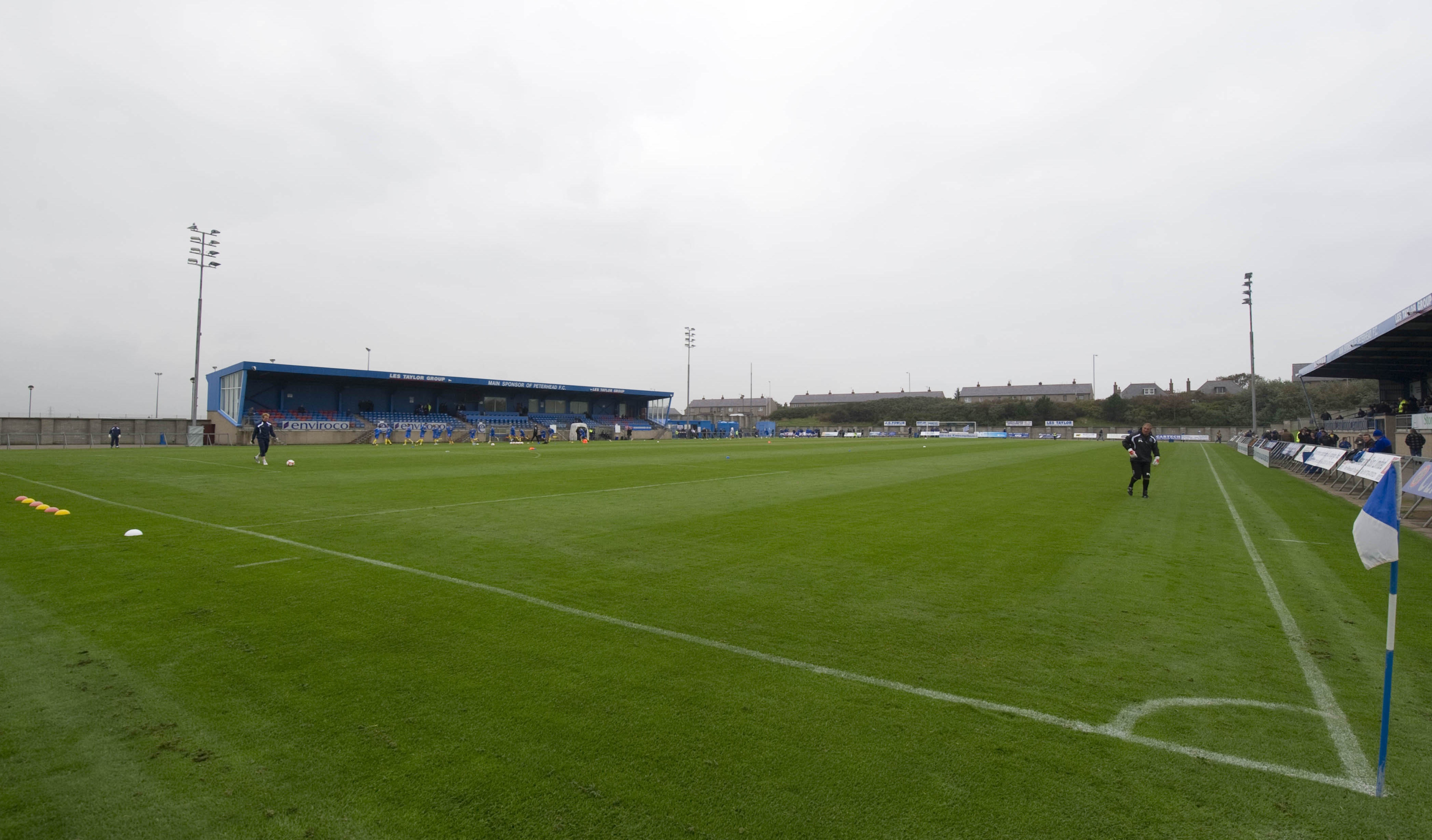 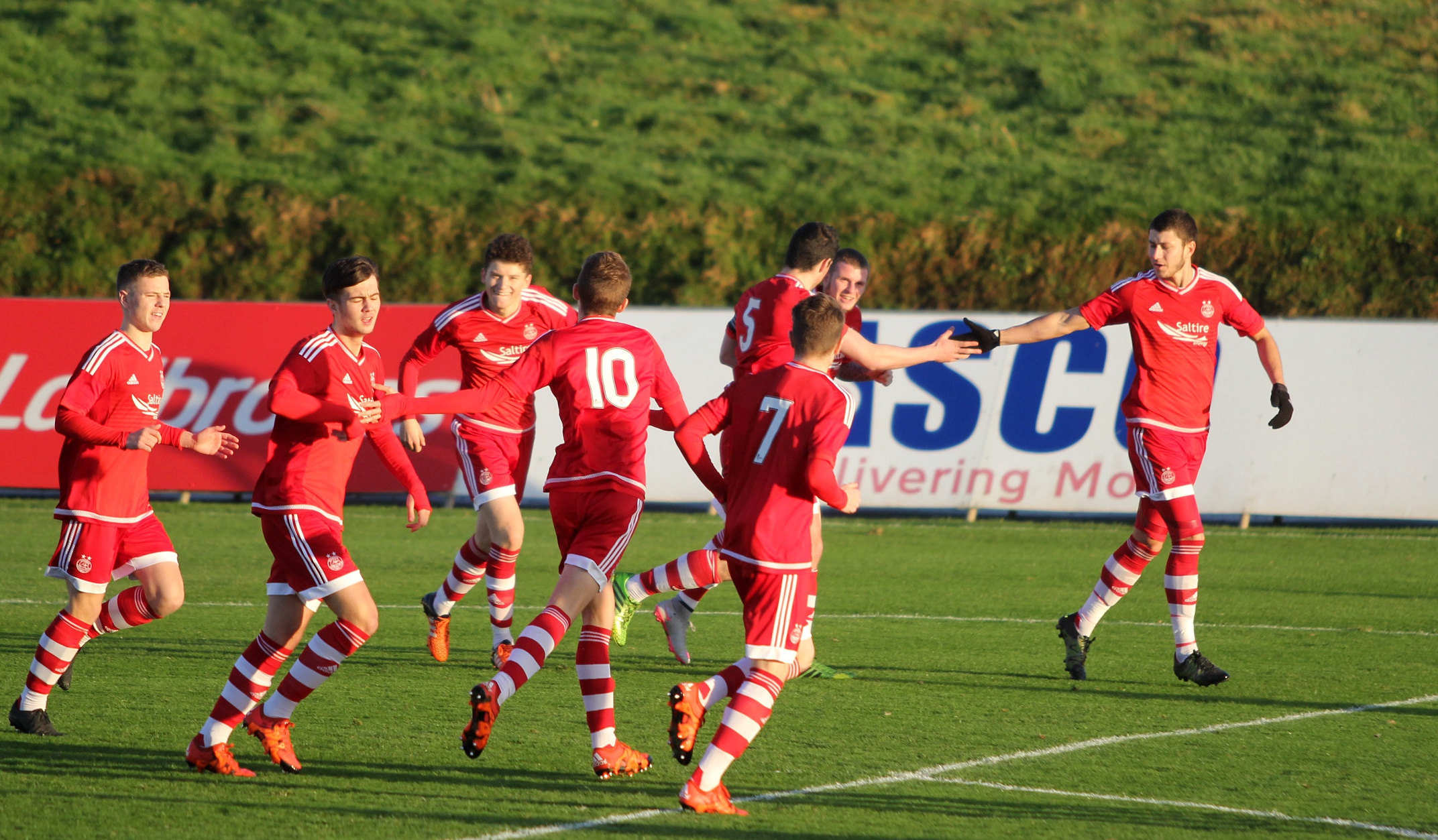 The young Dons, who were again without any overage players today, produced a good performance at a very windy Peterhead to beat Dunfermline 4-0. Craig Storie opened the scoring as early as the second minute. With a strong wind at their backs the young Dons then dominated the first half but were only one goal to the good at half time thanks to some fine goalkeeping from Cammy Gill. Playing into the wind in the second period, Aberdeen were under pressure early on but that was relieved when a great Jamie Henry cross was headed home by Storie. Then for a ten minute spell the visitors should have got themselves back into the game but they missed a penalty and then spurned another great opportunity. Shortly after that Frank Ross won a penalty and Storie completed his hat-trick. As well as his goals Craig produced another very fine performance. A few minutes later Frank Ross got a deserved goal to complete the scoring. Both Frank and Scott Wright produced some great individual skills to lighten up what was a very enjoyable game.

Aberdeen lined up with the same side that beat Kilmarnock last week at Rugby Park. Craddock was in goal with a back four of Henry, Culjak, McKenna and Harvie. Storie and Thomas were in central midfield with Wright on the right and Robertson on the left. Frank Ross played the number 10 role, in behind Anderson up front. Joe Nuttall, Kalvin Orsi, Stuart Rennie, Robbie Mutch and Liam Lambert are still on the injured list. Hoepfully both Joe and Kalvin will be available shortly.

Aberdeen made a great start when Sam Robertson won his team a corner in the second minute. Frank Ross played the ball in and Craig Storie at the back post side footed it home. It was a great delivery from Frank who hung the ball up perfectly in the wind and Craig was well positioned to score.

The Dons had a very strong wind behind them and aware of this, they were trying the odd shot from distance. A effort from Thomas in the 7th minute moved about all over the place and the Dunfermline keeper had to gather at the second attempt.  On 10 minutes Frank Ross got to the by-line but his cut back failed to find a red jersey. Four minutes later Anderson showed good anticipation to cut out a weak pass back. He got in ahead of the keeper but Cammy Gill in goal did very well to recover the situation. On 19 minutes a piece of real quality from Storie, the midfielder made room for himself at the edge of the area with a great touch and then curled a shot inches past the post.

Aberdeen were by now camped inside the Pars half but the wind was causing them to over hit their passes in the final third of the pitch.

On 27 minutes an Aberdeen corner was cleverly knocked back into the six yard box by Harvie and Anderson was very unlucky to see his overhead kick slide past the post. A minute later Scott Wright did very well down the right after a great bit of skill and he picked out Thomas but the young Welshman lifted his shot over.
On the half hour mark Dunfermline won their first corner in a rare attack.

After 31 minutes Frank Ross put over another great delivery this time from a free kick but Harvie could not quite win the ball cleanly. Then a minute later Henry put over a good ball but frustratingly no one could get on the end of it. On 35 minutes Storie put over a ball from the left but again no takers. On 38 minutes great play by Scott Wright who was now playing on the left. He beat his man brilliantly with a neat turn and might have got a penalty when his heels were clipped. To his credit he stayed on feet and cut the ball back to Anderson but the keeper produced a great save with an out stretched foot. He then made another very good stop from Storie after Dunfermline failed to clear a corner as the ball hung up in the wind.

Aberdeen should have been well ahead by now but they could not turn their possession into goals. Harvie and Storie were both booked as they allowed their frustrations to get the better of them. Credit to Dunfermline who were battling away bravely.

Dunfermline started the second half very strongly. In the first couple of minutes they forced a series of corners which the Dons struggled to deal with.

However Aberdeen were finding it easier to pass the ball into the wind and were looking dangerous going forward. An Anderson effort lopped onto the roof of the net.  Then on 51 minutes a great ball in by Jamie Henry and Storie planted a superb header into the corner of the net. Jamie’s ball in was judged perfectly.

From that point on you might have expected the Dons to go on and win the game comfortably but the visitors enjoyed a really good spell around the hour mark. On 63 minutes full back Cammy McLair skipped away from a few red shirts before being taken down by Henry inside the box. Referee Dan McFarlane awarded a penalty which was taken by Paul Joseph Crossan. Crossan sent Craddock the wrong way but he also pushed the ball inches past the post. Minutes later another great chances was wasted when Crossan set up substitute Callum Smith but from close range he pulled his shot just wide.

The Pars when made to pay for those misses. On 70 minutes Frank Ross showed a great turn of speed to get away from Shaun Rooney and when the centre half tried to recover the situation he fouled Frank inside the box. Craig Storie took the spot kick, sent the keeper the wrong way and completed his hat-trick. Four minutes later Dylan Thomas played a great ball to Ross who beat the keeper for number four. The Dons had chances to add to the lead. Wright produced a great run to set up substitute Norris but his effort just went over. For the final ten minutes Aberdeen threw on youngsters Connor Mclennan and Andy Youngson. It was great to see Connor involved again as the striker has been out since the start of the season with a long term injury.