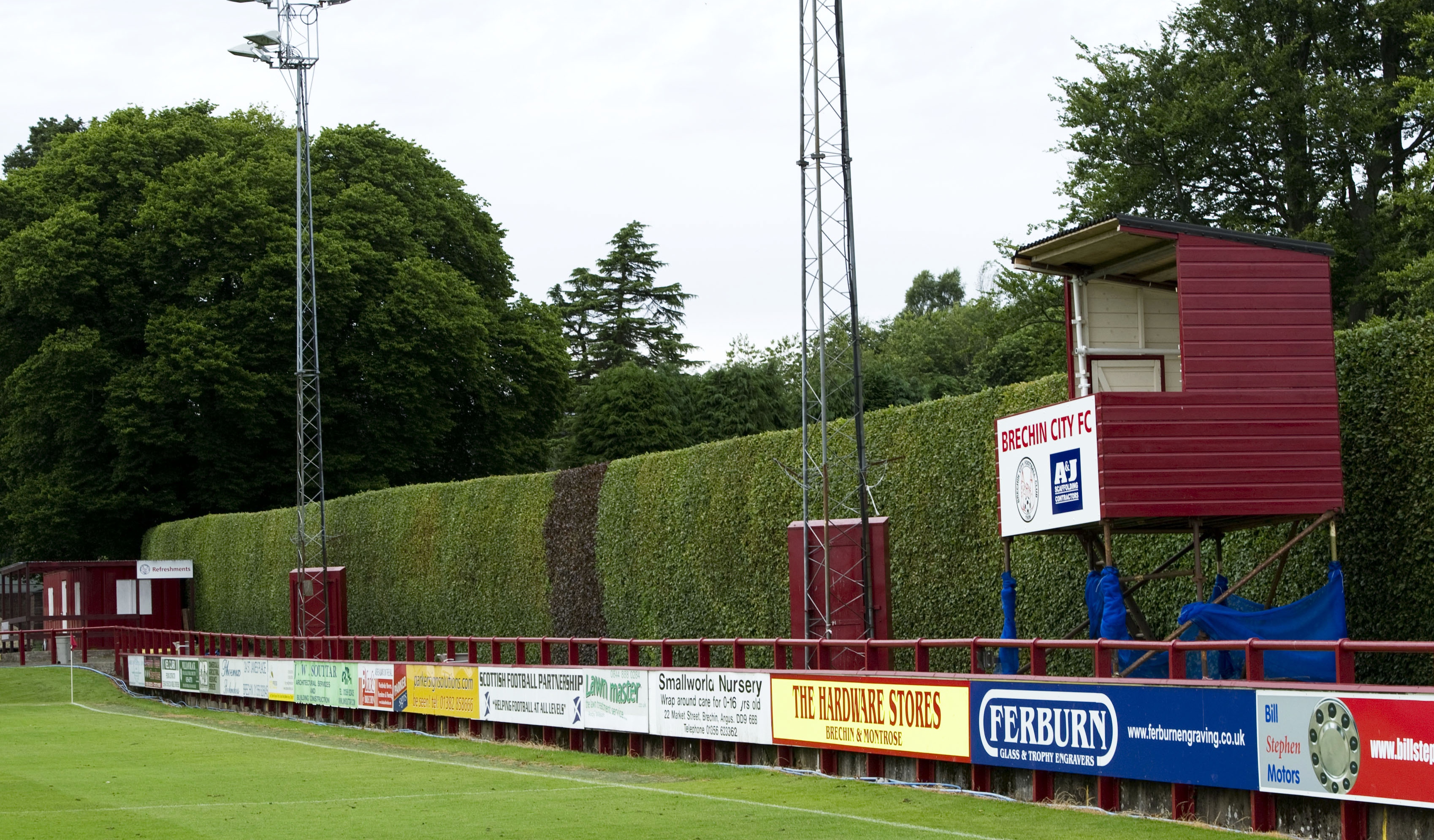 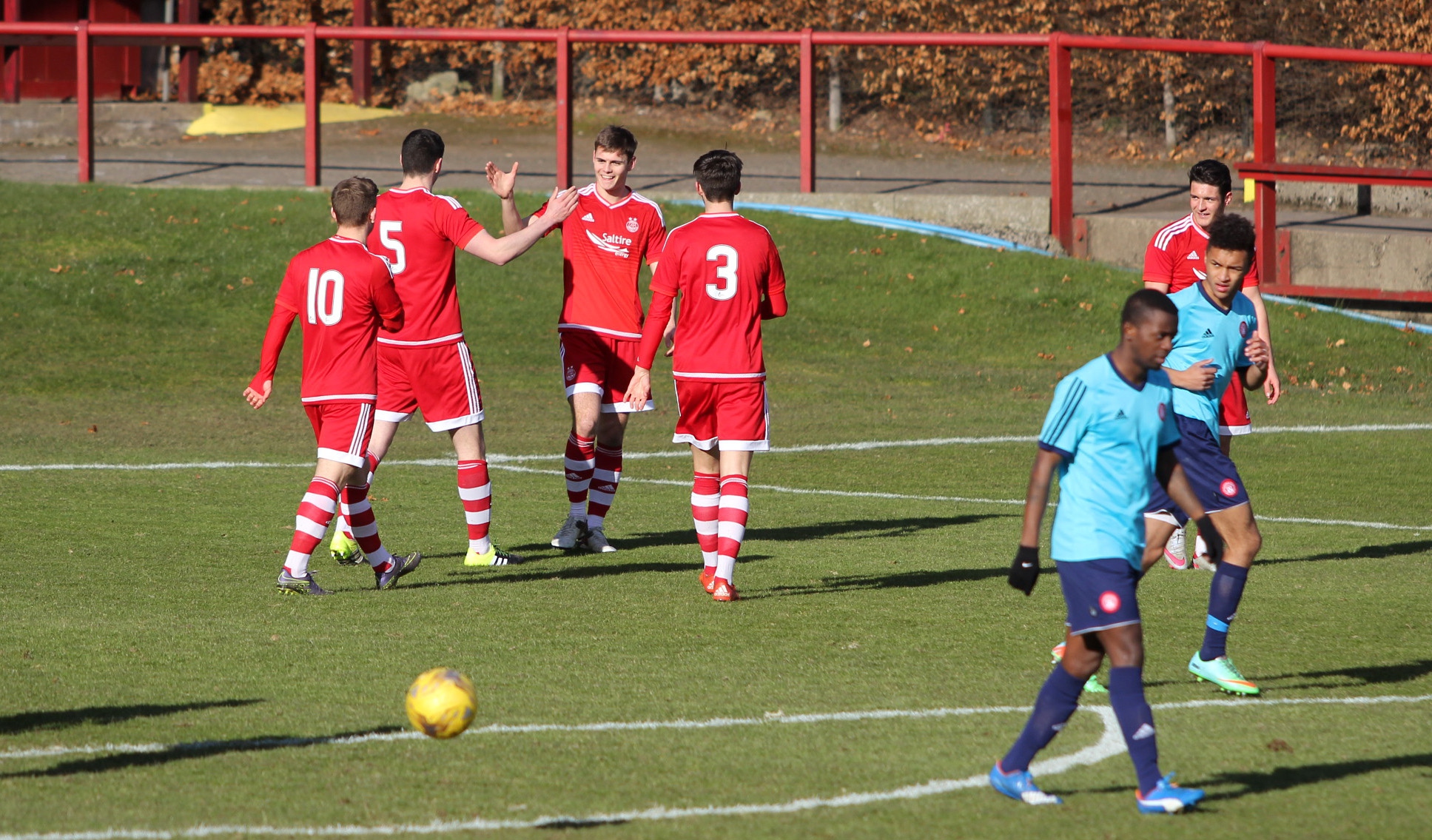 Aberdeen enjoyed a fine victory over Hamilton this afternoon. The young Dons lost both games to the Acccies last season on their way to the Development League title. The Lanarkshire side, who currently sit second in the table, also beat the Dons at New Douglas Park this season so Paul Sheerin will have been delighted with today’s result and performance. The only goal came on five minutes when Michael Rose produced a very good header from a Frank Ross delivery. Both teams then had chances in a very high quality and competitive game which was a very good advert for the league.

Adam Collin made his first appearance in an Aberdeen shirt behind a back four of Harvie, McKenna, Rose and Henry. The midfield four were Thomas, Norris, Wright and Ross with Smith and Orsi leading the attack.

Aberdeen made a good start when Smith found Orsi who crossed for Wright, but his shot from close range was saved by the keeper – although the flag was also up. In the third minute. Accies forced an opening for Steven Boyd and he was able to get a shot away but it was straight at Collin.

In the fifth minute, a great ball over the top by Henry found the run of left-back Harvie. He was in a promising position but his shot was blocked and the ball went behind for a corner, the Dons’ third of the game. From the left, Frank Ross swung in a good ball towards the back of the six yard box and Michael Rose produced a superb header to find the net. A great start for the Dons.

For the next ten minutes or so, Aberdeen played some great football and were well on top but slowly the visitors worked their way back into proceedings. They won their first corner on 14 minutes and two minutes later, Steven Boyd again created room for a shot which was well tipped over by Collin.

Hamilton were now more in the game and it was an even contest.  After 25 minutes, Mandiangu made a promising run down the left and forced his way into the box but his shot hit the side netting. He might have been better trying to find a team mate in the middle.

Back came the Dons and, on 27 minutes, a superb ball across the box by Harvie was missed by everyone. The Dons left-back had another solid game today and, after being out for the opening months of the season, he is looking back to his best.

On the half hour mark, Shaun Want headed a corner just over as Rose and McKenna did just enough to put him off. Then came another opening for Aberdeen in the 32nd minute. Cammy Smith worked his way into a good area after probing around the box. He picked the ball up close to the by-line and cut it back for Norris. His first time shot was on target but Arron did not get hold of the ball cleanly and keeper Alan Martin was able to make a comfortable save.

Then on 35 minutes, the Hamilton keeper was slightly fortunate when he came racing outside his area to deal with a high bouncing ball. Twice he was challenged by Aberdeen players but on each occasion he got the break of the ball and was able to clear his lines. Seconds later, left-back Ben Reilly played a good ball down the line for Eamonn Brophy. He cut inside and fired in a low shot which forced Collin into a very good save. The big keeper got down very well to stop the shot across him with an outstretched arm. Brophy scored a hat-trick against the Dons last season but today was well marshalled by Rose and McKenna – both centre-halves were outstanding.

A minute later, Ross fired a shot just wide. After 38 minutes a Ross corner found McKenna but he could not direct his header on target. On 41 minutes, on the break Scott Wright did well with a good run. He beat a defender and then played the ball wide to Smith but his shot from a tight angle could only find the side netting.
Then, again on the break, Ross nipped in ahead of the last defender. The Dons had a two on one but Frank’s square ball looking for Orsi was too close to the keeper who was able to gather.

Aberdeen started the second half strongly. From a Harvie free-kick, Rose was not far away from getting his second but he could not make good enough contact. Then from a Ross corner, Harvie just could not get high enough to head home.  Seconds later, Harvie was involved in the action again when a great ball found Orsi, but his shot was blocked. The Dons continued to look threatening and a McKenna knock down found Orsi but his shot was off target.  Aberdeen had a lot of the ball but could not get that all-important second goal.

The final half hour of the game became a real battle with few chances. The pitch had started to cut up which dictated the how the game went. Although there was not the same quality on show, it was still compelling viewing because of how competitive the match was.

On 63 minutes, a great ball released Mandiangu who got in behind the defence but Collin stood up well to the shot. Five minutes later, Aberdeen had probably their best chance of the half when Wright set up Orsi, but he fired over. Scott Wright himself then had a half chance.

Hamilton was pressing hard for an equaliser but the Dons’ defence were giving them nothing. Long balls were put onto the back four but McKenna and Rose were winning all their headers. The rest of the team were working hard in all the 50/50 challenges.

On 75 minutes, Ross Cunningham fired over, then Collin blocked an effort from Mandiangu before a Hamilton player blocked a shot from Cunningham. On 86 minutes the best chance for the visitors fell to substitute Marc Kelly. The ball broke to him inside the area but he hurried his shot and Collin was able to make the save.
Aberdeen then saw out the game to claim another three points.