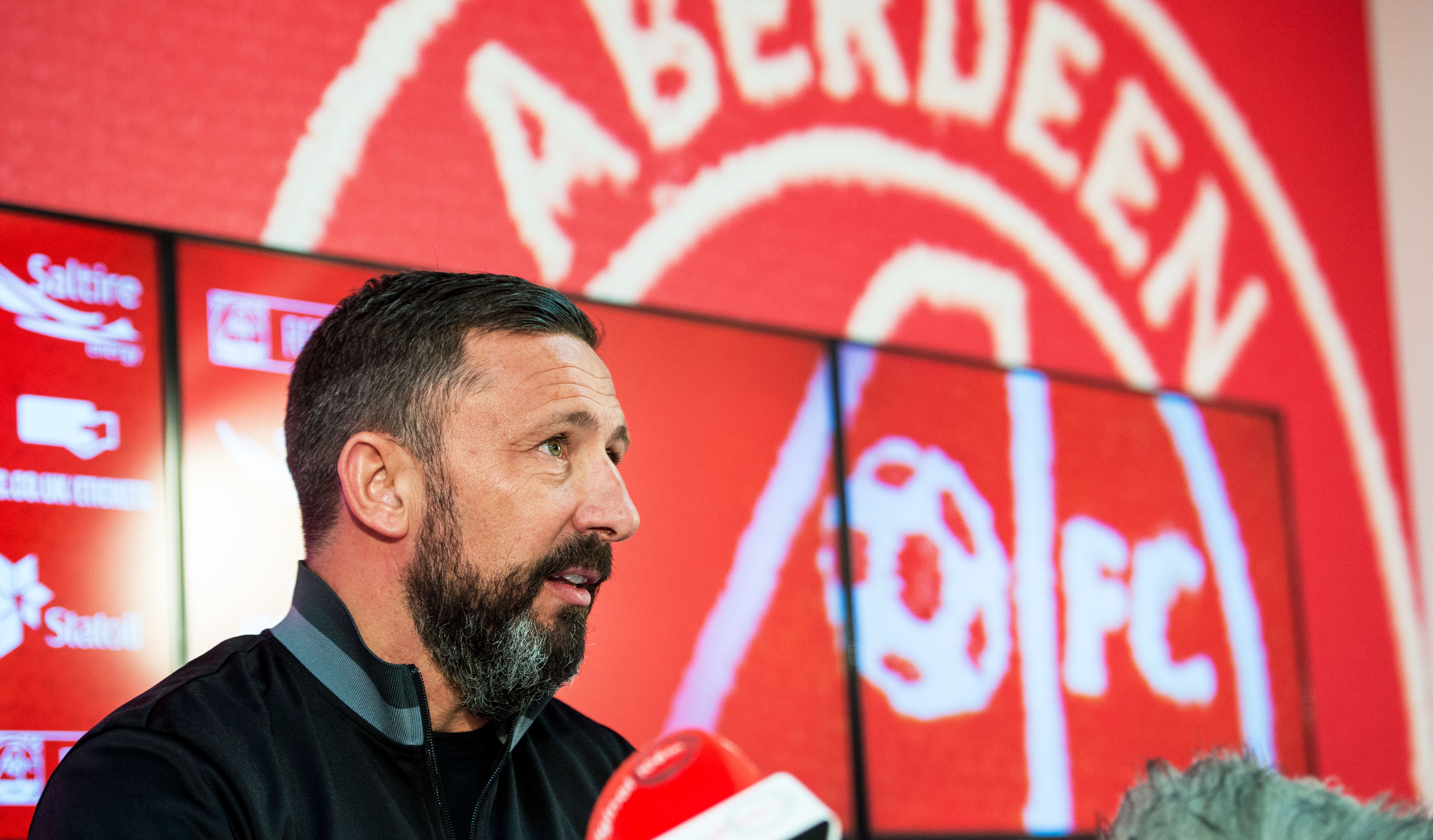 “Ultimately, we went to Celtic to get a result and we are disappointed that we have not managed to carry that through. In terms of the organisation of the team and the tenacity of the team, the aggression of the team, it was everything we wanted. We have to recognise that when you go to Celtic Park you have to get the balance right between attacking and defending. Celtic had one shot on target the whole 90 minutes. That is not a stat you see with this Celtic team. Joe Lewis has had nothing to do. We are not dealing with a free kick away from getting a point which I think we deserved. I thought we did so many things right in the game. But from an attacking point of view I did not think we did enough and therefore did not do enough to win the game.

“We are disappointed we have not carried out a perfect night’s work.

“I always say what good job Alan Archibald has done. You can always see they are a side who are well coached and there is always a thought to what they are trying to do. They jump between a back four and a back five. They have players who are flexible enough to do both. Alan like any manager is looking for that attacking threat but there is no doubt they make it difficult for any opponent. They are a physical side. They are very organised and disciplined with their work.

“I believe this is the best squad Alan has had since he has been there. “We have a job to do to try and break them down. They will come here to keep the crowd quiet so our supporters have a part to play and recognise that patience and encouragement is part of it for us tomorrow against a good Thistle team. We have a job to do on the pitch for them.

“Hopefully we are good enough to overcome the challenge.

“We have to get on the front foot and be really positive. We have to play at a good tempo when we get the chance to do that. But there is always an opponent trying to stop you being that team. We have played well against Thistle this season and have a decent record against them but every game has been hard fought. I would not expect anything different tomorrow.

“Team news, everyone is fit and Ryan Christie comes back into it. Connor McLennan is also added to the squad. There are a few bumps and bruises from the other night but we are good to go.

“We have a small squad and when you go to Celtic Park they put a demand you on probably more than any other team. We are a fit team though and just off the back of a break so I don’t see that being an issue. We were on a good run so the players will just be eager to get back on the pitch. February is a challenging month but I don’t see it being an issue tomorrow.”

Finally, the manger had this to say about the latest contract news speculation in the papers:

“I have said before that all the players out of contract have been spoken to. The ones who are out of contract in 18 months we have also spoken to them. There is nothing new to report. Talks have been on going with Jonny and others over the past few months. I think the fact Jonny has not moved in the transfer window, maybe people are putting two and two together.”

Derek McInnes named an unchanged team to the side that were narrowly beaten at Celtic Park on Wednesday night. That is the seventh game in a row the same starting XI have played – the last time that happened was midway through the 1975-76 season. 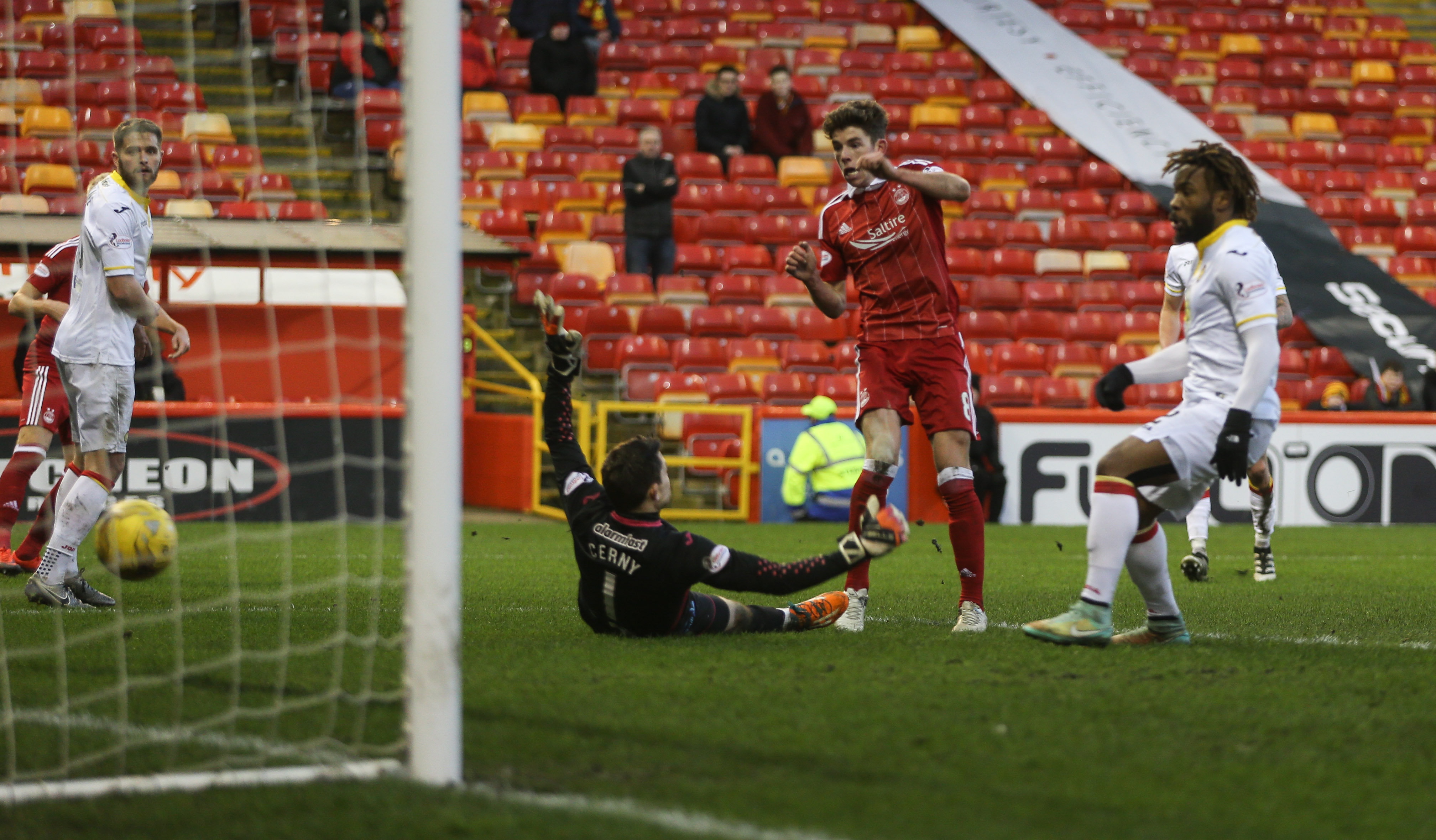 Derek McInnes named an unchanged team to the side that were narrowly beaten at Celtic Park on Wednesday night. That is the seventh game in a row the same starting XI have played – the last time that happened was midway through the 1975-76 season.

Both sides spent the opening stages of the game trying to get used to the wind which was making it very difficult to play football. As a result the goalkeepers didn't have much to do in the first 10 minutes.

The first chance came after 11 minutes when Ash Taylor's long ball from defence was won in the air by Adam Rooney. Hayes got into it, nicely flicking the ball into the path of Kenny McLean. Kenny still had a lot to do to beat the two centre backs but managed to send a drive at goal which Cerny was forced to save. It was a well hit shot but straight at the keeper.

After 20 minutes the Dons came close again when Jonny Hayes crossed the ball into the box. Adam Rooney tried a spectacular overhead kick, but couldn't properly connect. The ball ran through to Andy Considine at the back post but he could only tap the ball towards Cerny.

Thistle to their credit came to play football, and were nearly ahead after 23 minutes when after a fine move Barton played in Christie Elliot who controlled the ball well but could not get any power in his shot. Niall McGinn deserves enormous credit for tracking the run and doing enough to put him off.

Aberdeen won their first corner on 26 minutes and from it had their best chance after 26 minutes when Niall McGinn's corner was well delivered from the right. Ash Taylor had a free header but couldn't divert the ball on target.

A couple of minutes later Kenny McLean had another chance to open the scoring, when he got in front of his man but couldn't turn the ball in at the front post from Hayes’ cross.

Graeme Shinnie had a long shot saved from outside the box after 38 minutes, with Rooney unable to get onto the rebound. The Dons looked confident shooting from far out, and with the wind playing havoc with long shots it was a good ploy.

That was to be the last chance of the half with Aberdeen shading it on possession and attempts on goal, but Thistle played some decent football.

Conditions seemed to improve over the break, slightly, and Thistle had a great chance to go in front when

Edwards got on the end of a cross to the back post. The striker was under pressure from two red shirts, meaning he couldn't get the direction on his header needed but he really should have hit the target.

Graeme Shinnie then got to the by-line but from a promising position his cut back failed to find Rooney.

Of the two teams it was Thistle that made the more encouraging start to the half and the Aberdeen performance looked flat. The exertions of Wednesday night were catching up on some of the players and they could not get the tempo up.

With just over an hour gone Derek McInnes made a double change. And it was an extremely brave one. Stockley and Christie came on for Reynolds and Logan. A very attacking substitution consider Thistle were looking the more likely to score at this point.

Eventually Aberdeen went to a back three with Jonny and Niall playing as wing backs.

The Dons were needing to try and make something happen. After 70 minutes Hayes spun from wide on the left and hit a ferocious drive towards goal. Cerny pushed did well to get down and knock the ball behind. From the corner, Niall McGinn's in-swinger was met by the head of Jayden Stockley who was completely unmarked and powered the ball into the net. Relief amongst the fans as it was beginning to look like being one of those frustrating afternoons. Credit to Jayden for a fine header. Another assist for Niall and also Jonny deserves a mention for having a shot from distance which led to the goal.

Adam Rooney nearly doubled the lead two minutes later when a long ball forward allowed the Irishman through on goal. Rooney didn't have much ground on the defence and after heading the ball down was forced to shoot from early from far out. He spotted Cerny was off his line and his low shot almost sneaked past the keeper. Decent save in the end.

Thistle kept the pressure on when substitute Azeez floated past the Dons defence when a clearance from deep evaded everybody. The striker managed to get a shot away but it came off the outside of the post. He did well to create the chance but really should have scored.

The Dons boss made his final change with less than 10 minutes to go, bringing on Anthony O'Connor to bolster the defence. Off came Adam Rooney leaving Stockley up front on his own.

With five minutes left to play Thistle started to press higher. Cerny's free kick from the half way line made its way through to Azeez who made a hash of the shot from a tight angle when he should have squared it to a team mate.

The two previous meetings between the sides had seen the Dons hanging on in the closing stages and this one looked no different when four minutes of added time was signalled.

However, in the middle of stoppage time the Dons looked comfortable in possession and killed the game off when Jayden Stockley unselfishly flicked the ball across goal for fellow substitute Ryan Christie to finish a move he started. The on-loan Celtic man was dancing for joy with his first goal at Pittodrie. He has a fine game.

That was the last action of the game, with a nice patient display from the Dons giving them all three points in a very hard fought encounter.

The manager deserves huge praise for his tactic change. As does Ryan Jack who was outstanding this afternoon and was an obvious candidate for man of the match.