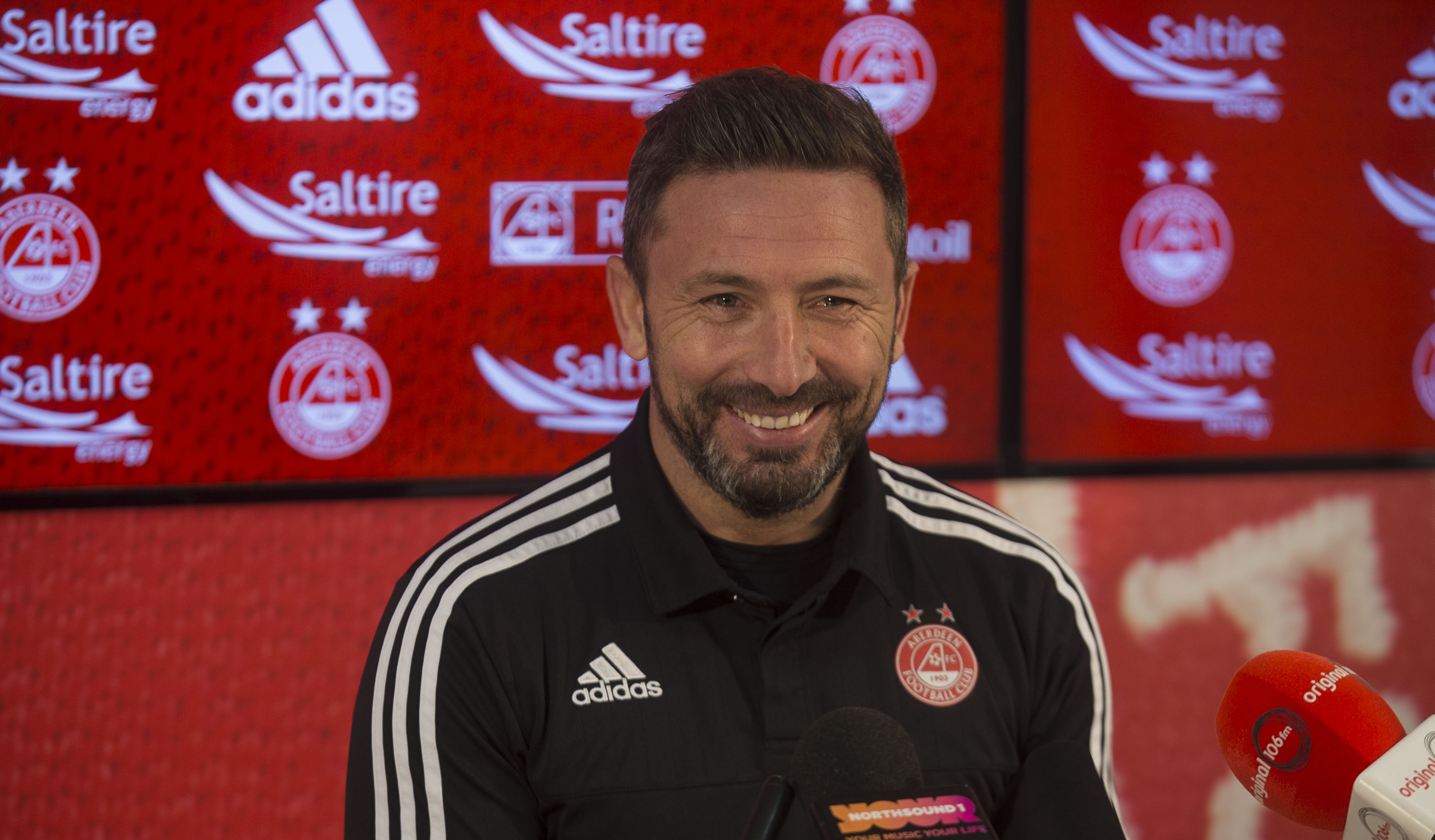 “I think the form going into this is not ideal after two defeats. The defeat at Hamilton, with the decision that went against us, and also the performance was disappointing after the levels we had been at. Against a good Celtic team we were still in the game after they had passed up the opportunity to get that second goal to potentially kill the match. I was delighted with the way the players finished.

“So we are looking to go and try and get some impetus again which we are more than capable of doing.

“Friday has all the ingredients to make it feel like a big game.

“We have a good record against them but I think this Partick team are different to others. They are bigger in size, they have a different way of playing, and I think what Alan has managed to put together a really experienced squad.

“I think Thistle are good enough to be a top six team. As I say they have put together a decent squad and Alan is a good manager there. We are going to have to play very well to get the job done.

“So it think it will be tough. Going away from home is always tough especially when you are playing a team with a bit of confidence which they have got after their two previous results. That makes it more of a challenge for us but we have to go there and remember what we are good at. We have to compete obviously, pass the ball well and try and be bright. We want to cause them problems and have the players to do that.

“When I was a player I wanted to play every game.

“Players want to play every game but I think players understand in a three game week that we have to try and utilise the squad. I can’t on one hand say it is great to have options and then not look to use them. “Wes had done well previously at Celtic Park and brought pace to the team. Jayden is a good penalty box striker and we have Adam as well. All three have different attributes. I look at the opposition and I have the benefit of seeing the players in training. When you play against a team like Celtic you pick a team to play against them and try to get the balance right between attacking and defending.

“After the changes were made in the second half that helped us more in an attacking sense but there was a period between the 60th minute and the 80th minute where Joe Lewis has pulled off a number of saves because we were more vulnerable to lose a goal.  So, it is all about trying to get that balance right between attacking and defending and making sure you are still in the game.

“On Friday, I will pick the best team that I think can get the job done. Pick players who are in form and a system to play against there’s. That is my job. Sometimes the most obvious team is not the right team. Sometimes as a manager you get it right, sometimes you don’t.

“We have now played Celtic twice and have a game in hand over a few others. I think that we should not get too caught up with the table at the moment. For now, it is just about getting the next three points. We have to manage our own game and start accumulating points again. The table will start to pan out over the Christmas period.

“There is a lot going on when you are in a cup final. It is there, you cannot ignore it. At the same the professionals at the club have to get on with the job in hand. We have two very tough away games prior to the final so there is work to do.

“Team news, Ash is still not fully there yet. Hopefully he can train tomorrow and we are giving him every chance to be fit. Defensively we have not lost too many goals so as a team I have been pleased with the defence but Ash gives us a real presence. We have a squad who can cope but it would be good to get him back.”

Derek McInnes made three changes to the side which narrowly went down to Celtic. Maddison, Rooney and Stockley all came into the starting XI. 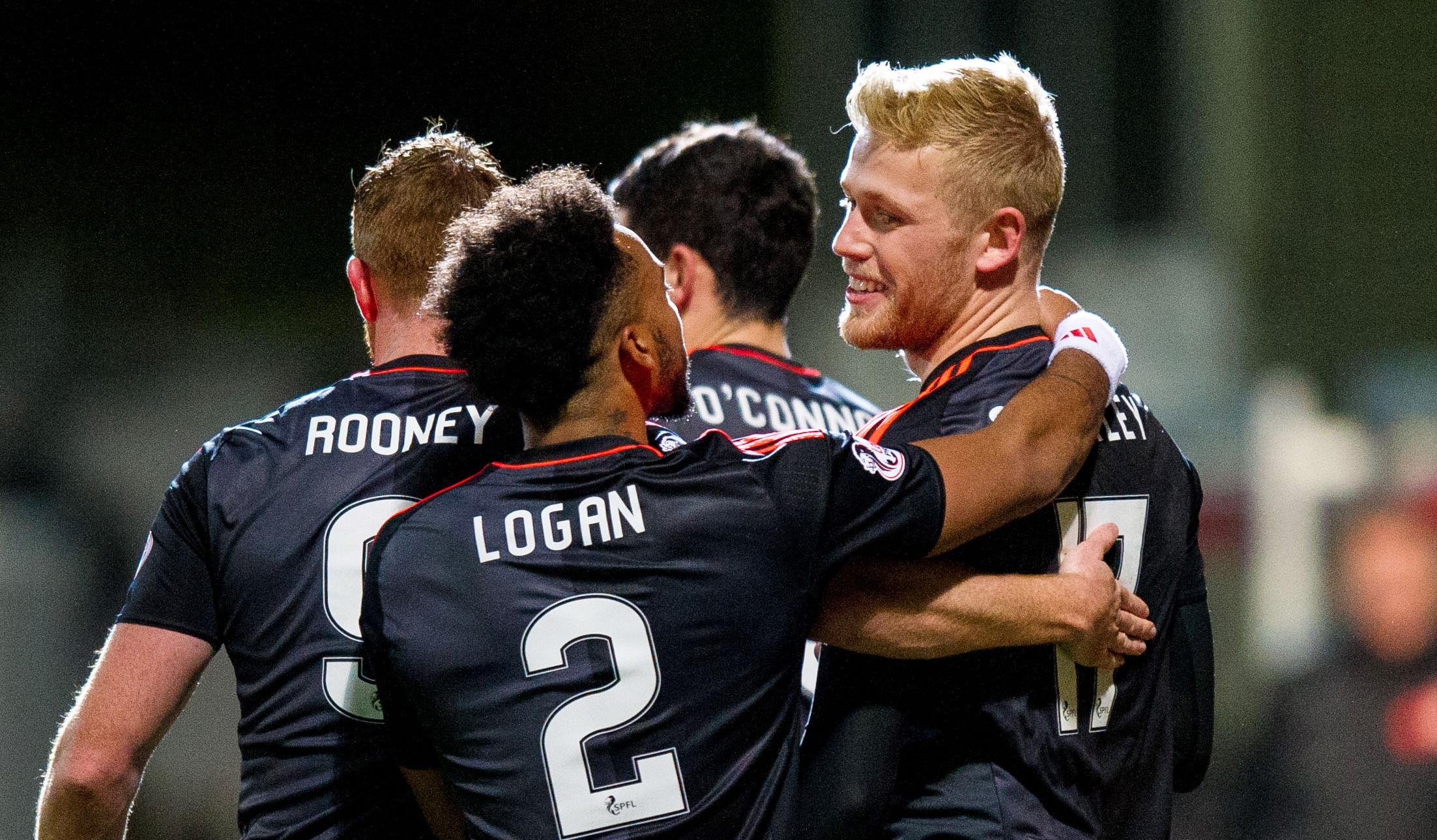 Derek McInnes made three changes to the side which narrowly went down to Celtic. Maddison, Rooney and Stockley all came into the starting XI.

In the fifth minute Maddison picked up the ball in space. His pass to Stockley was just behind the striker but Jayden managed to hook the ball to Shinnie, who was playing on the left side this evening, and from the by-line he put over a dangerous ball. The Dons kept possession and Hayes then put a ball in from the right but it was slightly over hit. Then after a decent move Shinnie found Jack inside the area. The skipper tried a back heeler, Ryan probably did not realise he had more time and space than he thought.

It was all Aberdeen in the opening stages and they had started at a good tempo.

On 14 minutes a quick break saw Logan find McLean and he in turn played a neat pass to release Rooney. His low cross led to the first corner, which in turn led to a second corner. The ball was headed about the area and in the end the keeper just grabbed the ball before Considine could get a touch.

On 20 minutes a couple of good crosses from Hayes, who was now over on the left, but on both occasion’s they were very well defended. Two minutes later Stockley, first of all did well to win the ball in midfield after a good tackle, and then Jack found him inside the area. The striker managed to turn and get in a low shot which lacked enough power and Stuckmann was able to get down and save.

Then out of nothing Thistle had a golden opportunity to take the lead.

The powerful Azeez managed to lose Considine and the striker was one on one with Lewis. The ball sat up a little so he tried to lob the Dons number one and in the end Joe was able to make a comfortable save.

A warning for the Dons who up to that point had looked in complete control. The Dons had a lot of patient build up
play but were struggling to get in behind a well organised defence.

On the half hour mark a good build up saw Kris Doolan freed on the left and Considine did very well to defend the situation at the near post at the expense of a corner. The home side have a lot of height in their side so set-pieces were always going to be dangerous all evening. On this occasion Stockley did well to head the ball clear before Azeez put the ball over the bar with a bicycle kick.

Five minutes later they forced a second corner. This time Aberdeen did not deal with it. The ball went right across the six yard box and Devine coming in at the back post probably should have scored. Then at the other end Jonny Hayes had a shot from distance which caused the Thistle keeper real concern, rightly so as the swerving effort just went past his right hand post.

The game was slightly more even now but in the 38th minute Aberdeen took the lead. The goal came from a well worked free kick. Maddison played it deep looking for Considine who won his header to knock the ball down to Rooney, who in turn cushioned the ball into the path of Anthony O’Connor and the Irishman swept the ball home with a good finish. It was his first goal as an Aberdeen player and he certainly enjoyed it.

In the 40th minute delightful skill from James Maddison had the 1,365 Aberdeen fans on their feet applauding his brilliance but his ball though to Rooney was just over hit. Then once again out of nothing Thistle had a great chance but Joe Lewis did very well to block a shot from Doolan which keep the Dons ahead at the interval.

A chance for Jayden Stockley right at the start of the second half when Rooney played in a great cross looking for him. In the end Liam Lindsay did very well to out jump the striker. At the other end a half chance then for Doolan but his low shot was easily saved by Lewis.

In the 50th minute Lewis did very well to turn a deflected cross over the bar. But from the resulting corner Thistle equalised. The ball was floated over by Welsh and Adam Barton outjumped McLean and his header had enough on it to beat Lewis at his post. All night Thistle were a threat from dead ball situations but the Dons will still have been disappointed conceding direct from a corner.

Aberdeen to their credit responded brilliantly and retook the lead four minutes later. And what a delightful goal it was. James Maddison showed his class but picking out the run of Stockley on the half way line. The big striker was half clear but he knew he did not have the pace to beat the defenders so with the keeper off his line his sent a superb chip into the far corner. It was a superb finish. Jayden deserved his goal as he put in a tremendous all round performance this evening.

The Dons took control after the goal and went looking for a third.

A Maddison free kick was flicked on by Consdine and Rooney almost got a touch to divert the ball past the keeper. Then back came Thistle. From a corner Azeez swept the ball over the bar with a first-time effort. Better defending this time though as was put under a lot of pressure.

Just after the hour mark Stockley put over a great ball with his left foot, and then Shinnie did the same but there were no takers in the box. Then a Maddison free kick was just too long for Rooney. O’Connor did well to keep the move alive before a low Shinnie shot was well held by Stuckmann.

Aberdeen were once again on top. They were winning most of the 50-50 battles in the middle of the park. Ryan Jack impressed and gave the Dons some control.

But some careless possession from the Dons allowed Thistle to win a corner and then a free kick in a dangerous position. The ball was played to the back post and Thistle had worked it so Abdul Osman was one on one with Jayden Stockley. The striker initial did well before Osman went to ground and thankfully Bobby Madden waved away the penalty appeals. It was never a penalty.

Aberdeen, who had brought on McGinn and then Reynolds in the closing stages, continued looking for a third goal in the final ten minutes but Thistle did have a couple of half chances. In the 88th minute substitute McDaid knocked it down for Chris Erskine but his shot was straight at Lewis. Then in the third minute of added time Erskine again found himself in space in the area and had a sight of goal but again Lewis’ positioning was spot on.

Despite those half chances a thoroughly deserved win for the Dons who played some great football at times.