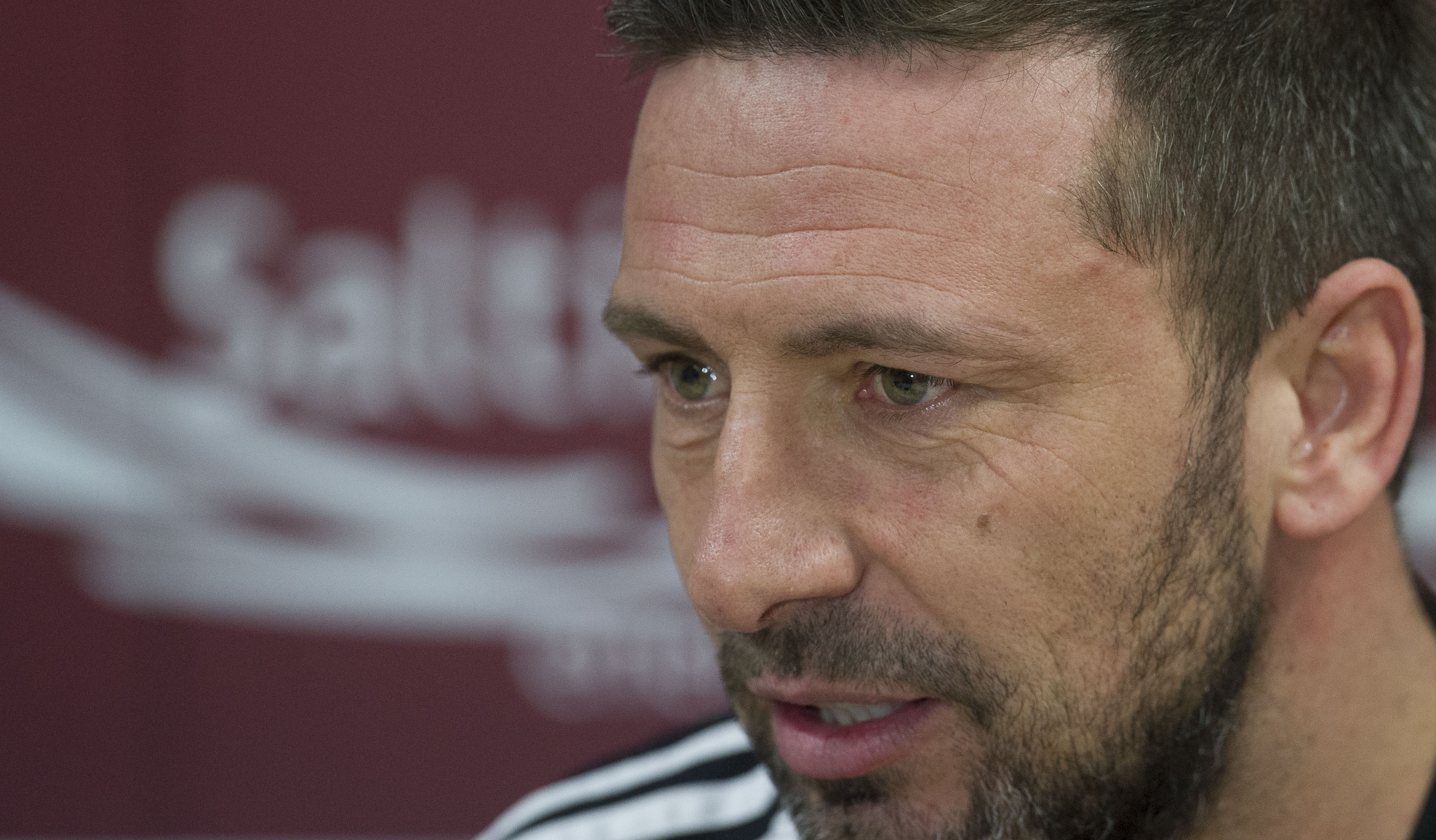 “It will be a big occasion as Russell Anderson heads off into retirement, but more than that, I think we’ve got a very competitive game ahead of us.

“Russell will start on Sunday and lead the team out.

“It must be said that while it is an important game and a proper game as St Johnstone need to win, which I am pleased about, the day will belong to Russell. It is important Russell has the opportunity to say his goodbyes to the fans on the pitch. He is deserving of that and he is also deserving of a big crowd for his efforts and what he has given to the club. I am sure the fans will turn out to see Russell in an Aberdeen shirt for the last time.

“The crowd have been brilliant for us all season and I don’t expect them to be any different on Sunday. We say it week in and week out, but our supporters have been fantastic this season. Crowds are up at home, there is more noise at home games so I thank you all for that. All over the country, the Red Army is there for us. I know the players always appreciate that as do I and Tony, but we need to make sure we continue to put an Aberdeen team on the pitch deserving of that.

“We will be trying to win the game so Russell can leave as a winning captain. It would be fitting if we did that.

“Some of the young boys have been brought into the squad. It will be a good opportunity for the fans to see some of the youngsters who we have high hopes for.
We’ve had an obligation to keep winning games over the last few weeks, but there has been a need and desire from me to see some of these younger players in action too – but they’ve got to earn that opportunity. Young Frank Ross, Daniel Harvie and Michael Rose have been in and around the squad, Scott Wright has returned to fitness and form, so there are players there that we want to see possibly involved.

“I would imagine there would be at least a couple of new players coming in over the summer. We are in the fortunate position where we have the majority of the squad nailed down so we can look forward to the first game in Europe with a lot of confidence. If we can add to the squad before pre-season then great, I am confident we will be able to agree things with one or two but if it does not happen before the first game at the start of July, the transfer window does not close for another two months beyond that.  We have the luxury of being able to make some good decisions without having just to take bodies in. We will try and bring in players who will give something different.”

“Sunday will be an emotional day when it comes round. At the moment it feels like any other week with a normal training schedule but when Sunday comes around, it will hit me that it is my final game.

We'll have live & biased commentary from Pittodrie on REDTV from 12.20pm on Saturday with updates on Twitter (@aberdeenfc) and afc.co.uk. Highlights and reaction post match. 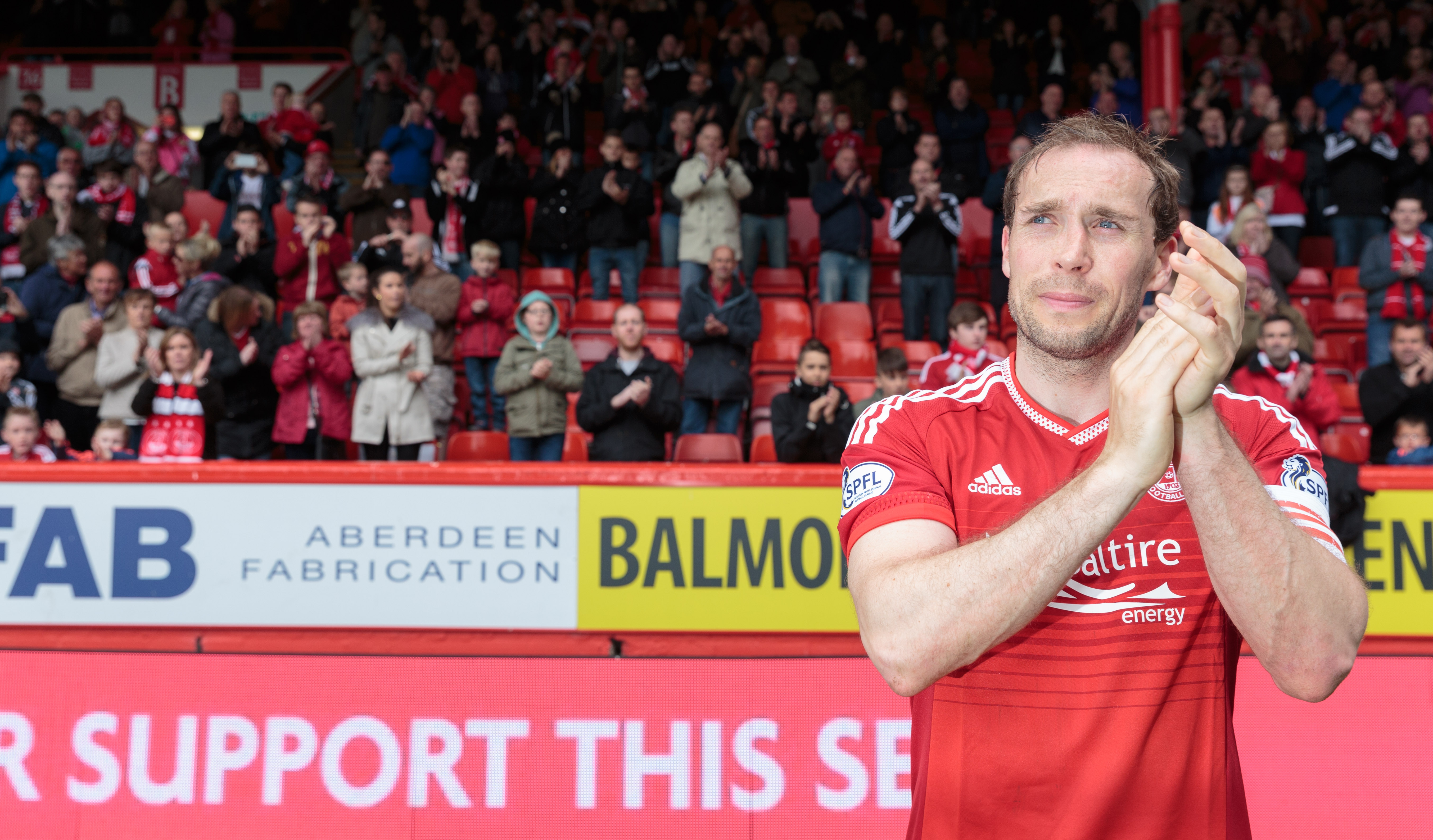 Russell Anderson played his last game for Aberdeen at an emotional Pittodrie this afternoon. Before the game the Dons skipper was given a guard of honour by both sets of players and a great reception from both sets of fans.

St Johnstone won the game 1-0 which means they finish fourth in table and possibly gives them a place in Europe, depending if ICT win the Scottish Cup next week.

The game itself was a tight affair with little between the sides and few attempts at goal. Considering Aberdeen had such a makeshift side out they did very well to compete for the full 90 and a number of the development side impressed. Hayes came the closest to scoring in the first half when he hit the post. In the second half there was a final moment of controversy for the season when Cammy Smith was brought down just outside the box by the last defender. It would have been a certain red card but the referee William Collum felt Scobbie got a touch – which he did not. The only goal came after 70 minutes when substitute Chris Kane, with his first touch of the ball, was put through and placed the ball under Scott Brown.

Aberdeen lined up in a 3-5-2 formation with Brown in goal, Shaughnessy at right wing back, Taylor, Anderson and Reynolds forming the back three and Considine was the left wing back. Low, Pawlett and Smith were in the middle of the park with Hayes and McGinn upfront.

The Dons in their new kit got the game underway.

An early shot from Cammy Smith was blocked by Scobbie and went out for a corner. Then three minutes later in the other penalty box shouts for a penalty from the visitors as Cammy made a challenge in the area but nothing was given by Willie Collum. The St Johnstone players were not happy but the referee was very well position to make the decision.

The game had not caught fire in the first twenty minutes. It was very much being played at an end of season pace, which was a bit of a surprise considering what was at stake for the away side.

On 22 minutes a high ball into the Aberdeen penalty box was headed clear to Murray Davidson at the edge of the area but he got caught in two minds about what to do and did nothing in the end.

Then finally a spark.

On 26 minutes an excellent little break by the visitors. Michael O’Halloran who has good pace beat Anderson and got a shot away before Brown could get out but his shot found the side netting. A let off for the Dons.

Then a chance of the Dons two minutes later. St Johnstone gave away a needless corner. The ball was crossed by Low and found Smith who managed to get his shot past the keeper but he did not get hold of it as well as he would have liked and Steven Anderson was able to block the shot on the line before the ball hit off Reynolds and landed in Mannus’ arms.

A good move from the Dons on the half hour mark, McGinn put in a great ball to the front post but no one made a run to that area and in the end in was an easy catch for Mannus.

A few minutes later Steven McLean went down in the box after a challenge from Taylor. The ex Dons player was booked for diving and to be fair to the striker he never protested against the decision. Steven who is such a good battering ram would need to watch his step now.

Delightful play by Hayes on the edge of the area engineered room for a shot. The ball appeared to be heading into the bottom corner but a nick off Steven Anderson deflected the ball behind for the fourth corner of the game. Corner number five came shortly afterwards but the Dons could do nothing with the set-piece. Their corners in recent weeks have been slightly disappointing.

On 40 minutes the Dons broke superbly, McGinn found Hayes who ran towards goal but his shot was saved by Mannus. In the build-up McGinn was cynically fouled but Collum took no action.

On the stroke of the interval the best chance of the half. More good play by the home side, Low found Hayes whose shot was touched onto the post by Mannus. It was actually a very good save by the keeper.

Early in the second half there was a change for the Dons and Nicky Low received a standing ovation- as he was replaced by Lawrence Shankland. In the 52 minute the main talking point. Cammy Smith and Shankland combined and Smith did well to make a strong run towards goal, he got across the last defender so when Scobbie tried to tackle him and Smith went down just outside the area it looked a clear foul and obvious red card. However the referee waved play on. A major break for the Saints.

On 54 minutes Mark Reynolds left the field injured and Scott Wright replaced him. With Mark off it meant Russell would have to play the full 90.

On the hour mark there was a clash between Davidson and Pawlett and then Davidson and Hayes which certainly helped bring the crowd to life. On 63 minutes Brian Graham shot narrowly wide from the edge of the box. A minute later Russell Anderson was controversially booked on his final appearance at Pittodrie – with his first foul.

The game started to open up. There was space at the back as St Johnstone went for it. With United 3-0 up they had no choice but to go for it. Shankland and Smith were linking up well and Wright’s pace was also causing problems.

On 65 minutes Smith and Shankland pressurised the Saints and Shankland drove forward before his weak shot was saved. On 70 minutes Chris Kane came on for McLean and within 20 seconds, and with his first touch of the ball, he got in behind the Aberdeen defence and his low shot went under Brown into the net.

After that St Johnstone sat in and with bodies behind the ball they were always going to be difficult to break down. They have defended well all season. On 78 minutes Joe Shaughnessy, soon to be a Saint, hit a superb strike from about 35 yards that almost caught out Mannus. I am not sure he would have been very popular with his new team mates if that one went in!

On minutes 80 minutes Frank Ross came on for Smith and he looked very lively. The Dons forced a number of corners but were unable to create any clear cut chances.