Andrew Considine missed the game due to a hand injury. Greg Tansey also missed out after his hernia operation so Greg Stewart came into the side, as did Adam Rooney. 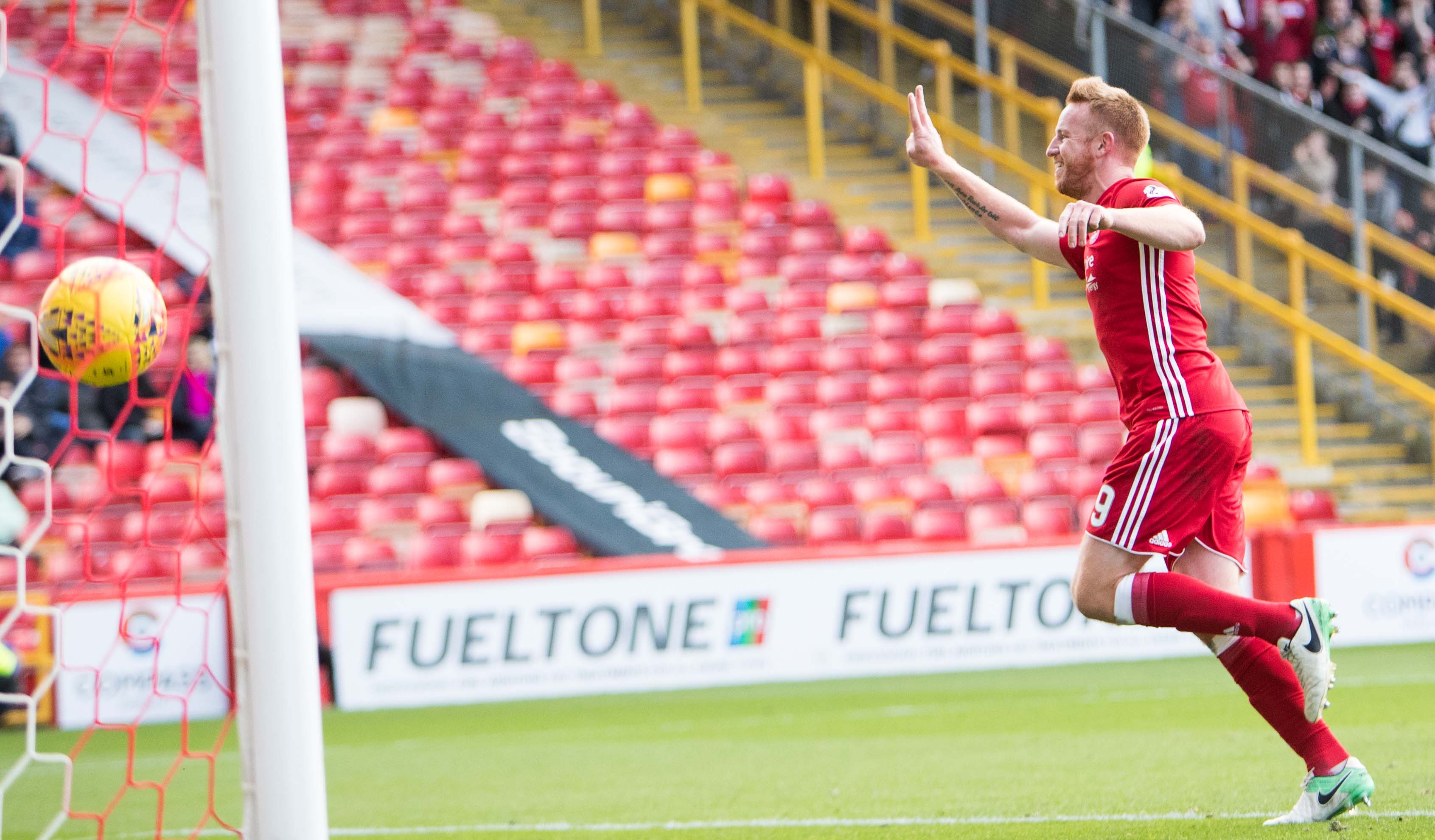 Andrew Considine missed the game due to a hand injury. Greg Tansey also missed out after his hernia operation so Greg Stewart came into the side, as did Adam Rooney.

In the early stages of the game the ball was in the air for the majority of the time. In the fourth minute Aberdeen finally got the ball down and worked a move on the left. McLean made a good overlapping run and received the ball from Shinnie but his cross just curved out of play.

Then in the seventh minute Greg Stewart won a free kick in a good area. As the big players from the back started to make their way forward, Kenny McLean took it quickly. He played it to May and with the St Johnstone defence out of position he delivered a superb ball which Rooney headed home. It was brilliant thinking from McLean and for the second home game in a row Aberdeen had the perfect start.

This time they went on and made it count.

In the tenth minute Aberdeen again profited down the left. Graeme Shinnie beat a couple of players before a low shot had to be saved by Mannus. The keeper spilled the ball for the first corner of the game. Aberdeen forced a second and then should have had free kick on the edge of the area when Shinnie was taken down. Although he was playing at left back today, the skipper was still getting forward as often as he could.

O’Connor was forced into a good block after the Saints first attack before Christie produced a great piece of skill and then put over a deep cross. The ball came back over from the right and fell for Rooney. His shot was deflected and spun up nicely for the keeper.

Aberdeen continued to press. Shay smashed over a cross which fell kindly for the visitors – it could have gone anywhere.

After 17 minutes Aberdeen won another corner. Christie played a short one to May who crossed brilliantly again for O’Connor who got up well and headed it goalward and Rooney was on the goal line to knock home his second. Once again the striker was in exactly the right place at the right time.

The scoreline did not flatter the Dons who had been outstanding in the opening period.

In the 20th minute St Johnstone worked a good opening after a strong run from Stefan Scougall. A dangerous cross thankfully ran all the way through to Christie. After 26 minutes Greg Stewart burst forward. The winger was always looking to get involved in the opening stages. On this occasion his shot was off target.

Rooney, on a hat-trick, was working tirelessly for his side. This was highlighted when made a good defensive header as St Johnstone threw a dangerous ball into the area. The Saints were trying hard to get back into the game but the Aberdeen defence, with O’Connor protecting, looked solid.

After 33 minutes Christie again caused problems. Ryan had some lovely little touches. He found Logan who played in Stewart and his cross was decent and not far away from Rooney. Mannus managed to reach up and grab the ball.

On the stroke of half time Aberdeen put together a nice move. Christie and Rooney played in Shinnie. He played it sideways to Christie and his first time shot with the outside of his foot was well saved by Mannus. The keeper did not see the shot till late as it came through the legs of a couple of players.

St Johnstone came out strongly at the start of the second half. Steven McLean had a shot which was on target but hit his own man Scougall and deflected harmlessly wide.

On 50 minutes Stevie May was taken down inside the area. It looked an obvious foul as he was clipped from behind but referee Beaton waved play on. A minute after the referee did award Aberdeen a free kick about 25 yards out. May took it. From a very straight run up he beat the wall but Mannus was well positioned.

Before the hour mark Aberdeen had another free kick out on the right. The ball in was cleared and St Johnstone broke dangerously, Shinne was booked for a foul as he scrambled back. Aberdeen cleared the danger and after three headers found themselves up the park. Shinnie put over a ball which was very well cleared by Joe Shaughnessy at the near post. Rooney was waiting to pounce.

That was the only real action for a spell as the game became a physical battle.

On the hour mark Davidson appeared to catch Shinnie with a stray arm by the officials were happy just to award a free kick. Substitute Chris Millar moments later was then booked for a foul on the Aberdeen captain who was everywhere this afternoon. McKenna won a good header inside the area but the knockdown was too strong for his teammates.

At this point St Johnstone were not really committing too many bodies forward and Aberdeen were happy to keep a solid back line. I did not make for great viewing but the Dons were managing the game well. May and Rooney almost combined on a couple of occasions in the second half, before on 71 minutes Christie played in May and his ball across was not far from Adam.

On 78 minutes Christie went down in the area and after a pause, this time referee Beaton pointed to the spot. Adam Rooney stepped forward and coolly slotted home, putting the keeper the wrong way. That was his hat-trick – his fourth as an Aberdeen player.

After the goal Scott Wright replaced Stewart and O’Connor was booked for a foul on Millar. With eight minutes to go the Saints almost got a consolation after Comrie got in behind. His cutback was knocked on by Davidson but on the line Cummins back header went over the bar.

It was then Aberdeen who had a couple of chances to add to the scoreline before the full-time whistle.
Frank Ross replaced Christie and with his first touch he found himself in the centre of the area unmarked. His shot was not struck as sweetly as he would have liked but positioned well so it beat the keeper but unfortunately cannoned off the post. Ross lit up the game in the final few minutes with his direct running. He found Maynard, who had come on for Stevie May, the striker worked room for the shot by cutting back inside but could not beat Mannus at his near post.

Arguably the best performance of the season so far, things are coming together nicely in the league as the Dons go into the international break joint top of the table.