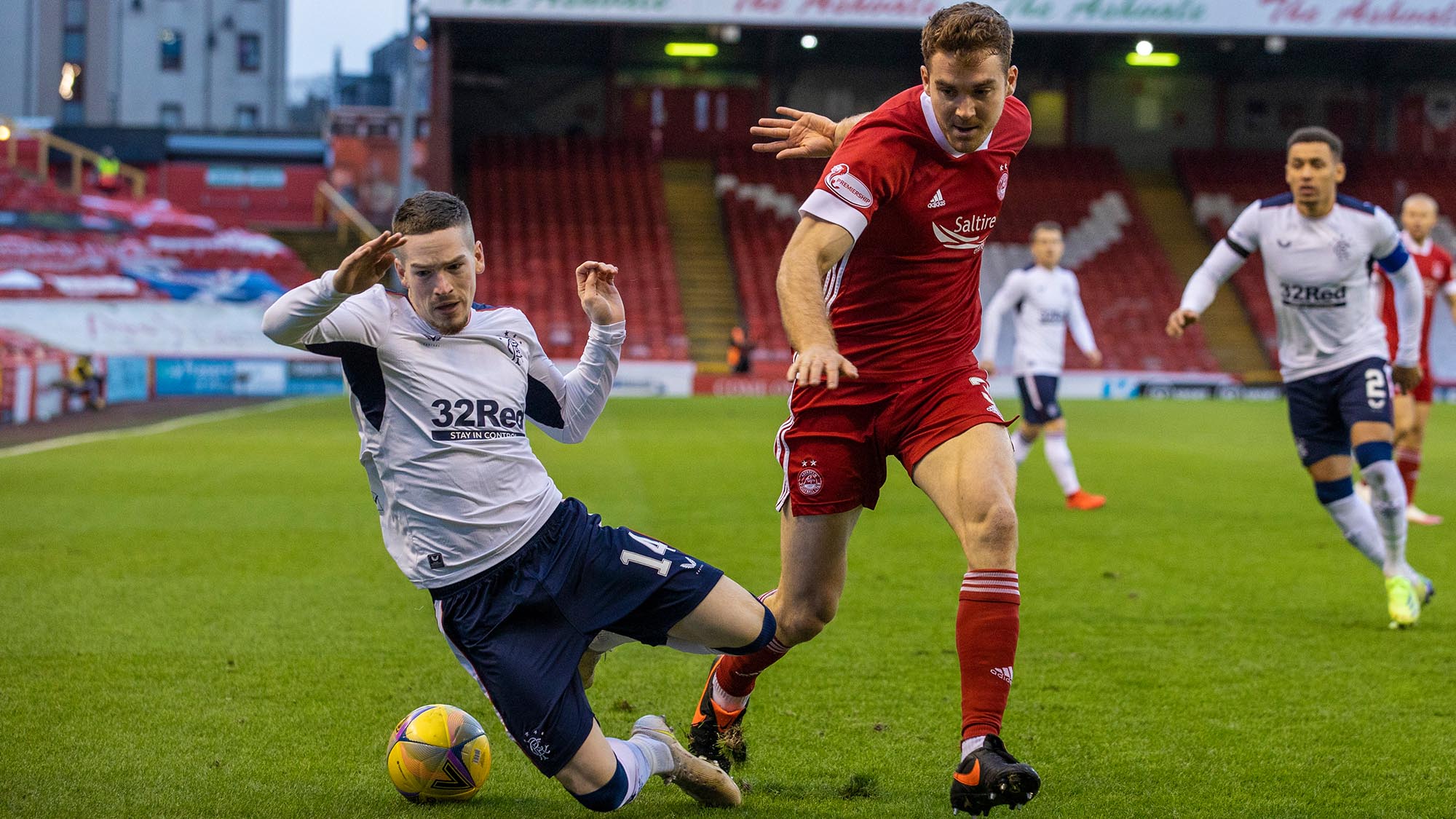 The manager sat down with the media, via Zoom, on Friday lunchtime to preview our final match of the season. 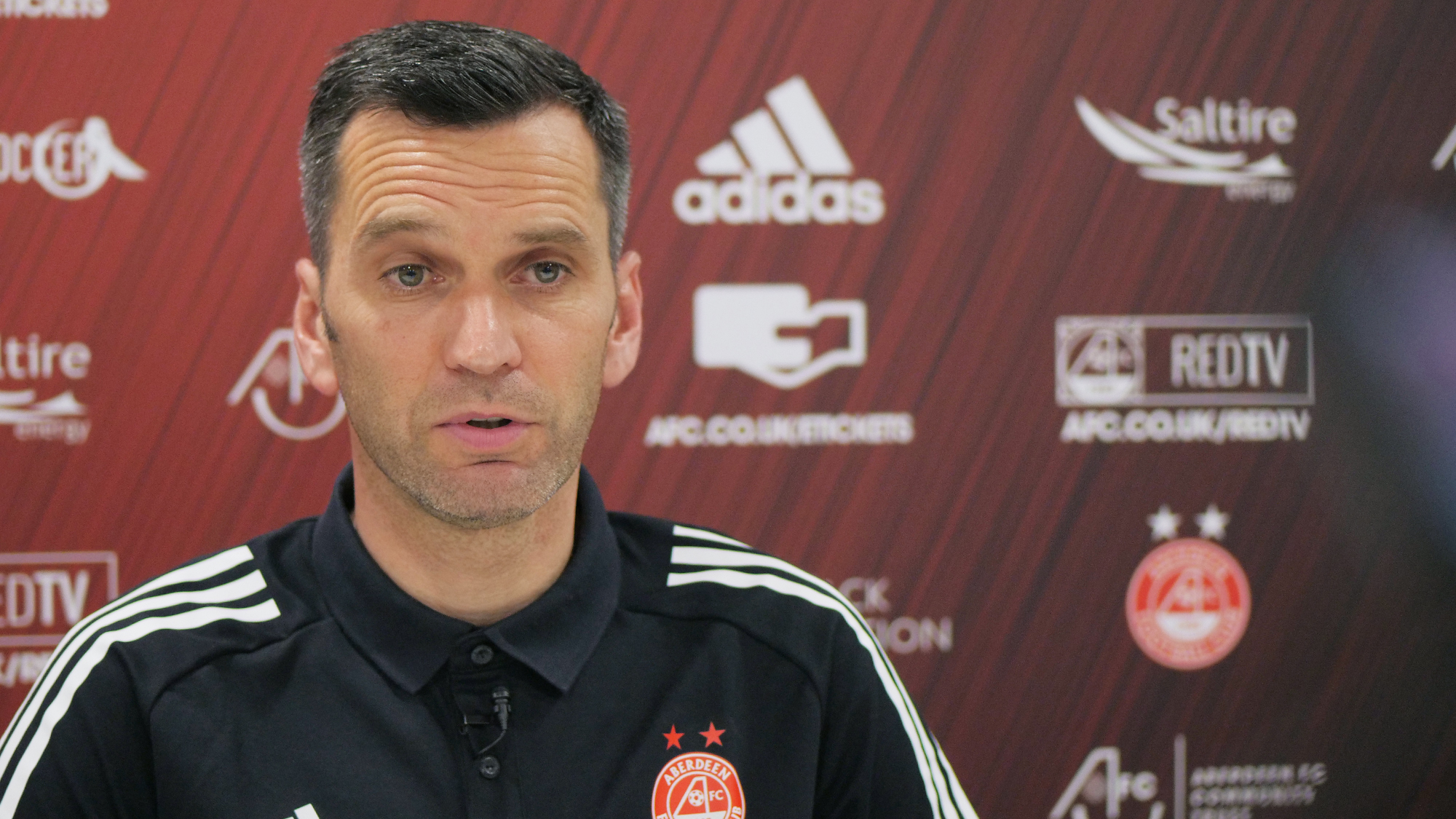 “There is an opportunity for us to go and play a game against a team who have proved themselves to be the best team in the country this year. It is a chance for us to go and test ourselves in that environment against that group of players. We know what it means to them to win the game so it is important that we try to get the three points when we go there. Spoiling parties is a by product of winning a game of football which is our aim at the weekend.

“We are going to go there and try to win a game of football. We know what we are up against. We have a group of players who are hungry, that are going to try there and win. It will let us see the players mentality. The attitude of the players has been phenomenal since we came in and I don’t see it being any different at the weekend.

“We only focus on Aberdeen. We will be arriving into a crowd but it is what it is. They are celebrating something that they have waited a while for. Our concern is Aberdeen, it always has been, always will be. 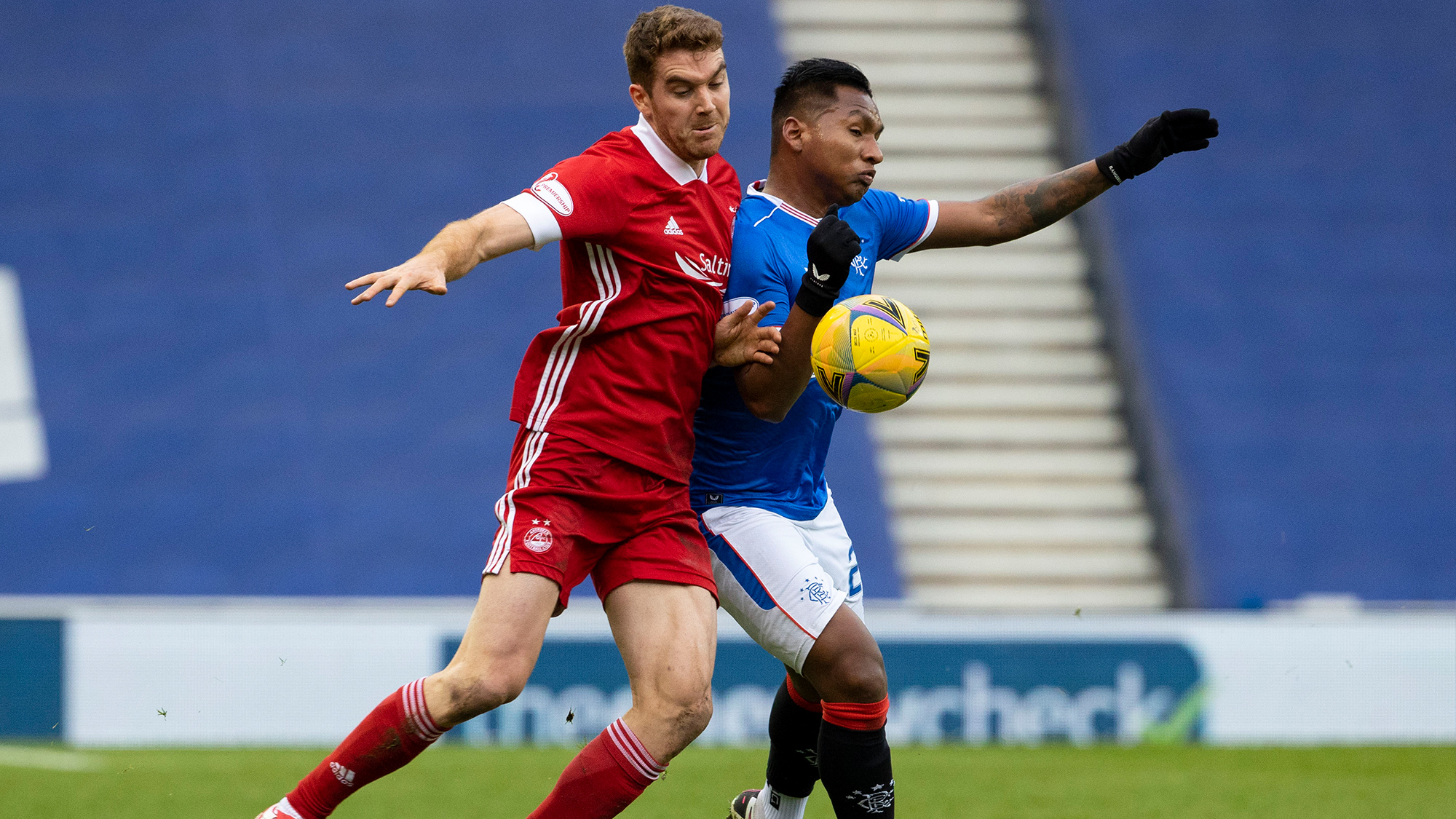 “Rangers know the threats that we pose and will be ready for us. They have got targets themselves. Our target is to win. We are going into a difficult game, but we are going to try and win.

“Steven Gerrard is a young manager who has done really well. He has built something at a massive club. He has gone in and handled a big job and gone through it with flying colours. They have had an unbelievable season. It is about the two teams and showing what we have got and showing an intent.

“Successful Aberdeen teams have won games in Glasgow. That is the aim for the weekend. It is important that we show some intent and show that we are building. I read Steven’s quotes from today that people didn’t think he was the right person for the job when he was appointed as an inexperienced manager. There is a bit of that echoes here as well and long term the aim is to be a successful manager.

“We watched the game back and I stand by what I said afterwards. We created some decent opportunities, we got in good areas. The lads will accept that the quality in the final third needs to be a bit better. The more you get into the box then the more opportunities you get. It is important that we do that against the top teams and that is the challenge at the weekend. We have not had huge amounts of training time. In pre-season we will know what we need to aim at, we know what the players are capable of. With the additions that we are going to bring in, allied to the group of good professionals we have got here, we have got a really great thing to build on. 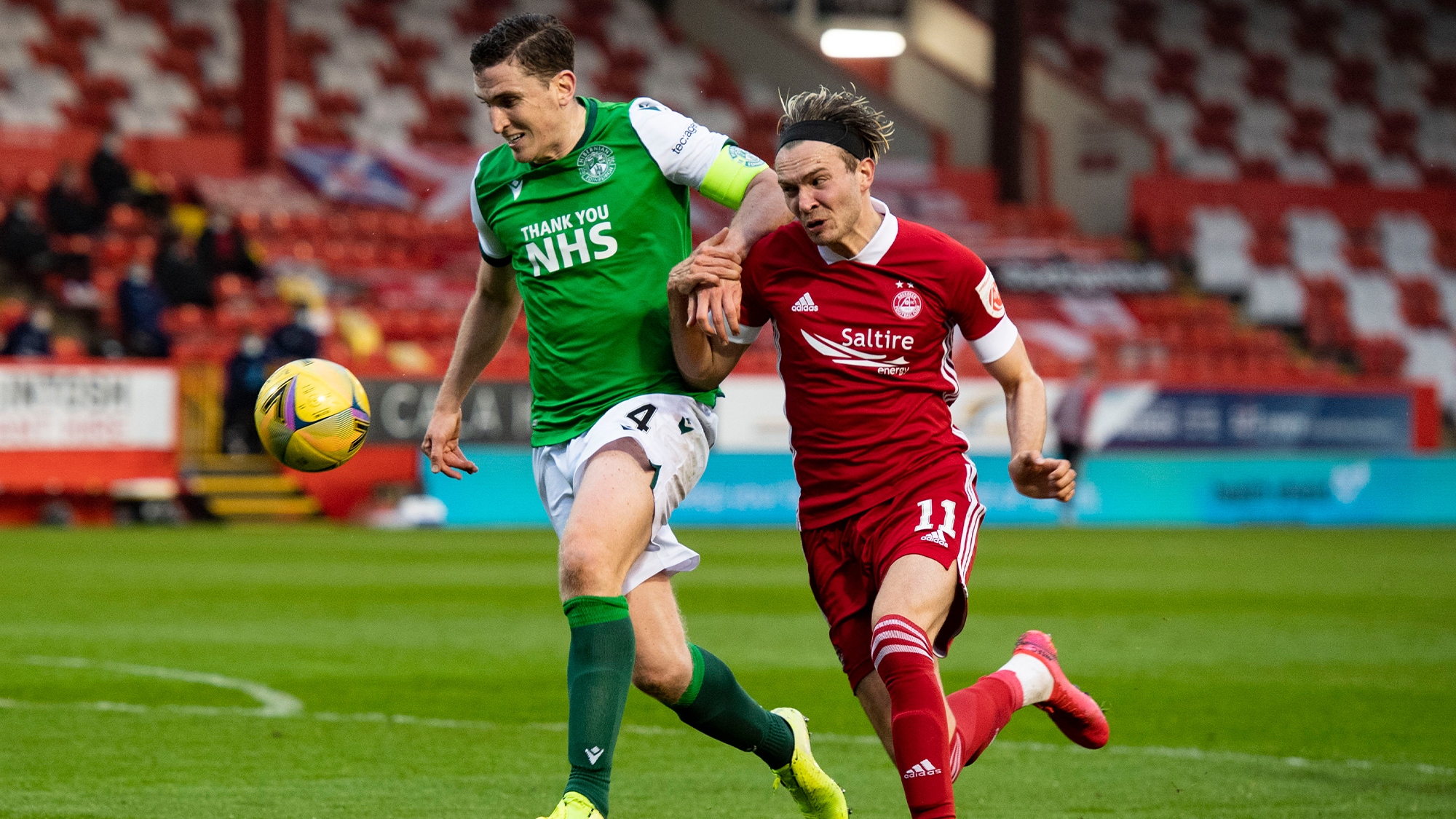 “We have got a great facility here. This year more than any other I don’t see the sense in taking the group away. Even if we go to England or Ireland, you can’t plan now what the rules will be in a couple of months’ time, we would just be guessing.

“We can control what we would do at the facility we have got here; we can alter the environment here to suit ourselves so it is important that we use everything that we can to build for next season. I think staying here gives us that best opportunity.

“The players will get two to three weeks completely off. They will have a couple of weeks of programme to build them into pre-season. They will have five weeks away from the training ground and be ready to hit the ground running back here.” 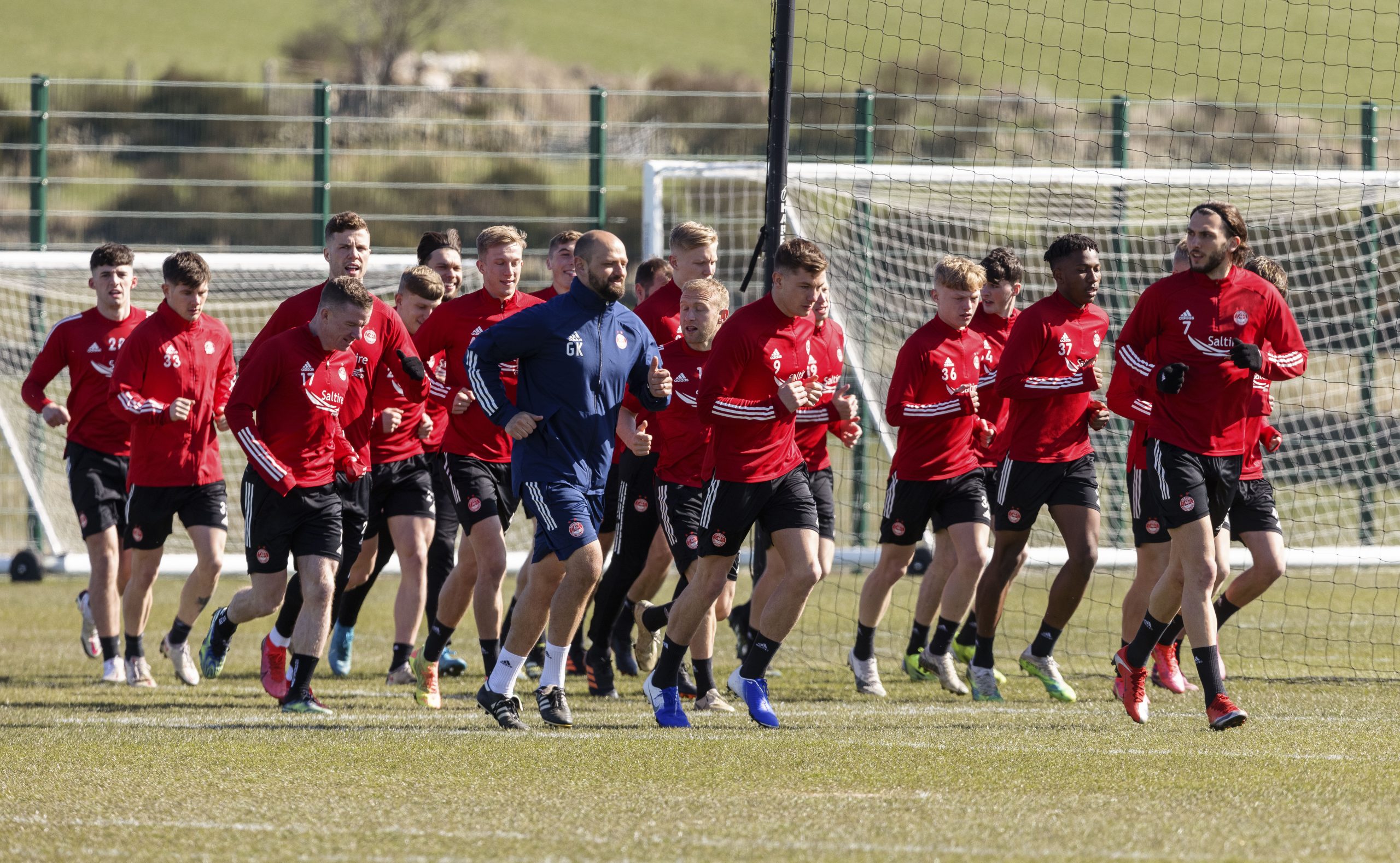 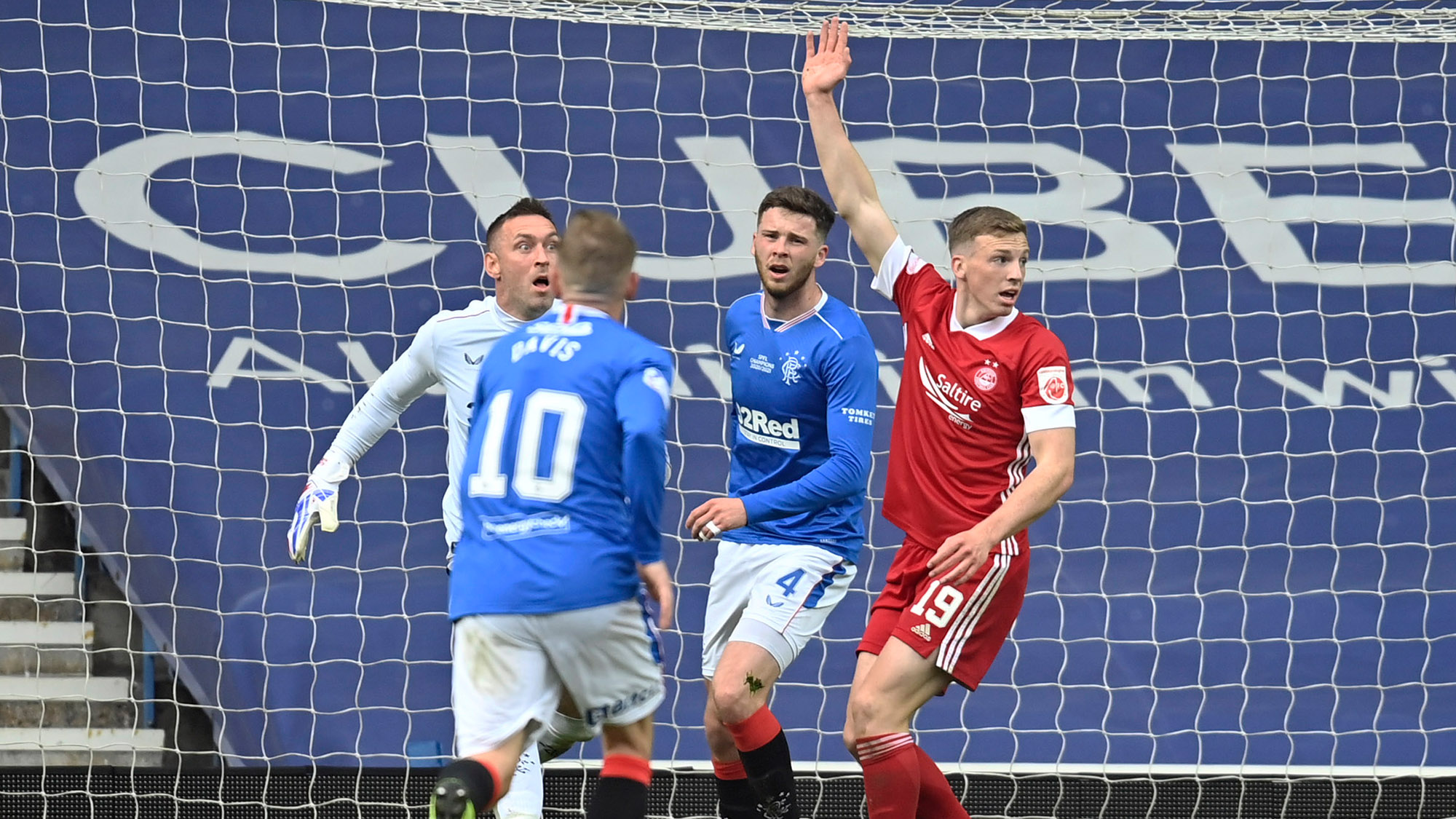 The final game of the season told the story of the whole campaign – the Dons creating and then wasting a string of excellent chances as they slipped to defeat at Ibrox.

Stephen Glass made one change to his starting line up following the 1-0 defeat to Hibernian on Wednesday, Joe Lewis coming back in goal, in place of Gary Woods who picked up a shoulder injury in that game. On the day of his dad’s birthday, Andrew Considine made his 562nd appearance for the club on the 17th anniversary of his debut, moving him fourth in the all-time appearances list above Stewart McKimmie and now only behind Willie Miller, Alex McLeish and Bobby Clark.

Rangers also made just the one goalkeeping change to the side that defeated Livingston 3-0 on Wednesday night, Allan McGregor returning in place of Jon McLaughlin.

Rangers were swiftly into a rhythm, patient passing looking to stretch Aberdeen. In the fifth minute, they were in front, through the most bizarre of goals, Tavernier drilling in a cross that struck MacKenzie on its way through. In trying to cut it out, Lewis got an arm to it as it flashed across goal but only succeeded in scooping the ball into his own net.

Goldson wasn’t far away from a second, getting up at the back post to plant his header just wide of goal from a Rangers corner in the 12th minute as the home side looked to dictate terms.

The Dons responded with some lovely football down the left hand side on the quarter hour involving Kamberi, Hendry and Hedges, the cross just in front of Ferguson as he slid in to try to get a touch. A nice free-kick two minutes later nearly came off in the Rangers box, McGeouch’s low ball dummied by McLennan, Kamberi not quite able to get a shot away as the ball came through to him.

Lewis had to go full stretch to claw away a Tavernier corner in the 25th minute, the Dons having enjoyed a good ten minute spell of keeping the home side at bay. Roofe somehow escaped a booking for a late challenge on Hedges on 29 minutes.

Aberdeen were on the break again on the half hour, Kamberi’s cross blocked behind by Hagi for a corner. Sadly, Hedges’ set play came to nothing.

It was 2-0 and another unlucky deflection off MacKenzie on 34 minutes. Kent went on a surging run after he got a fortunate break of the ball off a McLennan clearance. Getting to the by-line, he pulled the ball back for Roofe whose goalward flick lacked power, but unfortunately it hit MacKenzie on the way through, taking it away from Lewis and in.

McLennan was on the run at the other end two minutes later, a searing burst down the right giving him opportunity to cross, Ferguson running onto the ball but miscuing his shot across goal and wide, a real opportunity for Aberdeen.

Campbell and Hornby came on for Aberdeen at the start of the second half in place of Kamberi and Hendry and the Dons started the half with some measured possession.

Hornby had a golden chance to get his first Aberdeen goal in the 49th minute, MacKenzie setting Hedges away down the left. His cross to the back post saw Hornby darting in unmarked but at the back post, he deflected the ball wide of goal, a great opportunity gone begging.

An intricate free-kick three minutes later saw Hoban getting on the end of a McGeouch cross, his header blocked away, the Dons appealing for a penalty to no avail. Shortly after, McLennan worked a one-two with Hedges before going down under a challenge just inside the box amid rather more hopeful shouts for a penalty.

The crossbar denied Aberdeen in the 56th minute, Ferguson smacking his shot against it from eight yards out when he looked certain to score. It was a beautifully worked move down the left Hedges playing a one-two with Hayes before releasing Hornby who in turn squared the ball for the unmarked Ferguson who will know that he should have deposited it in the net.

Another opening in the 59th minute, Hedges intercepting the ball on the edge of the Rangers area, advancing forward before trying to beat McGregor from a tight angle, the goalkeeper saving with his legs.

The Dons were made to pay for their profligacy on the hour. Hoban gave the ball away with a poor pass across the pitch, Hagi’s nipping in to win it, his interception finding its way into the path of Roofe who buried his shot from 20 yards out to make it 3-0. Rangers then brought on Defoe and Arfield in place of Morelos and Hagi.

More frustration for Aberdeen in the 64th minute, Hedges slaloming beyond two or three Rangers challenges, getting deep into the box, only to be denied by a fine McGregor save. The all came out to Hayes who squared it for Hornby, but his snapshot flashed over.

On 69 minutes, there was another double change for Rangers, Roofe and Kent making way for former Aberdeen men Stewart and Wright. Within a couple of minutes, Stewart swivelled on the edge of the box and pulled his shot just wide. McGinn joined the fray with 15 minutes to go, replacing Hayes before Rangers’ Aribo went down injured, Itten replacing him in the 79th minute.

Six minutes left and Aberdeen were on the break, Ferguson eventually worked into space to get away a shot but McGregor saved it comfortably at his near post. Davis collected the first yellow card of the day after sliding in on McLennan a minute later. Another chance for Aberdeen in the 86th minute, Considine heading a long ball into the path of Ferguson who fed Hornby, but again it was too tight an angle and McGregor made another straightforward stop.

Where the Dons couldn’t score, Rangers were clinical in front of goal and it was 4-0 in the 88th minute. Campbell played a square ball that was cut out by Stewart who fed Defoe. He picked his way past a couple of challenges and deposited the ball beyond Lewis. In the aftermath, Hedges made way for Ramsay in Aberdeen’s last change.